Post here all non technical related topics about Formula One. This includes race results, discussions, testing analysis etc. TV coverage and other personal questions should be in Off topic chat.
59 posts

Well, I have a theory.

The gunman was crouching right at the grassy knoll in Villeneuve curve. The bullet impacted the helmet, ricocheted from it, and cut the data lines. Then ricocheted a second time and broke the suspension arm that finally hit the visor.

Senna sensed the first hit before the arm broke, so he inclined his head to watch the suspension.

However, there was a second gunman hiding in the ARMCO barrier at Traguardo curve. His bullet was the one that hit the base of the skull. The bullet was shoot from the back of the car but hit the helmet right outside its edge, in the base of the neck.

Illuminati don't spare money on assasins. Ergo, it was Mosley.

Senna has promised to devote all the money from the ASF foundation into looking for the Arch of Covenant. The Nazis kew it and they were afraid of the superhuman powers of Senna, so they put a Mayan crystal skull piece inside the helmet. This kind of Mayan magnet, of extraterrestrial origin, attracts lead, as everybody knows.

That's the reason why the bullets were attracted by the helmet, explaining why the gunman (and his accomplice) targeted Senna so easily at top speed.

The accomplices at Williams, a retired KGB doctor and a mechanic who has worked for STASI industrial arm, who participated in Stalin's purges, were able to hide the piece of crystal inside the helment before the race and retired it the confussion following the accident.

This same piece of crystal magnet was used by Mosley to hypnotize delegates into a vote of confidence this very morning.

Clear as crystal. This means that Rubython is a trustful source.
Ciro
Top

Ciro Pabón wrote:Clear as crystal. This means that Rubython is a trustful source.

To add to Ciro's theory: it even explaines why Lewis Hamilton keeps hitting wrong buttons in his McLaren. His fantastic composure suffered a serious crack just before the Chinese GP 2007 when the nazi Mosely threatned to get him assasinated in case the black guy gets too close to F1 crown destined to the superior germans and italians.
:^o
Simracing Club Ukraine
Top

Ciro, your insight into all things political is staggering.

LMFAO!
Heaven: Where the cooks are French, the police are British, the lovers are Greek, the mechanics are German, and it is all organized by the Swiss.

Hell: Where the cooks are British, the police are German, the lovers are Swiss, the mechanics are French, and it is all organized by the Greeks.
Top

Although Ciro´s joke is funny, it´s very difficult to me to laugh when talking about Senna´s death. Even if I´m an ice cold character, the type of person who doesn´t give a f*ck about death, who takes death as a very natural thing that may occur to anyone at anytime. Who can have a picnic in a morgue, or tell a joke to a man thats pointing a .45 to my head. Senna, my friends, was different. I have consciously cried maybe 4 or 5 times in my life and his death was one of them, even if I was 12 years old.

Please don´t let a urban myth ruin the only thing is left from him: his memory.
"You need great passion, because everything you do with great pleasure, you do well." -Juan Manuel Fangio 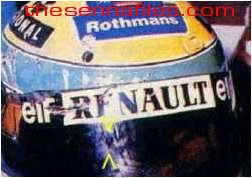 according to Rubython's story the suspension pierced visor and crushed the helmet. 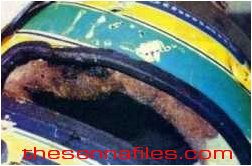 this picture shows the crushed helmet. it is consistent with the story.

the chassis shows tyre marks on the right side

there is no modern head rest and restricting cushion and of course they did not have HANS. so the base skull fracture obviously occurred on impact with the left chassis edge.

a pic of the FW16 suspension, I did not find a top view on the net. the suspension is basically of flat profiles.

the suspension member suspected to have pierced the visor. the sharp end is consistent with the first helmet pic

I would suspect the round hole in the first helmet pic is from manufacturing. could be ventilation. there is a similar thing on the left side that is covered.

This one states "the brakes were fully on". The first post claims that no braking whatsoever was recorded by the data logger.
Simracing Club Ukraine
Top

WhiteBlue wrote: In a 2004 car he would most likely have lived. The helmets were substantially strenghtened.

iirc the Schuberth helmets used these days have near bullet proof visors, to prevent the exact injury that killed Senna.

WhiteBlue wrote: In a 2004 car he would most likely have lived. The helmets were substantially strenghtened.

iirc the Schuberth helmets used these days have near bullet proof visors, to prevent the exact injury that killed Senna.

FIA research led to the FIA 8860 standard introduced in 2004


Head trauma continues to be the most frequent cause of life threatening injury to racing drivers and protecting the driver's head is of prime importance. A head protection system must ensure that any loads or accelerations imparted to the head do not exceed those which may cause injury. The FiA commissioned the Transport Research Laboratory (TRL) in the UK to develop an advanced protective helmet and to propose an improved standard to which Formula-One protective helmets must comply. Throughout the project, TRL worked closely with the FIA Research Group, Carbon Fibre Technologies-UK, Bell Sports Europe and Snell-USA. During a preliminary phase, the performance of current motorsport helmets was evaluated with regard to both laboratory test and simulated accident conditions. Based on this work, provisional performance criteria were agreed for the improved helmet design. During the following phase of the programme, numerous state of the art structural and energy absorbing materials were evaluated. The best solution materials were selected to construct an advanced prototype helmet which demonstrated vastly improved protection within the limits of current geometry and mass. During the final phase, a production version of the advanced helmet was developed in partnership with Bell Sports Europe. The production helmet was shown to provide improved protection in respect of a number of possible injury mechanisms including linear and oblique impacts, crushing loads and penetration. During final evaluation tests an impact safety improvement of 50% was achieved together with a mass reduction of 20%. TRL proposed a draft specification for the new FIA standard (FIA 8860 - 2004) and following the successful homologation of helmets by Bell Sports Europe, Schuberth Engineering and Arai Helmets, the FIA World Council agreed for the compulsory use of helmets to this specification in the FIA Formula One Championship from 1st July 2004.

Story of presentation Monaco 2001 by Mosley

based on these data I would say that visor penetration was improved at least by 30-50%, probably more. the 30% were mentioned for the Helmet itself so the visor improvement was probably much better. Helmet crush integrity was also much inproved.

The FIA Institute for motorsport safety has announced lately that they are working on a new even further improved standard now and that particularly young driver helmets are researched.

Driver helmets are currently made for adults. The standards used to approve them are tested on adults. This project is seeking to create a helmet standard scientifically developed for youths.

Helmets are being designed for all young racing drivers. In order to do this researchers are examining and measuring the growth rate and development of the human head from age six onwards.

This is an important project as adult helmets tend to be heavy and too big for younger drivers. And just making them smaller does not necessarily do the job.

So far research results have defined two helmet shapes and sizes, for 8- to 11- olds and for 12- to 16-year olds, in the prototype work. It will eventually lead to the creation of a Youth Helmet Standard that will have to be attained by all young driver’s helmets.

I love seeing long-winded conspiracies like this. They give me a reason to get up each day and laugh at some sorry sack who thinks the CIA have bugged his house etc.

Thanks for the laugh.

=D> =D> =D> I was thinking along the same lines. Perhaps I'm too polite to say it. but I enjoyed doing some research into the rather absurd claim. I always get material for the quiz that way. BTW what happened to the quiz, Ciro?
Formula One's fundamental ethos is about success coming to those with the most ingenious engineering and best .............................. organization, not to those with the biggest budget. (Dave Richards)
Top

Urban myths, jokes aside, the Senna Foundation's is an outstanding legacy. We may admire him as a driver, but others have been inspired by his example. "The Ayrton Senna Foundation provides the future generations with opportunities for human development."

Excuse me for getting all serious and earnest. Sometimes the bullshit on these threads stinks. Some people deserve better. Ayrton Senna deserves better.
____________
Rand Gibbons
Top

I aint sure that he has murdered, but it is possible why does he turn in normally with no problems and at the half of the turn you see his head swing to the left side lifeless and he drives straight ahead into the barriers. Explain me why he turns in normally and his head movements are normal and then his head swings to the left and he drives straight into the barriers with no turning anymore
I have a movie that shows it:
http://www.youtube.com/watch?v=q5g7OSc5V-o
"Bite my shiny metal ass" - Bender
Top

You have a disturbingly vivid imagination, wesley123.

Why do you say his head movement is "lifeless"? Just where did you get that idea? If you check the tape very carefully, the moment he tilts the head is the moment he turns the steering wheel fully because the car started to understeer off the track. To do that an F1 driver must cross the arms, and probably tilt the upper body and therefore the head as well. It's hard to say what happened exactly from the video, but why go for an out of the world explanation when a very straightforward one is readily available.
Top
59 posts