A place to discuss the characteristics of the cars in Formula One, both current as well as historical. Laptimes, driver worshipping and team chatter does not belong here.
752 posts

SauberF1 wrote:
The F1 technical regulations have barely changed going into the 2013 season and yet the new Sauber C32-Ferrari is a very different proposition visually from its predecessor – thanks to a smooth, slightly downward-sloping nose section and, principally, much slimmer sidepods.

“The C31 was an extremely competitive car with many strengths,” explained Matt Morris, the Sauber F1 Team’s Chief Designer. Our aim was to further improve these strengths and eliminate its few weaknesses.

“Over the course of last season we invested a lot of time and energy in developing a better understanding of our car. To this end, we focused primarily on the aerodynamic effects around the rear of the car. Our aero experts have done some great work in this respect, the basis of which has been used to develop the C32.”

Radical changes have also been conspicuous by their absence when it comes to tyres. “We had the opportunity to test with the new generation of tyres at the last race of the 2012 season at Interlagos,” said Morris. “Although there are some differences in the construction of the tyres, as a whole the changes are minimal, which means there was no need for a fundamental redevelopment in this area.”

Front end
A year ago almost all the cars on the grid had one particular feature in common: a stepped nose. This design element caused an outcry among many fans, but was rendered nigh-on unavoidable by the regulations. For 2013, the FIA has now allowed a cosmetic fairing to be used in this area, while retaining the current chassis and structural nose height regulations.

The nose now sweeps down smoothly towards the track, which not only improves the car’s looks, but, more significantly, enhances the aerodynamics of the front end.

With the front wing, the aerodynamicists have put their faith in a proven formula, further optimising last year’s development and thus improving its aerodynamic efficiency.

The engineers also remained true to the basic concept of the front suspension, carrying out only minor adjustments.

Central section
The sidepods of the C32 are notably slimmer than the Formula One norm up to now and are responsible for giving the new car a very distinctive look. “The airflow in this area has a major influence over everything that happens at the rear of the car,” said Morris, offering a glimpse into the team’s thinking.

The significantly reduced volume of the sidepods over conventional variants makes packaging a particular challenge. Even the smallest empty space has been used to accommodate the countless components.

An extremely slim rear end was high up the engineers’ list of priorities. One of the key aspects here is the arrangement of the radiators, which is very different from that in the C31. A look at the rear end of the new car reveals the engineers’ rigorous approach to this area.

Morris said: “It is one thing the aerodynamicists coming up with great ideas, but they are often difficult to make into reality. In this respect, the design and production team has done a fantastic job on the side pods, both from a structural and packaging perspective.”

The aerodynamicists have also invested a lot of time developing the details around the exhaust exits – an area which has a major impact on performance and in which the Sauber F1 Team was one of the leading exponents last season.

As before, the car’s KERS (Kinetic Energy Recovery System), engine and gearbox are supplied by Ferrari. The KERS is based on last year’s version, but its weight and packaging volume have been optimised.

Rear
The rear axle is a totally new development. Although it still works according to the pullrod principle, its layout has been designed to better interact with the airflow around the rear of the car, while further improving the tyre management.

There is also potential for improvement in how the tyres are used in qualifying, as Morris explained: “Our car looked after its tyres very well during races last year. However, we had problems now and again when it came to getting the maximum out of them in qualifying. We’ve looked at this phenomenon closely and made the required adjustments.”

Double DRS systems are banned in this year’s technical regulations and the sporting regulations now stipulate that, during qualifying, DRS can only be activated in those areas of the circuit where it is permitted during the race. The demands placed on the aerodynamic efficiency and rear wing design, are therefore slightly different now. “We expect this to be an area where we see various developments introduced over the course of the season,” said Morris.

Another high priority was reducing the car’s overall component weight, to allow a better distribution of the ballast, while retaining its structural requirements and mechanical setup flexibility. “My colleagues have done an excellent job here, and we have even exceeded our original targets”, praised Morris.

Like last year, the Sauber F1 Team will use a basic version of the car for its rollout event and introduce a major update before the first race of the season.

“We have set ourselves lofty goals with the Sauber C32-Ferrari, and I’m confident that we’ll be able to meet them. The C31 gave us a very good basis, to which we’ve made further improvements. Our aim is to line up for 2013 with a car that is competitive from the first race, but which also offers extensive potential for further development,” summed up Morris.

Another hi-res photos of the car:

It's been a long time since we drove last time, but it has also been a short time at the same time
Roam Grosjean ponders the passing of time on the first day of testing at Jerez
February 5, 2013
Top

wow, those side pods are sooo slim o.O looks like an anorexic chick compared to the others... how did they manage that?! :O
Visit my photo page! -> http://www.gorankphoto.com/formula1
Top

Oh my, the car is nice, but the livery...
I get a bad feeling from the HRT resemblance.
Top

They dropped the hole in the nose as far as I can see? Weird, that was one of the more interesting features of last year´s car. Also the pioneers of exhaust ramp ditched it, im worrying about lotus now. It would be funny if red bull dropped it too...
Top

Most innovative car until now. By far.
#AeroFrodo
Top 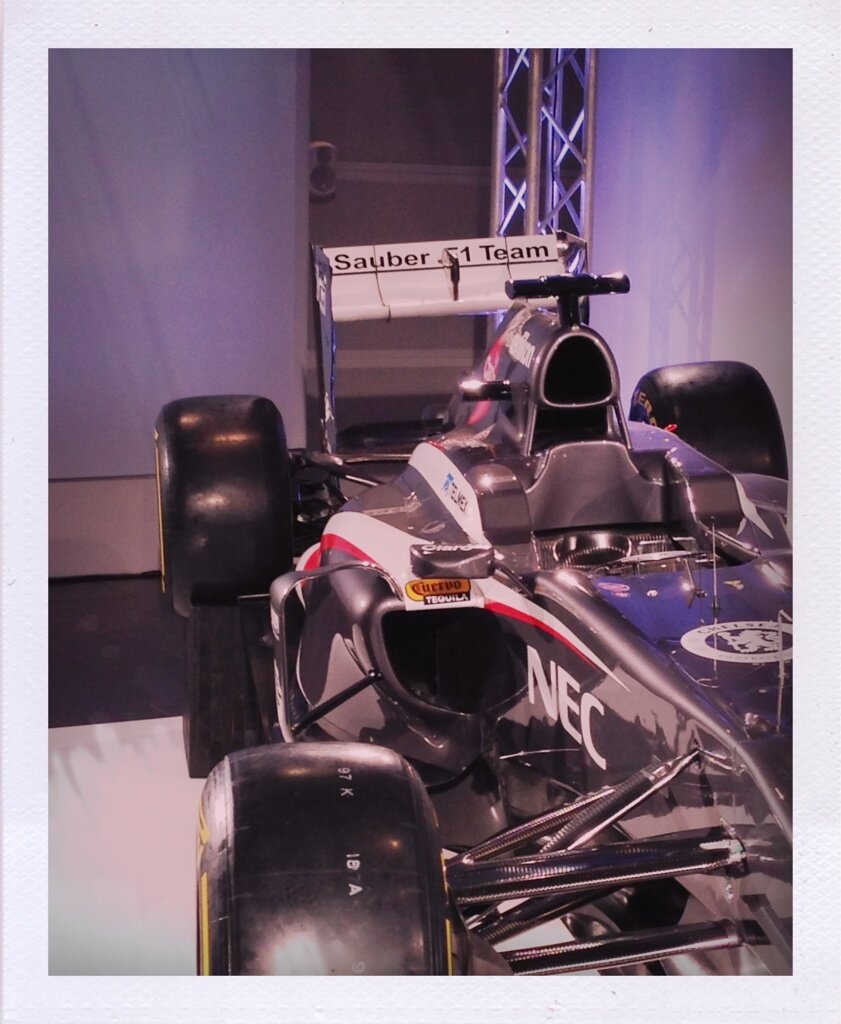 thomas butler ‏@tommytakesphoto
"...and there, very much in flames, is Jacques Laffite's Ligier. That's obviously a turbo blaze, and of course, Laffite will be able to see that conflagration in his mirrors... he is coolly parking the car somewhere safe." Murray Walker, San Marino 1985
Top

Internal packaging must be crazy, can't wait to see this car opened.
Top

the sidepods are very slim at the top..and normal-ish at the bottom..there is also a step between the sidepod the the semi-coanda exhaust ramp

edit: the car will most certainly feature a DRD
http://technicalf1explained.blogspot.com/
Top

I highly doubt any of these launch cars have an engine fitted or much of the internals for that matter. I guess if one wanted to they could make cheap bodywork for the launch that was nothing like what they will run at the first test. Not to say sauber are doing that but damn those side pods are tiny.
Top

So they have like a step but a step with sidewalls or how you would call it. Pretty fukkn nice but shame on the paint getting bad HRT vibes from 10.
Top

Lurk wrote:Internal packaging must be crazy, can't wait to see this car opened.

If it can be opened at all!

That is true. I have always loved the Swiss Team's innovative designs.. It would be nice if they had a year end design awards, like the movies do.

Those side-pods are just crazy, man. I still can't wrap my head around how they will get those tiny radiators to cool anything at all!
Not driving a Mercedes? Work harder!
Top

Lurk wrote:Internal packaging must be crazy, can't wait to see this car opened.

If it can be opened at all!

Part of the reason they managed to get this kind of packaging is the Ferrari engine which every year seems to require less and less cooling..They are achieving this partly because of their partnership with shell...The ferrari sidepods have become a bit smaller this year compared to last year..and they were already small last year...despite some people thinking that they are big they are actually very small..it is their bulging front that makes them look big...sauber though seems to have taken it a step further...ferrari has hinted in development sidepod bodywork to come for testing...lets keep an eye on the STR too..
http://technicalf1explained.blogspot.com/
Top

Those side-pods are just crazy, man. I still can't wrap my head around how they will get those tiny radiators to cool anything at all!

Can we still call those sidepods? If anything, they're subtlepods.
Top
752 posts