A place to discuss the characteristics of the cars in Formula One, both current as well as historical. Laptimes, driver worshipping and team chatter does not belong here.
390 posts

Vettel has been complaining about the rear in 2014. It is quite strange because the RedBulls are known to have high rear grip with a predictable behavior. Maybe he is so used to it, he cannot feel confident without the rear being predictable. Kimi on the other hand cannot feel confident without a precise front end. He performed very bad when the tyres begun to grain. Overall the two have similar balance preferences, they both prefer a slightly nose heavy car, but the key differentiators is that one prefers a predictable front and the other a predictable rear. These two are going to be total opposites of the tyre life spectrum. Vettel fast at the beginning of stints and kimi fast at the end.

According to you their requirements are more or less easy to match with a project respect to kimi vs alonso ones?
I'm still learning English so please excuse me if my English is not good enough and feel free to correct me via PM if you want.
Top

Alonso is an enigma to me. The unique way he handled those michelin shod Renaults with his agressive turn in to induce understeer made people brand him as a driver who prefers the rear to be on rails and a front that he can shuffle commiting to the apex very early. As just a regular fan i am not so sure. I think that was simply the fastest way to drive those Renaults.

He has never come out on record and said what balance he prefers. In fact he beatifully drifted his Mclaren which was built on decades of input from hakkinen and raikkonen. Hamilton had came out and said that he and Alonso required different things from the car, but was not it ironic that Hamilton was cheerfully using an identical car with Alonso's base setups for half the season? I think Alonso can drive the car the fastest way. I don't think ballance unsettles him. I am also one of the people that believ that a car cannot be tailored to a driver from the drawing board.

The dreaded F14T had many oversteer on exit moments over the year . It is something no driver likes. I cannot say for sure that the handling charasteristic of that car was a failed attempt to engineer the suspension, differential and aerobalance for Alonso. I think is a shot in the dark actually. Haha. Kimi also did not get a custom front suspension or steering rack like he had done mid season at lotus, ferrari in 2009 and Mclaren. So it is clear to me that if the suspension geometry was the real problem Ferrari are smart enough and rich enough to change it for him. That was not the case though so I personally have ruled out that Alonso DNA is in the F14T.

I heard that Arrivabene has fired the 2015 car. He decided it was not performing at the needed level in simulation so it was released. Arrivabene will design the replacement and also possibly drive it depending on the attitude and committment of Vettel and Raikonen.
Top 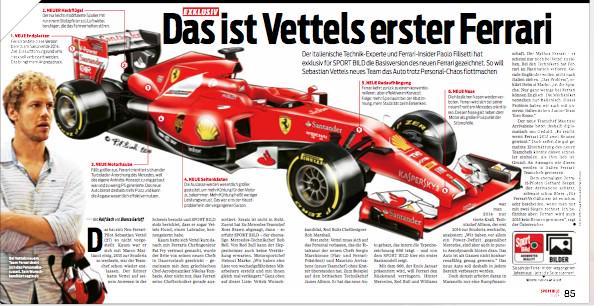 "I have no idols. I admire work, dedication & competence."
Top

Can I ask where did you find this?
Top

Can I ask where did you find this?

You can find it here
https://twitter.com/bgarloff

Those mid waist hot air exhausts are a design feature that fry brought over from mclaren. I don't think those will be on the new car. It has characterized all the ferrari f1s under fry, and i always saw it as some aerodynamically neutral philosophy he was pushing. It cleared up the floor of the car, while not creating lift due to it's shape. However it still occupied space in the middle of the car and must have some downstream effects on the air flow.
For Sure!!
Top

@ringo
I agree. And than still, those were modified on F14-T mid-season to extend through rear suspension components influenced by Mercedes' design.
Top

Merc's "u" nose is illegal in 015 so I doubt that's a valid direction. Going split turbo and log exhaust should allow smaller top body? I know Ferrari will require larger cooling in 015 and thus side pods will be bigger
Top

One question. Maybe silly, but why teams opted for log style exhaust? Are they trying to reduce cooling requirements with gaining less output from cylinders thus less heat? Thanks
Top

One thing not mentioned in the De Luca speculation is the lower front wishbones-- will they be the Mercedes-style narrow-base or a more conventional wide-base? If noses were staying the same then for sure everyone would go to Mercedes-style wishbones, but it's not clear if the narrow-base is still advantageous with the 2015 lower noses.
Top

F1NAC wrote:One question. Maybe silly, but why teams opted for log style exhaust? Are they trying to reduce cooling requirements with gaining less output from cylinders thus less heat? Thanks