A place to discuss the characteristics of the cars in Formula One, both current as well as historical. Laptimes, driver worshipping and team chatter does not belong here.
600 posts

Muulka wrote:
Totally incorrect- all the car's downforce is proportional to the square of the car's speed. Doesn't matter if it's underbody or aerofoil lift, it all increases the same way. The reason you don't get high- and low-downforce floors is that the floor DF is much more efficient in terms of drag- you wouldn't gain much straight line speed from having a worse floor, but you sure would lose an awful lot of grip. The rear wing has a much bigger effect on top speed, and as such that is the component they change to adjust the overall level of downforce.

Thirdly, about having a "low downforce floor/diffuser," the teams can tune their diffuser with rear ride height, rake angles and how much they allow their car to squat under certain aerodynamic loads.

None of that is inherent to the method of producing DF; the changing properties of the aero parts Under different conditions experienced through a lap. is very carefully controlled through the many, many setup tools which are available (for instance, the clever hydraulic suspension systems can be adjusted a great deal to better orient the car's aero. . There is nothing at all about a diffuser which makes it inherently more efficient at different speeds.

As for the interactions of the different components, that is very much a second-order effect. And besides, the vast majority of that interaction is independent of speed.

So this theory boils down to looking at things which are either second order to second order effects or tunable parameters.

My point was not arguing what is more efficient or less efficient. My point was that you can't simply say that drag always scales like that. I was saying that the car squatting at speed changes the Cl and Cd numbers at the diffuser and rear wing versus if the car didn't have suspension and the ride height and rake of the diffuser and angle of the rear wing didn't change. Or if the front wing didn't flew at all.

You are thinking in theoretical models, the problem is that in reality as the car squats it will change the cars drag for that speed vs a car that didn't squat.
Top

I agree on that - almost all of the downforce is coming from the sprung part of the car, which makes those aero devices 'sprung' as well: they change their vector according to the squating. The formula referred to, is only true on a static aerofoil with a static vector. Those change according to aerodynamic load, mostly (but not exclusively) depending on the car speed.
#AeroFrodo
Top

Do we see a new engine cover in this picture from todays tweet? 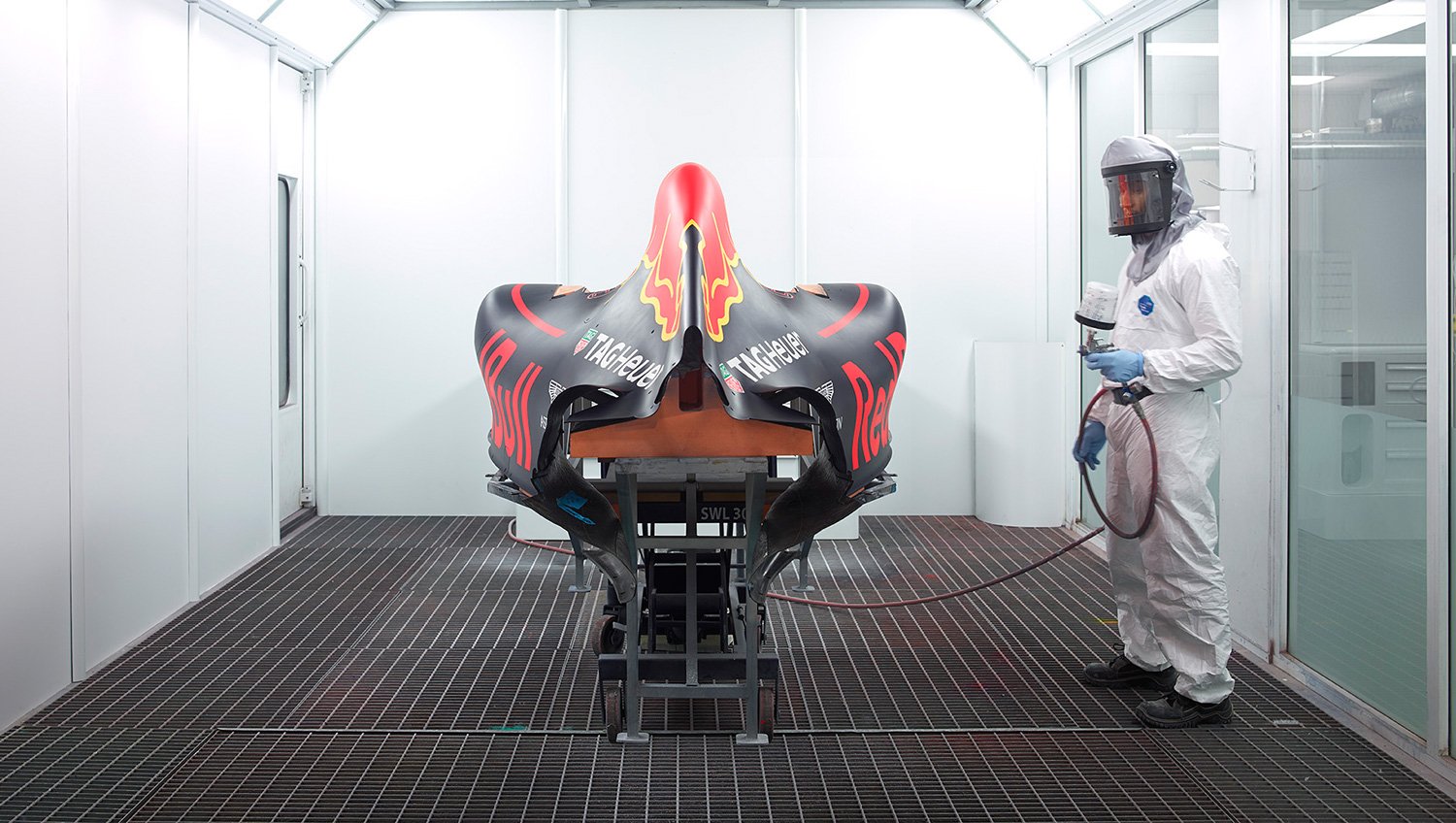 I can't remember the cut-outs that partly cover the Aston Martin logo in this picture.
Top

Yep, extra cooling outlet either side to cope with the heat and humidity of Malaysia.
Top

What is he painting, if there are already stickers on it?
Top

gastonmazzacane wrote:What is he painting, if there are already stickers on it? 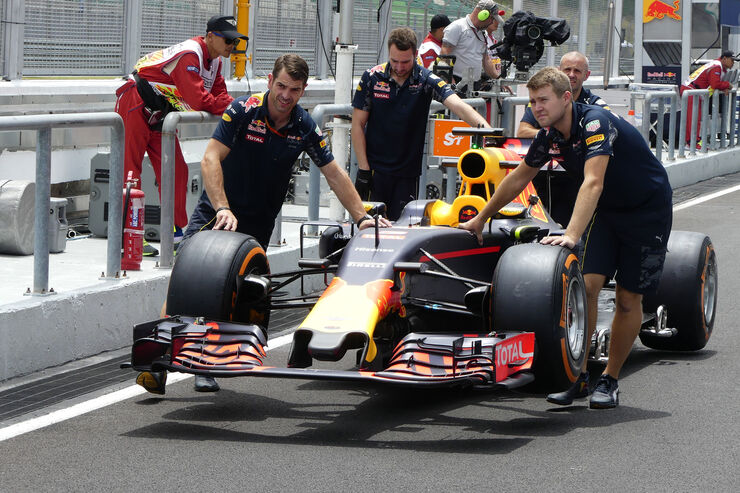 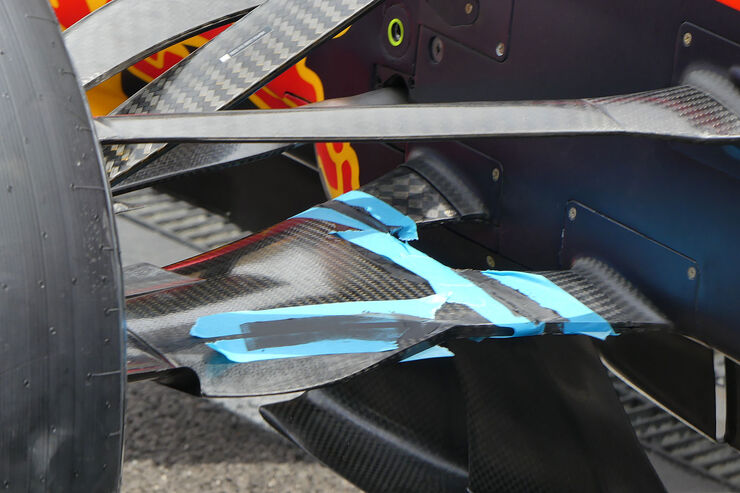 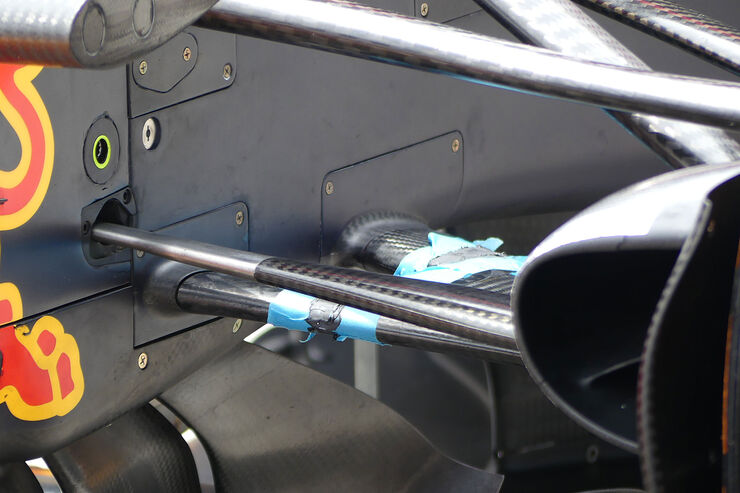 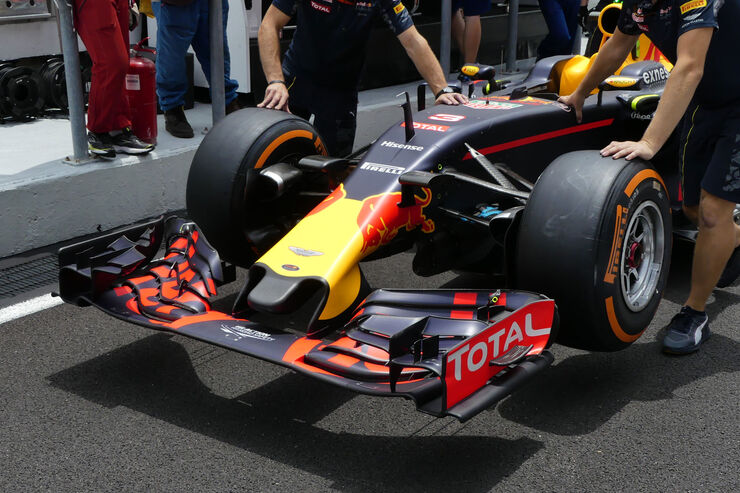 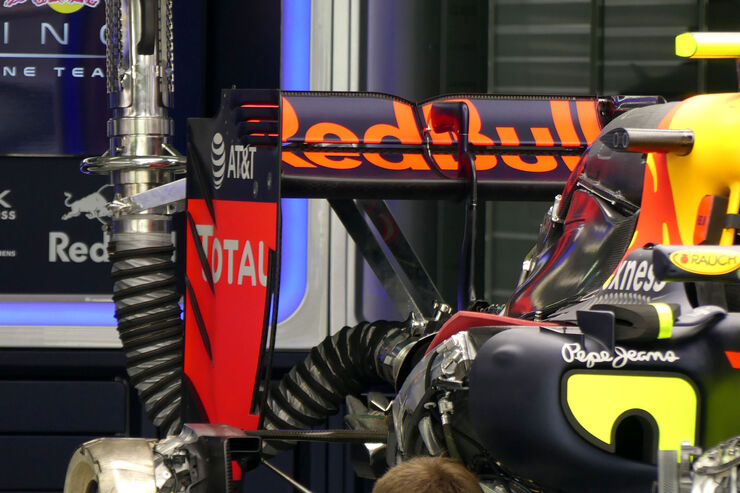 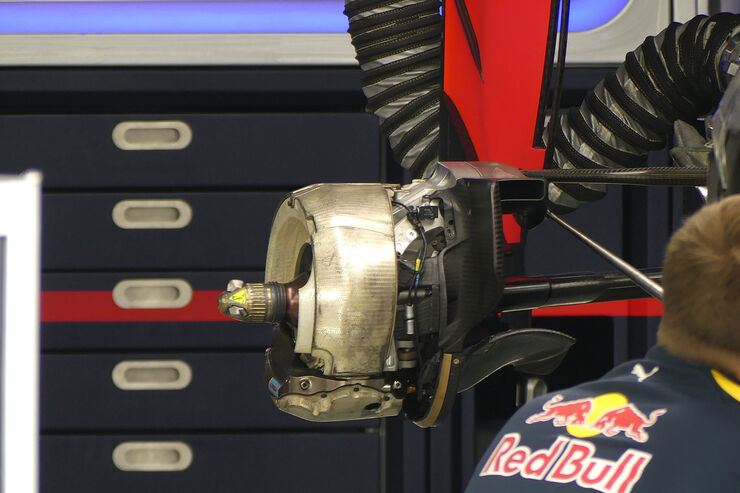 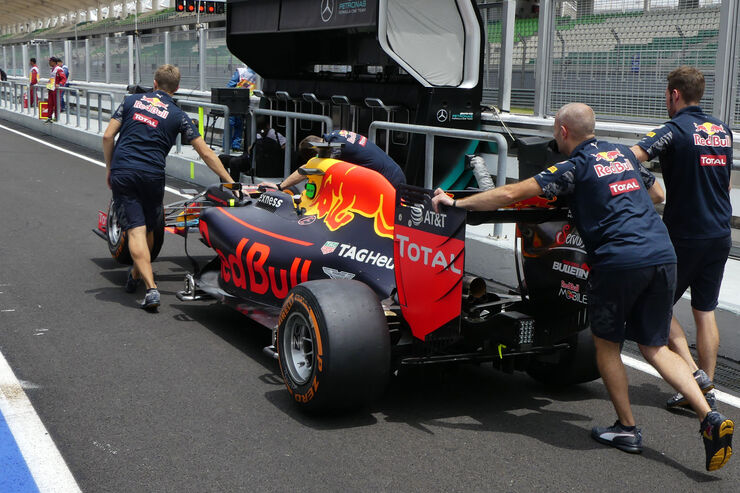 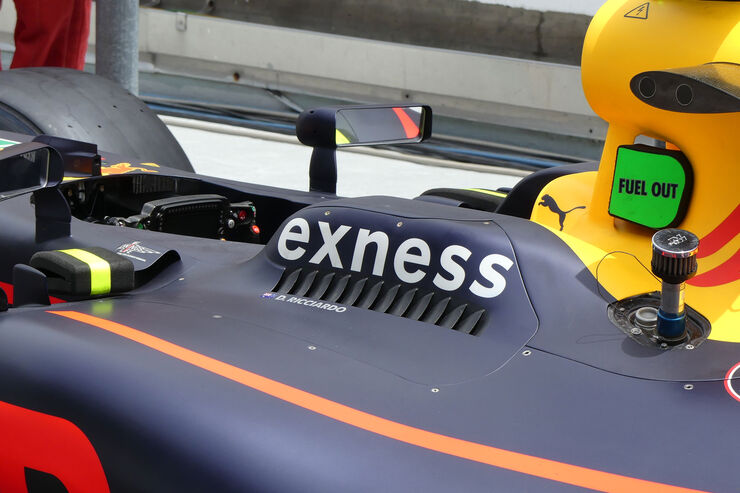 Why are the trailing edge of the wishbones and connection rods so thick on the Red Bull? Surely there will be some turbulence when the overside and underside airflow are mixing together again behind the wishbones etc?

Red Bull (using a picture from Morteza:s post) the traling edge on the lower wishbone and trailing edge of the upper/front wishbone looks really thick, in comparison to Mercedes atleast 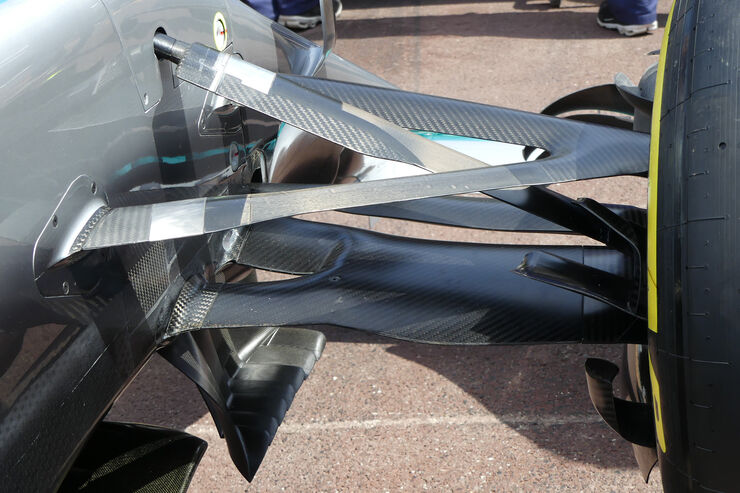 JesperA wrote:Why are the trailing edge of the wishbones and connection rods so thick on the Red Bull? Surely there will be some turbulence when the overside and underside airflow are mixing together again behind the wishbones etc?

Red Bull (using a picture from Morteza:s post) the traling edge on the lower wishbone and trailing edge of the upper/front wishbone looks really thick, in comparison to Mercedes atleast

Can you please explain what makes you think that mate ?
Cheers
Top

Can you please explain what makes you think that mate ?
Cheers

Entire hubs are wrapped in that gold coating.
Top

I was just being qdventerous.. But really i dont even know if on board brake heating devices are legal. But that brake covering is certainly designed for high temperatures from inside to outside. Normally the brake covers are just regular looking" carbon fibre on the outside meaning that they dont see extreme temepratures.
Possibly those "cake tins" generate heat till they are red hot....?
Not driving a Mercedes? Work harder!
Top
600 posts