iichel wrote: ↑
Thu Sep 14, 2017 9:10 pm
well it looks like they are put further lateral, compared to pre-hungary. quite a lot if you look at an overlayed image:

The only reason they'd do it, is because it probably favours the airflow further downstream.

Could also be packaging of electronics in the mirrors. New or upgraded sensors might could require different housings, which of course would be aero considered.

Yes that would explain the new shape, but not the new position.
Top

Q: Can you confirm exactly which teams you'll be supplying with engines from 2019 onwards?

CA: Before 2019 there is 2018. And 2018 it is very clear those two gentlemen on my right, and one thing I must stress is they will get equity, and perfect parity of treatment between the Renault works team, McLaren and Red Bull…

ZB: You said we were going to get better stuff!

CA: Oh yeah! Sorry! This is a public one! So, this is something that matters. And in relation to 2019, obviously with McLaren today we are announcing a three-year partnership until 2020 and the rest, obviously, is a bit of speculation at this point in time with Red Bull Racing.

Q: OK, Christian, coming to you, what is Red Bull's plan for engines form 2019 onwards? I understand that you alluded to this on TV earlier today.

Christian HORNER: No, I think what you are referring to, I was asked a question about Porsche coming in Formula One and I answered that very clearly that we have an existing relationship with an OEM that don't make Formula One engines and obviously, that will continue. We are absolutely delighted for Toro Rosso with their Honda announcement. I think it's great news for Toro Rosso, it's great news for Honda, it's great that they're continuing with Formula One. Obviously, it's facilitated that Zak has managed to get the Renault engine that he was craving and Carlos Sainz gets to further his career obviously in Cyril's team while also remaining part of the Red Bull family. So, I think you have a rare occasion in Formula One where everybody's happy.

Q: Does any of this make your job more difficult in securing the long-term commitment to Red Bull Racing of Max Verstappen and Daniel Ricciardo?

CH: Well, both of our drivers are currently under contract at least for next year and it's down to us to produce a good car, be competitive and then, of course, why would the drivers want to be anywhere else? We're obviously not short of options on drivers but obviously, our preference is absolutely to retain the two that we have in the car at the moment.

Q: And just a final quick through from you, very strong performance today, particularly in FP2. Daniel was in here yesterday and he said he thought he might have a chance of winning this race. Does everything you've seen today – short runs, long runs – give you a bit of encouragement on that front.

CH: I think both guys have had a strong day today, particularly Daniel this evening had a strong session – but we didn't really see Ferrari's true hand, particularly on the short runs, and Mercedes always hold a bit up their sleeves – but it's been certainly a positive day. I think Daniel's invigorated by his new haircut that he turned up with the other day and obviously been using that air conditioning to good effect.

Q: (David Croft – Sky Sports F1) Cyril, Christian, I'm confused. The story is out there, you've not denied it but you're not confirming it either, so on behalf of everyone who wants a straight answer to a straight question: are Renault supplying engines to Red Bull in 2019 or not?

CH: Well, look David, anything that is beyond '18 is speculation, so it's neither confirming nor denying. So the situation for '18 is absolutely clear. Anything beyond that will be dealt with behind closed doors, not through the media in terms of what will be the future, so I think the situation post '18 is very clear. Our focus at the moment is on designing the best car we can for '18. We will have a TAG Heuer Renault-provided engine and that will be the case for next year. Anything beyond that is speculation, conjecture, and there will be all kinds of rumours, I'm sure, between now and then.

CA: Nothing to add.

Q: (Chris Medland – Racer) Christian, when McLaren-Honda partnered, I think it was Ron who said that the only way to win championships was to have a works partnership. Do you think that's going to be the case, going through to the end of 2020 and how difficult is it going to be to change beyond the end of 2020?

CH: As I said earlier, I think everybody's genuinely happy and excited about Honda remaining in Formula One. I think it's great news for Toro Rosso, I think it's great news for Honda and we'll certainly be paying very close interest to that. I think that the engine is too much of a performance differentiator in Formula One as it currently stands and it's wrong that manufacturers and teams find themselves in this situation. I just hope that moving forward… Ross seems to have a really good group of people around him. He seems to be working very well with the FIA to come up with a sensible set of regulations that control costs, of development that controls effectively the spread of performance, controls the supply price to customers and creates a more level playing field than we've seen since the introduction of these regulations that have been - really since they've been introduced in 2014 - have been extremely divisive and haven't really added to Formula One that I can see in any way.

Renault does not want to play the third violin

The press releases are silent on the Red Bull and Renault case. Because he does not need any communication. The contract between Red Bull and Renault ends with the 2018 season. Renault does not have to cancel Red Bull. It is enough that they have told Red Bull not to be available as a motor partner in 2019 anymore. This means that Red Bull falls automatically into the hands of Honda. Because Honda then supplies only one team and is, according to the Sports Regulations, the first stop for a team without an engine.

Renault and Red Bull do not officially comment on their divorce. "In the future, we want to be captain on our steamer and determine ourselves by teams and drivers," says the French automobile manufacturer. "Renault can not be interested in playing the third violin in the medium term behind us and McLaren. The team has sold a five-year plan to the board, with the end of the world championship. Since they can not use internal competition, "Red Bull sells the liberation strike of the French.

If one can believe the rumors, then Renault was tired of the hidden criticism of his client. And when the question of whether Red Bull 2019 planned with Renault or Honda engines was not a firm confession, executive director Carlos Ghosn tore the patience. In this case not with us, it was said from Paris.

Red Bull tells the story in a slightly different tone. Renault wanted to take the decision in the event that Honda suddenly became a more attractive option for Red Bull, the Japanese should solve their technical problems. It would be bad for the image, if Red Bull decided then for Honda. So better to create facts before it comes to that.

Red Bull is now handed over to Honda. One must pray that the development department in Sakura use the next one and a half years to create the connection to Mercedes and Ferrari. Renault had the same problem, says Red Bull without mercy. That is why you are not afraid that Daniel Ricciardo and Max Verstappen are already looking for a place to go. "It's not that they have huge confidence in Renault."

Red Bull team boss Christian Horner sees good signs that Honda gets the turn. "At Toro Rosso, the pressure is smaller than at McLaren. Honda will be able to work with Toro Rosso in peace of his problems. Nobody expects the world title of Toro Rosso-Honda. "

Red Bull sees another advantage. A work contract with Honda will save the two teams 42 million euros and probably still a healthy development grant to the cash. This money will allow Red Bull and Toro Rosso to invest in their chassis.

Merc-Monza: (although I don't know since when they have this arrangement)
https://i.imgur.com/iDIXMzh.png

So recently RBR have taken cues from Mercedes with the mirrors and vanes on the leading edge of the floor, as will as cues from Ferrari with the new bargeboards.
Top 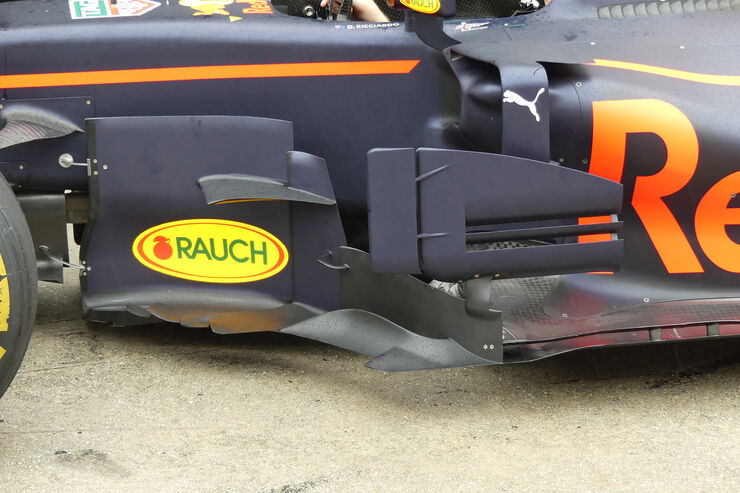 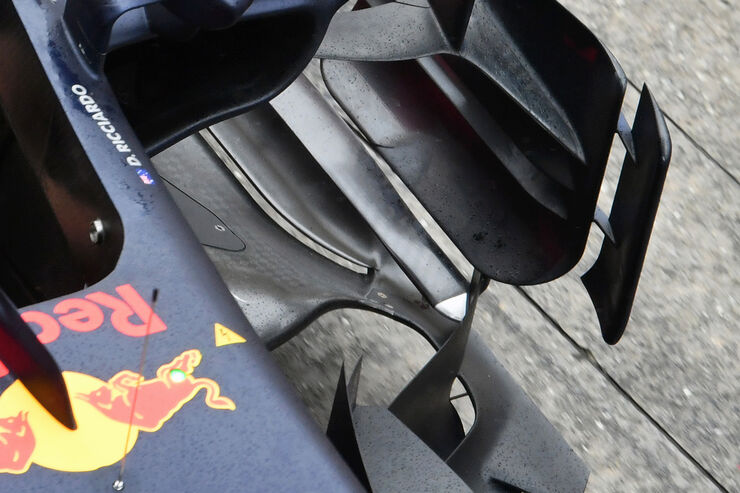 It appears as though with Max's win today that RBR have finally sorted their chassis. 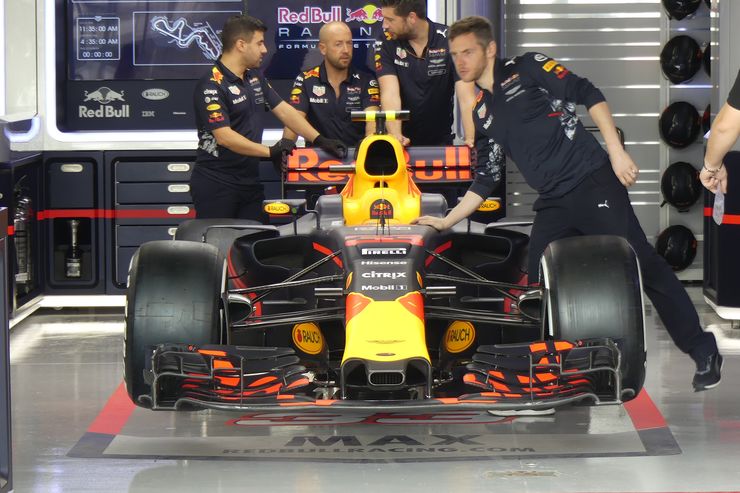 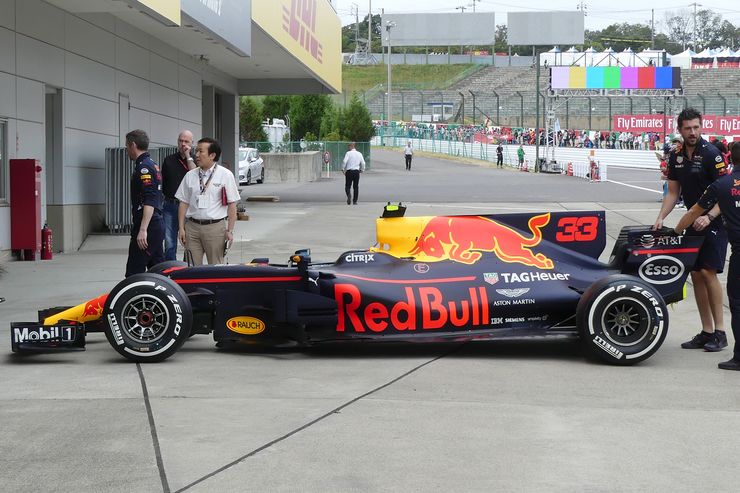 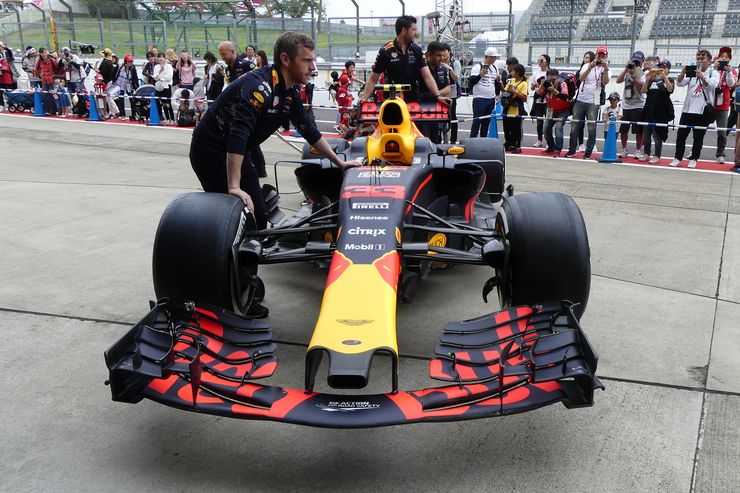 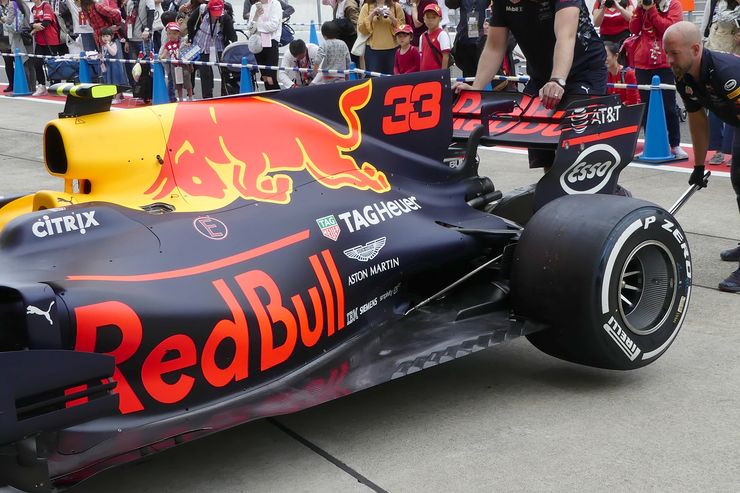 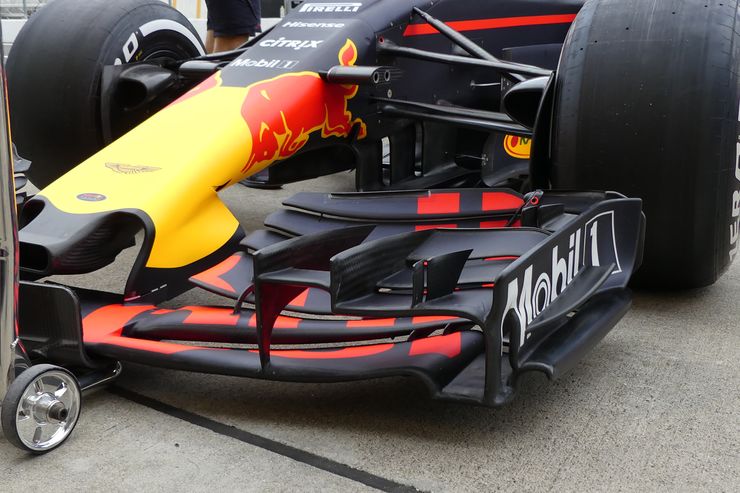 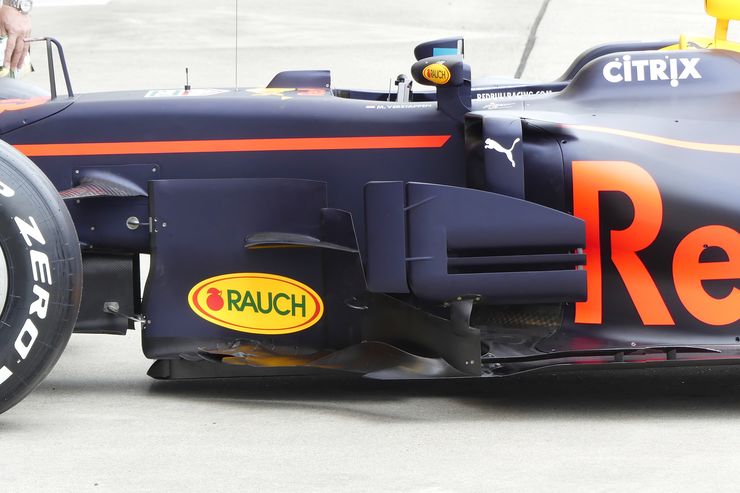 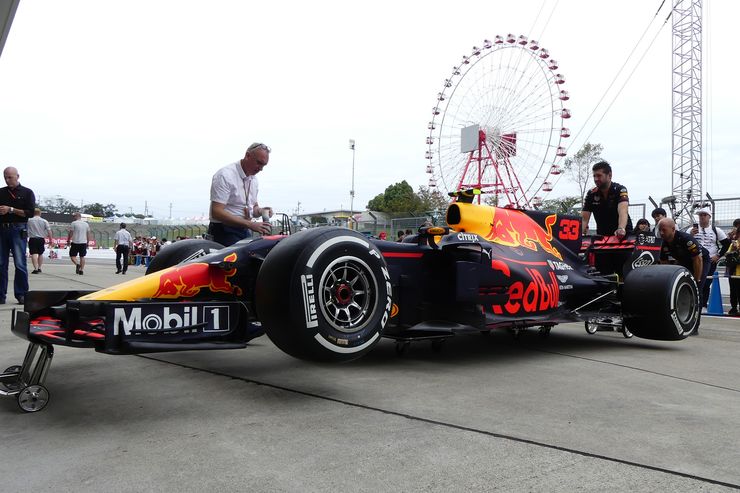 This car is getting very advanced.
The front wing endplate is quite interesting with the gap near the leading edge.

No other team is doing this also:

the footplate is split, with the outside part being on a higher plane.
For Sure!!
Top 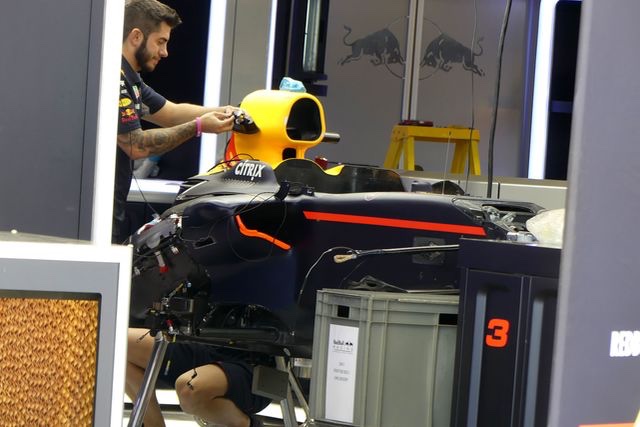 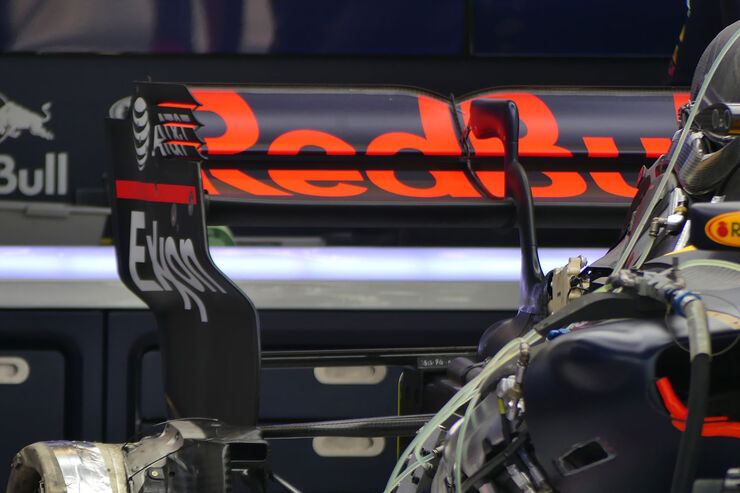 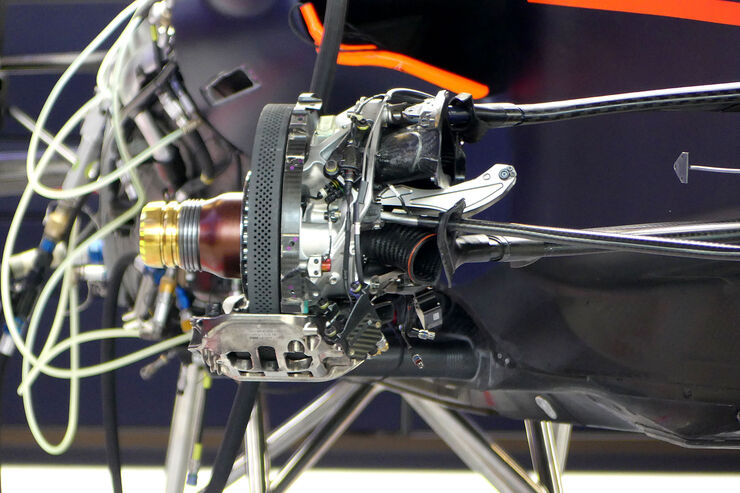 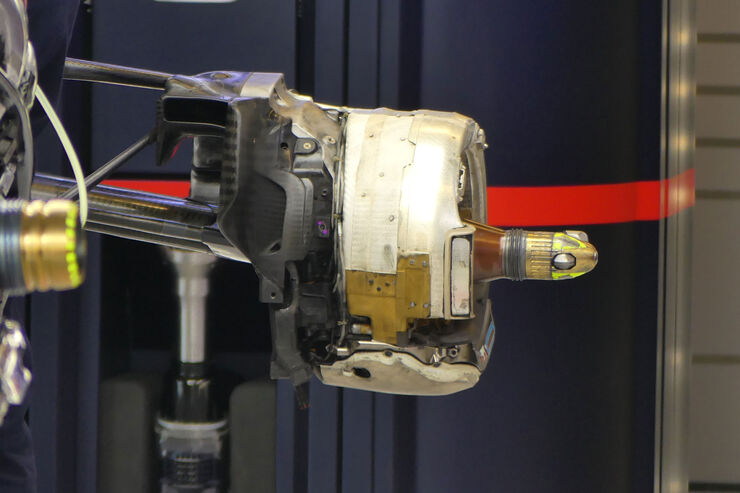 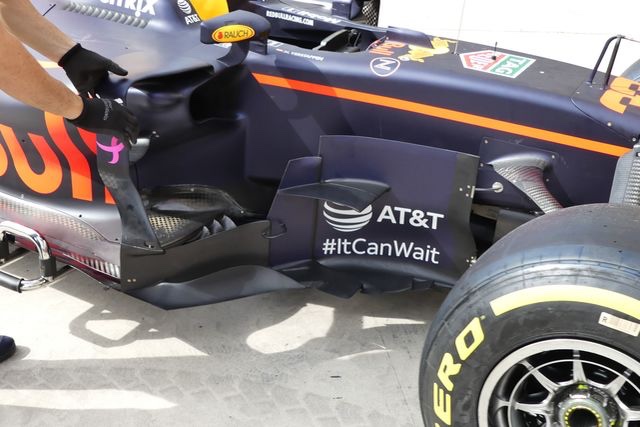 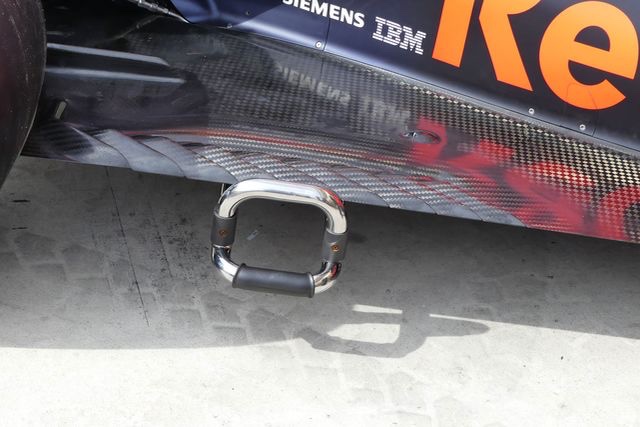 Interesting to see that they did not bring the Ferrari style louvred flow conditioner near the sidepods which they introduced a few races ago.
Top
799 posts