A place to discuss the characteristics of the cars in Formula One, both current as well as historical. Laptimes, driver worshipping and team chatter does not belong here.
68 posts

Yea some of that stuff is misleading ... depending on the position of the car relative to the camera different portions of the car will appear stretched ... like here, a rather extreme example but the projected lines from one car far on the left will never work on the other on the right 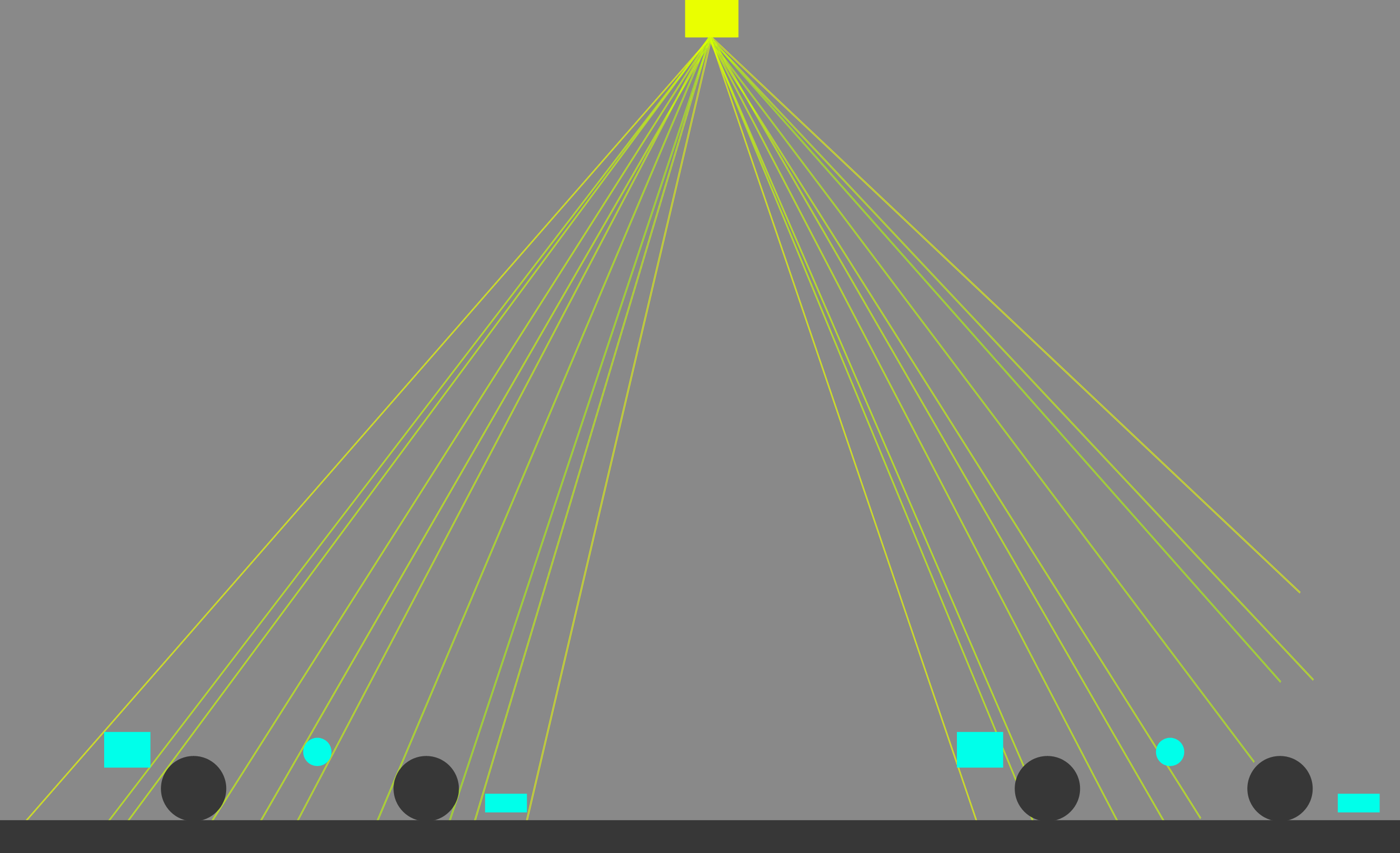 That's why i keep saying ... those pics/comparisons (especially after i try to make up for the distortions) are really just giving a rough idea and maybe some of them are totally pointless (like aligning them on the halo)

If i understand those drawings/descriptions correctly all dimensions between wheels and wings are pretty much fixed so the same wheelbase means the same total length, no?
viewtopic.php?f=6&t=26955
Top

carisi2k wrote: ↑
Sat Mar 17, 2018 11:19 pm
The wheel base can be different even if the car length is the same. The ferrari looks to have pushed it's front suspension forward vs the Red Bull.

It can't. The dimension from the front wheel centre line to the nose is 1200mm as in the regs. The rear wing endplates (and wing) have their own dimension from the rear wheel centre line. This means that the distance from nose to front wheels is the same for all, likewise the rear wing from the rear wheels. If a car is longer then it must have a longer wheel base. There is no other way.
Turbo says "Dumpster sounds so much more classy. It's the diamond of the cesspools." oh, and "The Dutch fans are drunk. Maybe"
Top

carisi2k wrote: ↑
Sat Mar 17, 2018 11:19 pm
The wheel base can be different even if the car length is the same. The ferrari looks to have pushed it's front suspension forward vs the Red Bull.

Those dimensions are the maximum ones, but teams could use shorter noses or rear wing endplates if they want (and they typically don't)
I'm still learning English so please excuse me if my English is not good enough and feel free to correct me via PM if you want.
Top 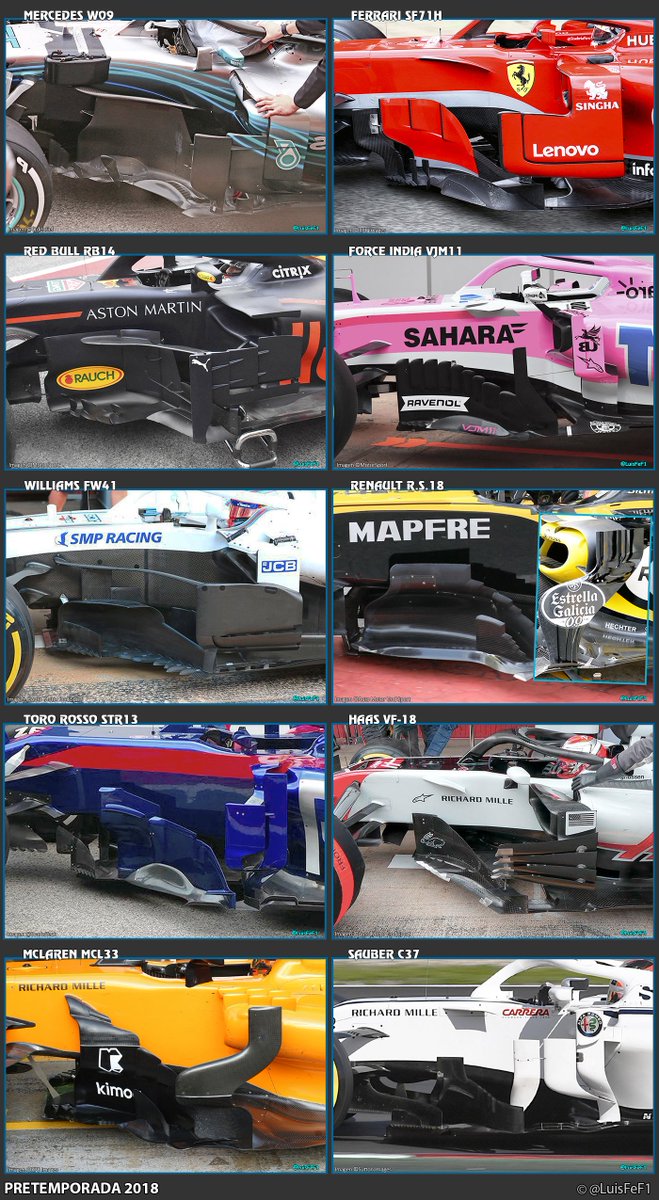 It's amazing that in our second year of these aero rules we still have so many completely different approaches to this area of the car. Ferrari, RedBull and Williams are beginning to converge though.
Top 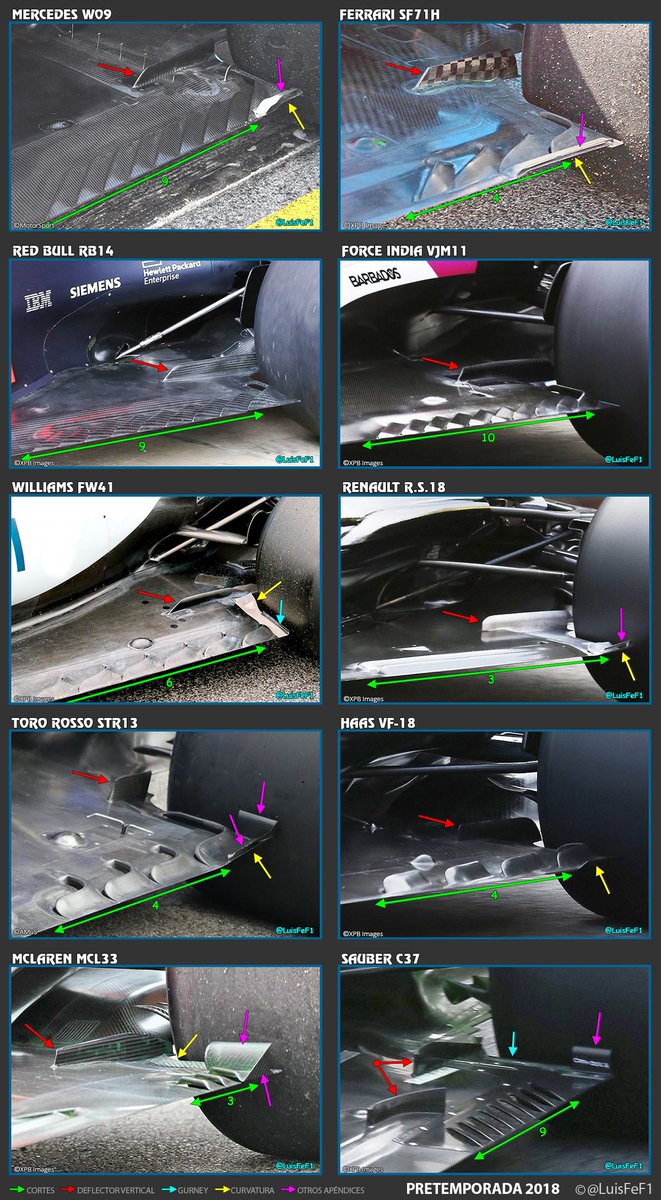 .
Comparison of diffusers after the pre-season test 2018 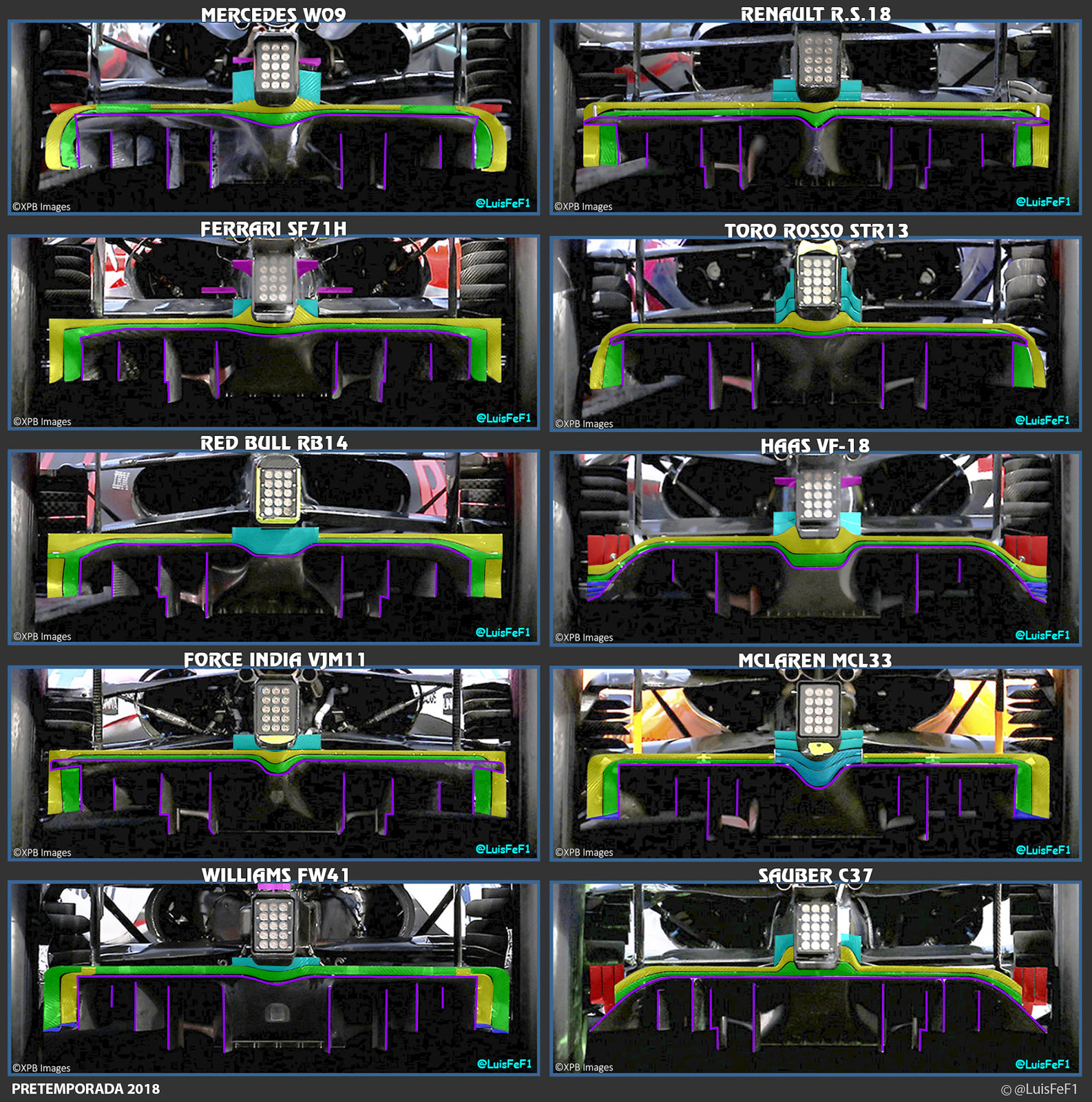 Marked in violet: Structure of the diffuser and vertical strakes

Colored in green, yellow and cyan: Different gurneys flaps located on the trailing edge of the diffuser

In pink: Small wings on the impact structure (Mercedes, Ferrari, Williams and Haas)

Colored in red: Set of small vertical fins on both sides of the diffuser (Mercedes, Haas and Sauber)

The Mercedes rear suspension has a uniquely angled pullrod that connects to the gearbox at a higher location than the others, between the suspension arms. Which is a little higher than where they had it last year. Ferrari, Red Bull, and Renault, continue to locate the bellcrank near to the floor, at the bottom of the gearbox, as seen in previous years.

The location is also further rearward than the others, presumably allowing Merc a shorter pullrod. 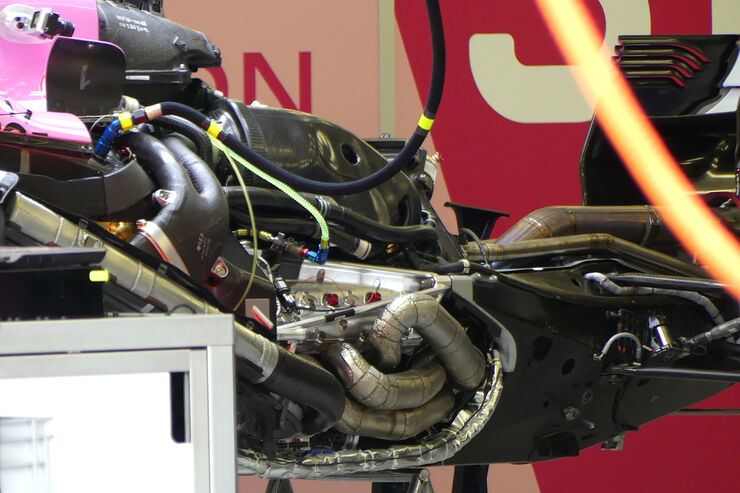 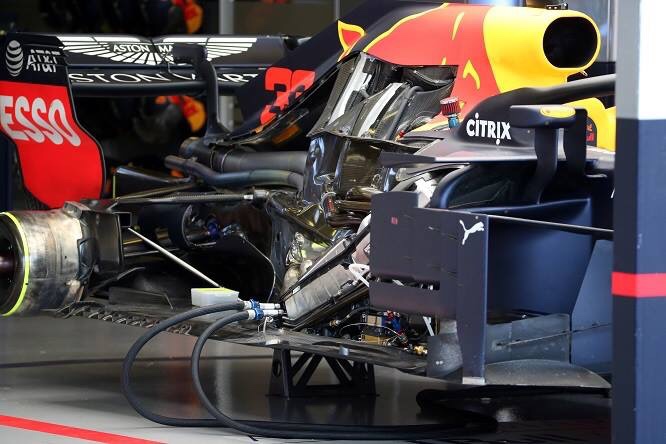 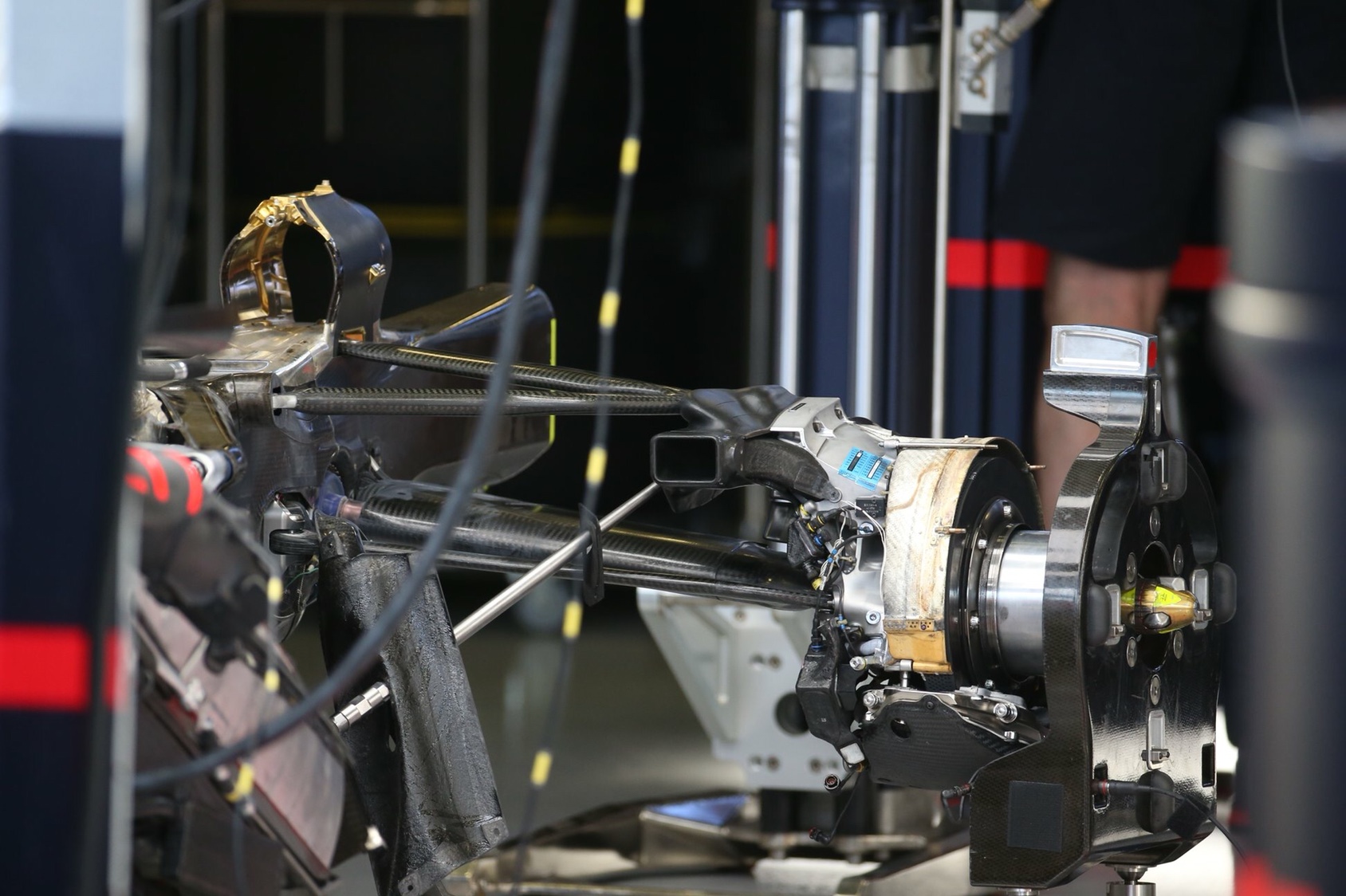 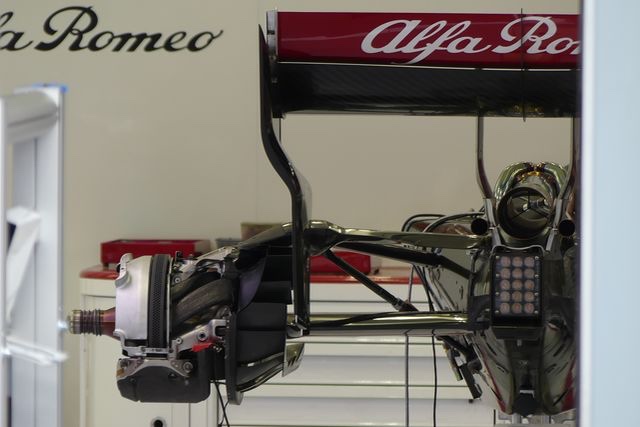 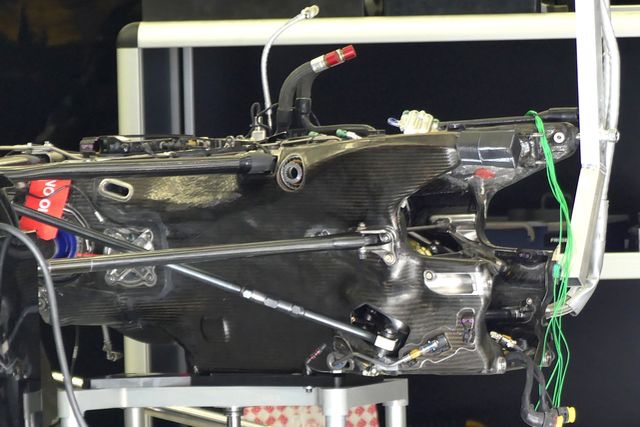 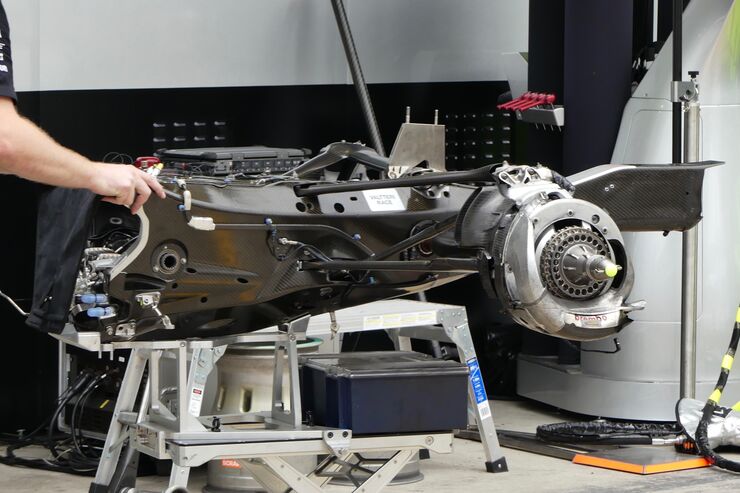 A few nice shots of those cars at roughly the same angle. Roughly. I've ordered these photos in a way that the floor width around driver and where side pods are mostly widest is the same for all cars.

Other than side pod width and (rough) estimation on relative wheelbase differences, we can also note the different approaches for front wing cascade turning vanes and Y250 zone. Ferrari is a bit wider than Red Bull in side pod area, but also has a bit bigger undercut. More importantly, their actual inlet surface is about the same as Red Bull. Merc is wider with wider inlets as well, has about the same undercut width as RB, but also has less tapering in coke-bottle zone. Their 3 front wings are also very different (especially cascades and turning vanes, notably less aggressive on Merc), but have about the same aggressive Y250 curve on flaps. Overall - Ferrari and Red Bull seem to have some positive aspects over Merc. Haas, McLaren and Toro Rosso have about the same side pod width, but Toro Rosso definitely seems sleekest to the rear. Haas has very Ferrari-like front wing (as was noted a few times), McLaren has their own approach with very mild Y250 flap curve. Toro Rosso is somewhere in the middle. Toro Rosso also seems shortest car out of those 3. Massive side pods on Force India, as in previous season. They seem even bigger now, it has to be said. Their front wing seems to be the least aggressive on the grid, but it's still launch spec - so more to come. Renault seems the sleekest, but they have bigger inlet than Williams and smaller undercut.

Let's see how cars with same engines compare (sadly, it's Toro Rosso instead of Sauber). Ferrari definitely sleekest in side pod area, but Toro Rosso is close by and all three cars have nice undercut and coke bottle taper. Seems Honda kept their size-zero philosophy even after McLaren departure. All three Mercedes cars are very wide, but Williams has the biggest undercut on the grid. All three cars also seem to have widest hot air outlets, but it's very close between teams. Only Sauber stands out with biggest outlets of all teams. Interestingly, all three cars have the least aggressive front wing cascade turning vanes on the grid. Renault cars definitely have least cooling requirements (if we can say that based on side pod width). McLaren is widest, but they had some trouble with overheating in pre-season. They have much to learn to be able to achieve Red Bull performance levels. Also, to close this little analysis up - Renault seems to have shortest wheelbase on the grid.

All photos taken from racefans.net, credits to XPB Images.
And they call it a stall. A STALL!

From the preseason to the May tests in Spain we have already seen 29 different engine covers !! 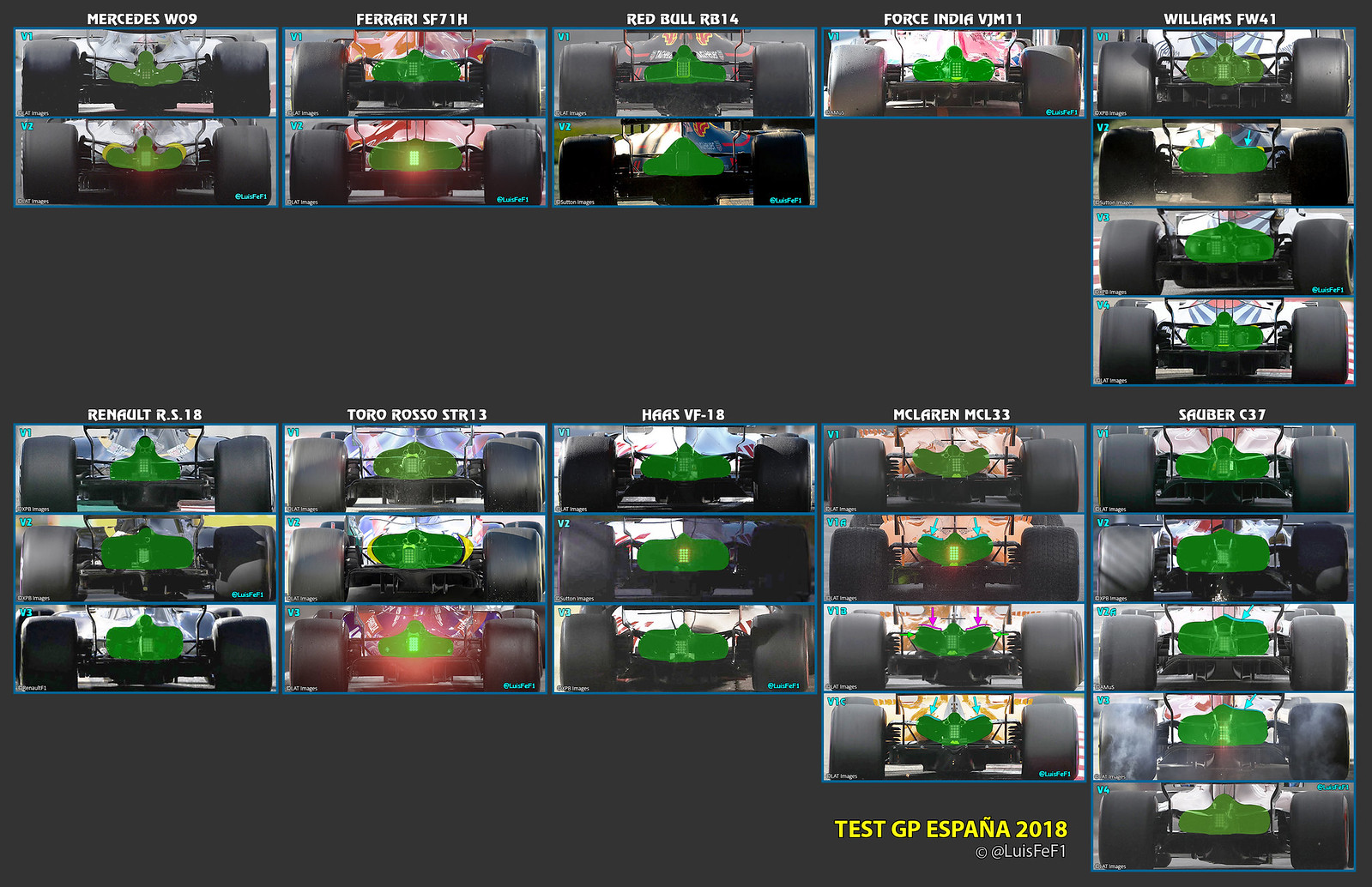 Thank you, awsome comparison! Keep up the good work 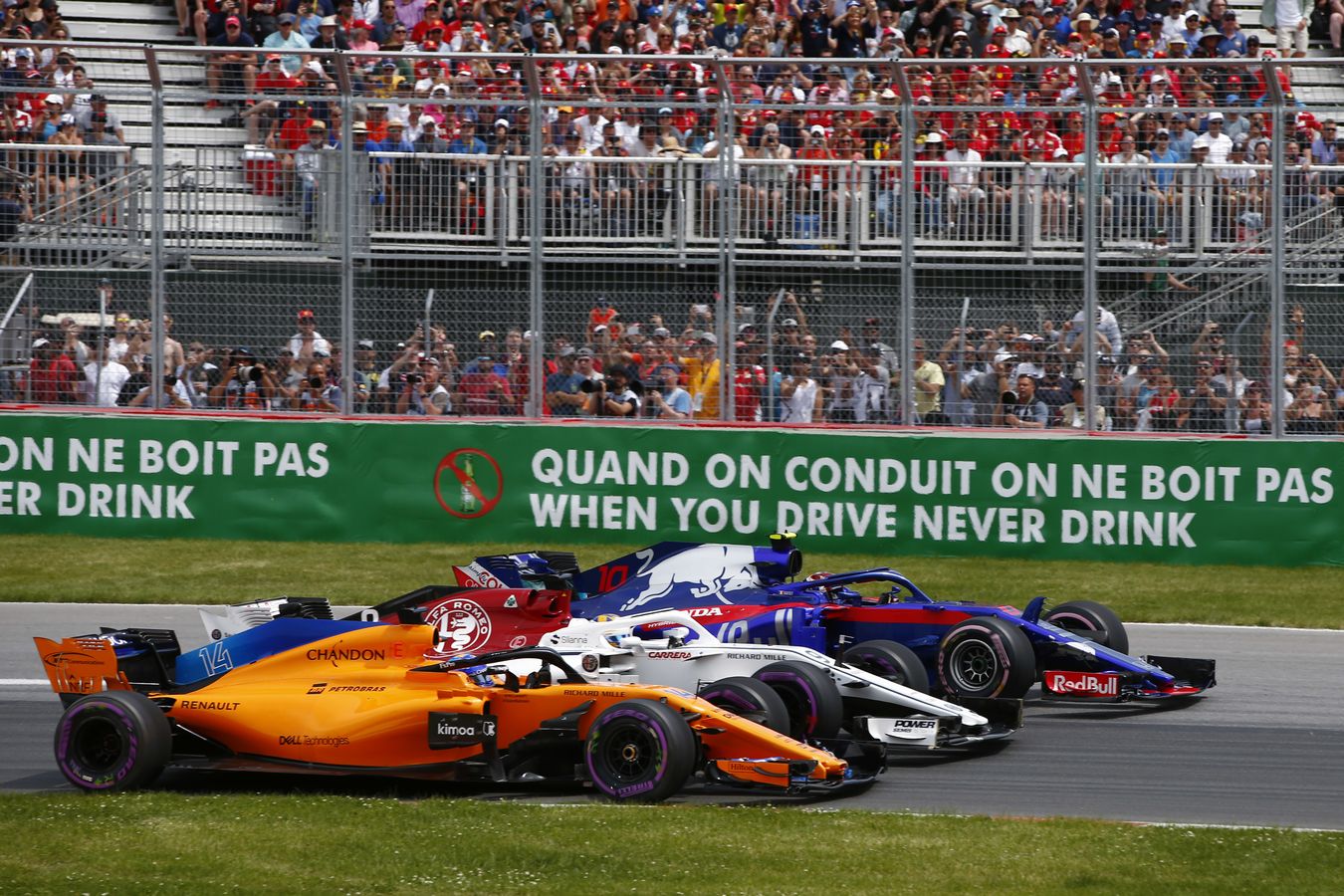 Awsome comparisons by LuisFeF1! Check out his Twitter for more. 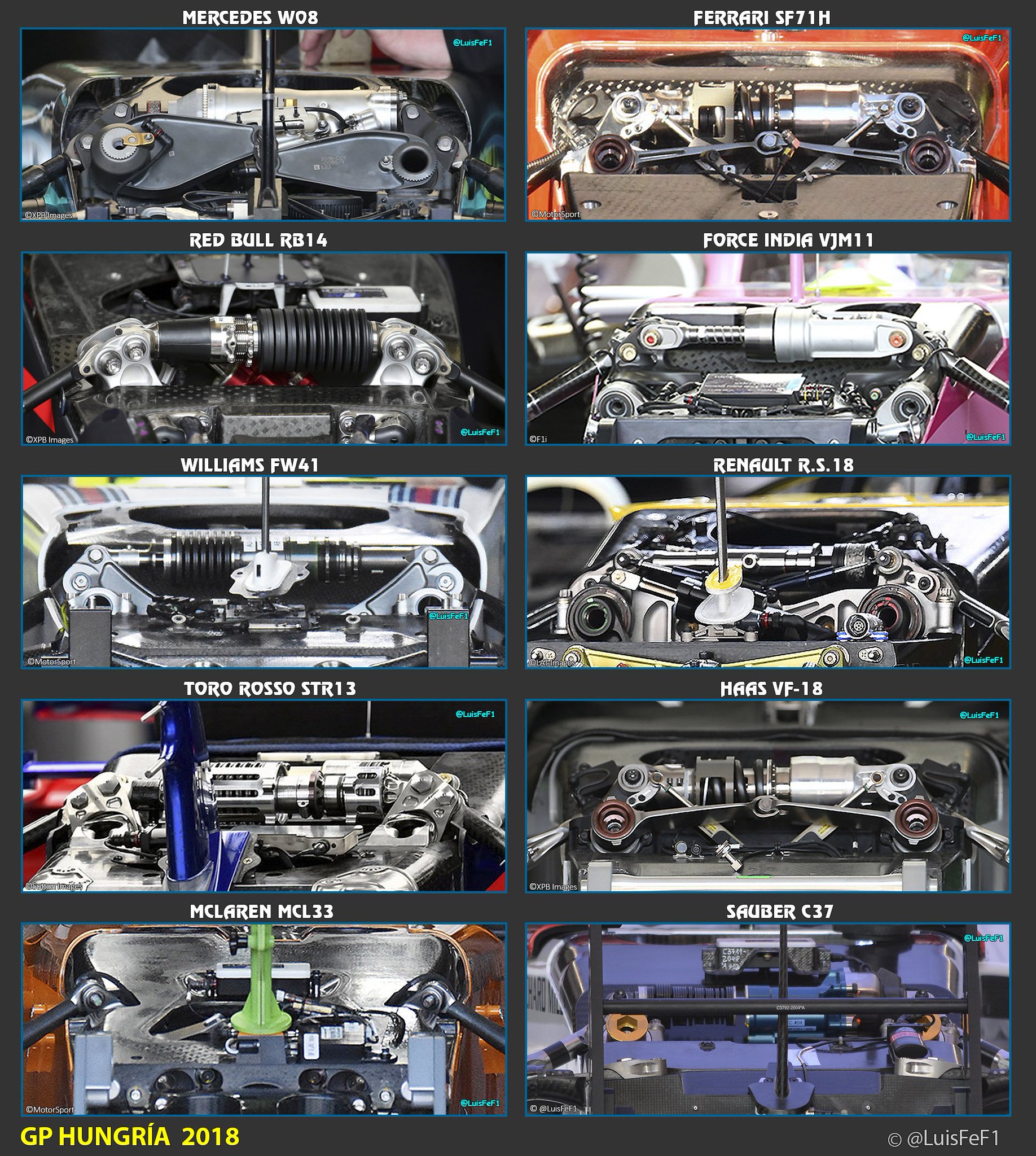 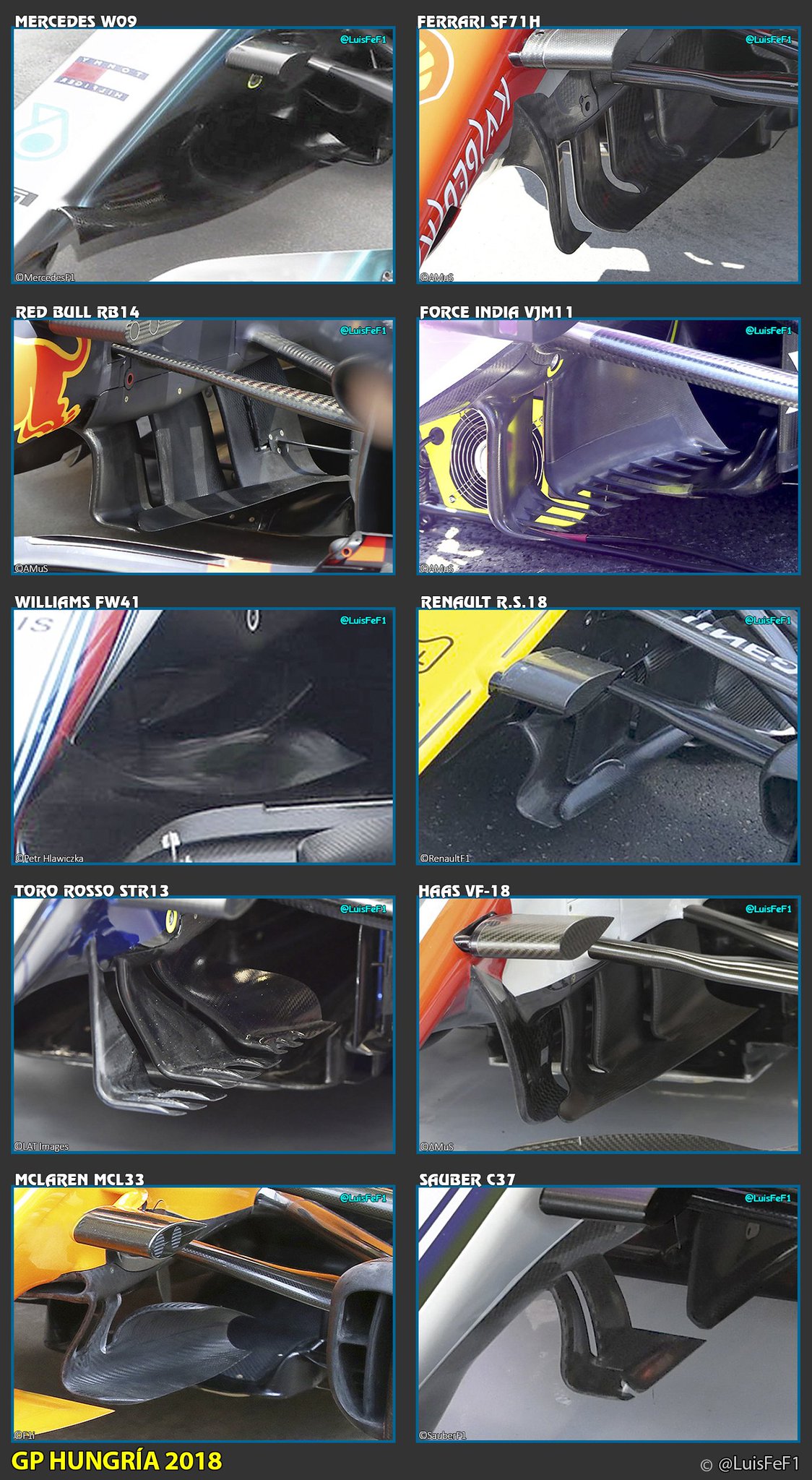 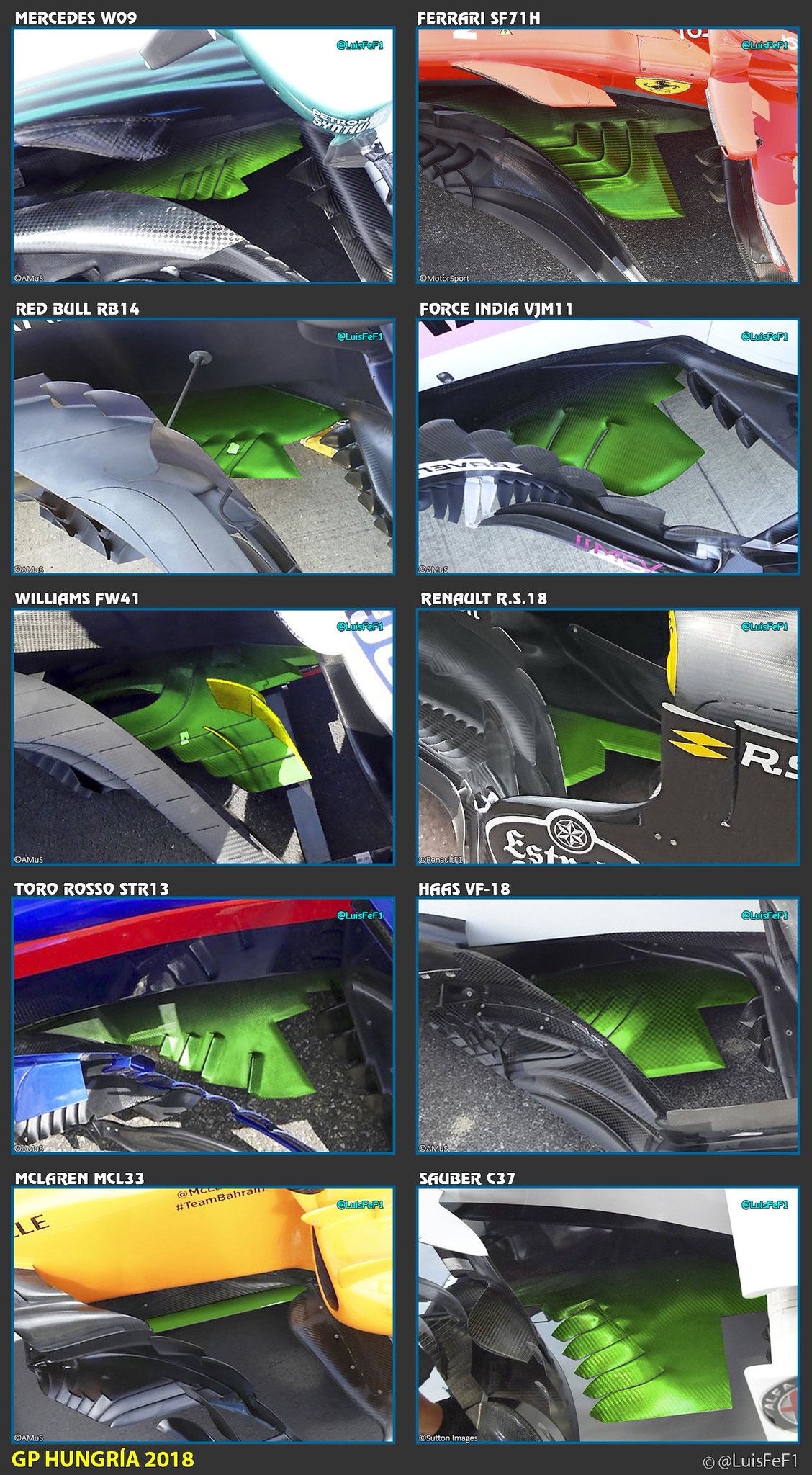 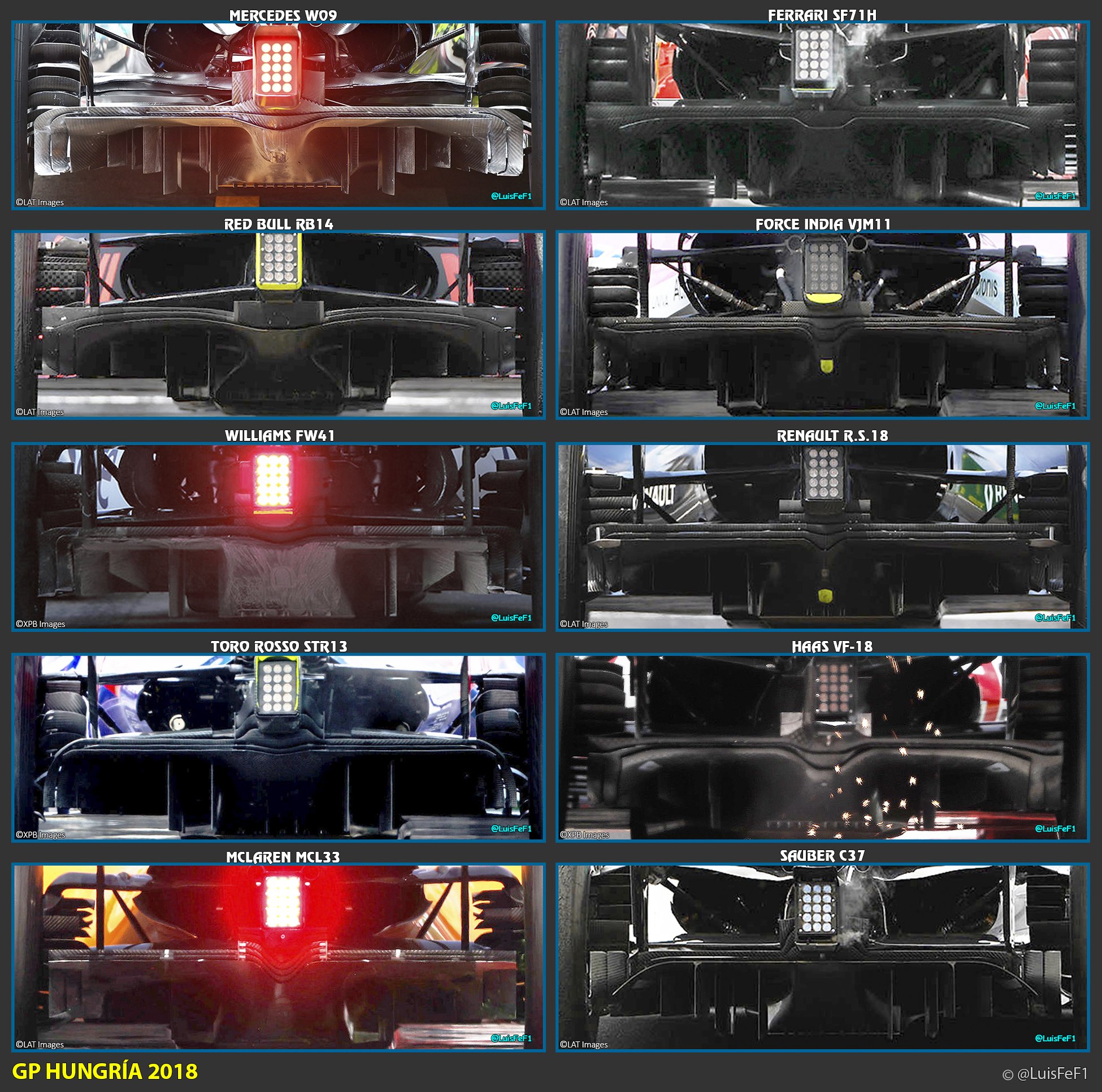 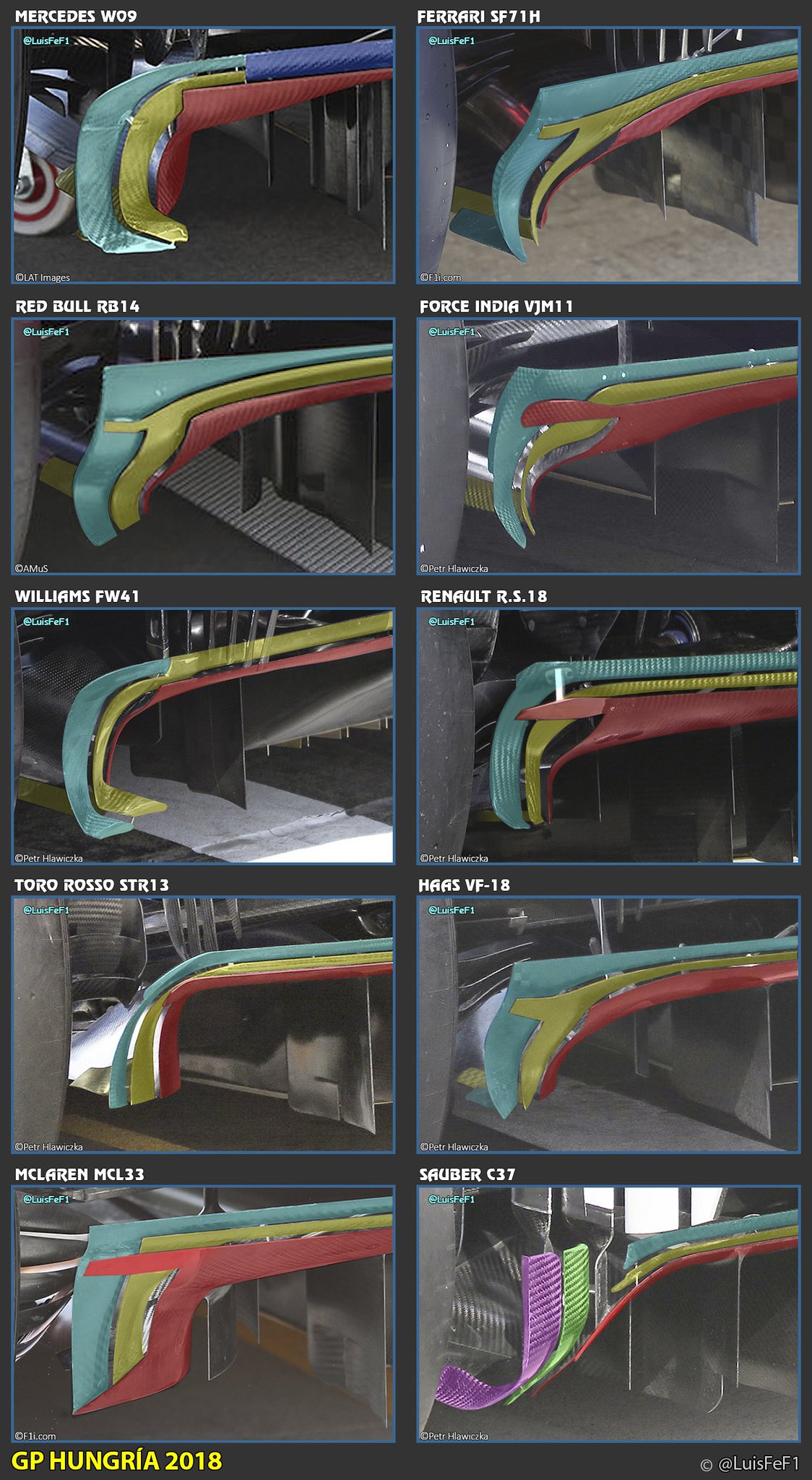