Jenson Button has yet again proved he is simply a master in controlling changeable weather conditions as he drove a great race and profited from other's mistakes. Sebastian Vettel finishes second and still does a great job in the championship while Fernando Alonso is third.

For ease of use, there is one thread per grand prix where you can discuss everything during that specific GP weekend. You can find these threads here.
424 posts

raymondu999 wrote:Yep; and some corners; I believe, using brakes would induce too much load transfer? (I could be talking rubbish)

Yea that could be correct. In either way it´s just in-effective to brake in that complex.
Only time you would brake there is if your off line or something like that.
The truth will come out...
Top

raymondu999 wrote:I think Red Bull have actually undone themselves this year. They have supreme downforce, yes, and that allows them to go super quick in the fast corners especially. But it seems that with these new Pirellis, this is just stretching them under load and chewing them up, overloading the Pirellis. Hence why their race pace in tracks such as Silverstone & Spain, ironically, have been lackluster.

Good point Ray. I think that one factor may be overlooked by some members;
Last season at this time almost nobody thought Fred had enough life in his lumps to make it to the end of the season without having to take at least one grid penalty. Not an issue this season, and the Ferrari boys can ring the neck of the engines all they want down the stretch. I think it is most likely too late to win the WDC, but it is starting to size up as a great fight for 2nd in both championships, with valuable consolation money and pride at stake.
My prediction:
quali,
Vettel
The Boss
Alonso
Webber
Massa


I see Ferrari running the Pirelli’s off the RB's and passing in the pits.
Final outcome:
Alonso
Massa
The Boss
Vettel
Webber
Button
I'm going out on a limb putting "Bulk" in second but I think he has come good and only needs to up his quali form.
All three podiums may end up being due to team orders or else I would give Mark, a little more love.

It may be the case with Felipe Baby as well but only if he ups hiws quali form! =D>
Last edited by Mr Alcatraz on Tue Jul 26, 2011 3:53 pm, edited 1 time in total.
Those who believe in telekinetics raise my hand
Top 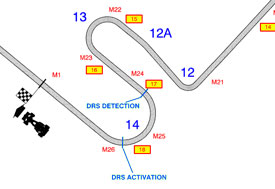 The DRS zone will start 70 metres after the apex of the final corner, with the detection point being just ahead of the entry to the last turn.
Top

The DRS zone will start 70 metres after the apex of the final corner, with the detection point being just ahead of the entry to the last turn.

This should be substantial enough for cars on fresher rubber to pass cars that are starting to get close to the cliff. It will just need to be properly set up in the curves!

Those who believe in telekinetics raise my hand
Top

There was a theory espoused on the BBC during the last race that the Pirellis are being designed to last longer and this favors Webber over Vettel and Ferrari/Macca over RB.

funny Trulli says Hungaroring is a stop and go circuit....when only one really hard braking point is at the end of the start finish line..
or Webber calls it boring but no time to relax...
Top

The weather prediction is fror much milder conditions than this Ferrari homer was hoping for.

I may have to reconsider my predictions

http://weather.yahoo.com/hungary/budape ... st-804365/
Those who believe in telekinetics raise my hand
Top

Here in Croatia current conditions are 17°C (62°F) and heavy rain...it will stay like that for the whole weekend!

Rino wrote:Here in Croatia current conditions are 17°C (62°F) and heavy rain...it will stay like that for the whole weekend!

I am from Hungary and I write from Budapest. It is a bit warmer, than it was in germany. Now 21c•
There is a light rain, but a lot! It is much enough to get on the Pirelli wet weather tires!
Weather specialist says warmer and dryer conditions should be here now, but looks like they are mistake it! It will be funny if it's stays!
Michael Schumacher: When you start out in a team, you have to get the teamwork going and then you get something back.
Top

so luck comes to those who really try as hard as they can..and MCLaren will not be held back by high temps.
this could come in handy for Mercedes as well ..especially if the rain is finally coming which was promised for Nurburgring...
Top

It looks as if it will be grey all weekend, with showers all weekend. Should mix things up enough, the teams at the front will probably run their cars normally, but from Mercedes downward its enough for a gamble to run with a more of a compromise to see if they can get closer to the front.
Twitter: @ESPImperium
BLOG: http://espimperium.wordpress.com
Top

ESPImperium wrote:It looks as if it will be grey all weekend, with showers all weekend. Should mix things up enough, the teams at the front will probably run their cars normally, but from Mercedes downward its enough for a gamble to run with a more of a compromise to see if they can get closer to the front.

Yahoo weather seems to contradict your prediction.
http://weather.yahoo.com/hungary/budape ... st-804365/
Would you please supply a link to the resource that is suggesting rain all weekend?
Thanks
Those who believe in telekinetics raise my hand
Top

Friday should dawn dry, with some sunny periods along with patchy cloud for first practice. Cloud will build up during the break between sessions and it could be overcast in time for the afternoon session. There is an outside chance of afternoon showers, but any rain is more likely after the Formula 1 track activity has been concluded. Temperatures will rise to a much more hospitable 25 degrees during second practice.

The potential for showers will fade on Friday evening to leave a dry night with temperatures no lower than 16 Celsius - higher than it was at the Nurburgring during the daytime.

Saturday will deliver the best of the weekend's weather with strong sunshine for much of the day and just a few light patches of cloud dotted around. Temperatures will climb to 26 or possibly 27 Celsius and track surface temperature should just touch the 40-degree mark during qualifying.

Race day will start out as a carbon copy of Saturday with clear skies and warm early morning sunshine, but cloud is expected to build from the north throughout the support race action and into the early afternoon. It could be rather cloudy with just a few sunny intervals remaining by the time the grand prix gets underway, but it will remain dry with a maximum of 26 degrees Celsius.

Other than Friday, a much better weekend is in prospect. AUTOSPORT Live will continue to monitor the last forecasts and data over the coming days, with a further update on Thursday afternoon.