Sebastian Vettel has won his home Grand Prix at the Nurburgring despite close challenges from both Lotus cars throughout the second half of the race. Kimi Raikkonen finished a close second with Romain Grosjean ending third, just ahead of Alonso.

For ease of use, there is one thread per grand prix where you can discuss everything during that specific GP weekend. You can find these threads here.
367 posts

Get ready for another crappy tyre race...
Top

Too small a timeframe to change the tyres, but Pirelli has been ordered to have a meeting with the teams on wednesday and need to have a concrete proposal. Source: James Allen.
#AeroFrodo
Top

I can't agree with that point. Silverstone is massively different to Nürburgring. The German track is much slower and puts a lot less energy into the tyres.

Sure, my comment was just a question really, this track isn't on the F1 2012 game

It just looks quite sweepy to my untrained eye
Top

I don't know anymore what Lewis has to do to win a race, maybe praying.
The boss follows me on twitter.
Top

I can't agree with that point. Silverstone is massively different to Nürburgring. The German track is much slower and puts a lot less energy into the tyres.

It's true that the majority of the lap is dominated by low speed corners but there are some fast sections. Turn 5 and the Schumacher essess, as well as turn 11 are very quick. To do good in the Nurburgring you need a car with good breaks, and a good balance because the track is neither front or rear limited. Another thing that makes this track very tricky is the fact that the apexes are not obvious.

I don't think we'll see the same problems we saw in Silverstone, tire wise, this track punishes you for using the kerbs in all but three places.

I think Lotus can do well here, however if Mercedes has gotten on top of their race pace they will be hard to beat.

Yes agree or Another one for Ros and perhaps Mercedez closing in on RedBull. It's possible. If they keep getting their car to every GP in the form it has been. Mercedez did well bringing in all the Changes they did. Ros and Ham wow what a team.
RedBull Racing Checo//PEREZ
Top

Hope Pirelli sorts things out or we'll end up seeing this 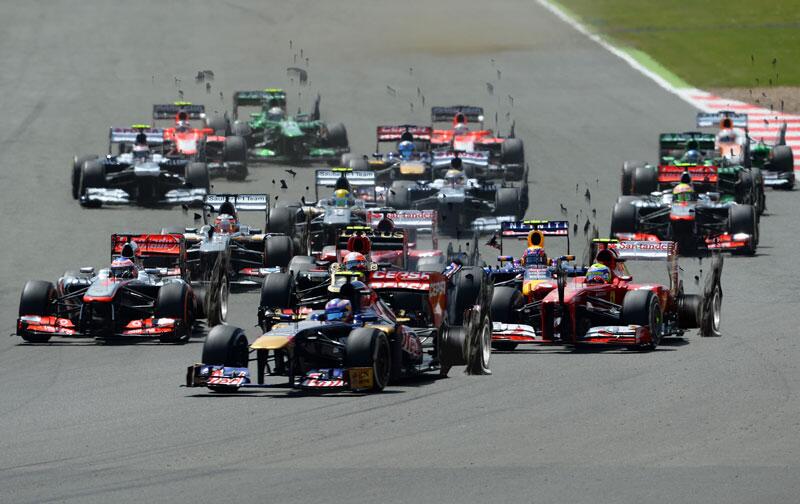 Teams are not going to block a change in the tires do you think that the tires can be changed in time for Germany? With teams threatening to boycott they may need to get a move on.
"Leave it to Lewis Hamilton to ruin Redbull's day" - Martin Brundle

"Fresh tires, 15 laps. What do you think Lewis Hamilton is going to do?" - Martin Brundle
Top

Looking at Alonso's race performance pattern (he performs well on every alternate race) for this season, I am predicting:

Unless Pirelli change the tyres so much that all the teams have no idea how they react and we end up having a Caterham win. Stranger things have happened!
Felipe Baby!
Top
367 posts