For ease of use, there is one thread per grand prix where you can discuss everything during that specific GP weekend. You can find these threads here.
524 posts

You really mean that !?
In my opinion drs is boring as f ...
It is easily the main divider between top 3 and midfield. For instance, it took Bottas a good couple of laps to pass the Renault simply because he had to execute all preparation perfect to being able to pass the renault. Passed made were so much more driver skill, and a whole lot better than just pushing a button against a sitting duck.
If you look at Lec's attempt to re-pass Max at the backstraight; he was about 5/6 carlengths behind after the left/right corners, but with just a push of a button he was next to Max by the end of that straight ...
DRS, please leave ...

Perez's move on Norris and Sainz's move on Hulkenberg on the last lap both needed a lot more precision and skill even with DRS, than Bottas's move! Leclerc's move you refer to was one of the best i've seen the whole season...he had to work that outside line which is not easy and he at least had a chance to fight back after being overtaken!

Without DRS nothing of that would have happened!

The work of DRS is to bring a driver to within striking distance at the end of the straight...without DRS drivers just weren't close enough to make a move even on much slower cars and that is not about driver skill...it's about who's got more power and/or less drag...remember Alonso vs Petrov!

I don't think Alonso or his Ferrari weren't good enough to pass Petrov in a Renault! Renault just had too much top speed that year for anyone to pass them down a straight...just like Ferrari this year! This is where DRS comes in...it would have given Alonso a chance at least!

And to be clear i am not in favor of a too powerful DRS...i said above what is the logic behind DRS for me and F1 has shown us that they can get it right in many tracks just by playing with the DRS zone distance!

Remember though that the cars strategy and tyres was called before the lack of DRS was known.
If it had been planned, and the cars allowed adjustments in aero I think it may have been a better effort.

I have to put my cards on the table though and admit to being anti DRS as the car design favours it over close racing.
We are standing on the shoulders of Giants. So don't kick.
Top

Haha, they stalled - rookie error!! They’ll both get better at it as they mature no doubt.

The control unit's champion detector alarmed and shut the car off. No donuts if you are not a WDC!

If it was a clerical error then ferrari claimed this:
Ferrari are apparently arguing that a technical directive is a guideline and not a sporting rule and therefore not subject to sanction.
This means that they knew about the discrepancy and were defending it

So I googled 'directive' and it means 'an official or authoritative instruction'. That definitely isn't, nor implies a 'guideline'.
"Bite my shiny metal ass" - Bender
Top

Or just didnt care about where exactly their car was as the were focused on the crowd, not some marker

Yes. Real shame, Vettel has been practicing all season...
Top

horror. how dare people write their opinions about the whole year in the *final* race of the year topic. Horror.. so bad.

Sierra117 wrote: ↑
Mon Dec 02, 2019 1:49 am
Ah, the final stage in the life of every ThreadStar. As the mass of regret over one's driver exceeds beyond an unbearable level, it collapses in on itself and results in an invisible but certainly super massive ThreadHole, where nothing, not even light, can escape. All logic and reasoning is bent out of shape as it travels past the accretion disk, which is full of infinite loops of fanboi-ism, and causes said logic and reasoning to fall into the event horizon, whereby it gets torn apart leading to what we call, "BANNED SPACE".

Well done, Sierra! (from someone who actually lives in the Sierra mountains in the US).
Top 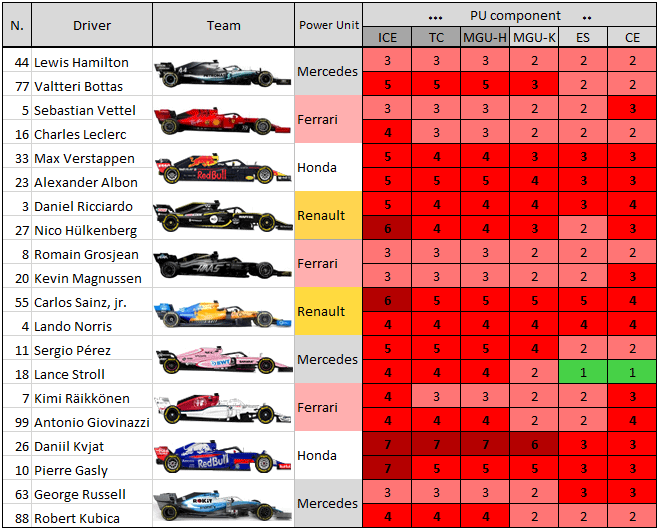 Only two drivers did the entire season with the stipulated number of PU items? Didn't realise that. That's quite surprising.
Turbo says "Dumpster sounds so much more classy. It's the diamond of the cesspools." oh, and "The Dutch fans are drunk. Maybe"
Top

Is there perhaps a site somewhere where you can follow the transactions, or read a report during the day? They have been testing for three hours now.
Top

Well actually, there's still questions to be answered. If they were running less fuel than the FIA believe, does that mean they are running well below the fuel flow limit? OR, do the FIA calibrate the fuel flow sensors based on the usage they calculate from race to race, and by using less fuel in some races, they are able to trick the FIA?

Race 1 - They declare more fuel than what's in the car. At the end of the race, the FIA compare the delcared amount against what was used and use this as the basis of their fuel flow calculation for the next race and calibrate the sensor as such.

Race 2 - They delcare the same amount of fuel as before, but this time they put it in the car. During the race they burn through more fuel, potentially exceeding the fuel flow limit, but the FIA just see they used the same amount of fuel as before, and possibly ignore the fuel flow sensor reading as an anomaly?
"Unbelievable how silly this Formula 1 is these days, with this stupid overtakes."
—Sebastian Vettel, 2012 US GP
Top

If you're interested ?? what sort of question is that!!!

Thanks for reminding me.