Post here information about your own engineering projects, including but not limited to building your own car or designing a virtual car through CAD.
91 posts

Here's the relevant regulations for 2016 relating to aerodynamics:

J.5.2.7. Aerodynamic devices may only be fitted to
Racing and Sports Racing Cars (unless prohibited by
an Approved Formula), or where specifically permitted,
where FIA homologated, or where complying with
National type approval. Such devices must not extend
beyond the maximum width of the vehicle, above the
maximum height of any roof, or for an open car the
maximum height of the ROPS. Racing Cars
must comply with Drawing Q19.17.

J.5.20.10. Not have skirts, bridging devices or any form
of aerodynamic device between the chassis and the
ground/track. Any specific part of the car influencing
its aerodynamic performance must:
a) comply with rules relating to coachwork.
b) be rigidly secured to the entirely sprung part of
the vehicle.
c) remain immobile in relation to the vehicle.

Basically, there's not much at all!
Sprinting a Formula Ford Ecoboost
Buy The Racing Driver's Little Book of Excuses
The Marussia Collection: All the wind tunnel models prior to 2015.
Top

Why not host it on GitHub? If you store the parts as ASCII STL then you can easily make changes, branches, etc.
Top

That's a really good idea. However, STL isn't the best format for updating with new parts. A suitable parametric format would be better.
Sprinting a Formula Ford Ecoboost
Buy The Racing Driver's Little Book of Excuses
The Marussia Collection: All the wind tunnel models prior to 2015.
Top

After the first few events last year, it was time for a proper going over this winter. The bulk of the work was carried out by Bill at Empire Racing because he knows what he's doing better than most people and he's conveniently close. First of all, he stripped the chassis and took a good look through everything. 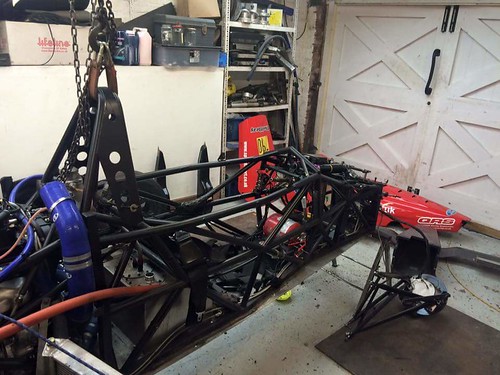 The secondary fuel tank came out at the same time as we have no need to carry so much fuel and it gave more space to relocate the fuel filler somewhere more accessible. On the plus side, we saved a little weight too. Whilst stripping the car down, the side penetration protection panels came off. As we don't compete with other cars on track, we don't have the risk of cars t-boning us and as they weigh 15kg, they were not refitted! 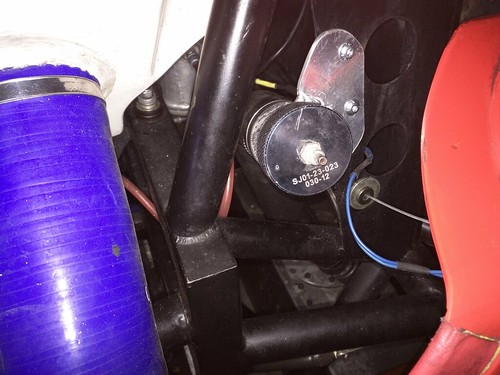 The front wing was also lowered to better utilise ground effect. Bill carried out a full alignment, making new shims to set the camber correctly for the Avon tyres and corner weighted the car. This was to be the biggest shock. We had been told the car weighed 455kg. Despite losing nearly 20kg since then, the car weighed in at a portly 473kg. That puts power/weight at just 360bhp/ton with driver onboard. 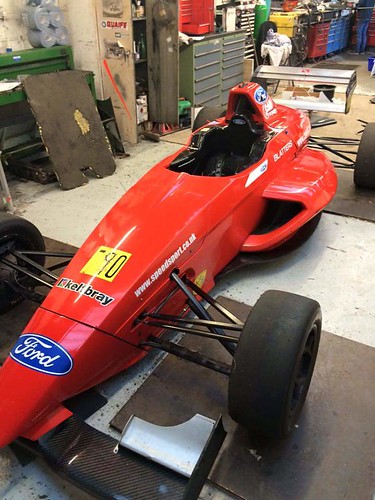 This made weight loss quite a critical component of the winter makeover. First off the car was the airbox that must have been made of lead it was that heavy. to be replaced with the standard Mygale part that weighed just a few grams. 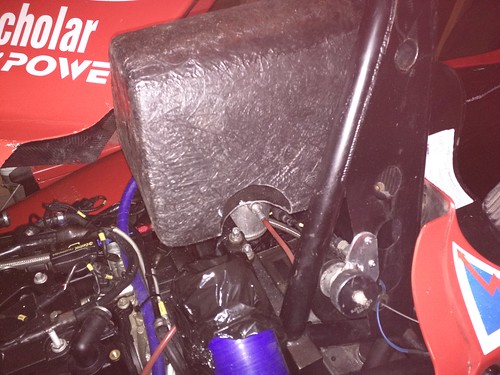 Next up was the front wing end plates. At a chunky 888 grammes each, they were replaced with some gucci carbon ones at 195 grammes. Clearly, these end plates are in need of a footplate vortex channel and that's on the list of things to complete in the ever-diminishing time before the season starts. There's probably half a kilo of mud to come off the front wing after towing through the partially-flooded lanes back from Empire Racing. 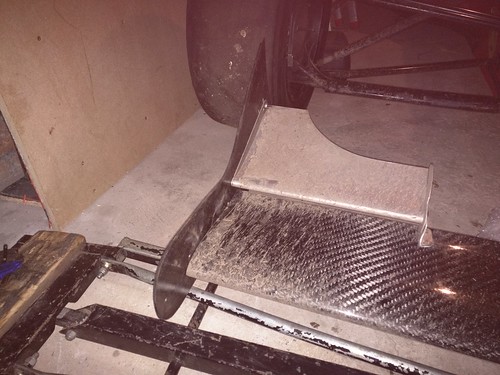 Also on the list of things to do before the season starts is a rudimentary diffuser whilst the CAD modelling is completed for the CFD analysis of a new floor. Even a small diffuser on the trailing edge of the existing floor will make a big difference as the car does not currently have a lot of downforce. So far, we've got entries accepted for Castle Combe, Rockingham, Llandow and Crystal Palace. It's just 3.5 weeks to the first event of the season...
Sprinting a Formula Ford Ecoboost
Buy The Racing Driver's Little Book of Excuses
The Marussia Collection: All the wind tunnel models prior to 2015.
Top

Presumably you have a nice heater in your garage?! At least it appears you have a lot of room!
COMPETITION CAR ENGINEERING -Home of VIRTUAL STOPWATCH
Top

No, my garage is unheated and tiny. There's no way I could fit the EgoBoost in there and all the stuff that goes with it! The photos are from Empire Racing's workshop, which is compact but big enough and I guess they have heating of some description.
Sprinting a Formula Ford Ecoboost
Buy The Racing Driver's Little Book of Excuses
The Marussia Collection: All the wind tunnel models prior to 2015.
Top

It's been a long winter and things have not quite gone to plan, so it was great to finally start the season at BARC's Rockingham Sprint. We arrived bright and early in the morning to discover that we were a race suit, helmet and Hans device short of what we needed. After scrabbling around the paddock, we managed to locate loan items from fellow competitors, because club motorsport's like that. Thanks to you - you know who you are and I'm very grateful. 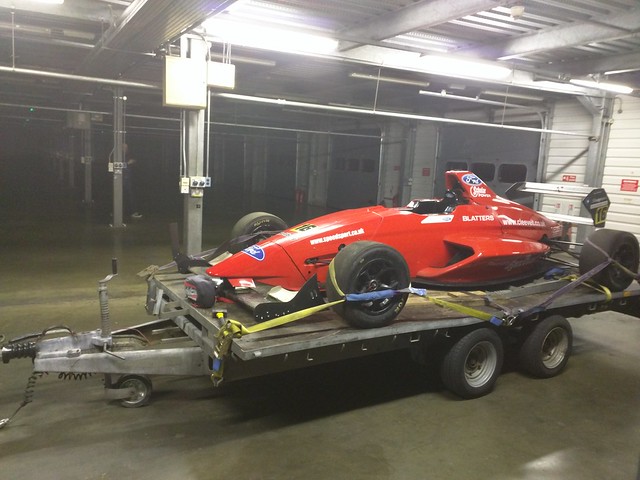 So onto the event. Borrowing a helmet meant that I couldn't do the convoy run as its owner was using the helmet. I took the tow car out instead to check the lines. This meant I didn't get to check the car was running OK, which was to prove problematic. Heading to first practice, the car cut out at the noise test. It was an electrical problem - the battery was dead. I got a push to the start line but the ECU went into limp home mode off the line and I cruised around at 62mph. Not ideal. 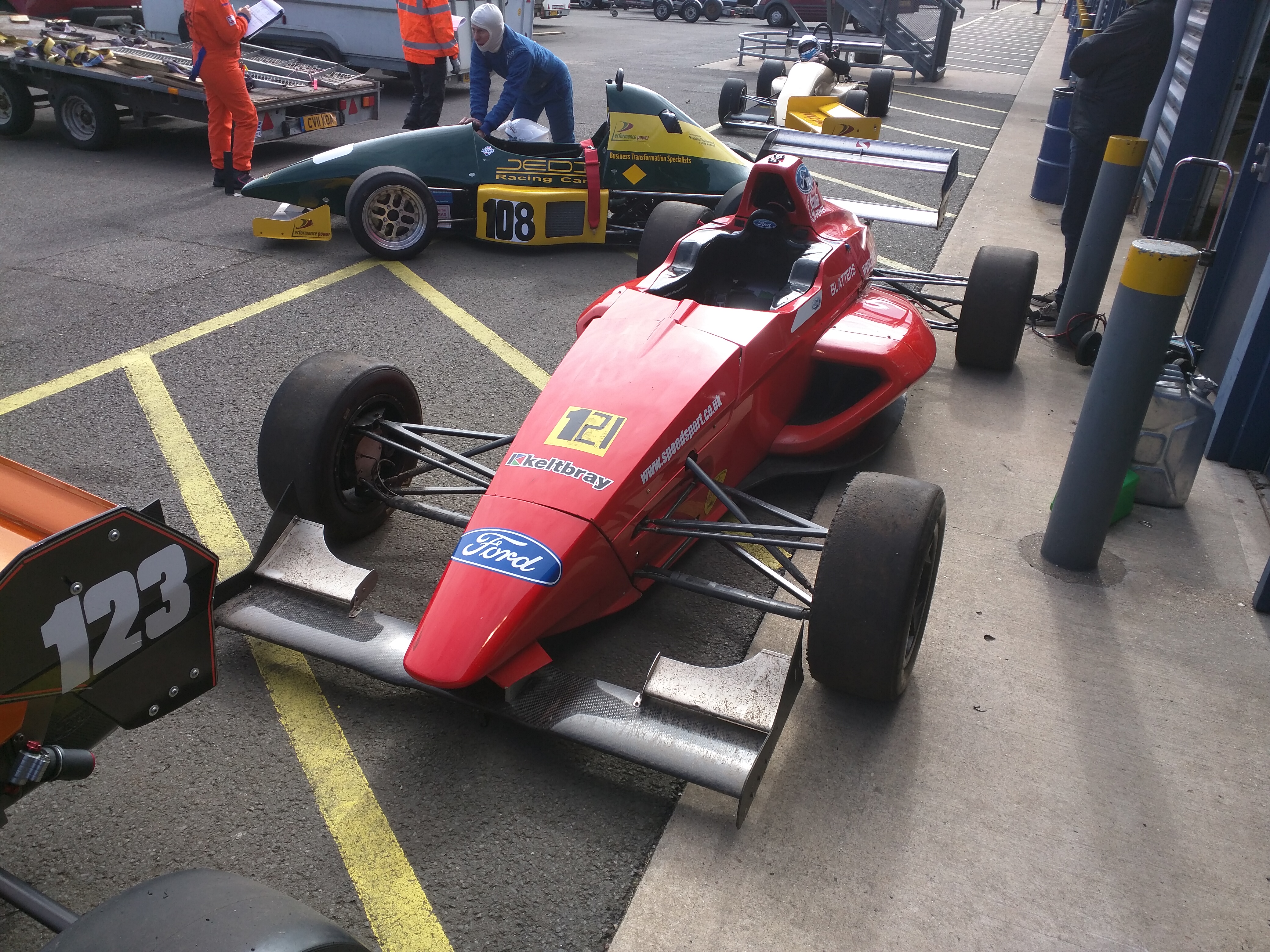 I borrowed a charger and used Rockingham's handy power points to charge until second practice. When unclipping, I noticed the charger was rated at 0.6A, which didn't inspire confidence. My lack of confidence was well founded and I limped round at 70mph this time thanks to making use of the overboost on shifting to get a bit more speed. Luckily, I was able to borrow a fast charger over lunch and get some useful juice in the battery. 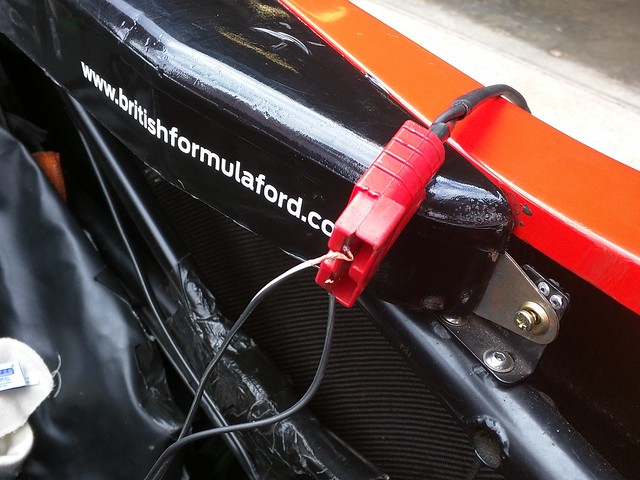 After lunch, it was straight into the timed runs and I headed off the line in very much a learning phase but having to set a good time as the others were 20-30 seconds ahead of my best in practice. The banked corner was daunting and remembering that we'd done some aero work over the winter, I turned in at a tentative 105mph, so I was surprised to be backing it in sideways! The rest of the lap was considerably sideways, suggesting the car needs a little oversteer dialling out. I was somehow leading the class though as Pete had slowed since practice.

Before the next run, we backed off the front flaps and lowered rear tyre pressures as the car was oversteering at both the hairpin and on the banking. On the next run, I made a great start and pushed hard through the banking, the car still snaking a little to the apex. On the infield section, I caught sight of a FF1600 ahead. At the finish, I was too close for the timing system to work and my time was disallowed. I was granted a re-run and had to refuel the car and re-seat myself in just 5 minutes to get back out. I was the final car to run and whilst the run didn't feel as good as the previous run, it was good enough to improve over my first run and keep my class win. A shaky start to the season, but at least the result was good! 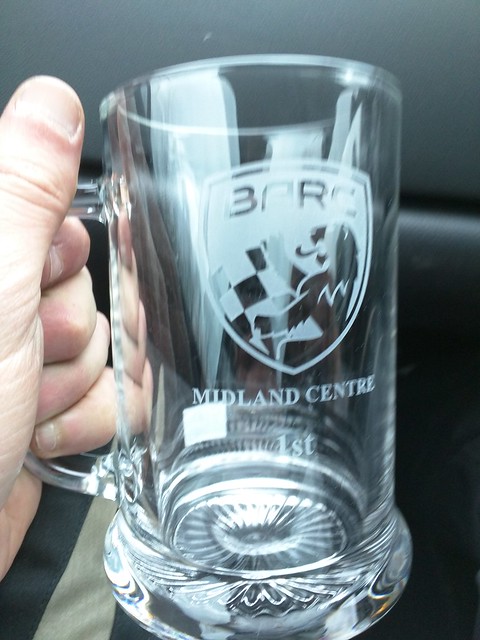 Sprinting a Formula Ford Ecoboost
Buy The Racing Driver's Little Book of Excuses
The Marussia Collection: All the wind tunnel models prior to 2015.
Top

I was lucky enough to receive data from Graham and Pete who also run Mygale Ecoboosts and were at Rockingham with me. Here follows a short review comparing our runs. I'm green, Pete is blue and Graham is yellow. 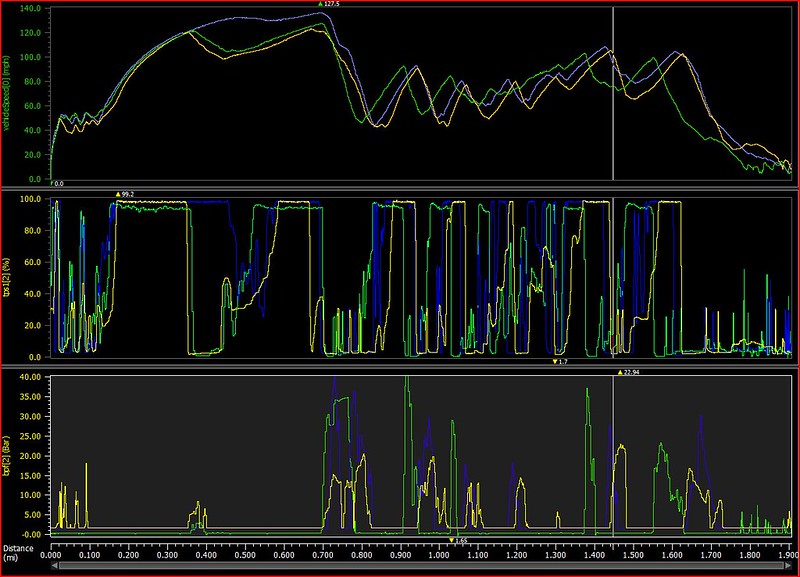 My minimum corner speeds are the fastest from the hairpin to the final corner. Significant gains to be made in the banked corner. Graham needs to carry more speed in most of the corners.

Brake Pressure
Graham’s brake pressure is lower, which correlates with the rear pressure also being lower, ruling out bad brake bias. More confidence needed on brakes and no braking needed at the chicane. Pete took two stabs at the pedal into the hairpin, so possibility of braking later there. Pete was the only one not to brake into the banked corner. It’s probable that this contributed to the oversteer I complained of and I needed a bigger set of bollocks. I'm braking the hardest, so it’s likely Pete and Graham can brake later.

Throttle Position
Graham’s throttle usage is notably smoother than the other two, but he often takes two bites of the throttle exiting each corner; more patience required. Pete is stabbing the throttle mid-corner, which suggests he’s unsettling the car, given the corresponding steering corrections. I am also stabbing the throttle to a lesser extent and less consistently.

Fuel Pressure (low pressure pump)
Pete and Graham are both running about 4.5-4.7 bar, whilst I am running about 5.7 bar. Pete presumably suffered fuel surge at the exit of the hairpin.

Oil Pressure
My pressure is high, presumably because the engine wasn’t up to temperature. Graham’s pressure varies much more than the other two, presumably because there’s no cooler in there, which might be stabilising the oil supply.
Sprinting a Formula Ford Ecoboost
Buy The Racing Driver's Little Book of Excuses
The Marussia Collection: All the wind tunnel models prior to 2015.
Top

I'm one of probably many who've been following this thread. Congrats! Overcame the obstacles and came away with the class win! Even with the setbacks I'm sure you had fun.
John Paige
https://www.lab-14.com/
http://transamcountry.com/community/ind ... ic=47001.0
Top

Absolutely. If it wasn't fun despite this, I'd give up. My new trailer arrived yesterday and the first 3D printed parts have started to go on the car.
Sprinting a Formula Ford Ecoboost
Buy The Racing Driver's Little Book of Excuses
The Marussia Collection: All the wind tunnel models prior to 2015.
Top

What's your idea for the floor and diffuser?
Top

I can run a full floor as there are no regulations so the only decision is whether to poke the wishbones through the diffuser or start it aft of the wishbones.
Sprinting a Formula Ford Ecoboost
Buy The Racing Driver's Little Book of Excuses
The Marussia Collection: All the wind tunnel models prior to 2015.
Top

Well, I think the further back you start the diffuser, the better, since in simple terms a larger floor area equals more downforce.
But of course there may be reasons to make you go another way.
Top

But the floor plan area is the same no matter where the diffuser starts. There doesn't need to be any flat section at all. It could be entirely curved as per cars in the "ground effects" era of F1.
Sprinting a Formula Ford Ecoboost
Buy The Racing Driver's Little Book of Excuses
The Marussia Collection: All the wind tunnel models prior to 2015.
Top
91 posts