Post here information about your own engineering projects, including but not limited to building your own car or designing a virtual car through CAD.
32 posts

A quick report on this one, as there isn't much to talk about

Starting it was probably the most challenging bit, as the size was more or less a mistery and kind of difficult to measure off photos. Once figured, I built the basic shape. The structure is, as usual, composed of layers:

Then, I coated it with thin black paper. I used a layup which aimed at getting the surface as smooth as possible, which didn't succeed completely. Then, I added the details. Not entirely satisfied, partly due to the lack of photos, but still, I'll live with it. The vertical elements on the side had to be attached too, they will be a stir later, but can't be glued to the engine cover as I've done previously. Finally, some pressure sensors

Varnished (appart from the area where the cockpit and engine will be glued on):

Underside with the wooden plank

88 pieces in total, powertrain next.
More on my website
Stay tuned,
cheers

After a long pause due to travelling, summer holidays and some other factors, the MP4-30 is back!

Starting off my experience from last time, I had high expectations. The build wasn't easy by any means though, as information/photos weren't exactly abundant. However, some nice drawings by Scarbs and a couple of articles helped me a lot. Logically, I started with the engine. more than doubling the parts compared to last time. It has the cylinder curvatures and structures which hold it to the chassis and gearbox plus the oil pressure and scavanger pumps, as well as the water pump, even though they are only rough estimates, as no info was available. The clutch section is at the back.

The rest of the components took me roughly 10 days to manufacture. Most of the time I spent looking at photos, as figuring out what goes where was key. For example, the cooling layout: the left side houses the engine water radiator, the right one the battery water and intercooler. The oil radiator is separate, under the airbox. I used a new piping technology too - tin wire, wrapped accordingly to achieve the desired thickness. Also, the monocoque had to be reworked - there wasn't enough space for the battery and the air inlet. Moral: ALWAYS plan properly!

Here's an overview of all components: 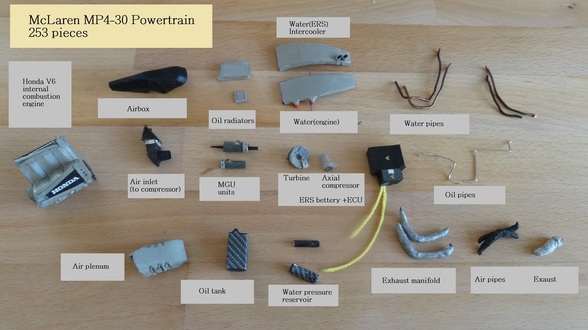 Please visit my website for detailed photos of each component.

Here's a preview of the engine with its air plenum, oil tank, exhaust manifold and turbine:

The slightly too bulky airbox, built with a framework technology:

Thanks for watching! Stay tuned, and in the meantime check out F1FP .
Cheers

Great work! i've been following you're work for quite some time and i must say you've improved alot! BTW nice song really like dnb

Thanks, that's exactly my goal. Some on that topic - I'm planning a 1:10 scale car next

kosioBG wrote:Thanks, that's exactly my goal. Some on that topic - I'm planning a 1:10 scale car next

Would love to see it! I guess it might be 'easier' because parts are larger but can also be more difficult because you can add alot more detail in them
Top

Daliracing wrote: I guess it might be 'easier' because parts are larger but can also be more difficult because you can add alot more detail in them

I started with 3 drawings - a top, side and front view. I had to take the suspension pickup points, the rear wing beam, and engine flitting into account. Also, I wasn't sure wether the crash structure was structurally part of the GB housing. These issues were only solvable because of the help I got in the McLaren thread, for which I'm extremely grateful. With the drawing done, I started with the main shape. For the first time, I replicated the triangluar slope towards the front, the screws which attach to the engine and the driveshaft bearings.

Unfortunately, it was a bit too long, so I had to cut it in half and reglue it, shortened.

If you're wondering why it isn't exactly simmertical - the engine was fitted at an angle, so the GB had to compensate. That's the reason why one screw is longer that the other one.
Next, the CF texturing followed. I had loads of fun aligning the sheets of CF texture. Then, details - some screws, sensors

, the bearing housing, a slot for the bodywork (under the driveshaft) and an aero detail which works together with the floor to block the air over the rear floor end and extract air from the diffuser (I believe). The rear crash structure got bulges on both the top and bottom sides which aren't visible on the previous pics.

On the top side, the turbine and exhaust openings, the exhaust rails and the RW pylon mount (see below) slots are visible.

I love how this pic turned out.

More here
And thanks for watching.
Check out my website - F1FromPaper
Top

Building the suspension is maybe the toughest, but also most satisfying area of the car. You've got so many constraints - mounting points, wing mounts and bodywork clearance. Also, the positioning has to be exact, because it will later define the rake and ride height.

​Firstly, the wishbones had to be constructed. But before I could start, I had to figure out the layout, which wasn't easy at all. Especially at the rear, where the lower WB sits at the back, and the trackrod is placed in front of the driveshaft. I got a lot of help on the MP4-30 topic, for which I'm grateful.
For the construction I used cardboard tubes (as usual), which were cut into the correct length and bonded with the help of paperclips. New was the addition of aerodynamic fairings, which definitely made the wishbones more realistic. Then, the brake ducts followed. Nothing special there, I just tried to work cleanly. A preview of the rear:

A further difficulty at the back was an unremovable bodywork panel through which the upper WB, the pullrod and the driveshaft should fit. I needed 4 attempts to get the curvature and slots right, but it was worth it. Only after glueing it in place and making the brake ducts with as many as 8 flaps could I mount the rear suspension.

Not much to say about the front:

Moving on, the brakes followed. I tried to be more precise than last time by including the uprights. They covered the paper clip ends protruding from the ducts. On top of them, the brake calipers and discs were mounted. Also note the neat detail which is the axle thread.

After the brakes were finished, I could go on and fit their covers. I'm satisfied with their quality, the carbon ring and the colour inner side are neat - a new circular layout was used to avoid wrinkles. Also, I tried to include vents as accurately as possible.

The current state of the car (after adding some 250 pieces)

Thanks for watching!
Check out my website - F1FromPaper
Top

Hi guys, it's been a while since my last post! Some real life tasks took care of my time, but now I should have more time to work on my model.

After installing the suspension in place, nothing more stood in the way of the bodywork. It consists of 3 panels - one on each side and one engine cover on top. The challenge here was to achieve such a shape that they fit without any gaps while still being removable.
I started with a rough template from paper. I then transfered it onto cardboard and tried to bend it into shape, adding/removing material where necessary. This I used as a final template.
The side panels have a complex curvature, so I had to cut the cardboard in order to bend it in several directions. I used the red decals to disguise the cuts, and only a slight line at their back is now visible. The side panels consist of 2 layers: a black thin base, which is covered with grey and then, in additionally cut slots, the red stripes are fitted. And finally, the details such as fins, were added.

The top cover consist of two halves. The red stripe masks the transition and gives it a clean look. I'm quite pleased with the curvature. You can see some supports on the inside, and the camera is mounted way stiffer than on previous cars - a little beam protrudes from it inside the panel. With applied decals and varnish, that's what I've got:

The panels waiting to be fitted: (it's actually quite nice snapping them in place)

That's it for now!
Thanks for watching