A low-nose for modern F1

Post here information about your own engineering projects, including but not limited to building your own car or designing a virtual car through CAD.
6 posts • Page 1 of 1

A low-nose for modern F1

Hearing of the rumored demise of front-axle KERS within the next evolution of the formula, and considering the technology's apparent packaging difficulty within a high-nose chassis, I began to wonder what a low-nose car, in the modern context, would look like. A low-nose chassis would allow the packaging of a motor & drivetrain below front-wheel centerline, rather than above it.

Dropping the nose down introduces various cascading after-effects, perhaps most significantly to the aerodynamic philosophy. Low-noses were specifically abandoned more than two decades ago in the interest of improving aerodynamic efficiency. A return to such a layout would entail not-necessarily a return to reduced efficiency, but would certainly entail a need to drastically alter the aero philosophy.

While illustrating this idea I also came upon a different interpretation of the 'halo' cockpit intrusion protection device, due out out next year.

Summary of the features proposed: 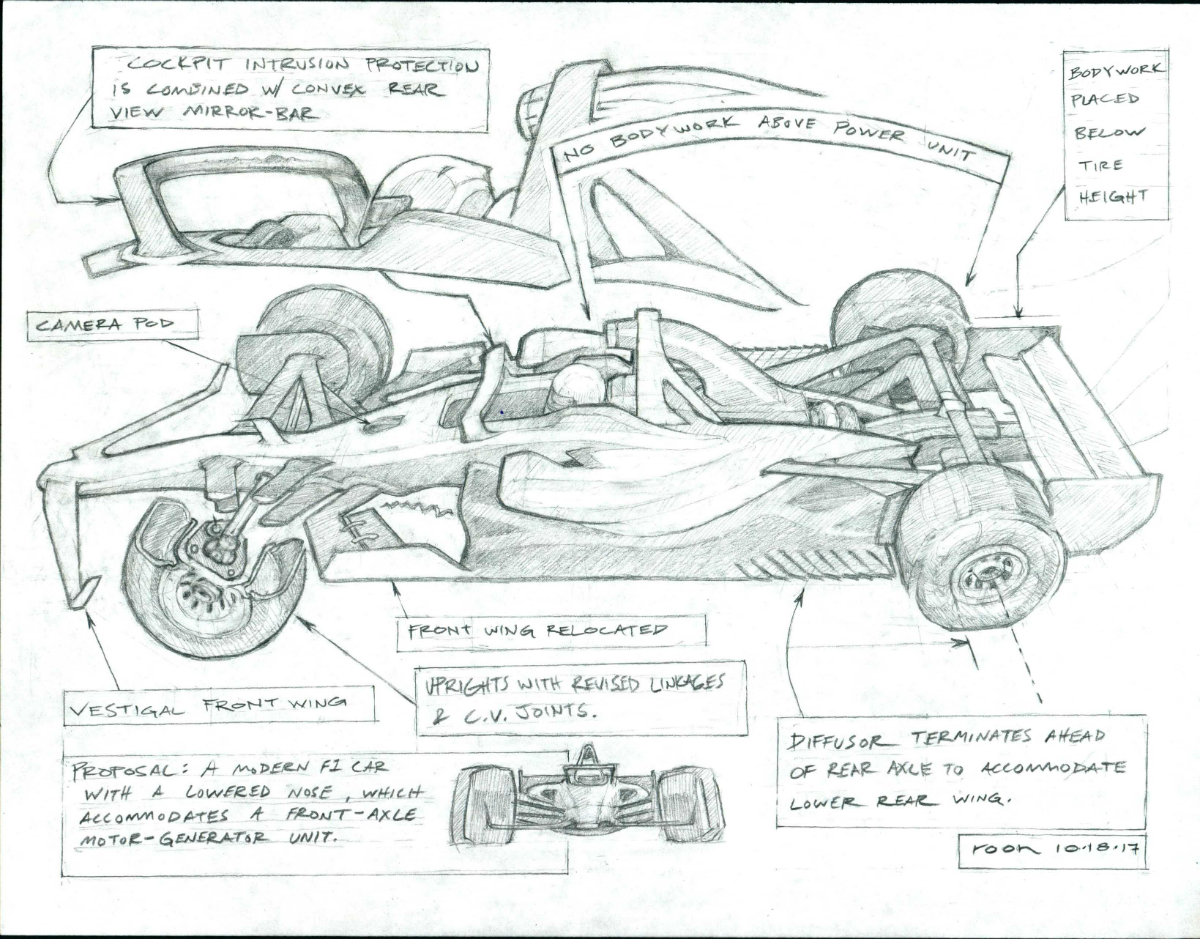 It would be more simple to just go for a larger diameter wheel and have in-wheel hub generators as part of a regen braking system. Motor/generators would allow for four wheel drive too which might be an interesting change.
Turbo says "Dumpster sounds so much more classy. It's the diamond of the cesspools." oh, and "The Dutch fans are drunk. Maybe"
Top

like much of it, especially open engine bay.
Top

Just_a_fan wrote: ↑
Thu Oct 19, 2017 8:25 am
It would be more simple to just go for a larger diameter wheel and have in-wheel hub generators as part of a regen braking system. Motor/generators would allow for four wheel drive too which might be an interesting change.

Adding all this unsprung weight will drive the chassis engineers crazy. The handling will be a nightmare. In-wheel motor-generators might be ok for trams, trains and Priuses but it is an absolute nightmare for motorsports especially Formula 1.
Top

Tommy Cookers wrote: ↑
Thu Oct 19, 2017 9:25 am
that would be importing another level of covert 4 wheel ABS and traction control effect
a pretence of neutrality based on steady-state characteristics - but the dynamic characteristic are inherently ABS/TC emulatory
if the load suddenly reduces the mapped torque (tending to wheelspin or locking) will not be developed as the synchronicity will fail
this would be happening in a wheel load specific way and so 'steer' when cornering

I'm ok with ABS of its recharging the batteries. AWD with vector steering, please!
Top
6 posts • Page 1 of 1