This forum contains threads to discuss teams themselves. Anything not technical about the cars, including restructuring, performances etc belongs here.
241 posts

On less that grey and black livery was just for the preseason tests. Then someone at Haas must have
noticed there were too many cars that looked similar to have their car standout.
it seems they decided to change the livery sometime between the 2 preseason test

I didn't mind the grey and black, but this one looks a bit better to me
Top 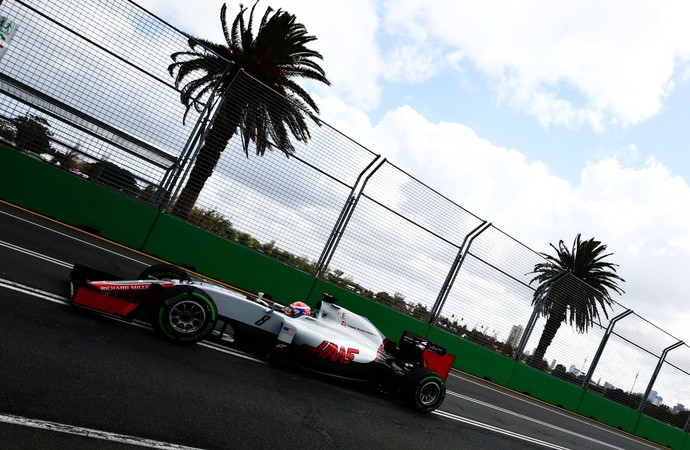 Might have to do with the local paint shop they used.

Does the video play for you?
To achieve anything, you must be prepared to dabble on the boundary of disaster.”
Sir Stirling Moss
Top

strad wrote:Might have to do with the local paint shop they used.

Does the video play for you?

Not at first, but worked the 2nd time I tried,
I didn't get to see that here in Canada so thanks for posting that
Top

The livery on this car is truly revolting.
Top

glad it worked for you.
To achieve anything, you must be prepared to dabble on the boundary of disaster.”
Sir Stirling Moss
Top

I think its a relief to the F1 world (and other inerested parties who could join the grid) that they could score points in the first race. Yes, the safety car threw them a life line, but Grosjean was less than 15 seconds back of Massa on the same strategy over 30+ laps, which works out to about 1/2 sec slower or less. Not too shabby. Maybe next time we'll get to see some pit stops

Ferrari: "last lap Kimi, all or nothing" *crashes into Bottas*
Top

I agree with Continuum! Haas has shown that it is possible to competitive right from the start, if you have the money, decent driver, the knowledge and technical packing from some big team.
Top

I would like to have seen what Xpensive would have posted here after this result.
Top

I will reply, as i was very very doubtfull of HAAS right from the start.
I'm having a full plate of raw crow to digest, and have a straw hat for dessert.

Amazing result, extremely impressed. Very happy with this result, very curious on the next couple of races to see where they really stand.

I'm thinking this car has much more potential than it has shown today. First of all, guiterrez doesn't do the car justice. I do not think he did anything wrong with the contact with Alonso,
but it gave them some exposure and on the other hand it took them an opportunity to show where both cars would classify in the race.

Grosjean did a stellar job, and though i think Grosjean is a very matured driver with decent experience and i think he brings a good amount of input into HAAS,
i think Guiterrez is not the decent 2nd driver to be paired. I understand the signing, but if HAAS really wants to gain all potential and make progress, they should adopt another driver
with more potential. To be honest, i think Kobayashi would have been a absolute great signing. Bruno Senna would even have been better - i dont concider Bruno bad, nor do i concider
Guiterrez trash, but honestly, Guiterrez underperformed. If he did better, he would not even have been in a situation where Fernando would have hit him and HAAS would perhaps even had 10 or even 12 points.

Either way, kudos to HAAS, and it proves that this way of establishing a new team - which you could concider 'cheating' compared to the older fashion [ given though, the revised rules made it possible ] - absolutely works.

I really hope HAAS will have more success and pave the road for more new F1 teams to join.

Guys Haas did not prove anything, neither did they achieve anything. They got the complete car from Ferrari in a dodgy deal that smells very fishy. It is no wonder they score points with this car. It is an offence for all those other teams that work their arse off to achieve anything with almost no money while they get a top car served on a silver plate from Ferrari. What they show is not the kind of spirit F1 teams should have.

So you would more like see HAAS entering and strugling on the end of the field? They did this to have a good start in F1. If the season goes well hey have more money and can start to be less dependent on Ferrari (or any other manufacturer). They eventualy starts to develop more and more stuff by them own and end up wiht engine and trasmission only from other teams...
Art without engineering is dreaming. Engineering without art is calculating. Steven K. Roberts
Top

This was clearly a great way to enter F1. As we have seen Haas struggle here and there, it is by no means an easy ticket. You must also come with a large amount of cash to do what Haas did and I do not feel other new teams could have accomplished this. Of the last 4 teams that tried to enter F1, (USF1, Virgin Racing, Hispania Racing and Lotus Racing) only 1 is still around. I would rather see more teams enter with the Haas model than to flounder around at the back until they disappear.

I also feel people who think Haas F1 "cheated" are crazy. It is harder to do what Haas did than buying and existing team. I feel what they did was somewhere between starting from scratch and purchasing an existing team.
Top

mep wrote:What they show is not the kind of spirit F1 teams should have.

Taking advantage of the rules to the fullest extent possible is exactly what F1 is about.

Beyond that, I see very little difference between the current Ferrari-Haas relationship and the beginning stages of the Red Bull-Toro Rosso relationship, one that has propelled the former Minardi team to heights it never could have achieved on its own.
Top

mep wrote:Guys Haas did not prove anything, neither did they achieve anything. They got the complete car from Ferrari in a dodgy deal that smells very fishy. It is no wonder they score points with this car. It is an offence for all those other teams that work their arse off to achieve anything with almost no money while they get a top car served on a silver plate from Ferrari. What they show is not the kind of spirit F1 teams should have.

Well, even if the car smells like Ferrari and is based on the Ferrari design philosophy, they have shown that they can ran the team and the car succesfully by themselves. There have been talks about the Customer car project. I think that Haas-Ferrari relationship has worked just as those projects were planned.
Top
241 posts