This forum contains threads to discuss teams themselves. Anything not technical about the cars, including restructuring, performances etc belongs here.
149 posts

sprint car76 wrote: ↑
Tue Oct 01, 2019 10:03 pm
Not thinking about the drivers more about the overall progress of the car. I really expected the car with the extra resources to be progressing a little faster. The big update they had has not seemed to make as much of an difference as i thought it would. Some of their races have been compromised by bad strategy and difficulties in making the right changes in qualifying. Next year with the added resources i think L stroll is going to be expecting a more competitive car or some people are going to be looking for new jobs.

I think they are doing about as well I could be expected really. They punched well above their weight for years and it caught up with them last season. Combined points they would have still had less than Renault.

This year McLaren and Toro roso have more points they are still well ahead of Alfa and haas and williams.

On driving ability I would suggest only Toro roso has a worse pairing all the teams above them have equal or better drivers. Toro roso are only really ahead due to the crazy German gp with kvayt getting a podium.

So are they really doing a bad job
Top

sprint car76 wrote: ↑
Thu Sep 26, 2019 4:00 am
Beg to differ. Why would any team mid field team leave their driver out, knowing that once the leaders caught them there driver was going to lose any advantage they had gained by staying out. Makes no sense. If they were going to be on a one stop like everybody else they needed to max out their strategy by pitting when the leaders got to them to minimize any time that they would lose. Every second counts and that is why teams like toro rosso, racing point, and renault ended up where they did.

That's all well and good but again if they pit Stroll he pits into 14th and he's got no realistic shot at even a single point. In 5th, a crash that blocks the track and a red flag, he gets a completely free change of tires, starts in 5th and might well finish 5th, even higher if there is a crash ahead or he gets a good run on a restart.

when you have literally nothing to gain from pitting, but even low chance of events that help you out, staying out is a no brainer up to the point the tires would be failing. There are multiple things that could have helped them out while they ran out front and basically nothing that will help them if they pit at that point.

Every second doesn't count, they were 14th, that's zero points, for a team with enough points that an 11th or a 20th place is functionally the same to them. If you have 5 or less points, only 1-2 points finishes and are fighting between 10th and 9th in the championship an 11th place over a 12th could seal you millions, for Racing point, nothing, absolutely worthless. So gaining seconds by pitting earlier to come out 2 seconds behind in 14th or 30 seconds behind in 14th or in 20th makes literally no difference to them. From 5th though there were several scenarios that could have ended up with them getting multiple points. It's a complete no brainer to keep people out at such a track with basically no overtaking. At no stage ever in the race could an earlier stop have brought them back out in the points or anywhere near the points.

At a completely different track with actual overtaking then yes, seconds actually count because with a shorter second stint and good tires he would have had every chance to potentially come back through the pack in Singapore... nope.
Top

Staying out and hoping for a for a caution or a red flag is not racing. If that is your best strategy then why bother. It was dumb strategy when merc used it and it's equally dumb when point racing is banking on it. Fighting with the leaders gave stroll no chance at all. The amount of time you lose on that track would be the same as throwing out an anchor for a few laps. I don't care if it was williams, your team should be trying to devise the best strategy for you no matter what position. Point racing in that regard hasn't been the brightest team when it comes to plotting on the fly the best strategy for either of their cars.

As far as the point system only awarding points to 10th is another dumb rule. If your racing from 11th on back you might as well park since you are not getting any points and at the end of the year for a team like williams it was a waste of resources being there. For the drivers all they get out of it is to be in the fastest race cars in the world for 2 hours and having nothing to show for it. Give points to last like any sane series would so there would be something for the drivers of mid pack racers would have something to brag about. "best of the rest champion"
Top

Because the race ended a lap too soon there is nothing in the rules that says he must make it back to the pits other than they must have enough fuel to do so. Which I assume he did
Top

So the biggest motorsport money series doesn't have a backup computer??? This doesn't even happen at my little track that i race at. Too funny.
Top

Can RP successfully defend 6th position?
Renault is almost out of reach at this moment unless RP scores loads of points miraculously.
RP is a one driver team & all hopes on Perez to have 2 descend weekends where he holds TR boys.Going to be interesting.
Top

Stroll is a weak qualifier but his race pace is decent. If he qualified higher maybe he'd be closer at the end of the race. Perez was on the level of Ocon while they were together, so no surprise there's such a disparity.
Saishū kōnā
Top

Any news on the factory they are building? Will they all be in one building for the next car? Anybody.
Top

Racing Point have got permission from the council [South Northamptonshire] for the new factory build. They anticipate ground work will start early next year and are planning on moving into the new premises during the summer break of the 2021 season [this probably won`t happen as building work nearly always over runs].

So it will still be a while until the fruition of the project comes to the fore but it`s great to see a team commit to the future by building new state of the art facilities. They will still use the old facility but just for general stuff like storage, etc...

Daddy Stroll is certainly putting the cash in, good on him!
Top

Lawrence Stroll has made an offer for shares in distressed Aston Martin. GPToday can reveal that.

In the first half of 2019, Aston Martin lost £ 80 million. The share price is currently around £ 5, which is a lot lower than the peak of £ 17. The current major shareholder, Strategic European Investment Group, owns around one-third of the company.

The share of automaker Aston Martin went up sharply on Thursday after rumors about a possible bid from billionaire Lawrence Stroll. According to Autocar Magazine, the owner of the Racing Point Formula 1 team is preparing a bid to acquire a majority stake in Aston Martin.
This caused the automaker's share to increase by 18.25 percent to 5.95 British pounds (more than 7 euros). 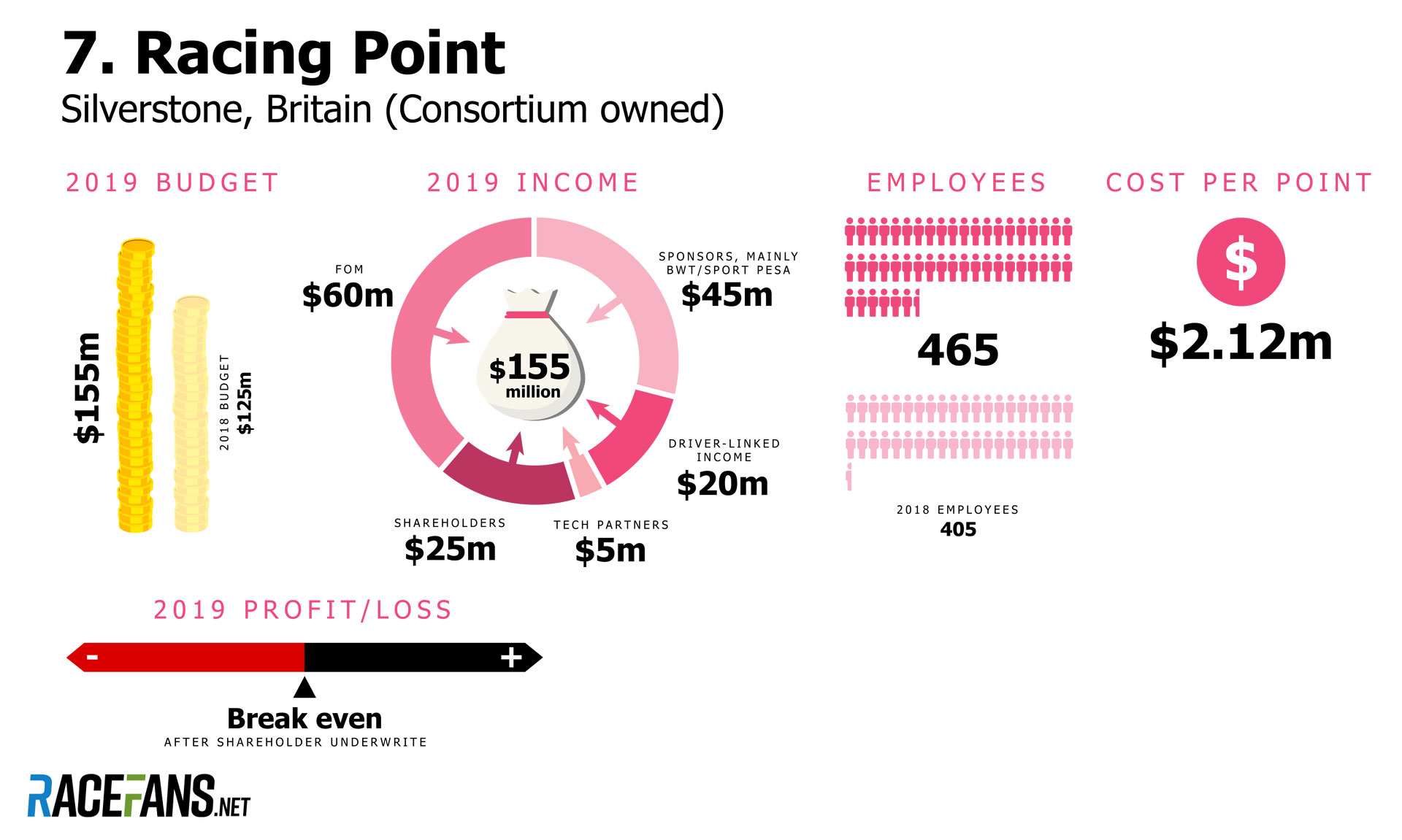 Aston Martin would make some sense; Daimler AG is a shareholder, and Mercedes-AMG produces engines for their road cars.
Top
149 posts