This forum contains threads to discuss teams themselves. Anything not technical about the cars, including restructuring, performances etc belongs here.
201 posts

Let’s not forget that at the end, Formula 1 is also a marketing exercise... BWT has to be thrilled with all of this... They say that there is no such thing as bad publicity and if they wanted eyes on the team and it’s sponsors, mission accomplished also.

On the other hand, I don’t think they really care what other teams think of them... At the end, Formula 1 has always been a cut throat environment with a very selfish attitude... I’m a Mclaren fan and even though it makes me an easy thinking that we may end up behind RP at the beginning of the season, I still believe that is a very smart move from them... At the end of the day, it’s the results that matter and just as we look in awe at the designs and innovations from other teams (Red Bull, Mercedes, Ferrari) that most often than not are in the limit of the regulations or playing dangerously in some gray areas, Racing Point has follow that same path with a very different approach... In F1, as long as it’s legal, it’s fair game and what they’ve done seems to be just that... Is it their own innovation? No, it isn’t, but it seems that they have been the “smartest” ones in the midfield to do this... There is a lot of truth when they say that they don’t understand why someone else haven’t done this before and that’s a very valid point... All of those backmarkers through the years could have easily competed a bit more with the rest of the grid if they would have follow a similar direction and who knows, we could have had the Caterhams, Marussia and others still in the grid today if they would have done something similar to this.

I would assume that this requires huge funds and technical expertise to accomplish what they have.

Love the idea of having more teams fighting for podiums.

This will be an amazing F1 season.
Top

This seems promising. I reckon that Ferrari will be ahead in Melbourne but RP leading the midfield firmly seems plausible.

Of course they will lead the midfield with the W10. Racing Point copied it to it's smallest details. Nothing impressive about that job in this regard and a shame the engineers didn't get the opportunity to build a car with their own ideas.

There is nothing shameful about it. Team understand its limitation and don’t want to indulge in wild goose chase; I call it smart. In order to survive in F1, it’s critical for small teams to set smart goals n stick to it.
RP have clear set of goals for 2020 – Lead mid-field battle & score few podiums. This design approach will help them achieve; it’s simple as that.

and in order for F1 to survive, with legendary teams that do it the right way, like williams, mclaren and even renault, this bs shouldnt happen. if a team cant get by developing a real race car from scratch, they have no business being in the sport. everyone will suffer in the long run because daddy stroll wants to buy his son a mercedes seat.
Top

They should do it like the other teams, by spending on sniping personnel???
Top

zoroastar wrote: ↑
Sat Feb 29, 2020 2:48 am
and in order for F1 to survive, with legendary teams that do it the right way, like williams, mclaren and even renault, this bs shouldnt happen. if a team cant get by developing a real race car from scratch, they have no business being in the sport. everyone will suffer in the long run because daddy stroll wants to buy his son a mercedes seat.

yes they have to do something, now Lawrence has taken it to the next level, but it's not his fault, it's what FIA decided, to get Haas in and help Alfa and Alpha Tauri. So now it's just that Lawrence is doing it well, with 500 staff and a full proper F1 team.

there've always been customer teams in F1, it's where to draw the line and how to manage it. You can't have only huge manufacturers you'd never get enough teams

but the solution might be on the way already, with the redistribution. They can follow that up by increasing the Listed Parts again and not allowing the combination of full drivetrain and suspension and windtunnel all from the same supplier

Meanwhile Lawrence is doing it well, by the sound of it, so we can admire that afaic and be grateful that he's probably going to trigger the change. There's a big update coming in Oz so this pink W10 will be history and it's going to be pink W10.5 at least
Top

Perez race sim.
ICYI it is one second a lap slower on avg compared to Ferrari. 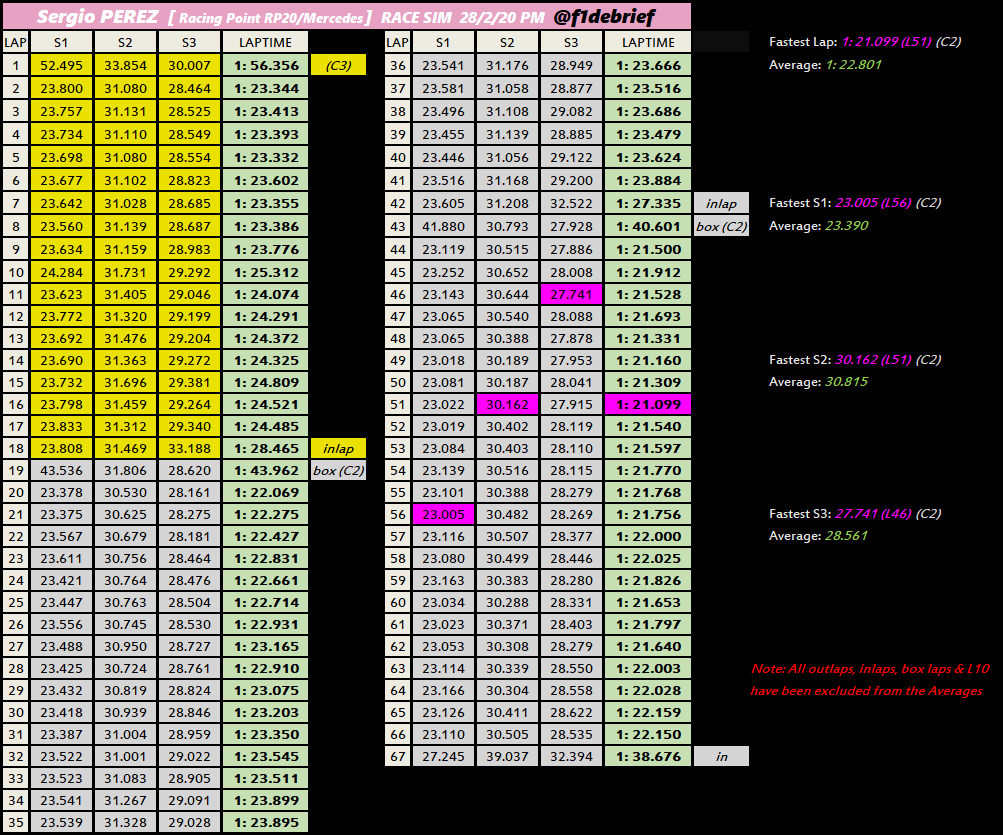 “We are a team that finished fourth, two years on the trot, with next to no money at all. We were absolutely hand to mouth, and we [still] finished fourth in the championship.

“We showed we can do that with next to nothing. So for people to think that take a team like that, inject money and resources in, and it wasn't going to improve is naive."___A.Green.

Picking up the driver discussion here from the car thread, before modly damnation descends

Racer X wrote: ↑
Wed Mar 11, 2020 10:29 pm
Checo had podiums Hulk did not in more then one car. Also in the same car that Hulk did not. So the way i see it Perez is above Hulk just like Daniel was above Hulk, i think Hulk was overrated i think people took Hulks potential into account when considering how good he was. Where as with Perez they ignored his podiums as not* relevant when considering how good he is. Stroll is in a similar position as a Gentlemen racer where you have to prove your worth with podiums and even then it might not be enough. Was Perez a pay driver... Yes he was but at this point hes been the most successful midfield driver and still people think some one like Hulk was his equal. I expect podiums from Perez and hopefully Stroll as well how many i don't know. Hulk would be lucky to be compared to being as good as Perez. The guy has taken cars with no business being on a podium to many podium finishes. I wish the same luck for Stroll. i hope those boys can stand on a podium together or at least celebrate each others.

i'm not saying Checo doesn't have some good qualities but Racefans' analysis puts him pretty level with Hulk:
https://www.racefans.net/2017/01/09/per ... ree-years/

Perez clearly raised his game after that. He narrowed the gap to his team mate in qualifying, though Hulkenberg still won that battle decisively by 35-24.

In the races it was a different matter. Having been beaten by his team mate over the course of 2014, Perez was Force India’s highest scorer over the past two seasons.

This isn’t a completely fair reflection on their efforts. Hulkenberg was the first man home more often than not, coming out ahead 23-22. And yet a podium finish still eludes him, while Perez has had one in each of the last three years.

That a fact which must rankle deeply with Hulkenberg. But it’s not something he’s likely to put right any time soon after moving to Renault.

*EDIT* I just think Hulk was either not pushing and he was holding back which means he has a mediocre mentality.
Or he was pushing to the limit and achieved mediocre results which means hes not good enough for F1.

In a series of announcements this evening (30 March), Aston Martin has now formally confirmed
F1 team Racing Point owner Lawrence Stroll will take over as executive chairman on 20 April.
A rights issue has raised £536 million and a further £150m will be made available to the company.

More information about AM today.
Top

‍
Aston Martin’s return to Formula 1 is confirmed. The 2021 season will see one of the greatest car brands,
Aston Martin, return to the grid as a works F1 team, continuing to operate from its base in Silverstone.

‍
On Monday 30th of March, the shareholders of Aston Martin Lagonda approved a £536m fundraising, underpinned by an injection of £260m of new capital from Yew Tree Consortium - a group of investors led by Lawrence Stroll.
As part of this investment Mr Stroll will become Executive Chairman of Aston Martin and Aston Martin will create its own works F1 racing team.

Tobias Moers has been appointed as the new Chief Executive Officer of Aston Martin, the Britain-based manufacturer confirmed on Tuesday morning.

Moers has been the Chairman and CEO of Mercedes-AMG since 2013 and has spent over 25 years affiliated with parent company Daimler, which holds a five per cent stake in Aston Martin.

Moers has replaced Andy Palmer at the helm of Aston Martin and will take up his new position at the start of August.

Aston Martin will return to Formula 1 in 2021 through the Racing Point team, which is owned by the car maker’s Chief Executive Lawrence Stroll.