This forum contains threads to discuss teams themselves. Anything not technical about the cars, including restructuring, performances etc belongs here.
34 posts

Mika Salo has indicated that Ferrar’s cheating in 2019 resulted in a punishment which harmed customer teams in particular Alfa Romeo.

Ferrari were investigated at the end of 2019 for fraudulent practices with the team finding a way to illegally influence the fuel flow gate, which allowed them to reach peak power when it otherwise would not be feasible. After the 2020 winter tests, the FIA and Ferrari reached an agreement, though details of the agreement were not disclosed.

“Alfa Romeo suffered from Ferrari's misconduct last year,” Salo said on his Twitch channel, “because they had Ferrari engines and had to use less gas, so I think Alfa will be pretty good this year when they get to use full power.

"I dunno if it's a new engine, but they're allowed to use it to its full power. Having to use less gas was their punishment for being screwed over [by Ferrari] last year.”

Fred, the start of a new season is always a moment of great expectations: this year even more so with the very short break we had since the end of the last season. How are your emotions right now?

This period of the season is always very exciting, it’s surely a time packed with emotions because we have been preparing the car for a month now and we are close to finally seeing it on track. We had a successful fire-up last week, so now we are ready. Every team on the grid has very high expectations right now: all the teams expect to do a good job in the winter and to be in a good position for the first race. It is like the first day when you are back at school.

How has this short winter been and how are the preparations for the new season going?

2020 has been a very strange season, with the pandemic obviously bringing a lot of disruption. It took a huge effort from everyone to be able to do 17 races: a great job by Formula One, the FIA and the team to pull this off. On the other side, 17 races within five months meant that we finished the season very late – in mid-December in Abu Dhabi. Now it has barely been two months and we’re ready to go back on track again: it means that the winter break was very short and, necessarily, very busy. Even if, in the end, we carried over a large part of the car, we still had an ambitious plan of development and wind tunnel testing.

The big regulation changes that were planned have been postponed to 2022. There are still technical changes taking place for this year, though. What do they mean in terms of the C41?

In 2021, we will carry over a car that shares the same philosophy as its predecessor, but there have been new regulations introduced for the aerodynamic package. This means we had to go back to the wind tunnel to develop our car according to these new rules. However, the changes we had to do pale in comparison with the ones on the cards for 2022. That will be a big change in terms of philosophy, and it means the team will need to focus on the 2022 project quite early into the season.

Even though the big regulation change has been moved to 2022, there is now budget cut in place: is this going to change the way this team approaches the season? Do you expect this going to close the gaps in the long run?

Our team will not be affected drastically by the cost cap introduced this season – I expect the situation to be much difficult for the bigger teams. We can say we are in a comfort zone when it comes to our budget, but we will still have to be very efficient with our expenditure: efficiency will now be the key word in our sport.

We’ve seen new partners join the team in the last few weeks, the relationship with many others has been extended and, of course, ORLEN and Alfa Romeo continue as title partners of the team. What does this say about the team?

2020 was obviously a difficult season for our sport in general but also for the world and the economy. At the end of the day, we can be proud to be in a situation in which most of our partners chose to stay with us and decided to extend the partnership with the team. It is a demonstration of the value this relationship brings to their brands and of the extensive collaboration between the team and the sponsors. We are also very happy to welcome new sponsors for 2021: it shows major brands have faith in our project and we share this optimism with them.

What are the team targets for this year and beyond – both on and off the track?

I think the philosophy upon which the team is based remains the same – we have to do a better job tomorrow than we are doing today. We finished last season in P8, so we have to target a better result in 2021. To do so, we have to keep improving in each department, trackside and back at HQ.

The team enters its third season with the same lineup. Stability is always good, but how is the pairing of Kimi and Antonio specifically going to help the team?

The collaboration between the team and the drivers is crucial in Formula One, and it goes beyond the level of the drivers. You need drivers who work well with each other and help the team progress: with Kimi and Antonio we have a good line-up, a good combination of drivers who complement each other and have a very positive and productive relationship – both between them and with the team. After three years together, we know each other well: we know exactly what the drivers want, in and out of the car, and this will be very helpful to continue improving.
"A fool thinks himself to be wise, but a wise man knows himself to be a fool."~William Shakespeare
Top 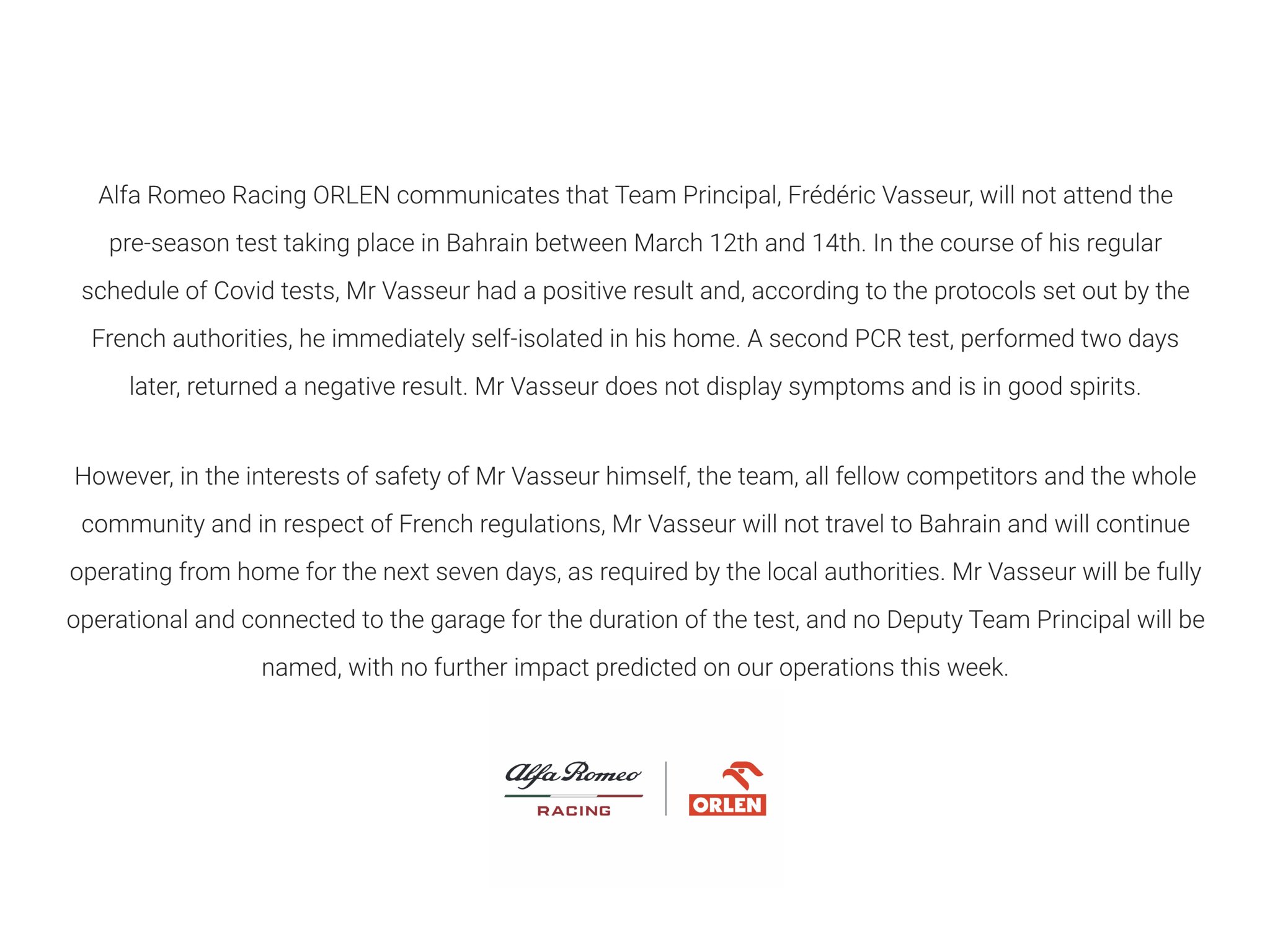