All that has to do with the power train, gearbox, clutch, fuels and lubricants, etc. Generally the mechanical side of Formula One.
3936 posts

I can assure you what seems like a good idea at ground level can often seem like like not such a good idea at 500 feet, when your own ass is in the seat. Having built and flown my twostroke gyro engine for many hours now, I know.
At least when the engine does stop in flight, and it has now, an autogyro is the best craft to be in, benign engine out landing characteristics. This video done by a friend of mine, not me.
Top

No Manolis, no profits, no production, no one is interested anyway but thats fine its a great engine on this craft and Ill continue to enjoy flying it myself. I have two more engines, Ill have to build up two more aircraft as spare, probably with MY Transfer Port Injection, mk1.

No Im back onto new Uniflow engine design, single cylinder, fitted into a YZ250F fame so I can trail ride it. Once again it will be a one off, for my own pleasure, no profit. It has some new never before see innovations that get around the Uniflows traditional problems. Clue, it needs no spark plugs and has no throttle body.

But the in immediate future Im finally ready to fire up my 360cc mk2 TPI engine, the one with the twin sliding gibs over the rotary disc valve inlet and the four injectors, an otherwise more traditional twostroke. Lock down is not so bad for me.
Top

Here is the Pal-V, the “production model”:

I am unable to figure out its supremacy, over Uniflow’s gyrocopter, that justifies its cost (US600,000$ according to https://newatlas.com/automotive/).

If from Uniflow’s engine the power was transmitted selectively to the rear wheels, too, wouldn’t make it a road trike, as well?

Several things, why do you want to drive on the road? With some mechanical " trickery " I can take off vertically with my gyro and land almost as well. If you are going to take power off the engine you are best to divert that to your rotor system, 14 to 20% diversion power to the rotor makes for a very efficient gyro.
As you would understand the autogyro rotor is driven by whats termed an air coupling from the pusher engine, not so efficient but adding a small amount of power makes a big difference. All along the engine out decent and landing performance remains benign, without that assurance I would not fly.
Top

It seems that the Pal-V creators lost, somewhere, their way. 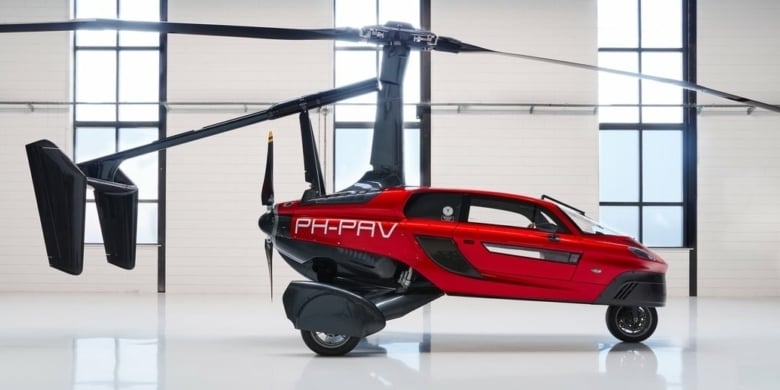 The Pal-V is like the centaurus who couldn’t decide what exactly he was (a man or a horse).

With 664Kg empty weight, the Pal-V is too heavy to fly, and too light/flimsy for the road.

With its high center of gravity (a lot of the weight is on its roof) and its only three wheels, it is not a good car.

It is not a good gyrocopter either: with some 300m take off distance, it loses an advantage of the gyrocopters: the almost vertical take-off.


When you get the time, and having real experience of making and flying gyrocopters, write down a few words about the substantials that the journalists cannot understand, and therefore cannot write, like:

the power transmission from the pusher propeller to the rotor through the air,
the “auto-rotation” / landing without engine from high altitudes, etc.

I might make my next one a jump take off. Power up the rotors to 150%, disengage drive, apply rotor pitch, jump, apply thrust and fly away. Rotor system will automatically go back to flying pitch in flight as the rpm drops to flying speed. Not for the fainthearted, once you jump you are committed.
This is where the twostrokes power to weight comes into its own.
Top


I can assure you what seems like a good idea at ground level can often seem like like not such a good idea at 500 feet, when your own ass is in the seat. Having built and flown my twostroke gyro engine for many hours now, I know.
At least when the engine does stop in flight, and it has now, an autogyro is the best craft to be in, benign engine out landing characteristics. This video done by a friend of mine, not me.

Dumb question... Why is it called an "Auto gyro" i get the gyro parts but whats so automatic about it?
🖐️✌️☝️👀👌

Because the main rotor is not powered. It "auto-rotates" in the slipstream.
je suis charlie
Top

Always wanted to fly an autogyro though, would be a nice change from the day job...
Top

Hello Manolis and uniflow!
Nice to see this innovavion's work on new engines!

By comparison with the world of drones, my opinion is that manolis personal air vehicle has little chance of success.
Today safety is very important and this concept does not have any safety system in the event of an engine stall. If you look at the existing aircraft that are implanted in the market, they all have a way to get to the ground safely after an engine stall, an airplane glide, a helicopter can autorotate, an gyroplane also glide ...

My bet is for hybrid systems, in a hybrid system you have small batteries that allow a safe and calm landing before an engine stop.

I am working on a personal drone project with a two stroke engine, I am only doing the engine. It is a two stroke 360cc engine and we want to get at least 22KW of electric power

I believe that 2T engines have a good future because they are light and simple and the efficiency is more than enough for certain applications, not for the street because anti-pollution regulations do not allow it. But even recently new dirt bikes with 2T engines have come into the market, I am a fan of two-stroke dirt bikes, lightweight and ultra powerful.

We are also developing an EFI for two stroke engines, http://www.loweheiser.com/ in tests we have achieved consumption close to 300 gr/kw.hr with a small UAV engine, perhaps not the 190 gr/kw.hr that a current diesel engine achieves, but the extra consumption is fully compensated by the reduction of weight.
Top

Is your EFI ready? Some indication of its cost?

Close to 300gr/kWh BSFC (Brake Specific Fuel Consumption) means some 25% BTE (Brake Thermal Efficiency); what was the BSFC in case of non-EFI?

Did you see the two independent engines (each driving its own pair of counter-rotating propellers/rotors) of the Portable Flyer?

In case of an engine stall (or of broken toothed belt, or of a fall-apart propeller) the other engine (with its own propellers) allows a safe landing.

There are additional safety means, too (read the Device Technical Report, at https://www.pattakon.com/GoFly/index.html )

About the Hybrid Flying Devices

What is the core, the fundamental idea behind the “hybrid cars”?

The spark ignition reciprocating piston engine had, and still has, a BSFC (brake specific fuel consumption, given in gr of fuel consumed per kWh of mechanical energy produced) that significantly varies with the load.

When the load is light / partial, the BSFC increases or multiplies.
If the engine could operate only around its minimum BSFC point (load vs rpm plot), the mileage would maximize.

A typical 200bhp (at, say, 5,000rpm) medium car engine works, most of the time, at light load.
For instance, cruising on a level highway at 60mph (96Km/h) and, say, 2,000rpm, it is required no more than 15bhp, which is less than 20% load.
Following the slow traffic in a town, the required power is even lower and the engine runs at even lighter loads.

What the Hybrid cars do?

What a hybrid system would offer to a Flying Device?

To make the problem more specific,
take the PORTABLE FLYER or the 2-seater POGO-FLYER (animation at http://www.pattakon.com/PatTol/POGO_FLYER.gif ) and replace the one OPRE Tilting Internal Combustion Engine by:
a pair of electric generators (each driven by a crankshaft of the other OPRE engine),
a heavy battery,
and a pair of electric motors, each driving its own propeller.

What makes you think that the electric / hybrid PORTABLE FLYER or POGO-FLYER is safer, or faster, or it can achieve a longer range or flight duration as compared to the original design?

On the contrary, the original version is cheaper and simpler (so more reliable), and more lightweight (the complete engine weighs some 8Kg / 18lb, several times lower than the weight of any battery / electric motor/generator set) and more efficient.

Because each time you transform the energy (from mechanical, to electrical (by electric generators), to chemical (in the battery), back to electrical (in the battery), and back to mechanical) there is an energy loss.
Put 95% efficiency (too optimistic) in each one of the above energy transformations, and you have an indication of the overall energy loss: some 20% of the initial mechanical energy is lost as heat.

I used nothing more than common sense and simple maths.


The above quote is from a discussion with another contestant in the GoFly / BOEING forum.

Some of the discussions were saved at the https://www.pattakon.com/GoFly/index.html and give a good idea of how much GoFly and Boeing were appreciated by the contestants.

Talking for the GoFly /BOEING, here is a youtube video after the "completion" of the contest.

I'll stick to my ''personal flyer'' gyro thanks. But next one will more than likely run ethanol, forget batteries, forget fossil fuels. I believe with some new technology its now more efficient (overall) to turn your electrical energy into synthetic fuel, from CO2, than to store it in batteries and reuse it. My dirty old fuel injected Kawasaki runs E85 very effectively.