Thanks JAW. The article mentions Corliss Valve as a means of intake throttling. More efficient than a butterfly valve. Do you have any good links/diagrams describing the Corliss Valve as an ICE throttle. (I did find many references to variable cutoff steam engines.)

The article makes me wonder about the point of RR wasting effort attempting to build a better Sabre. I know competition is good, but surely the war effort would have been enhanced if RR could have put all their effort into Merlin and Griffon while assisting Napier with supercharger design and airscrew availability. (Same goes for Bristol and sleeves). What a beast the Sabre might have been with 2 stage SC, contra-rotating prop and accelerated development to the state of reliability it eventually enjoyed.

GG, the aero manufacturers were very jealous of their IP, even during wartime.

Bristol spent millions of dollars developing the manufacturing technique for sleeves. They didn't offer to help Napiers, but were ordered to do so.

The early Sabres worked well - so long as they were hand built and fitted. Early production machines didn't fare so well - with excessive oil consumption and unreliability. The issues nearly sent Napier bankrupt. Rolls-Royce was asked to bail them out, but the Napier board blocked that. So it fell to English Electric to fix Napier and to sort the Sabre.

The first thing they did was to junk the exotic developments that were happening - which included a 2 stage, 3 speed supercharger - so they could concentrate on getting the core product right.

It may have been the snub by the Napier board which inspired Rolls-Royce to do the H-24 Eagle 22. But it wasn't their first sleeve valve design, nor their last.

The first Rolls-Royce engine with sleeve valves was the RR/D - a sleeve valve Diesel conversion of the Kestrel. This was done in conjunction with Ricardo. It was not a flight engine, weighing a substantial amount for the power it developed. It was also disappointing, not being very powerful (unsupercharged, Diesel and smaller capacity than the Kestrel) and breaking bits.

The next development was the RR/P - essentially the same engine, but spark ignition. These were around 1930/1931. 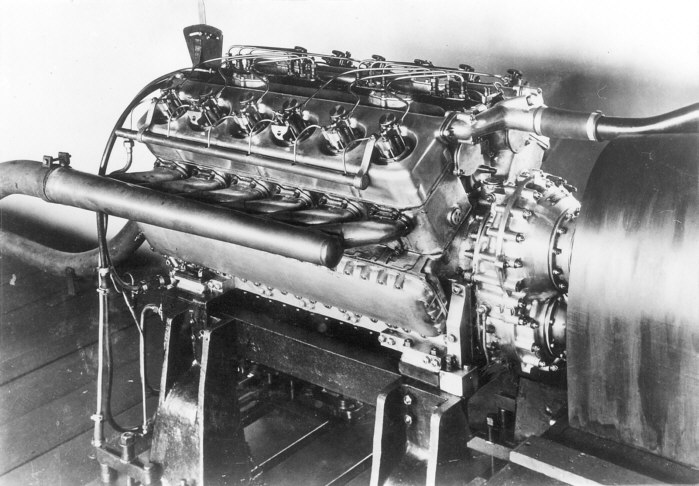 The Crecy started development as a Diesel, but was eventually changed to a petrol "sprint" engine. The origins of the Crecy project may have been the same as for the Sabre - development of a sleeve valve 2 stroke Diesel, driven by Ricardo.

Then, when the end of the war was in sight, the Eagle 22 was developed, followed by the Pennine. I would argue that a liquid cooled version of the Pennine would have been more compact, lighter and just as powerful as the Eagle 22.

Rolls-Royce were not the only ones inspired by the Sabre.

Incidentally, a pair of centreless grinders were diverted from P&W to Napiers, which thrilled the Americans no end.
Top

J.A.W. wrote:There were unfulfilled plans for Chrysler corp to build Sabres to fit Bell made Hawkers at one stage,
& no doubt those Mopar production engineers would've sorted out a viable mill, & likely fit a turbo, too.

Never heard this one before.

And Chrysler were busy building radials for P&W (IIRC) and devloping their version of the hyper engine - the IV-2220.
Top

Bishop rotary Valve - not a sleeve valve. Probably the best rotary valve design of all time. Based on the Cross rotary valve but had all the issues sorted. Fantastic performance.
je suis charlie
Top

gruntguru wrote:What a beast the Sabre might have been with 2 stage SC, contra-rotating prop and accelerated development to the state of reliability it eventually enjoyed.

Contra props on the Sabre would require an additional gearbox, since the crankshafts rotate in the same direction. In the Eagle they rotate in opposite directions.
Top

No difference there actually - the Eagle didn't utilise contra-rotation of the cranks to drive the contra props. The Eagle's cranks were geared together prior to the reduction takeoff (from the top crankshaft only). The front prop was driven from a simple reduction set and the rear prop via a layshaft then another reduction set.
je suis charlie
Top

Very impressive stuff. They could have just gone to the Roush roller cams and followers but the quad cam setup does have some performance advantages and probably worked out cheaper than the approved aviation parts from Roush.
je suis charlie
Top

& interestingly, although fairly few notable aircraft mills got DOHC setups ( viz: Napier Lion, Mikulin V12s),
the R-R Merlin SOHC design was an aspect identified by Ford as a weak point to be rectified by DOHC in their
proposed aircraft V12 that used the Merlin bore & stroke dimensions ..
..although Ford maybe went a step too far by deleting 'knife & fork' big ends - in favour of a side-by-side crankpin.

It was your link - and Cottams call their modification a "quad cam". A lot easier to say (or type) than DOHC per bank.

- Hey, no worries, I was only pulling your bloody leg anyhow G-G..
Its just that I find the term "quad (ruple) cam" - annoying advertising-type nonsense..

However, DOHC - even for apparently low revving aero-mills, was no mean thing,
- since the hugely hot-rodded Merlins used in Reno air ( & tractor, per link ) racing have a propensity
to 'dissolve' their valve gear when brutally caned..

The Napier Lion which was boosted from 450hp in regular aero-use to cope with an additional ~1000hp
for speed record breaking in the likes of Cobb's Railton Special certainly benefitted from accurate valve control..
(& the Lion, being a 'broad arrow' triple bank mill - would of course be a "sex (tuple) cam" engine - in 'ad-speak').
"I believe in the Workers Revolution & I believe in the Final Solution,
I believe in the Shape of Things to Come, & I believe I'm not the only one..."
: Pete Shelley (Buzzcocks).
Top 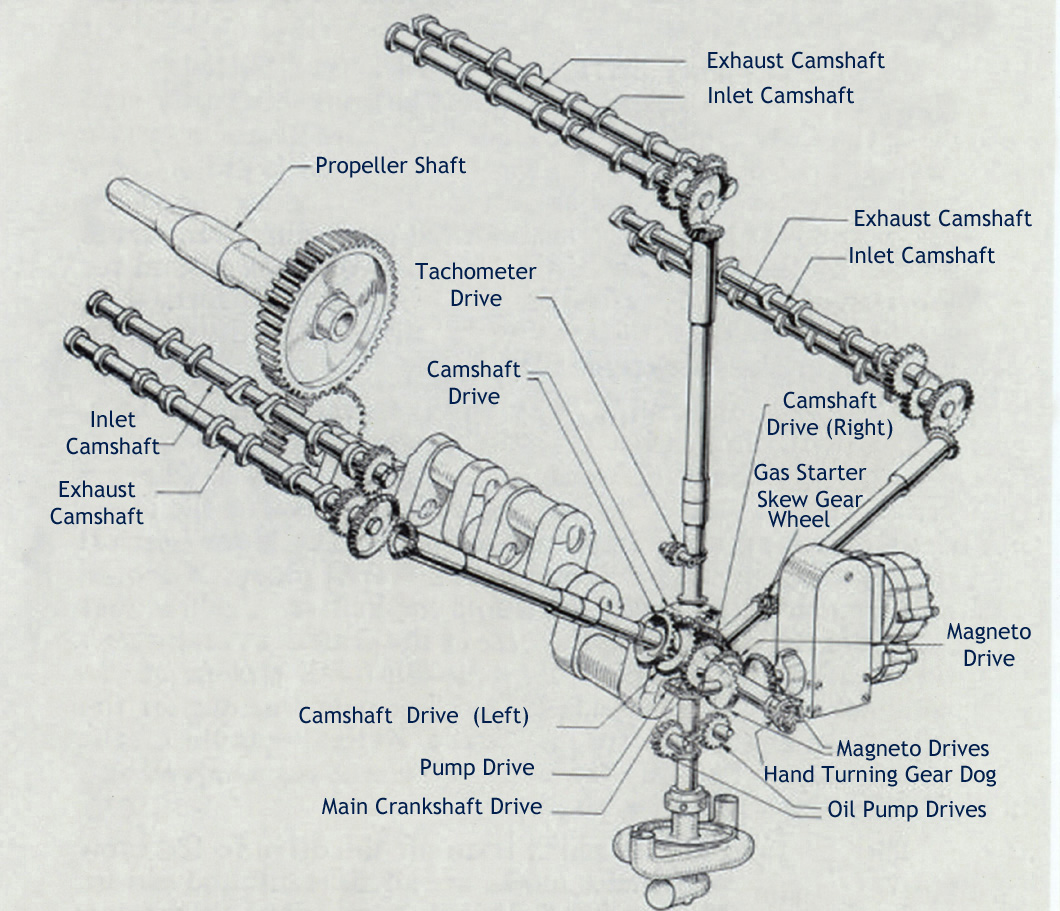 J.A.W. wrote:However, DOHC - even for apparently low revving aero-mills, was no mean thing,
- since the hugely hot-rodded Merlins used in Reno air ( & tractor, per link ) racing have a propensity
to 'dissolve' their valve gear when brutally caned..

Never heard that before.

In any case, the word is wear. The Merlin used finger followers with the cam acting directly on teh follower.

The V-1710 had a similar arrangement, but used a roller follower.

Valve control is more than just the actuating mechnism. The return spring arrangement is important too. The Merlin had, I believe, triple valve springs.
Top

Yeah, in reference to the term 'dissolve' - as regards really heavy duty race-Merlin valve gear..
..This term was used by a racer who had witnessed even the specially modified (stellite surfaced) cam followers
go that way (& far more overt than 'wear' in the regular sense)..
- & this - in the course of massive over-boost/revs - as applied in full-house race abuse..