All that has to do with the power train, gearbox, clutch, fuels and lubricants, etc. Generally the mechanical side of Formula One.
73 posts

Motorcycles usually use complex & power-sapping internal balance shafts, albeit neatly hidden internally..
..but the Nissan system ought to be functional for aircraft, & snow & marine craft - which have enclosed engine units..

Classic Ford 302 small-block V-8's had external balancers on each end of the crank. This was lighter and cheaper than fully counterweighting and balancing the crank inside the engine. Of course when you build a performance 302, you start by throwing out the stock crank and replacing it with an internally counterweighted and balanced crank.

Ford has offered their ~5 litre V8 in a number of different iterations, which even on the basic pushrod types
involved alternative firing orders, now of course they do a 'flat plane' crank in the OHC V8.

this is a good read
http://www.titanicology.com/Titanica/Ti ... eMover.htm
at that time the Yarrow, Schlick, and Tweedy method for the crank geometry was favoured
https://www.google.com/patents/US594289
but this seems to be the comprehensive view
http://www.sname.org/HigherLogic/System ... 3e4129d611
Last edited by Tommy Cookers on Tue May 30, 2017 10:02 am, edited 2 times in total.
Top

like all steam engines the Titanic's had crossplaneish crankshafts for starting etc reasons ie a car-type crank would have dead zones
there was compromise between angles for balance and the angles needed for steamflow timing and power sharing by the cylinders
the timing is somewhat like a compound locomotive's (eg the LP cylinders apparently don't act synchronously)
compromise was always unavoidable, though denied, as was the vibration of compound steam reciprocating marine engines
(the earlier triple expansion engines, having 3 cylinders, cheerfully and falsely claimed to be vibrationless)
treatment of the weights of the very different sized pistons was part of the fashionable design doctrines

early turbines eg Lusitania were ungeared and so very inefficient at low speed rpm (though incorporating a reverse turbine hadn't been a problem)
gearing was soon introduced so that the turbine rpm of subsequent ships was higher overall
Last edited by Tommy Cookers on Tue May 30, 2017 11:58 am, edited 2 times in total.
Top

T-C, re: the Napier Cub, notwithstanding that it was a seemingly capable engine looking forlornly for a useful role..
..since contemporary airframes were basically too primitive accept its size & power, to functionally useful value..

( Perhaps the British R-101 airship should've had the Cub - instead of monstrously over-weight/under powered CI mills).

Anyhow, the Cub does stand out as one of the few X-configuration engines - to have been a basically trouble-free runner.
Is the asymmetric angled architecture, a clue - to this unusually good conduct?

As for turbines in ships, these days gas-turbines - very similar to the large aero-engine units which are used in on-demand power generation plants - are also used in warships for 'sprint mode' capability - ( CI engines are still more
fuel efficient for normal 'steaming' progress ) as well as for power generation in new-fangled roles such as rail-guns..
Dr Moreau sez..
"Who breaks the law... goes back to the House of Pain!"
Top 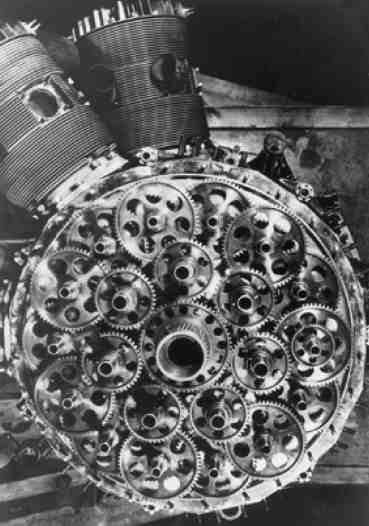 On another thread in the E,T & C section - the application of torsional vibration dampers to F1 cam-drives is discussed..

Here below, from 3/4's of a century ago, 'Flight' considers the application of such dampers to aero-engine crankshafts:

Slightly off topic, but does anyone know of a crankshaft nut design that uses slightly different thread pitch between male and female to stay done up?
Top

Which joint precisely?
If it's designed and torqued correctly it shouldn't loosen.
How much TQ does it make though?
Top

The large single nut on the end of the crankshaft that might hold on a pulley or gear or balancer.
Top

It shouldn't come loose. Is the male thread on the crank then?
How much TQ does it make though?
Top

Yes Tommy, I knew they had a coupling design but not the different pitch idea, so thank you.
Top

Yes- I think it was used on either the mercedes w25 or w125 (or both?). I saw the cranktrain displayed in a museum in Germany, impressive craftsmanship for that time.
How much TQ does it make though?
Top

a relevant exercise in industrial archaeology- and easier than alternatives