All that has to do with the power train, gearbox, clutch, fuels and lubricants, etc. Generally the mechanical side of Formula One.
9594 posts

stevesingo wrote: ↑
Fri Mar 27, 2020 12:21 pm
Another point is that these engines are not air limited. They run with excess air. More air may not equal more power.

No, but reduced pumping losses do equal more power.
There can be other benefits too, for example the pressure waves can be used to optimize air flow during valve overlap and decrease average combustion chamber temperature which can in turn permit more aggressive spark advance.
How much TQ does it make though?
Top

How the economy looks for now and next year, only step I can think of is a full engine freeze for next 2-3 years. Only to tinker with tuning and fuel.
Top

doesn't 6 equal-interval firings give a longer,heavier, thicker-cranked engine with more bearing loads, area, and friction ?
at current or any feasible bore:stroke ratio and cylinder spacing
(though maybe not at the frozen NA V8 dimensions)

As far as I understand, the best balanced V6 configuration is a 60° V6 with 6 throws 60° apart. But that would be longer, and have 7 main bearing as opposed to 4, so that would be increased friction, and a longer engine yes.

But there is also the option of keeping the 90° but just allow offset crank splits by 30°, and this would make an even firing engine which has better harmonics than an odd fire, and still only 4 main bearings. The reason I would argue for an even firing engine (besides sound) is that these engines have to last for many miles, and im pretty sure that excess vibrations is very bad for reliability, both on the engine side, and the electronics strapped to the engine. 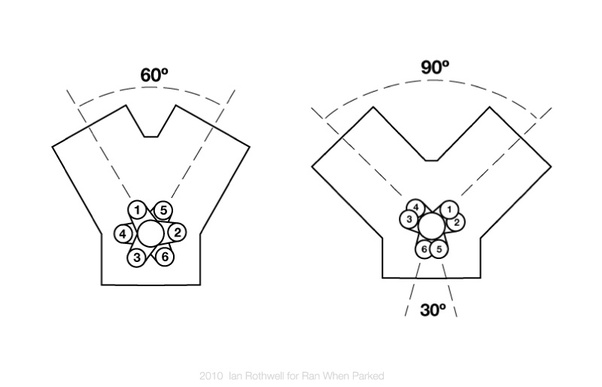 The biggest drawback is that designing such a highly loaded split pin crank while trying to achieve the minimum journal diameters dictated by the FIA would be a very, very expensive exercise. The split pin is essentially a very large stress raiser located very close to the throw maximum bending moment and will experience peak shear stresses too.

On top of that, the split webs would eat into the bearing land so all things being equal the bore spacing would have to increase.

I fully agree with TC.
How much TQ does it make though?
Top

It would be great if the rulemakers added two cylinders and went to a 2.13L 90-degree V8 engine.

You could proportionally increase fuel-flow to 133 kg/hour as well, for more power and excitement. What would the race fuel allocation need to be?

PS. How come flat-plane crank V8s are so popular in motorsport, even though they are supposedly unbalanced?

It would be great if the rulemakers added two cylinders and went to a 2.13L 90-degree V8 engine.

You could proportionally increase fuel-flow to 133 kg/hour as well, for more power and excitement. What would the race fuel allocation need to be?

PS. How come flat-plane crank V8s are so popular in motorsport, even though they are supposedly unbalanced?

My bad, I mean purpose-built racing engines like Cosworth, Mechachrome, Gibson, AER, Judd, the old Toyota & Honda Indycar motors, and so on.

Not the (many) categories using small-block Ford, Chevrolet and Dodge engines.
Top

An odd firing engine has a dominant order which is half that one of an equivalent even firing engine which means that the main excitation frequency is two times lower at any engine speed.

This makes the design of components subjected to torsional and/or linear vibration a bit more difficult.

I agree it can be hardly called a significant reliability issue.
How much TQ does it make though?
Top
9594 posts