Here are our CFD links and discussions about aerodynamics, suspension, driver safety and tyres. Please stick to F1 on this forum.
674 posts

Yes, youre right I forgot of this. Only if they can "hide" it in some clever way

Very unlikely, as the control units are sealed by the FIA.
Top

gilgen wrote:[I doubt that Renault need to improve reliability, as their engine is almost totally reliable.

I referred to cold blowing, something Renault engines use since 2008/2009. This has nothing to do with the blowing we've experienced in 2011. This cold blowing, which creates a similar noise like 2011, albeit by far not as present as in 2011, is what every Renault powered car still uses as Renault uses this for cooling the engine.

If, and only if the FIA banned exactly this sort of blowing, which I doubt they will because they've declared this legal in 2011 already, Renault would have to modify the engine in order to keep them reliable. It's as if the FIA would ban something for Ferrari resulting in reduced engine cooling....

To be ontopic for the RB8: I'm pretty certain RedBull nor any other team is currently blowing anything in an illegal way, that's why the new regulation will not hamper any team at all. With the exhausts in their new position, their efficiency / blowing potential is reduced massively.

Strangely, this winter there is so much paranoia and gloating....those who want the RB8 to fail post apocalyptical things about exhaust blowing etc.....those who want macca to lose claim their nose concept is conceptually just soo wrong....and Merc is either a WDC car or the dog of the year again.

Can't we stay rational without panicking and finger-pointing?
Top

gilgen wrote:[I doubt that Renault need to improve reliability, as their engine is almost totally reliable.

. It's as if the FIA would ban something for Ferrari resulting in reduced engine cooling....
Strangely, this winter there is so much paranoia and gloating....those who want the RB8 to fail post apocalyptical things about exhaust blowing etc.....those who want macca to lose claim their nose concept is conceptually just soo wrong....and Merc is either a WDC car or the dog of the year again.

Can't we stay rational without panicking and finger-pointing?

This....
“To be able to actually make something is awfully nice”
Bruce McLaren on building his first McLaren racecars, 1970

Mr.G wrote:As i understand this, they need to use illegal opening of throttle valve to achieve the required bolwing efect.

It is not illegal to leave the throttle open when at idle or off throttle. What is illegal is to partially close the throttle coming off idle and then progress to full open throttle.

From Speed. EBD clap down by FIA

Amid last week's Barcelona test, it was rumored that Mercedes and Renault-powered teams would have to make tweaks, after a loophole was discovered in the standard electronics software.

For 2012, the FIA has clamped down on engine exhaust blowing for aerodynamic purposes, but speculation continued to sweep the paddock that some teams had devised ways to minimize the impact of the ban.

Germany's Auto Motor und Sport reports that it was Mercedes engineers who found the loophole, in terms of how to utilize the standard electronic software to maximize the off-throttle exhaust blowing effect.

"The FIA has responded by rewriting the software," read the report.

Auto Motor und Sport said Mercedes was right about the loophole, but that it could only have been exploited at the price of dramatic fuel consumption, and potential damage to the engine.

"We have erred on the safe side," an FIA source is quoted as saying.

Fredy4 wrote:The sport is all about using loopholes to be faster and this is no different.

Is this only loop hole, or it is cheating? As i understand this, they need to use illegal opening of throttle valve to achieve the required bolwing efect. I'm not sure if I get it right, but this wasn't capable to monitor, so they (FIA) wan't to update the ECU software to be capable to chceck if everithing is allright.

If I understand it right this is from my point of wiev cheating not loop hole as there are regulations for the opening of throttle valve.

But maybe I understand it wrong. So corect me.

It's "creative engineering" if you get away with it. It's "cheating" if you get caught.
Enzo Ferrari was a great man. But he was not a good man. -- Phil Hill
Top

I fear that this is a ploy from the historic players (not going to name names as its speculation) as there is a concorde agreement on the table this year, now if the "Historic" players don't feel comfortable they may cause disruption for the 2013 season and further on by not signing the contract.

We'll see but I got a weird feeling in my gut (not an RBR fan just someone coming from a logical format).

We all know how Formula 1 teams love having an "Ace" in the hole.
If someone said to me that you can have three wishes, my first would have been to get into racing, my second to be in Formula 1, my third to drive for Ferrari.

Here is a clue. Some of the hot air reaches down there.. as you can see buy the number of temperature stickers it is very diffuse. hardingfv32 wrote:I wish to research what happens to the exhaust plume when it enters the atmosphere. What thermodynamic or aerodynamic word descriptions could be used to describe this activity? Using simple descriptions is getting me nothing.

When an exhaust jet exits into a cross-stream, the jet almost behaves like a deformable solid. 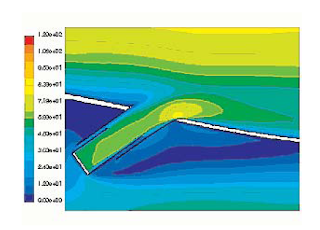 The very nature of that implies energy loss too. So you could argue that this type of exhuast has a compromise VS The exhaust that shoots straight backwards as seen on the RedBull. Of course it as all about how much is sacrificed to get the exhuast where you want it. Maybe Newey rather high energy in a not so fancy location VS low energy in a fancy location.
🖐️✌️☝️👀👌

n smikle wrote:...as you can see buy the number of temperature stickers it is very diffuse.

Hard to tell, but it looks like only the one has turned red.
Top

Here are my little CFD tests on the Mclaren MP4-27 exhaust as promised.

So on the car launch thread..

I thought the car was blowing the brake ducts..

I thought it was blowing the tyres..

I thought it was the beam wing..

I thought it was the diffuser...

Now here is the answer..at least what I think it's doing..

The Coanda effect is there.
IT is VERY SENSITIVE to air speed.

The coanda effect is stronger at low speeds and weaker at high speeds. In other words the exhuast plume bends down more at lower car speeds and is straighter at higher speeds.
My guess is that the faster free stream air tends to straighten out the exhaust at is more able to fill the low pressure pockets along the curvature of the car.

The exhaust is mostly deflected by down-wash and air coming in from the sides at higher speeds.

IT is SENSITIVE to engine speed.

Being sensitive to so many factors, Mclaren Could be another Renault Front exit exhaust situation on their hands... Maybe Newey's beam wing blowing is much more consistent?

The exhaust blows under the brake duct.
As we should expect. I mean, why in the world would you want 800 degree celcius air blowing into your brakes that you are trying to cool coming down to that 5 g braking zone? hehe

It emerges beside the diffuser..
corroborated by Mclaren's temperature stickers in the area.


Mclaren are effectively blowing the diffuser.

Kudos to those who guessed that the flow vis on the floor was being blown.

This car I got from Ringo which originally came from Machin. I heavily bastardized it. I have my own F1 car model but it is not finished..hehe..

I had been through about 4 different tries to accurately match the position and things like the brake ducts etc.

I have data at two road speeds- 30m/s and 60m/s. Please, the geometry is not exactly the Mclaren but the trend is there. The velocity display I cut it too 100 m/s so you can see the pretty colours. Exhaust speed out of the pipe at 225 liter/second and 850C is about 348 m/s.


So there you have it. This is only my estimations!

As for the results -