In such a short span of time, the Circuit de Catalunya is already near completion with the repairs to the burnt garage that the Williams team occupied during last weekends GP. Reporting to our colleagues at GPUpdate, a spokesperson said, "It hasn't affected the building – only the electrical fittings in the garage," which has made the process so quick.

Post here all non technical related topics about Formula One. This includes race results, discussions, testing analysis etc. TV coverage and other personal questions should be in Off topic chat.
75 posts

Caterham now say 4 of their employees have been taken to the medical center, one with a hand issue, and 3 with respiratory issues.

Another video of the fire, from the much better Sky coverage.

This is devastating, such a sad ending to such a fantastic day :/ I hope everyone is okay.
“Be clearly aware of the stars and infinity on high. Then life seems almost enchanted after all.”
― Vincent van Gogh
Top

Few more infos on the fire in the Williams box:

H&S will be looked at now.

This is what some people said could and would happen with race fuel at the start and KERS. Not sure if Refueling would come back, but it was one of the pluses as if a car went out early doors and the car got back to the pits and had a KERS problem whilst the fuel drain was happening.

I know from my training at work that fuel is something that needs to be respected at all times when unloading. I work in a petrol station, and have a better than average grasp on unloading fuel.

Is it time for the fuel unloading to be done outside before a KERS pack is unloaded from the car? Fire came from behind the garage, images of frank being rushed to safety. This was a very near miss.

Fortunately the fire started when the team were outside for the celebratory team pictures.

BBC has this image... 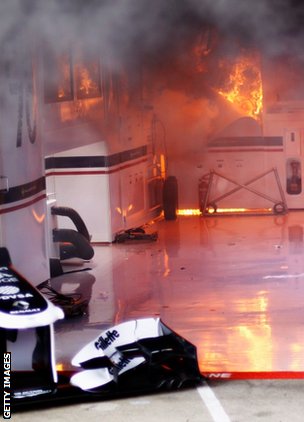 Wow, are there not overhead extinguishers in the pits?
Top

they are saying its a fuel canister that exploded, but no one knows what caused it to burst yet


t was initially believed that the car of Bruno Senna, sat in the garage of the race-winning team after it had retired from the race, may have suffered a KERS explosion. However the general paddock feeling is now that the blaze came from behind the partitions at the back of the garage as fuel canisters dramatically caught fire

thearmofbarlow wrote:Wow, are there not overhead extinguishers in the pits?

The tracks with the overhead dump sprinklers are as follows:

I think this will lead tracks to put in dump sprinklers or ideally new pit facilities as many tracks have dreadfully woeful facilities now. The Barcelona pit building is only 8 or 9 years old as it was upgraded in 2003/2004 and was fit for purpose right up to 2009/2010, however now they are quite poor for modern F1. Im sure that other series are watching this as when more series that have KERS go to Barcelona will be wanting to know if there is a specific safety breach or not.

The reports after this will be interesting to read, if they are released.
Twitter: @ESPImperium
BLOG: http://espimperium.wordpress.com
Top

Forgive my ignorance, but how would sprinklers play with KERS and / or electrical fires? Are they always a good idea?
Top

I, too, wondered why there didn't seem to be any response from an integrated fire suppression system, but put it down to perhaps a lack of agreement over what said system should be. Water is the last thing you want to put on a KERS fire, not to mention the damage in can cause as a result of a false alarm. Halon, and other compounds, are great for putting out most types of fires, but they're not always compatible with life or metal fires.