Here are our CFD links and discussions about aerodynamics, suspension, driver safety and tyres. Please stick to F1 on this forum.
68 posts

mzivtins wrote: So really, in an answer, tyre 'grip' is a good name for all modes of friction.

Shhh don't give away the big secret!

Ergo my sig.
Grip is a four letter word. All opinions are my own and not those of current or previous employers.
Top

So, is the 'friction coefficient' of a tire's contact patch increased by the grooves used at Indy?

Can you even say a tire has a given friction coefficient?

Since it´s moving around all the time?
"Il Phenomeno" - The one they fear the most!

Sure you can, it's just a function rather than a constant... no different in that sense than how much downforce or aero balance a car has.
Grip is a four letter word. All opinions are my own and not those of current or previous employers.
Top

Please correct me if I am wrong as I am sure people know more about this than me, but from my limited learning, I always was lead to believe that there are three (3) main elements to tyre grip (these are simply first principles and everything else is a effectively a derivative thereof):

As tyres are made of deformable rubber or polymers, these polymers are designed to work in optimum temperature ranges for defined time periods where their deformation and wear characteristics can be used to the greatest advantage for mechanical keying into and adhesion onto the track surface.

When all said and done,it all comes down to one thing, that is heat management and balancing all the variables to have the largest possible contact patch at the right temperature for the longest period of time. All the above parameters will affect the tyres operating temperature which alters its performance characteristics due to heat changing the polymer structure.

As for what is meant when a tyre becomes “sticky” it was once described to me with honey as the analog.

1. Imagine a tyre made from frozen honey;

2. When it’s still frozen it is hard and doesn’t stick to whatever it touches, but still retains its integrity as to shape and structure and works as a tyre;

3. Warm the outside slightly and a small boundary layer plasticizes and becomes “tacky” in that the overall structure will retain is shape, but the outside layer will stick to whatever it touches and leave a small amount of residue behind and on imprint on the surface. This is a sticky tyre at optimum operating temperature;

4. If it continues to be heated, this energy will work further into the structure and it will stop having a thin “tacky” boundary layer instead developing a thicker molten surface layer which will start to act as a lubricant between the hard inner surface and the higher energy, thicker and now slippery molten boundary layer. This is an overheated tyre that is effectively melting off the carcass;

5. Apply more heat by continuing to work the tyre and it becomes “saturated” or completely heat soaked. The inner structure loses its integrity and shape and as the structure can no longer resist either the centripetal or frictional forces applied to it, it de-laminate's and comes apart.

It’s similar to how a tyre reacts (if not perfect). As they get hotter, they become tacky or sticky and gain greater adhesion and mechanical keying increasing friction and performance or grip.

Too hot and the polymer loses its structure and it starts to “flow” as the bonds break down in the tyre and they degrade more quickly in what can become a runaway or cascade effect of overheating. This results in the tyres feathering, blistering or galling up. This reduces mechanical keying and adhesion, gives a smaller contact patch and you can also end up with what are effectively small rubber ball bearings between the tyre and the track.

So the most important thing I was always told about tyres is they can only give constant grip when they are at the correct temperature, so you need to balance all the other variables as best you can to maintain the tyre in its optimum temperature envelope for the longest period of time.
Last edited by aussiegman on Thu Oct 04, 2012 8:01 am, edited 5 times in total.
Never approach a Bull from the front, a Horse from the back, or an Idiot from any direction
Top

Thanks, 'gman. That's the best summary I've read around here in ages.
Top

I agree. It was quite easy to understand and didn't wind up on other unrelated topics.
Top

I asked for permission from aussiegman to use his honey paradigm to describe how a tire behaves, and wrote Part 1 of trying to explain F1 tires in my blog.
Have a look! I'd really like to hear what you think about it!

If you missed Part1 of my F1 tires series its here: http://technicalf1explained.blogspot.co ... art-1.html

The slip angle of a pneumatic tire can be defined as the angular displacement between the plane of rotation of the wheel (the direction in which the rim is pointing) and the path that the rolling tire will follow on the track surface. For the vehicle to change direction, regardless of road speed, each of the 4 tires of the vehicle must have some slip angle. 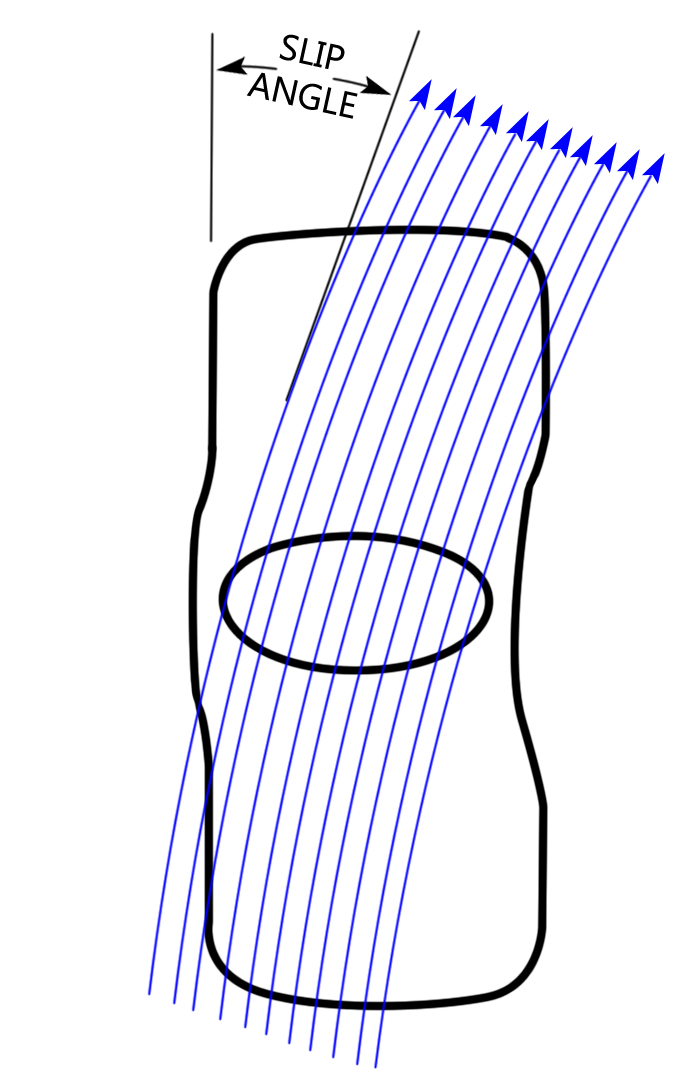 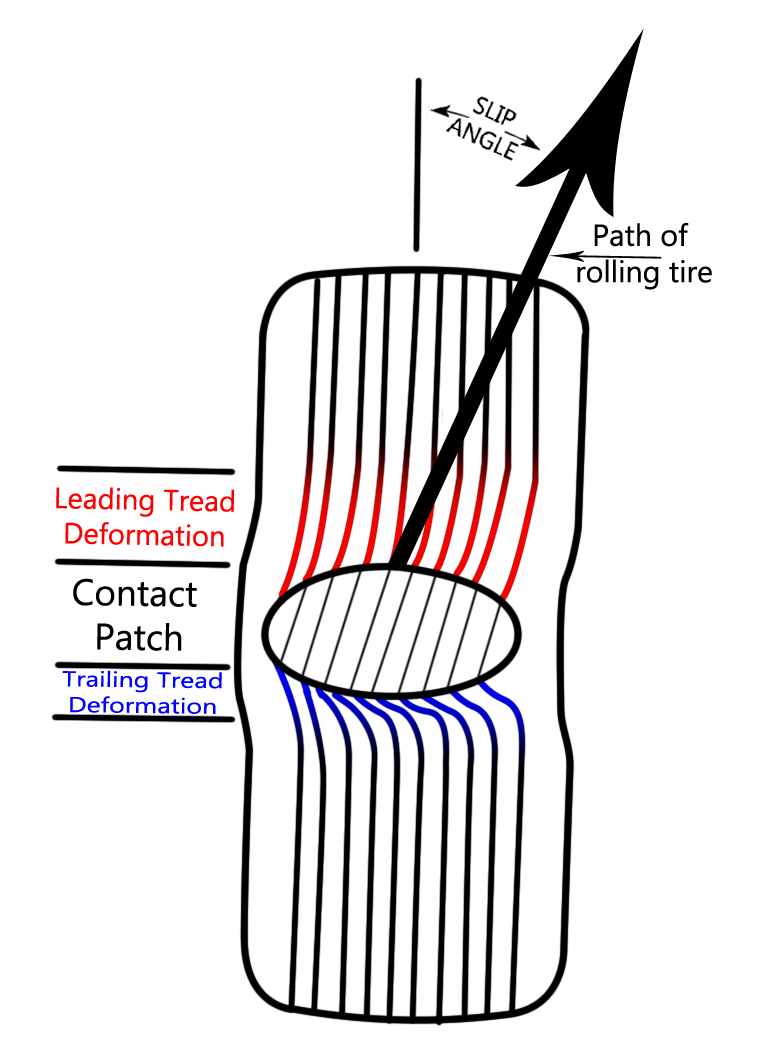 In order to proceed with the relationship between slip angle, coefficient of friction and the cornering force, it has to be noted that grip from a racing tire is developed by a combination of mechanical gripping on the road surface irregularities and by molecular adhesion between the tread surface and the track surface. The molecular adhesion itself comes into play at very high loads and coefficients and it is the reason behind being able to leave black marks on the track when the car is neither spinning or locking its wheels or sliding. 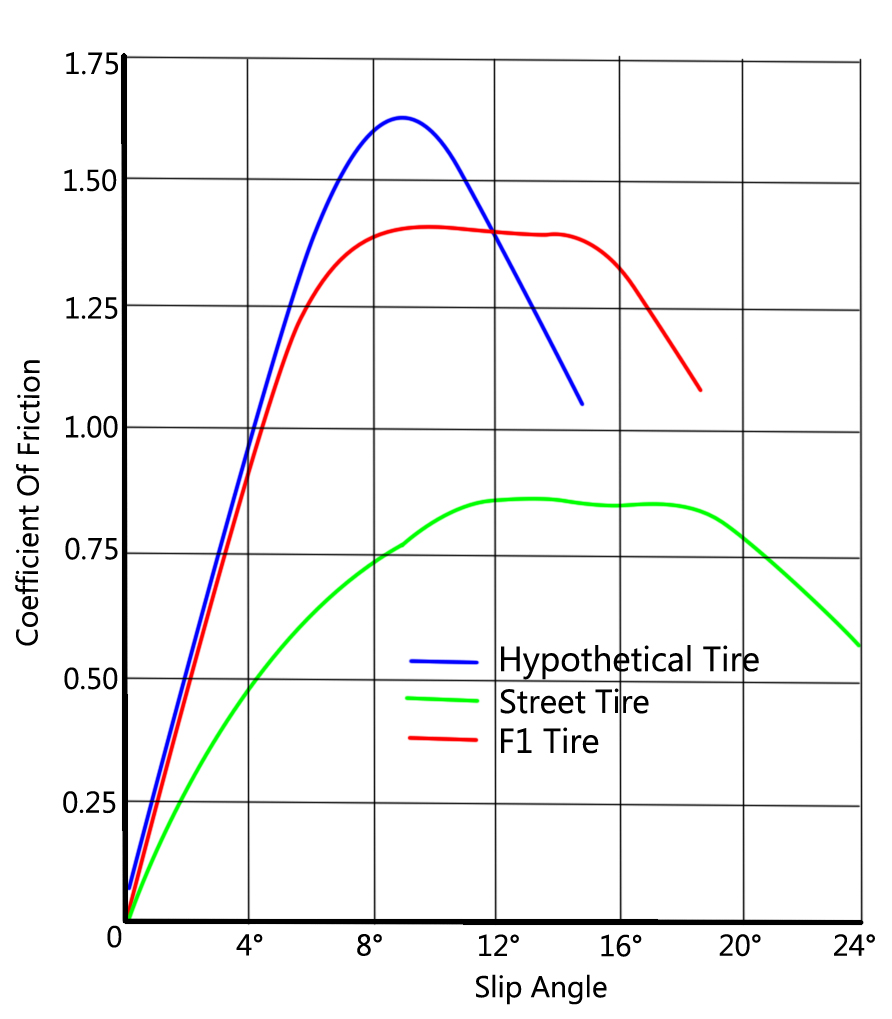 An ideal tire will give a linear, high gradient curve at the beginning so that the coefficient increases rapidly (so that the driver can build up cornering force quickly) with increasing slip angle and then levels off gradually with a reasonably flat curve for the widest range of slip angles possible (for the driver to be able to get as close as possible to the limits of adhesion). The segment of the curve at the top where an increasing slip angle does not change considerably the coefficient of friction is called the threshold range. The expected downward slope of the curve has to start off gently so that the driver can feel it and react accordingly. If the curve would plunge down suddenly then the driver would spin off the track. For example if the curve of the tire would look like the hypothetical tire curve, even the most daring, experienced and talented drivers would not be able to exploit the maximum potential of the tires. A tire with this graph would be a very, very inefficient one. In reality what happens at the point the curve starts sloping down, the tire is running out of elastic capability and is starting to slide, a further increase in slip angle will get the car into a bigger slide while the elasticity of the tire would continue to decrease. A high slip angle will generate more heat than a low slip angle. If heat is generated beyond what is needed to get the tire into its optimum operating temperature, the tire deteriorates and there is no contribution to performance.

Vertical Load VS Coefficient of Friction

A tire’s coefficient of friction decreases as load increases. However, this does not mean that traction decreases. Traction will increase with an increasing vertical load.
This effect is illustrated in the graph below: 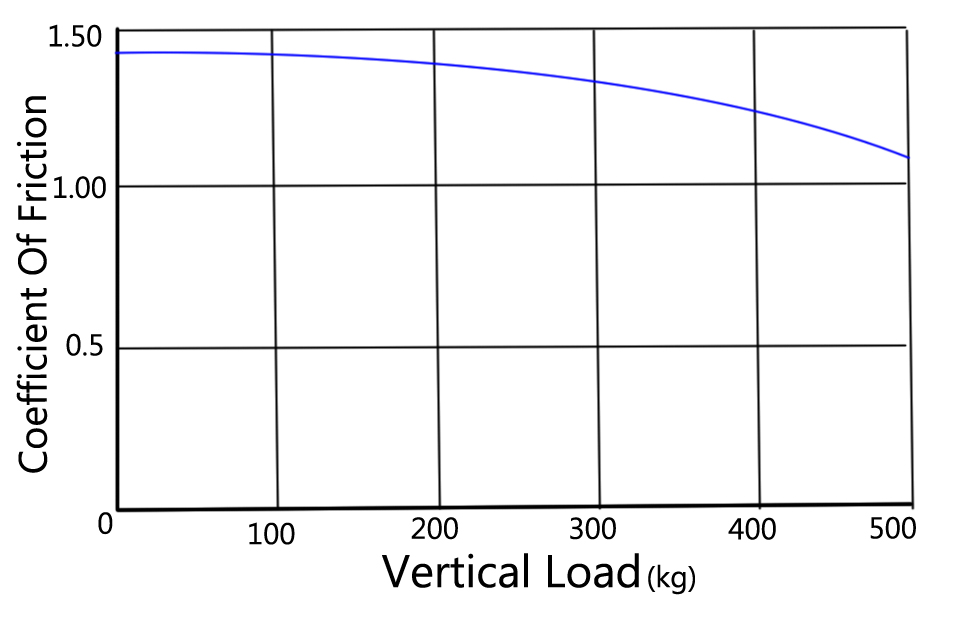 To explain this in simple arithmetic, let’s assume each rear wheel had to support a load of 200 kg, using the formula described in Part1 (ForceOfFriction=μ CoefficientOfFriction x Normal Reaction), 1.35 x 200 kg = 270 N, times 2 for both rear wheels gives us 540 N. However if we add 50 kg per wheel because of load transfer, then (1.33 x 250) x 2 = 665 N and if we add the effect of the rear wing, which for example gives 200 kg of vertical load to each rear wheel, then (1.26*450) x 2 = 1134 N. So despite the decreasing Coefficient of Friction, the force developed increases as vertical load increases. The truth is it is not that simple, but the point is that increasing vertical load decreases the Coefficient of Friction and increases the traction capability of the tire.

μ....
"You need great passion, because everything you do with great pleasure, you do well." -Juan Manuel Fangio

amouzouris there are at least two mistakes in that post. please check it before posting it.
Top

Just about all of those illustrations look like they're copies or "traced" digital versions from Carroll Smith books. Have definitely seen them before.

Give credit where due...
Grip is a four letter word. All opinions are my own and not those of current or previous employers.
Top

Jersey Tom wrote:Just about all of those illustrations look like they're copies or "traced" digital versions from Carroll Smith books. Have definitely seen them before.

Give credit where due...

Well..you are not mistaken..they are similar to Caroll Smith's illustrations but tehy are not his...because of copyright rules i made my illustrations which are similar
http://technicalf1explained.blogspot.com/
Top

Greg..as far as my second sentence is concerned..which i assume you mean "For the vehicle to change direction, regardless of road speed, each of the 4 tires of the vehicle must have some slip angle." it is not wrong..and i can prove it..

have a look at the following graphs..(they are not mine) 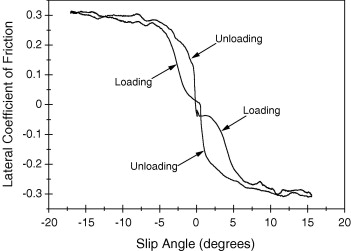 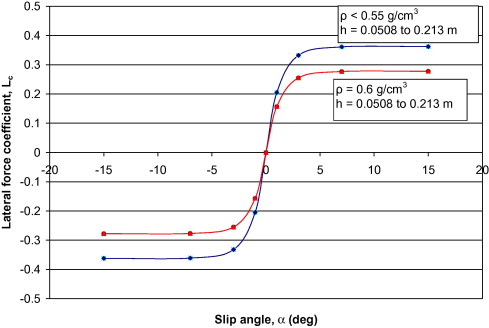 
They support what i have written...can you highlight any other 'mistakes'?
http://technicalf1explained.blogspot.com/
Top
68 posts