Lewis Hamilton made the best getaway as the lights went out, and led the Hungarian Grand Prix from there on. Team mate Nico Rosberg was close at times, but never really managed to set up a passing move. Daniel Ricciardo finished third for Red Bull Racing.

sosic2121 wrote: dear lord, will you stop with rosberg.

How about you stop. I mean stop complaining because people aren't saying what you want to hear.

what spain has to do with rai/ves crash?
Top 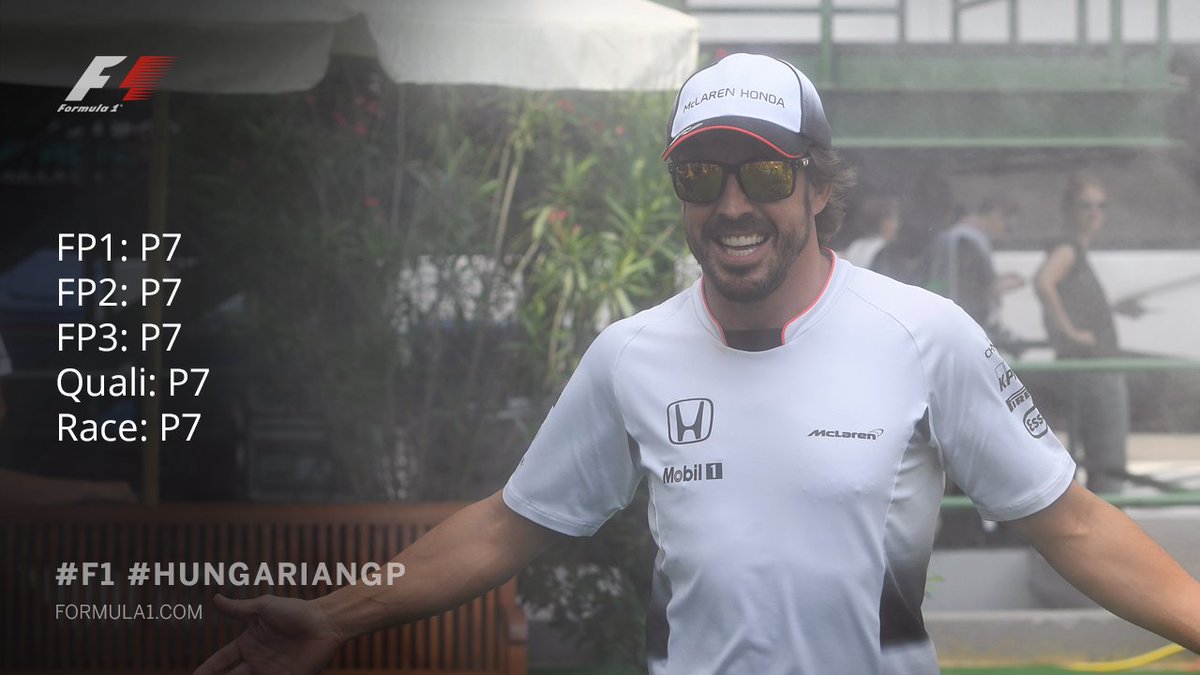 . Kimi was trying to sell a dummy with that double move and failed miserably.

.
And I could not agree more. Kimi is the one that thought he was being cute. All he had to do was wait keep the pressure on Max and force a mistake.

Moose wrote:Interesting that Hamilton took a few swipes at Rosberg's pole lap in post race. Apparently he's also gone to Charlie Whiting to make sure that no one ever gets allowed to set a purple sector, and a pole lap having run through double waved yellows.

And fair enuf too, Britney claims he was 20kph slower and this equals "significantly slower", personally I think this is total BS and getting a purple sector under yellow or double waved yellow should automatically cause you to lose your lap and possibly even get you a grid penalty.
The impossible often has a kind of integrity which the merely improbable lacks.
Top

sosic2121 wrote: dear lord, will you stop with rosberg.

How about you stop. I mean stop complaining because people aren't saying what you want to hear.

what spain has to do with rai/ves crash?

The topic at hand was where people think/thought the FIA and stewards weren't doing a proper job of applying the rules.
183 103 103 7
Top

. Kimi was trying to sell a dummy with that double move and failed miserably.

.
And I could not agree more. Kimi is the one that thought he was being cute. All he had to do was wait keep the pressure on Max and force a mistake.

Personally this is how I saw it, I thought the move into turn 2 was him attempting to fool Max and screwing it up hurting himself in the process. Lets say Max hadn't moved back left(which wasn't much anyway) and Kimi rammed up the inside, he was most likely going to bump Max and take a really crap line in the corner as he was too fast to take such a tight entry.

The second one, while moving under braking is slightly bad, he basically just waiting for Kimi to make a move left it open then intentionally gave him a scare to put him off. he only jinked right briefly, Kimi(or anyone making an overtake) should be prepared for a driver to move the same direction they choose to go, unless he's alongside the lead driver has every reason to move across. Kimi could have moved further across but he chose to probably over react, switch back and it messed up his braking so he went very wide. So what, Max waited and baited him into it then kimi made a mistake, I thought it was frankly veteren level defence from Max.
Top

munudeges wrote: He completely misjudged his braking to Grosjean in front who had fading tyres and almost killed himself. He then proceeded to mouth off at more experienced drivers who told him he was at fault.

He misjudged braking, there isn't a driver in the sport who hasn't as yet, the only ones that haven't caused a problem with it is frankly those in cars so slow as to almost never be attacking anyone(Manors basically).

As usual old big mouth decides to stick his giant nose into other peoples business and start talking about inexperience, having to learn and how wrong he was.... Massa, the guy who in a decade hasn't learned to not just turn into a car on his inside. In 2014 Massa turned in on Magnussen, flipped his own car over ruining his own race and as usual blamed the other driver.

Max has probably watched a decade of Massa smashing into people, failing to learn and thought Massa calling him out on his accident was completely hypocritical. Good on him for 'mouthing off' about it, Massa needs to learn to accept responsibility for his own accidents before insisting on loudly commenting on everyone else's accidents. If I was in Max's place I would tell Massa to stfu as well, pretty much every other driver should do.
Top

I must be blind because I clearly saw Max moving twich where he was braking. And I think the did two times in few laps. But it seems that Max can do what they want and he wont receive any penalty.

Button´s penalty was stupid but lets be sincere, I was not surprised since the rule is stupid itself. It was a clear case of security risk.

Race was classic Hungary, boring but strategically interesting. Hamilton did a slow race on purpose though the team wont say clearly. But that radio conversation between him and the team was a clear sign that the team was not happy with what he was doing.

Anyway the controlled perfectly well the race and he was the faster one, clearly. Even with Rosberg doing a better start I think he would have won.

Nico needs to make an extra effor if he wants to win.
Top

Jolle wrote:It was "annoy Nico" mode for Hamilton after the race, with statements about the grid girls, that he detuned the PU and a big "double yellow", where he got everybody to join in.
Not Rosberg's nicest weekend, he got a new contract but Hamilton played the "I've got you covered" message out loud and clear. Fun to watch!

Lewis learnt well how to play a psychological war from Alonso who loves to do it. Dont like it too much because I prefer drivers who only speak on the track.

Too bad that Hamilton and Alonso wont join the same team because it would very fun to watch.

If he was so fast he would have just passed Ric!

You saw how "easy" it was for Hamilton to pass Gutierez, even when a second a lap faster, while managing tyres and engine, under blue flags... You don't "Just pass" someone at the Hungaroring.

Absolutely, ask Vettel who was clearly faster than Ricciardo but he couldnt overtake him.

If he was so fast he would have just passed Ric!

You saw how "easy" it was for Hamilton to pass Gutierez, even when a second a lap faster, while managing tyres and engine, under blue flags... You don't "Just pass" someone at the Hungaroring.

Absolutely, ask Vettel who was clearly faster than Ricciardo but he couldnt overtake him.

- Not a good example
- You can try if you're quick, he couldn't. That was not arrogant but delusional and cheap marketing - Red Bull's trademark. During GP when you're slow you can always pretend. Same people that wrote brake testing after Monaco are now describing this driving mess as a "fair fight"

. Two sudden changes and slowing down into the tightest line only to block (brake testing!!!). He panicked that's what happened.

That's another element missing from this pseudo sport. Drivers. teams, FIA co creating clear racing rules based on every race examples. You have weasels and cheap politicians instead. They only care if it happens to them, this time Button. Nothing to say when Perez was ending up in the wall, outraged now. Back-patting with Ecclestone and Whiting when it suits them.
Top

I find it a bit annoying how people continue to bash Verstappen.

Perhaps some of his defensive moves were on the edge.. but people like to see that, someone who is actually defending his position instead of just letting them pass.

Verstappen is one of the reason's why people are turning their television back on..

George-Jung wrote:I find it a bit annoying how people continue to bash Verstappen.

Perhaps some of his defensive moves were on the edge.. but people like to see that, someone who is actually defending his position instead of just letting them pass.

Verstappen is one of the reason's why people are turning there television back on..

Let's embrace such a driver.. he will only get better and better.

Its not to bash a driver because his moves were on the edge, its because they were punishable according to the rules.

Its another subjet to discuss if this rules are good or stupid(some of the are IMO).
Top

I think a lot of us are getting hung up with the rules of engagement as opposed to the outcomes.

At worst, Verstappen's moves were borderline, and extremely subtle. A committee wouldn't be able to unanimously decide one way or the other, so I'm not going to suggest a penalty was the appropriate response.

However, I don't think this is clever driving on Verstappen's part. Not in the sense that it is overtly stupid, but because I believe the potential outcomes of defending in this way are expectationally worse than 'normal' defensive driving.

I.e. if Verstappen were to do this repeatedly, I'd expect several instances of collisions, racing incidents or otherwise, that result in his average outcome being worse than 6th place. Defending 5th in this manner for 2 extra points could easily expose him to a 10 point loss.

It's obviously his style, and his results currently reinforce his opinions, but somewhere down the line he's going to be leading a race, there will be a collision, and he will honestly believe he has nothing to do with it.

Raikkonen, on the other hand, seems to need an invitation to pass someone. I'm being facetious, but I think the general idea applies. I honestly thought Raikkonen had the capacity to finish 3rd, subject to passing Verstappen, as they were only 7-10 seconds adrift of Vettel when their battle commenced.

Its a huge weakness, considering how fast he can be under race conditions, because he often qualifies a couple of positions lower than he should. Were he able to clear people more readily, his career might reflect slightly differently.
Top
780 posts