A place to discuss the characteristics of the cars in Formula One, both current as well as historical. Laptimes, driver worshipping and team chatter does not belong here.
1145 posts

Great example of how NOT to paint an F1 car. Other than that it looks fantastic! Interesting FW and RW and I can't wait to see the diffuser!!
Mclaren fan since I was 8
Top

Everything back from the nose seems much less developed than other cars we've seen so far. The bargeboards seem fairly simplistic, the flow conditions around the sidepod, mirror stalks, floor etc. It all just looks very basic...
Top 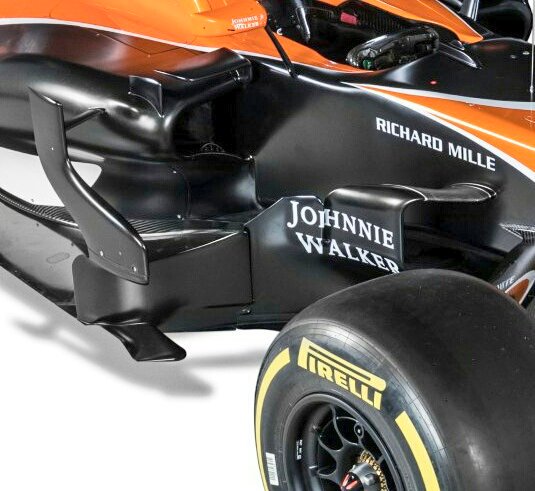 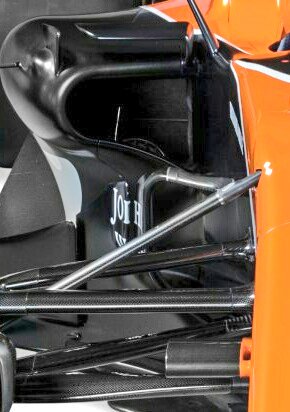 The MCL32 launch spec seems very aero-boring, conservative, non-radical and very "meh". I hope that the "clever things" Eric mentioned are on the diffuser and power unit.

Visually is sober. But we all remember the Brawn GP 2009: visually boring car but with a huge surprise underneath.
Last edited by namao on Fri Feb 24, 2017 1:22 pm, edited 1 time in total.
Top

Trying to compare sidepods between top cars of the engine suppliers, it looks the bulkiest to me, but smallest ventilation holes too.
Top

Diesel wrote:Everything back from the nose seems much less developed than other cars we've seen so far. The bargeboards seem fairly simplistic, the flow conditions around the sidepod, mirror stalks, floor etc. It all just looks very basic...

Remember this one? Simple and the fastest. The trick was where we couldn't see

Wow, that rear wing! A lot of development has been going into that. Yet, the actual wing is completely straight, as is Ferrari's. All others have curved wings, so I expect some other iteracies there as well during testing.

Apart from the rear wing, the sidepods and engine cover stand out for me in the sence that the sidepods themselves are very small, but also the whole engine cover is very narrow from sidepod to rear axle. Look at the amount of space here: I think it might be just as skinny as the Mercedes.

I agree that the front wing is not much more than a widened version of last year's front wing, but the pylons are interesting.

Besides these aspects, all seems very basic. The floor in my apartment has more development gone into it than this one. I also think that this is just a very basic concept of their bargeboards and doubt if we will ever see them test with them, let alone race with them.

All in all, we have seen the basic concept of the new car and it gives hope for the nearby future. I for one am really looking forward to all the aero development we'll see in testing. One thing's for sure: although Ron is gone, some of the secrecy around the McLaren is still there! And I like it!

Pany wrote:Wrong. If you are in deep --- and you know in 2017 u can not win or get podiums, thats the right moment to take risks and develop any new concepts. This way you better invest for the future. There is nothing to loose since 4°, 5° or 6° position doesnt change anything in Mclaren. The front part and the rear end of the car look good and well modified. The sidepods and centerpart remains pretty the same.
The real problem is Boulier and Alonso faces were not happy at all!!! this means the Honda engine inside does not deliver what promised? could be the end of Honda as engine supplier? thats the big question

GoranF1 wrote:What do you guys think about The Bargeboards area? Does it look undeveloped compared to others to you?

Check it in the top view, there are several elements that you can't see from the side. In the top view they almost look transparent (stupid lighting)

WTF? How is that a response to what we said? Plus, that's all speculation. The engine has zero km, you can say such things being seriously.
Top

Could it be a way to feed more air via the undercut to the back?
Top

Diesel wrote:Everything back from the nose seems much less developed than other cars we've seen so far. The bargeboards seem fairly simplistic, the flow conditions around the sidepod, mirror stalks, floor etc. It all just looks very basic...

Remember this one? Simple and the fastest. The trick was where we couldn't see http://mmedia.20m.es/especiales/formula ... rawngp.jpg

Most of the cars looked basic at the start of 2009. Brawn actually had one of the most complex front wings at the time.

Thunders wrote:That's the "RW Endplates of Justice" taken to the next level.

Last years testing obviously bore some fruit there, despite the naysayers.
Top

Whilst I'll expect much of it to be changed in testing, as the main surfaces are very simple - those saying the bargeboard area is simplistic aren't looking hard enough, they've got a tunnel built there with floor strakes in it ffs, much like the outside of a front wing...that looks like quite a powerful tool to control airflow under the floor and undercut.
Last edited by PhillipM on Fri Feb 24, 2017 1:56 pm, edited 1 time in total.
Top
1145 posts