Should be a good year!

Agreed on the good year part but I think Merc Ferrari will be close Red Bull a bit of a gap then a bigger gap to the midfields and they will all be super close to each other. Red Bull will then catch up by mid season. That's my prediction. I am really excited to see Honda doing well and hope they keep on doing well. Always had a soft spot for that company.

That could very well be how it works out. I think that mid-field is going to be totally bunched up this year and that could make for some absolutely fantastic racing.

The Haas, ALFA, and STR, are all said to be strong cars this year.

Sounds like McLaren will be near the bottom of that group of cars, with Williams likely the slowest cars on track all season long.

Who in the world would have thought the day would come when we would say that about McLaren and Williams!
Top

Watching the onboards, the Williams looks a handful! Another painful season for me I suspect...

Both Russel(l?) and Kubica were fighting the car during the middle of corner entry, with lots of front end nervousness after the initial turn in, particularly in the mid speed corners (of which there are A LOT in Melbourne).

Kubica also seemed to have some snap oversteer on the exit of slow corners. As he put the power down out of turns 3 and 15/16 in particular there were some heavy, rapid corrections at the back end looked like it was trying to break away.

I think that they'll be 3 seconds of the pole time.

In comparison, Ricciardo's onboards in the Renault looked really smooth, almost as placid as the Red Bull and probably as even/neutral as the Merc and Ferrari. If there's anything more to come out of that Renault engine, and the car remains neutral up to the limit of grip, I think that the Renault could really surprise some people come qualifying.
Top

The reason for changing Verstappen's chassis
https://twitter.com/andrewbensonf1/stat ... 1199602688
"A fool thinks himself to be wise, but a wise man knows himself to be a fool."~William Shakespeare
Top

I guess now the ONLY reasonable goal for this Russell kid is to be at least faster than Kubica. ATM everyone knows you can't do anything in a Williams car, so I doubt anyone would blame Russell for not achiving anything in 2019, but getting beaten by a 'one-handed" driver is not gonna make your career look good.
Last edited by yelistener on Sat Mar 16, 2019 3:46 am, edited 1 time in total.
Top

Nice 10 episodes of F1 last season recap on NETFLiX plenty of detail, highly recommended to watch over this weekend .
Top

midfield looks tight. top not so much.
Finishing races is important, but racing is more important.
Top

These cars are fast as hell. Haas looking quick as well.
Top

It looks like Bottas is struggling with the pressure here.
Top

The Stewards surely have to look at tyres pressures again. When every team is having to drive that slowly on cool down laps then it’s close to dangerous.
Top 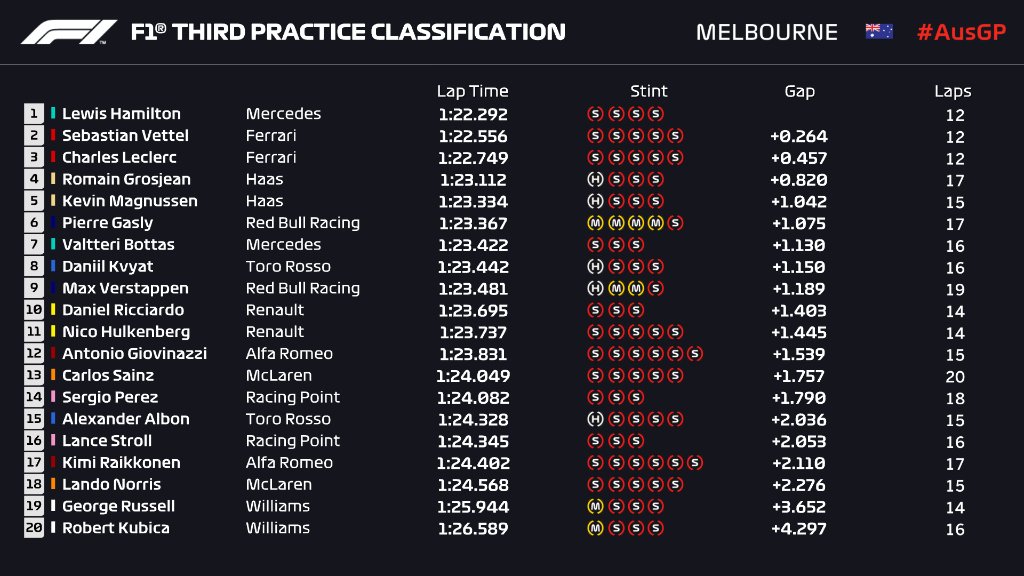 He looks to be in trouble already, too many mistakes.
Kubica is another one making rookie errors, he actually hit the pit wall.
Top

The Haas are looking really good... Way better than expected and Kvyat proving a point? In front of Verstappen... Qualifying will be interesting!

If Haas or Toro Rosso get withing 2-4 tenths of Max, you have to say that their cars are at least equal to the RedBull lol
GoLandoGo
Lewis v2.0
King George has arrived.

It was a chaotic session, not many drivers got a clean run on their fast laps . probably one of the worst sessions.
Top
922 posts