SmallSoldier wrote: ↑
Tue Jul 27, 2021 7:53 pm
Good interview to James Key in regards to the 2022 cars… McLaren’s approach, the impact of having less CFD and Windtunnel time, as well as how now they are up to par with their CFD tools to face the new regulations

Thanks.. enjoyed that
Top

Since we still have a couple of days before we can discuss Hungary, I thought it might be a good idea to take a quick look at Lando’s and Daniel’s qualifying performance and differences at Silverstone… This was the closest qualifying session between both drivers, with virtually the exact same lap time in Q3 and separated by just 0.002 seconds!

The graph below is representative of their best laps in Q3 for both drivers: 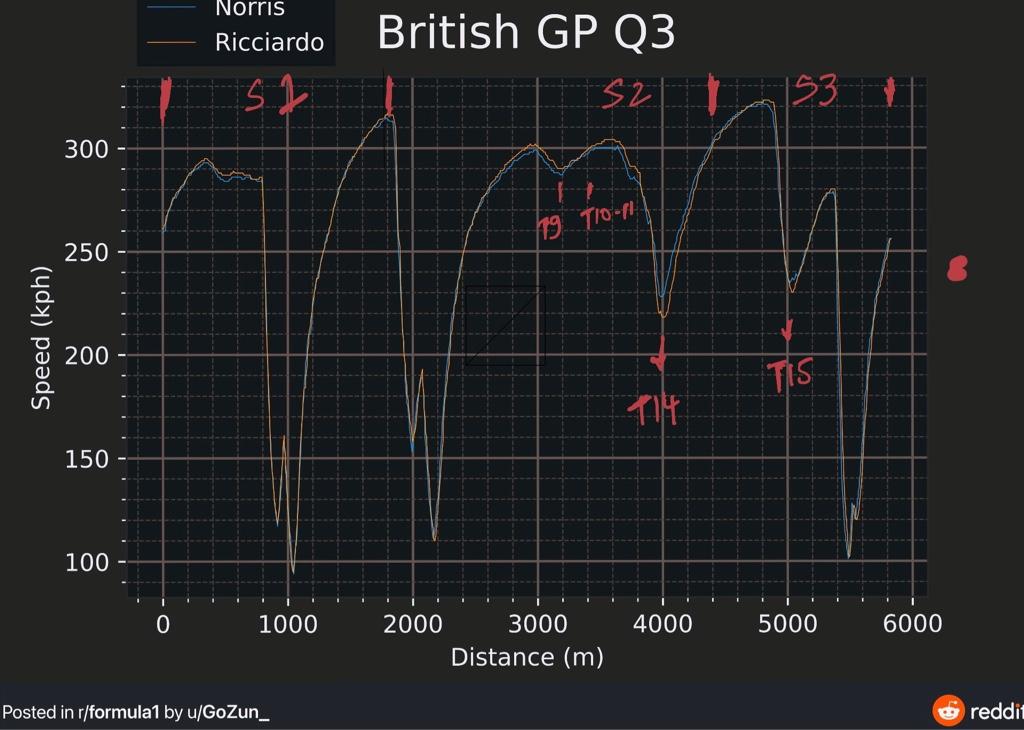 S1 is virtual tie for both drivers, Ricciardo with a 27.682 and Norris with a 27.677 only 0.005 faster… Based on the graph, I would have expected Daniel to be slightly ahead since he carries a bit more speed into T3 and T4… But the difference between is negligent.

S2 is again a sector with very similar performance, Daniel’s time was a 35.354, while Lando’s time was 35.305… In S2 Lando gains another half a tenth on Daniel, extending his lead on the lap to an impressive half a tenth of a second… It’s interesting that Lando is the slower of the 2 going in to the the Turn 9 to Turn 13 section of the track(from Copse to Beckets)… Nevertheless Lando not only covers the gap created in that section, but extends it with a great exit out of Beckets and carrying more speed through Chapel (T14)… When reviewing gear changes at that point, the biggest difference is that Daniel downshifts 8th to 7th gear, small pause and then from 7th to 6th gear, while Lando extends his run in 8th gear and downshifts without pause into 6th for the run into the Hangar Straight.. Daniel also lifts going into Beckets while Lando doesn’t.

S3 is where Daniel makes a comeback and claws back most of the time lost… Daniel’s S3 time is 23.863, while Lando’s time is 23.915 but once again separated by less than a tenth (only 0.052 between them)… Interestingly, Daniel outbrakes Lando marginally going into Turn 15 (Stowe) and carries slight more speed from T15 to T16 and carries more speed into Vale with Club been dead even for both of them.

If Lando had a good qualifying session, this would show that at least at Silverstone and during Qualifying, Daniel was up to speed with the MCL35M and almost beat Lando after several races been considerably behind… The fact that in most braking sections Daniel was matching Lando and even carrying more speed into several turns have to be a big sign of relief for Ricciardo and the team. 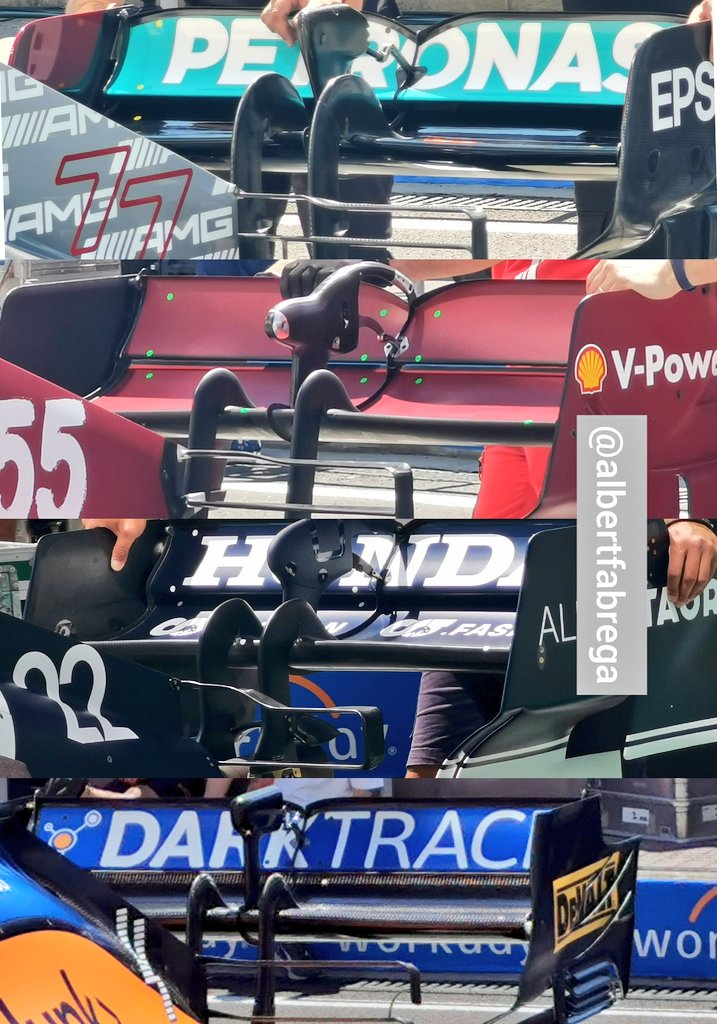 Given that this is not the latest update, I hope McLaren is not putting too much effort on this car rather than on the 22
Top

I am guessing this is like Mercs case where the R&D has been done its just a matter of Producing the parts and correlating them, also from the racefans article it very much sounds like it will be tweaks of existing upgrades already on the car ie maybe from trackside testing they find if we change this vanes angle by 2 degrees we can have this more positive effect etc.
Top


Minor upgrades / refinements for the remainder of the year...
Top

Awesome to hear!
The impossible often has a kind of integrity which the merely improbable lacks.
Top

Team Report for FP1 and FP2:

“Today wasn't too bad – obviously very hot which made things a bit tricky. It’s not just warm inside the car but the car itself, especially the tyres – the tarmac is hot and that can change a lot of things with the car and how it feels too. It doesn't make things too easy with the temperatures, but we’ll try to make sure we do a better job with that tomorrow and make improvements overnight. But I think we’re there or thereabouts, so we’ll see if we can gain a little bit for tomorrow."

“It was a pretty tricky day. The track conditions were really hot, so I think that made it more difficult. Even if you’re fastest today it’s probably not going to feel great because the cars and the tyres aren’t optimised for these sorts of conditions. It was hard to get a good feel from the car this morning, in terms of balance. But it was better this afternoon, even though we’ve still got work to do before tomorrow. We’ll try to chip away, make another step or two overnight and then be in a good place tomorrow.”

“We’ve had a busy and productive day of practice in Hungary. Conditions today were extreme: high ambient temperatures and I don’t think we were far from a record track temperature. We progressed through our programme well, without issues, and are happy with what we’ve learned today. We seem to be in the usual position in terms of competitiveness. The midfield is very tight, and a few milliseconds will make all the difference, so we have some work to do this evening and tomorrow to prepare for qualifying and ensure we have a good race on Sunday, starting from as high up on the grid as possible. We also know the weather is unsettled, so we’ll be preparing for multiple scenarios for the rest of the weekend.”
Top

they sound very non committal and no mention at all about the upgrades. That is either very good or very bad news

Expanded report from practice (from Formula1.com)… It would seem that they are more or less where they expected to be, which is fighting with Ferrari… Whether the Alpine’s and Alpha Tauri’s pace is real or if they just had their engines in a harder mode is still to be seeing… But, if the hot temperatures aren’t liked by the MCL35M, it will be a difficult weekend

Puzzling day- Ferrari nowhere in FP2 and I don’t know how to predict them any more!

We didn’t look particularly agile around here visually but we know we can come alive when we turn it up and take the fuel out on a Saturday, so let’s see.

Suspect FP3 will begin to sort out where people are roughly at having analysed everything overnight. Be interesting to see if Bottas can stay ahead and whether Perez can hook it up.
Top

Are we expecting same sort of weather, with high temperatures throughout the weekend?
Q: (Stefano Mancini – La Stampa) Kimi, will you help Vettel to win his championship this year?
Kimi Raikkonen: I can only drive one car, obviously.
@2018 Singapore Grand Prix drivers press conference.
Top
8092 posts