For ease of use, there is one thread per grand prix where you can discuss everything during that specific GP weekend. You can find these threads here.
2245 posts

PlatinumZealot wrote: ↑
Thu Jul 22, 2021 1:20 am
The inside man that is alongside going into the braking zone has always "owned" the corner as long as I have watched motor racing. So I was sorta shocked that Max would risk so much.

Nope. That's not how it works.

If those were the rules, then Hamilton was at fault for hitting Raikkonen at Silverstone 2018, using your exact rules.

Kimi clearly outbraked himself. In other words he was behind before the braking zone. It was a dive-bomb. He didn't own the corner.

Just_a_fan wrote: ↑
Thu Jul 22, 2021 8:48 am
Most shunts are racing incidents, to be fair. Most shunts are just one or two drivers misjudging something. Very few are deliberate attempts to cause an accident. That blame is apportioned and penalties given is more to do with making sure drivers don't decide to carry out deliberate actions that cause accidents / damage to other cars.

It’s very common for the fanbase of the driver who is primarily at fault for an accident to argue that it was a racing incident.

Would you have accepted it if a Rosberg fan tried to argue racing incident after Spa 2014?

“Racing incident” when your driver is predominantly at fault is like a guilty party trying to settle in court.


A divebomb up the inside might be considered a deliberate attempt to crash - it's saying the other driver make way or we crash. But a bit of wheel to wheel jockeying for position, as happened in the race and Sunday, is just a racing incident.

First of all, there is nothing wrong with divebombs when they are executed correctly; and they certainly do not imply a deliberate crashing attempt. A divebomb, if executed correctly, can create a beautiful overtake (see Monza 2007).


The stewards gave a weak penalty purely to be seen to be doing something and prevent ire being directed their way.

A 10 second penalty is not actually considered a weak penalty. Drive through are becoming increasingly rare. Most incidents these days are either 5 or 10 seconds, so the fact that it was 10 seconds instead of 5 alone is a statement.

Secondly, your claim that the stewards only gave a penalty to Hamilton in order to avoid backlash is not supported by any evidence. The stewards analyzed the incident and gave a clear explanation as to why Hamilton was deemed predominantly at fault.

A statement from the FIA read: “The Stewards reviewed video and telemetry evidence. Cars 33 [Verstappen] and 44 [Hamilton] entered turn 9 with Car 33 in the lead and Car 44 slightly behind and on the inside.

“Car 44 was on a line that did not reach the apex of the corner, with room available to the inside. When Car 33 turned into the corner, Car 44 did not avoid contact and the left front of Car 44 contacted the right rear of Car 33. Car 44 is judged predominantly at fault.”

If your beleive in the Stewards so much... what do you think was Verstappen's portion of the blame? Let us see if you are unbiased....

When the letter of the rules doesn't suit them they try to make stuff up. This convo will not fade out before Zandvoort? what says Hungary. A good thing that will emerge is that knowledge and awareness of the guidelines on overtaking will increase to the wider fanbase.
🖐️✌️☝️👀👌

You clearly didn't understand what the writer has written there. Do you?
Hakuna Matata!
Top

presumably ....
the 51g was detected on the car's structure not on the driver
the response of the driver's various body parts is modeled in determining the impact regulations

Yes, the 51g was what the on-car sensor recorded. The driver won't have been subjected to that as various devices in the car are intended to prevent him from being subjected to such loads. Certainly the head restraints along the side of the cockpit opening will limit the acceleration of the head in side impacts such as this one - that's why they're there.

I can see that he will have been winded by the impact - heck, listen to his radio and you can hear that he was winded etc. It's not a pleasant sound.

Folks are not just armchair experts of F1, but are also experts in G-force impacts. In an effort to bring legitimacy to a foul argument, a serious accident impact is being talked down with absolute disdain. That's a new low.

Neither myself nor the post I quoted were talking down the impact, nor treating it with disdain. The last paragraph of my post that you quoted shows there is no disdain.

We were attempting to discuss the situation behind the headline acceleration figure.

Quoting "51g" is meaningless without a time period. 51g for a fraction of a second is much less an issue than 51g applied for a second or a minute. Likewise, the quoted figure is that recorded by the sensor on the car. The driver will have been subjected to a different acceleration, with different parts of him potentially seeing high accelerations - the legs, for example, hitting the inside of the tub - and some parts might have seen lower accelerations, for example his head because it was within an absorbent environment (helmet) which itself would have interacted with the energy absorbing cockpit side pads.

We don't know what any of those individual accelerations are - no one does because the drivers don't have accelerometers on every part of their body. So we can only discuss in the general sense.

Perhaps you could put away the straw men and discuss the technicalities. Your links were informative, your insults are not.
Turbo says "Dumpster sounds so much more classy. It's the diamond of the cesspools." oh, and "The Dutch fans are drunk. Maybe"
Top

51Gs is quite an impact, but not uncommon in motor-racing. In fact, Verstappen could step out of the car on his own power and, as the circuit doctor announced to the teams "had no initial signs of injuries".
Top

I just walked barefoot on my concrete balcony. The bottom of my feet experienced forces in the 100’s of G’s.
Top

The use of "g" is an attempt to make it understandable. We intuitively know that "51g" is big, where most wouldn't know what 500m/s^2 represents.

John Stapp endured 46.2g for 1.4s in a rocket sled deceleration test. That's potentially a much more destructive acceleration than the 51g on Sunday. That's why Stapp received injuries including detached retina.
Turbo says "Dumpster sounds so much more classy. It's the diamond of the cesspools." oh, and "The Dutch fans are drunk. Maybe"
Top 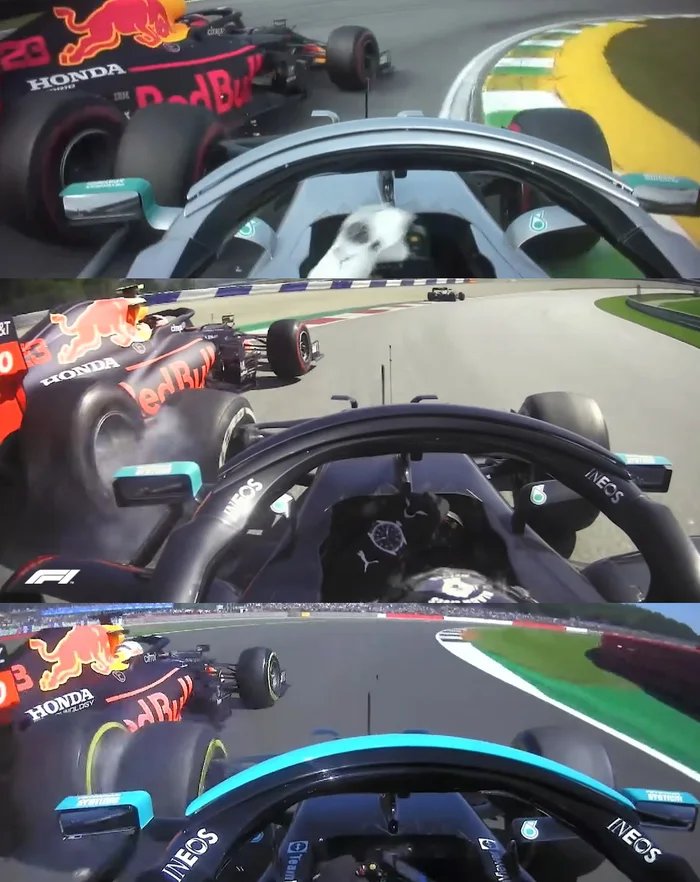 Wasn't it necessary to quote an elementary article to someone writing pretty much lame stuff? You didn't pay attention to the other part in my original post. Selective outrage must be controlled, no matter the level of urge. I take it that you conclude that a driver walking off a 51g impact, is perfectly fine. That's why it is even more important to read the other part of that post that outlines the longer term impact of such a crash.
Hakuna Matata!
Top

Thank god you are doing well and here.