A place to discuss the characteristics of the cars in Formula One, both current as well as historical. Laptimes, driver worshipping and team chatter does not belong here.
76 posts

I'm sure Ferrari's glad that they're not supplying RBR anymore

so they'll have the same problems with the STR
Top

The German magazine, however, says that Coulthard and Australian Webber, 30, are reporting a general lack of aerodynamic grip, in stark contrast with the data findings of the newly-commissioned wind tunnel in Bedford (UK).


yeah, in my opinion it sounds like last years McLaren....maybe Newey brought all the bad and very little of the good.

have you taken a look at the rear end of the McLaren/RB3 vs the rear of the Renault? it's a night and day difference in aerodynamics. Renault have a fairing behind the driveshaft and the McLaren have nothing there.
I love to love Senna.
Top

any comparison photos of it ginsu?
" If you want to win, get a Finn" - Hakkinen
Top

I really tried to find a good pic of the RB3 rear end online but I couldn't. I only have the pics on my hard drive. Notice the fairing behind the driveshafts very nice. Macca/RB3 doesn't have them. 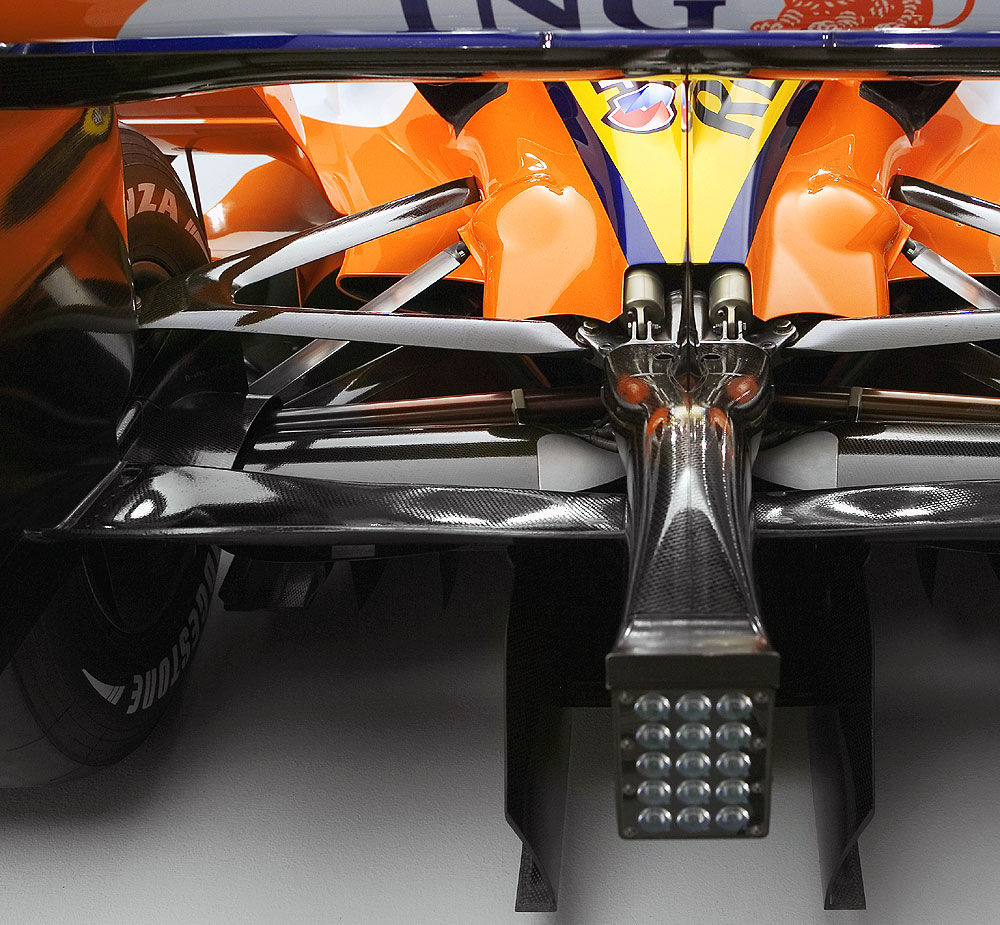 m3_lover wrote:David Coulthard has refused to make a damning appraisal of Red Bull's new car for 2007 despite failing to shine at the wheel so far.

Also in the hands of the Scot's new teammate Mark Webber, the Adrian Newey-penned machine had an unreliable and slow start to its on-track life, prompting recollections of Coulthard's recent assertion that heads should roll if the RB3 bombs.

When asked about the car, Coulthard is quoted as saying by Auto Motor und Sport: "I do not want to avoid the question, but you would not judge the effectiveness of a new plane if you had only flown it in the simulator and for a few metres down the runway."

The German magazine, however, says that Coulthard and Australian Webber, 30, are reporting a general lack of aerodynamic grip, in stark contrast with the data findings of the newly-commissioned wind tunnel in Bedford (UK).

Auto Motor und Sport adds that the car was up to four kilometres per hour slower at Valencia than engine supplier Renault's works team last week, and that the new high speed gearbox was not even used due to faults.

The RB3 is reportedly also failing to effectively use Bridgestone's control tyre.

"Even after long runs the rubber looks like new," the magazine wrote

Seems that they cannot generate enough heat on the bridgestone tyres. Th e MP4/20 had a similar problem at the start of the 2005 season and reworked their suspension i think. Seems like red bull are having the same problem.
Top

I'm not sure if that's a fairing behind the driveshaft on the Renault. It looks to me to be the trailing arm of the lower wishbone. Nice detail though, as the Merc obviously does not have it inline with its driveshaft.
Top

No, it is a fairing behind the driveshaft you can see how they attach it with those two clips (which must be coated in teflon). Actually this type of 'wing' with a leading edge that is rotating generates appreciable downforce. The situation is very similar to the golf ball effect. I wonder if anybody can develop dimpled driveshafts? I think that would be even better.

This quote is from tests with an airplane wing, so the observations are reversed.


Previous studies involving wind tunnel testing and computational experiments have indicated the huge potential of a rotating cylinder placed on the leading edge of a aerofoil as a high-lift device. The rotating surface (cylinder) energizes the airflow on the upper surface of the aerofoil, which has the potential to delay the separation of the boundary layer and thus the onset of stall as well as producing a larger pressure gradient enhancing the lift of the aircraft. As a result of these effects, the stall angle and maximum lift coefficient have been shown to significantly increase during wind tunnel testing.

Ginsu, very interesting find! To ease my own mind, do you have a pic of the Renault's back end from a lower angle?

Didn't Mclaren have a similar problem at the start of the 2005 season and they sorted it out by revising their suspension geometry?
Top

here you go, BTW only the R27 has such great pictures of the diffuser area, maybe they are proud to show it off! 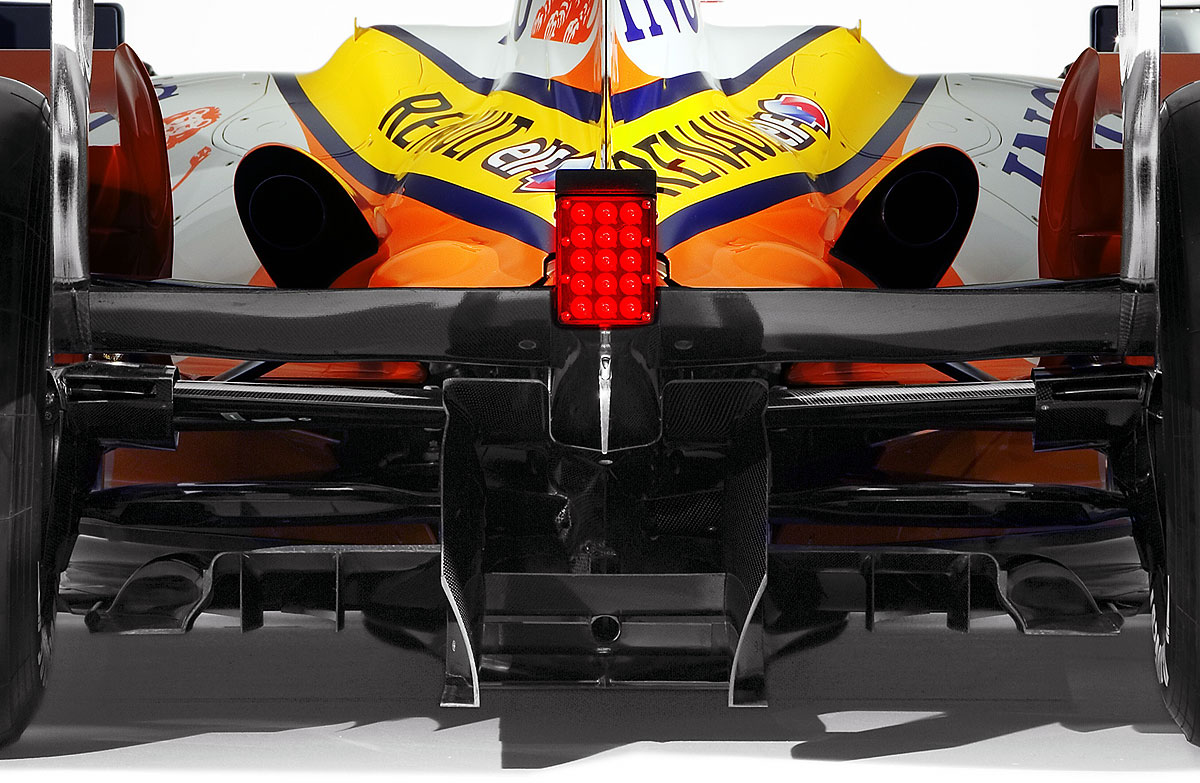 Damn! I'll be, you're right, Ginsu. I really thought that was the lower rearmost wishbone.

Thanks for the work and the clarification.
Top

I haven't been able to find a good picture online yet, but it looks like the RB3 does have a fairing covering the entire driveshaft. It should be better for drag, but potentially does not develop as much downforce as the R27, still it would be better than leaving it completely exposed like the MP4-22.
I love to love Senna.
Top

I should point out that in the Renault launch pics, the car has last years rear impact structure, diffuser, brake ducts and wings.

Right now McLaren have a far more radical diffuser than Renault, In fact Sam Michael suggested to me that the Mac diffuser could be looked at unfavourably by Charlie Whiting if it apears in the same guise in Melbourne.
Top
76 posts