And I don't believe the Spanish TV either. (Neither the Dutch TV, on Dutch TV was mentioned after the race that the team said to Max a lap for the finish to keep his place)
Top

One thing is sensationalism, and a different thing is lying to the audience. When the radio showed the message to Max the spanish reporter in the pitlane went to STR to ask, and that´s what they said.

Maybe it was not 15 laps and it was 10, I don´t think STR people counted the laps, but that´s what they said so the important point is Max was asked to let Carlos pass for many laps before the public comunication and he refused to do so
Top

Given that STR have multiple stories for the one event it doesn't make a great deal of sense to attachment any level of importance to any of them.
Top

Cold Fussion wrote:This is the reality of having a 17 year old male driving for you, even as one as mature as max appears to be. I question the 15 laps thing as well, they weren't behind Perez for 15 laps and it wasn't clear that Max's attack on Perez was tapering off until a couple laps before the end.

But taking into account the team´s attitude I think that Max is seeing the he can do anything he wants to do and it wont be any penalti/reprimand from the team.

Its the problem of being the "new Senna" he can disobey team´s orders and nothing happens.


Apart from that he did a great job in Japan. Its a pity Sainz´s mistake because he was driving a great race and he should have ended in front of Max and Pastor.
Top

You don't know what they talk about talk about in the team meetings which is what actually matters. The teams are not in the business of --- talking their drivers in public, they sell a different series of events every time they get asked about it, I don't really see why we should take anything they say on the matter seriously.

Edit: Why is there a swear filter?
Top

Quite eventful race for the drivers. Verstappen´s race was compromised by the initial incident and he could not find a good pace to take some points. It seems that the car could have been sligthly damaged.

Sainz´s race was really impressive after his big accident in FP3, too bad that they brakes didnt last enough.
Top

Cold Fussion wrote:You don't know what they talk about talk about in the team meetings which is what actually matters. The teams are not in the business of --- talking their drivers in public, they sell a different series of events every time they get asked about it, I don't really see why we should take anything they say on the matter seriously.

Edit: Why is there a swear filter?

There's always been a swear filter, hence the @ss and sh!t that you occasionally see in posts.
“To be able to actually make something is awfully nice”
Bruce McLaren on building his first McLaren racecars, 1970


Red Bull and Toro Rosso will be able to make use of Renault's upgraded power unit from this weekend's 2015 Formula 1 United States Grand Prix, the French manufacturer has confirmed.

Whether either team elects to do so remains to be seen however, given that they would also be forced to take grid penalties as a result.

"We will have our new specification of power unit available to use in Austin," Renault's director of operations Remi Taffin said.

"The principal changes involve the internals of the ICE (internal combustion engine) to give improved power and efficiency. We know that introducing the new PU will incur a grid penalty so the decision to use will be made in full consultation with the teams.

"At this point of the season obviously points are crucial so if circumstances allow then we will use on track."

Renault, the last of the four power unit suppliers to dip into their allocation of engine development tokens, said they are confident about Red Bull and Toro Rosso's potential this weekend regardless of whether either team takes on the revised unit.

"Whatever spec we do use, we are looking forward to Austin," Taffin added. "Our reliability has been good in the last three races and performance more in line with our expectations; both our teams just need a clean weekend to show the improved potential of both packages.

"There's very little not to love about Austin. The setting is impressive, the welcome is warm and the track is one of the best we visit all year. There are some very impressive corners and flowing complexes that challenge drivers, engineers and the technology we use."

Negotiations as to which power units both Red Bull and Toro Rosso will use in 2016 continue.

Toro Rosso has decided not to use the updated PU, it seems that they will use it in the next race.
Top

From what they said I don't think they'll use it at all.
Top

mikeerfol wrote:From what they said I don't think they'll use it at all.


This was my impression for both Red Bull and Toro Rosso.

Wouldn't matter in light of the rules if there's an engine failure or not. You go over the allowed number of engines per season, you take a grid-penalty irregardless what the cause of the engine failure may have been. From the CotA drivers press conference, according to Ricciardo, it seems the expected benefit of the newer engine is not large enough to make the grid penalty they would need to incur worth it. It's a tough one, for either TorroRosso and RedBull.

IMO - both teams should use the new engine on at least one car in one of the 4 next races. This would give a better insight to where the development stands and they can compare them like-with-like. It would also help in the question which engine may be used next season. It would also greatly benefit Renault too. Imagine that; bringing an update, but no one wants to use it.
Not for nothing, Rosberg's Championship is the only thing that lends credibility to Hamilton's recent success. Otherwise, he'd just be the guy who's had the best car. — bhall II
#Team44 supporter
Top

Oh no, I wasn't suggesting in terms of evading the penalty, more that Renault want to test this engine and Red Bull aren't playing ball. If Renault were to bring only the new engine and then RB and TR were to have engine failures it would be rather convenient for Renault....
http://www.swtriathlete.com
Top

New gearboxes for both cars, no penalties: 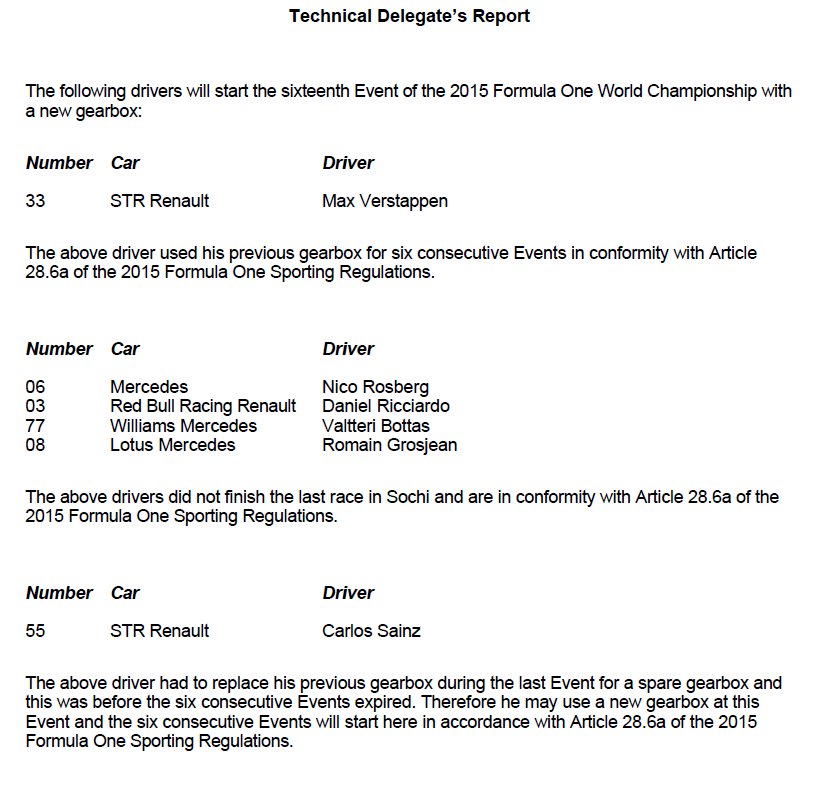 According to some websites Toro Rosso will use Ferrari power units next season. I think this is great for the team.