This forum contains threads to discuss teams themselves. Anything not technical about the cars, including restructuring, performances etc belongs here.
241 posts

Moanlower wrote:After Williams yesterday, Haas had a 'filmday' today which lasted 1 lap due to an oil leak.

I don't think they will struggle as most newcomers in the past though since it's basically a 2015 Ferrari in disguise, although they hate to admit. I believe they build the chassis from zero which is probably the main difference from the SF15-T, and that shouldn't give too much problems running wise. I'm very curious laptime wise.

Wait...is it a completely new chassis or is it a 2015 ferrari in disguise as you say? It cant be both...

With chassis I mean the monocoque without suspension. I'm not sure though, hence the 'I believe' in my previous post. I guess tomorrow we'll have a chance to compare. What's most important is that they shouldn't have the troubles Mclaren Honda had with their PU last year.
Losers focus on winners, winners focus on winning.
Top

Why did they put HRT livery on a Ferrari?
Top 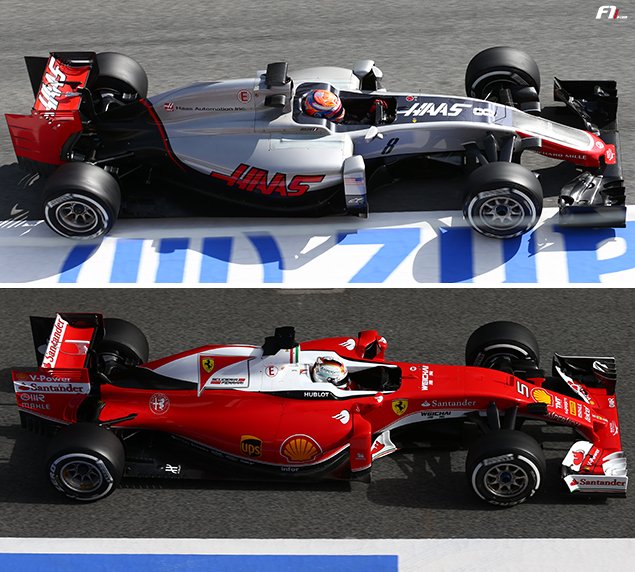 Is this how it goes here nowadays? Rating negative anonymously for stating the truth? Some pathetic cowards here for sure. Must be americans I guess, but who cares. Outta here!
Losers focus on winners, winners focus on winning.
Top

Moanlower wrote:Is this how it goes here nowadays? Rating negative anonymously for stating the truth? Some pathetic cowards here for sure. Must be americans I guess, but who cares. Outta here!

I didn't give you a negative rating on the first post even though it's inaccurate , but the drivel I've quoted here does get one.
“To be able to actually make something is awfully nice”
Bruce McLaren on building his first McLaren racecars, 1970

I guess I'm re-asking this question now that the car is on track. Media reports always say the car is "as much Ferrari as allowed", but which components are from Ferrari and which are not? The chassis is Dallara, the engine electronics I believe are McLaren (as required). The drivetrain is Ferrari, plus.....??

Everything about that car apart from FIA standardized parts is Ferrari to some extent or other.

Chassis is built by Dallara, but designed with "loaned" Ferrari engineers, the Ferrari windtunnel and heavily based on the SF15-T. Same for cooling system. Engine, gearbox and gearbox are Ferrari components, along with suspension. Independently made parts like brakes will be from same source Ferrari gets them. Wings are 99% copies of Ferrari, wheels are also 99% copy and probably the only part of the car actually made by Haas (everything else is Dallara/Ferrari or outright Ferrari).
Top

I'm curious what the Haas plan is going to be going forward. I thought I read (and I cannot find it now), that Dallara would build everything initially then Haas (in Carolina) would take everything on. Is this still the plan? Or is Haas going to use his team to build the 2017 car? Or just stay this course as it seemed to work out OK for them.
Top

My guess is this for the car:

Id guess the car has about 60% Ferrari in its DNA, however it will have another 20-25% 'designed by Ferrari' in its DNA as well as there was a helpful heap Ferrari engineers helping Haas in the past 18 months. The car has many Ferrari quews in its design from the past two Ferraris, it has in the engine area the same guys who have helped Manor in the past two years I am told. The team also has many ex-Ferrari guys in there who were surplus to requirements at Maranello and also are English and took the return home as Ferrari allowed them to shift without the usual gardening leave of 6 months.

The team is about 60% a Ferrari B-Team at present, but as time goes on and the team develops more of its own tools and resource it will become a more self sufficient team, but that will come only once the FOM arrangement is in place as Haas is only going to budget £80m for the team each year, its on a tight budget. However if there is more sponsorship for the team as time goes on I can only see this budget creeping up. I can eventually see this team become a team of Force India level, if it keeps two capable B grade drivers in its seats like Force India at present or a up and coming A grade hot shoe and a C grade driver who can push the car once in a while to make it look respectable.

Don't get me wrong, I'm against the way they have gone racing, as Virgin, Lotus Racing and Hispania (nee Campos) had a much tougher ask in 2010-2015 with the two latter crashing out. But if its a new business model and way to go racing on a 'cheaper' format, I can only see Renault and McLaren/Honda doing the same in the future with their 'B-teams' and while their at it, Red Bull will do some of the same at Toro Rosso. Heck they have done much of that in the past 18 months as well but in a infrastructure level at Faenza with a new STR factory and them taking a lot of the old Red Bull Technology like the old Simulator a helpful two or three lorry-loads of factory equipment as RBR now have a new Simulator and a load of new factory gear as well. I'm not sure what a few of the other teams will think, like Williams, but they now have a customer in F1 again in Manor who they could exploit their links there.

If there's rules that stop the likes of Haas going to Ferrari for certain parts that's fine, but ill take everything else a Manufacturer can legally give me till there is a rule to stop me. I'm happy with this half way house to stop 'customer cars' or 'year old designs' circa 2006-2009.
Twitter: @ESPImperium
BLOG: http://espimperium.wordpress.com
Top

Confirmation that not only the suspension is all Ferrari, even the bodywork and wings with minor differences.

Dude youre so right! They even copied the whole 4 wheel approach. They cant even come up with an original number of wheels.

On a serious note, HAAS has taken an extremely semsible approach. The entire team has been 100% transparent with the approach. They know they can't outdesign existing teams with just NASCAR experience. They are not going to reinvent the wheel and they admit that they first have to learn the game before even thinking about finishing near the top. Even in industry, companies try to hire experienced employees from competitors if they want to move into a market segment. This is nothing new.

The mods have specifically mentioned that this isnt a thread to compare the similarity of cars. All F1 cars share a majority of the critical design aspects. People like you are only going to look for similarities because you want to discredit. You are not going to set your bias aside to make an accurate technical assessment.

Do you want a team to join knowing they will be 4 seconds or more off pace? Do you just want a 2 class field? Maybe you want less teams racing? Or do you really just want to talk trash.
Top

Not sure the Haas F1 team shares anything with the Stewart Haas Nascar team. I believe the F1 team are new hires. The 2 teams share a common owner but that is about it.
Top

ESPImperium wrote:My guess is this for the car:

On the pictures the rims were marked as Haas, so probably their own...
Art without engineering is dreaming. Engineering without art is calculating. Steven K. Roberts
Top

I like Hass' approach. It is very efficient business model. Most establish teams have factories that produce parts. The more parts you produce the more cost effective your business is.
So i think both ferrari and Hass benefit from this arangment. To me it's a good thing and there is no shame in buying ferrari parts just as there is no shame in buying a screw, a bolt or carbon fiber material from a supplier.
In fact i would encourage the teams with big factories to make generic parts and have a parts market where the smaller teams can shop around in and build their cars from.
Already we can see that the VF16 is on the pace and may actually give some midfield teams a run for their money. It gives off that nostalgic feel where a car can be built up in some guy's garage somewhere out of junk parts and hit the track and be competitive.
Grosjean's decision isnt looking too bad.
For Sure!!
Top

Not hating, it's a clever approach, and much better than having another hopeless backmarker simply making up the numbers. I'd be quite happy to see more customer teams on the grid if it improved the competitiveness of racing.

But no credit for the car goes to Haas. They have found a legal loophole to buy and run a Dallara built Ferrari F1 car, nothing more and nothing less.
Top
241 posts