This forum contains threads to discuss teams themselves. Anything not technical about the cars, including restructuring, performances etc belongs here.
395 posts 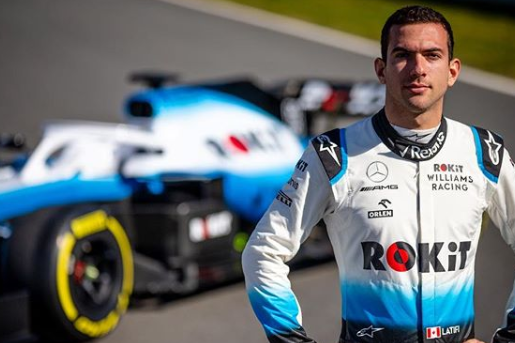 This thread is to discuss the 2020 Williams F1 TEAM
"Explain the ending to F1 in football terms"
"Hamilton was beating Verstappen 7-0, then the ref decided F%$& rules, next goal wins
while also sending off 4 Hamilton players to make it more interesting"
Top

A couple of new announcements, in the extension of the partnership with Sofina (inevitable, given Latifi's connection) https://www.williamsf1.com/racing/news/ ... on-in-2020

And Jamie Chadwick renewed as development driver with an increased sim role (which should knock on the head any lingering suspicions of a role for Roy Nissany) https://www.williamsf1.com/racing/news/ ... er-academy
Top

I'd love to know his sim times versus Jamie's
Top

Lavazza also jump on (Latifi) board...

The Lavazza thing is interesting. Not sure whether that's just an integral part of the deal with Latifi, or a case of Latifi's personal sponsors deciding separately to put some money into the team now their man is in F1.
Top

That's one way of looking at it. I'm not going to condemn the entire team on that basis just yet. Isn't their head of PR on maternity leave at the moment? Might just be something that slipped between the cracks. Everyone seems willing to jump on Williams for the smallest thing, when elsewhere you see things like Alfa getting a pass for waiting until 2020 to get a simulator. As I said before, the season hasn't started and the full list of drivers is incomplete.
Top

Another new sponsor announcement, no doubt associated with Latifi

This may explain why there was no money in my bank account this morning..

Good news for Williams, l'm looking forward to 2021
on a personal level, It's going to be hard to bitch about the service fees now
Top

This may explain why there was no money in my bank account this morning..

Good news for Williams, l'm looking forward to 2021
on a personal level, It's going to be hard to bitch about the service fees now

I have to say he's not wrong. I was surprised and shocked at the start of 2019, having not believed it would be possible for the team to go backwards from 2018. I thought then that it was a case of a car that should have been decent but had some fundamental flaws that stopped it being developed, and a few basic things changed would mean a big improvement the following year. The positive noises coming out of the team in the late summer suggested that things would get better, but I didn't notice that nobody was saying much that was hopeful after that. I understand the reasons given for why the FW42 was so slow relative to the field, and it was obvious that the technical dept was in chaos in the run up to 2019, and while I believe that things have improved on the inside, I don't know that for sure. It's true that cautiously optimistic statements have been coming out of the team in the last few months, and not the kind of 'expectation management' you'd expect if things were going to be terrible again. On the other hand, finding new sponsors is now critical for Williams and I'm not sure they'd be especially up front about it if they were expecting another season stranded at the back.

So only time will tell. Only just over a month to the first testing session...
Top

It clearly states it's about the new merchandise.

The 2020 contender will be the same as the 2019 one anyway just with some minor modifications.
"Explain the ending to F1 in football terms"
"Hamilton was beating Verstappen 7-0, then the ref decided F%$& rules, next goal wins
while also sending off 4 Hamilton players to make it more interesting"
Top

Roy Nissany confirmed as test driver for 2020. https://mobile.twitter.com/WilliamsRaci ... 2854615040
"Stupid people do stupid things. Smart people outsmart each other, then themselves."
- Serj Tankian
Top

This surprises me a little as I understood that you needed 25 superlicence points to take part in GP Free Practice sessions. Has this rule been lifted? Or does Nissany have more points than I thought he did? By my calculations he only has around 12
Top
395 posts