This forum contains threads to discuss teams themselves. Anything not technical about the cars, including restructuring, performances etc belongs here.
139 posts

Well, they've been going backwards for years, so i guess going sideways is better

Impressive performance throughout this weekend, points on merit might be a thing.
Top

Williams with both cars in Q2... That’s great to see! And very happy for Latifi, he seems to finally be getting to grips with his car!

Too bad about the contact between George and Valterri.

I don't really concider Bottas 'fully' moved to the right, but I do believe Bottas did not put as much effort in steering left as he did the laps before.
Likewise, Russell could have stayed more on the track, ignoring Bottas' direction, and hold out a bit more, or simply decide to bail and go for it the next lap.
As such, i'd concider Russell took an unneccesary risk and executed it wrong - so i'd hold him more responsible in the end.
That said, totally apart from who's at fault, the UNDENIABLE fact remains that not only was Russell able to get that Williams in a position during qually where it
'doesn't belong', it is a FACT he was running P10, and was challenging a car in P9.

The last time he made that position he was in the dominant Mercedes after a bunch of absolute landmines and grenades thrown at him.
Now, it was on full own capability.

That car in P9 however was Bottas, he could have BEATEN the Merc with the Williams,
and I am 100% sure he WOULD have eventually overtaken Bottas within 5 to 6 laps if he just had kept some more patience and pressured bottas more.

I actually think if he backed out from that move, he would have already put so much pressure on Bottas, that Bottas would have ruined his tires and lap times by defending,
and at the end of the lap gain even more that he would have overtaken Bottas far before he did during the crash and it would have crowned him to LEGEND.

You could argue he went from hero to zero in no-time.

That said, he did some Senna-esque moves "if you don't go for a gap that is there, you're no longer racing". So i still applaud his dedication and drive.
He has now learned a valuable lesson though: sometimes you also need to be more patient and tactical.

It's just a real bummer that he didn't actually make it. He would surely have made that P9 stick. Bottas was a total embarassment and it would have weakened his position irrepairably.
Instead, this collision actually saved Bottas. Had he finished P10 and Bottas P9 then Russell still would have been King and he'd be in a much stronger position and Bottas much weaker.

More so, overtaking Bottas was only possible due to DRS. Would he have overtaken Bottas, Bottas would be able to get that position back 'relatively easy' because George would be without DRS afterwards, so he'd actually lose that position to Valterri - or end up in a collision anyway.

Smartest would have been staying behind Bottas, and i think that's what Toto actually implied. Not that he wasn't faster, but it would be to no avail in the end anyway.

The biggest irony of it all is that since lewis went off, had George not went for that move and crashed, then both would have passed Lewis easily, and that means Bottas would end up P8 and George P9, and if no SC had happened, it would have been impossible for Lewis to get back to P2 like he did.

If i'm not mistaken, Bottas - like George i believe - also had to make a pitstop still. He would have been much better off going for a undercut or overcut. He could have finished P8 instead.
in front of Both Bottas and Lewis. OR, if eventually Lewis does come back through the field, Bottas 100% would move for Lewis, and then all he had to do was wait for Lewis to pull a move on him and then benefit from Lewis' DRS range to keep in front of Bottas.

Either way, Portimao was bonkers last year so who knows, Russell might get another chance.
And whilst Russell has grown from this incident,
Bottas is far past the point that he needs to 'grow' and more likely has had a firm slap on the wrist by toto too,
so i would think Russell to be in a mentally stronger state.

If russell gets a good grid spot in Q2, then i think he's going to be mighty again.

Williams is absolutely lucky to have Russell. He's leagues up from where the car belongs.

Well...Paddy Lowe breaks his silence. Seems none of the past William's woes were all the fault of Claire not selling the team sooner. Glad that has been cleared up.
Top

where's the source on that?


Speaking on the Beyond the Grid podcast, Lowe said that he felt "pleased" when he heard the team had been sold and that the Williams family would be leaving.

"That's what they've needed to do for a long time, and to be honest, should have done it earlier, for all sorts of reasons which are not to do with any individuals,"

I might have a listen to the podcast later
Top 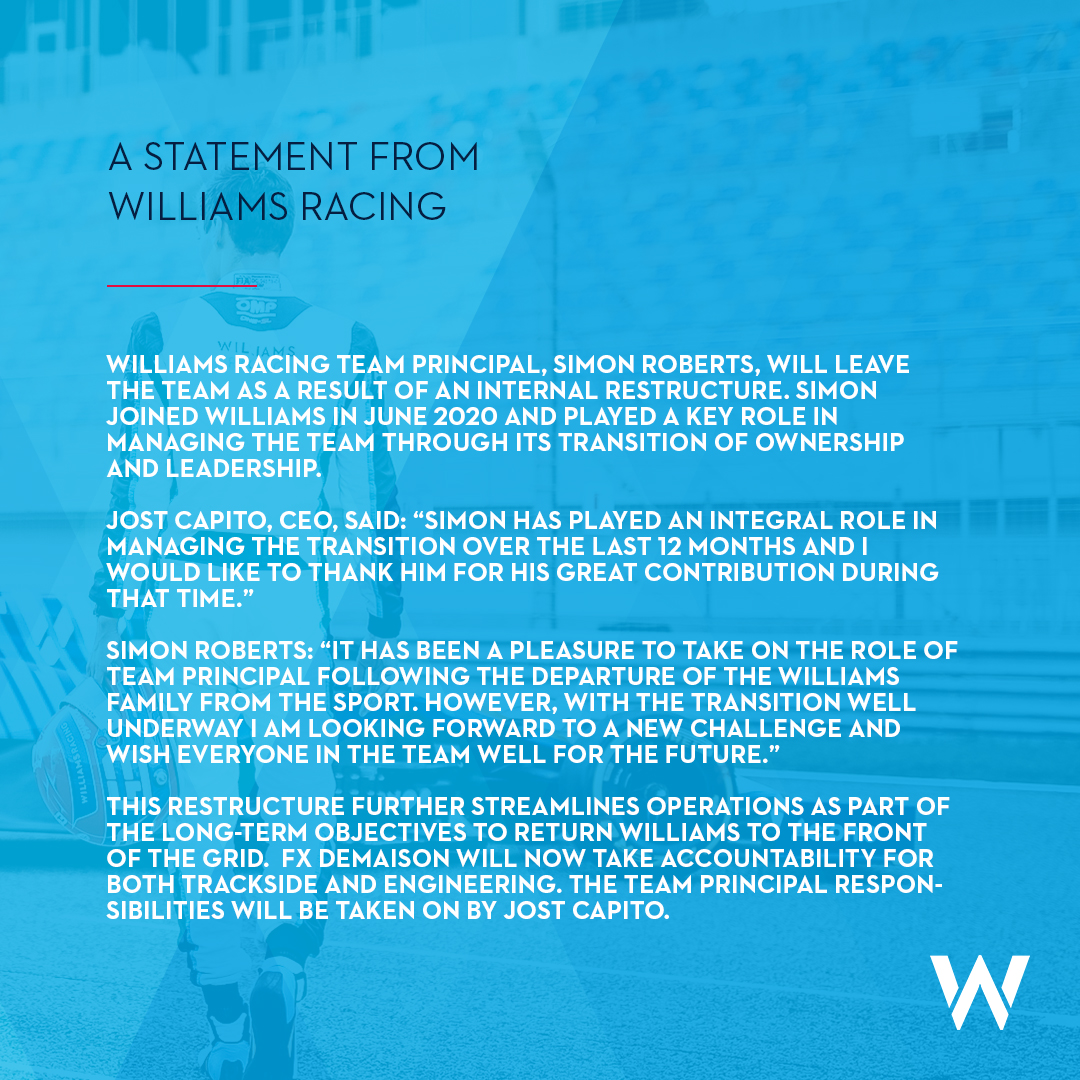 And this from the BBC.

This part from the article concerns me the most.


Capito spent his first 100 days in the job studying the company and talking to employees to try to understand why Williams had fallen to finish last in the championship for the past three years.

The 62-year-old German discovered that there was a breakdown in communication between the two different branches of engineering - the department that runs the car at the races, and the design engineers at the factory.

I just hope that Capito and FX and bring some cooperation and synchronisation back to the team... To have both development and race teams not communicating is disastrous! And I hope it can be done in time to design a decent car for the first time in 4+ years
WilliamsF1 fan since 1989
Top

I can recall Kubica saying that the guys at the track do great job at the races and that he respects them a lot. He may have noticed that breakdown too since for obvious reasons he could not value the card design very high...
Top
139 posts