Post anything that doesn't belong in any other forum, including gaming and topics unrelated to motorsport. Site specific discussions should go in the site feedback forum.
6 posts • Page 1 of 1

Now that it seems likely that Adrian Newey will be devoting time to designing America's Cup racers, perhaps it is time to open a thread on the America's Cup series.

One of the fastest clipper ships in 1851 was the America. It happened to be in jolly old England one day when it was time for the annual race around the Isle of Wight. Having just unloaded its cargo and with a short wait for its next consignment of freight to arrive at the docks, the captain decided to enter the race.

It won and took home the trophy. English yachtsmen decided to win the Cup back and a racing series was born. The trophy is called The America's Cup because it was first won by the America. If the ship had been named Grymonx, then it would have been called the Grymonx Cup and we probably wouldn't be having this discussion.

Here is the latest from the rumor mill:

Famous British sailor Sir Ben Ainslie has admitted Adrian Newey could play a key role in his America's Cup yachting project. Newey, the highest paid and most highly regarded engineer in formula one, is already making headlines after it emerged he is stepping back at Red Bull in order to get involved in other technology projects.

Increasingly frustrated with F1's ever-tightening regulations, he has admitted his interest in top yacht design in the past, and has often been linked with Ainslie. On Tuesday, Ainslie's $130 million British challenge for the 2017 America's Cup was launched. He was quoted by the Guardian: "I've had a couple of really good chats with Adrian. He's keen on racing in the America's Cup, it's great for us. He clearly has a lot of commitments still with formula one and it really depends how he can fit something in and being involved in the team," said Ainslie.

Ainslie's Newey link could tie in with the newly-revealed Red Bull 'Advanced Technologies Centre', reportedly devised to keep Newey out of the clutches of rival F1 teams. "It (yacht design) is all about aerodynamics and hydraulics so we've already started discussions with the motor sport teams in the formula one world," Ainslie said. He confirmed that Newey is "keen to help" a British team win the America's Cup."There has been a lot of talk about Adrian joining the team and I have met with Adrian a number of times," Ainslie told BBC radio.

If you have read this far, you may be interested in the following links:

If there are no responses to this thread by St. Swithern's Day, I shall delete it to save valuable server space. Enjoy!

I wonder if Red Bull would consider backing a british team? They were one of the biggest sponsors for Oracle team USA with Ben Ainslie, it might make sense for them from a marketing standpoint, if not for the nationalistic nature of the cup.
Thoughts?
Top

Actually, Ben Ainsley is a Brit, even though he spearheaded the American effort for Larry Ellison last time around. Back when I used to watch America's Cup in my own back yard (Narragansett Bay), it was very nationalistic. The designers and crew and sailmakers all had to be from one country. Formula One used to be very much of a nationalistic sport as well, with the cars dressed in British Racing Green or Italian Racing Red or German Racing Silver and so forth.

But today the sport is very multicultural. Ellison was the owner, Ainsley was the syndicate head, Jimmy Spithill, the Australian, was the skipper and the crew came from all over the globe.

I gather that Sir Ben is keen to mount a British challenge this time around. Whether Spithill will come with him, I have no idea. There's big money in the sport these days so everyone is free to maximize their market value if they can.

Whatever happens, if Newey is involved, the level of competition will jump up a notch. Or two!

Does anyone know if the boats and races will be kept to similar builds and location for the next round? Those wingsails last year... just so cool, I was playing around on a little catamaran with a similar rig, ludicrous how much power they made.
* edit. just checked and they're going with AC62 spec (check it out here:http://www.americascup.com/en/rules.html) for the 35th round, I think in the last one they were racing AC72, anyone know if they've decided to downsize for this running?
Top

I did not know the new rules package was in place already. Thanks for that information. Here it the info hot linked for those want to get there the easy way: America's Cup Rules.

Two series ago, they used 48' catamarans. For the last series, the decision was taken to push the envelope. The 72' boats were almost TWICE as fast!

I guess the thinking is that maybe the envelope got push a little too far so they have dialed it back to 62'. In addition, the bigger boats were frightfully expensive and just like in Formula One, some cost containment must be introduced to make sure enough challengers participate to keep things interesting.

But you are right about the "sails" they use. They are really programmable, high tech airfoils and it is here that Newey's contributions will be felt most, imho. His genius is being able to manage air flow.

I was amused last summer to see small boats sailing on Narragansett Bay that sported hydrofoils just like the big AC boats do and man, those little suckers were FAST!

I'd like to try one for myself some day. It's funny how technology filters down so quickly. After the Australians introduced the revolutionary "fin keel", the lowliest daysailers stared sporting fin keels as well! I suppose one day, no one will even want a monohull sailboat, except collectors and people who can't afford "the real thing".

Thought this was interesting. The 2017 Cup was won by NZ over the US team 7-1 earlier this year, as some of you may already know. One of the defining features of the NZ craft was the use of pedal-powered, rather than hand-cranked, hydraulic pumps (hydraulics are used instead of rigging to move control surfaces--the wing sail, rudders and hydroplanes).

You may be familiar with the sight of hand-cranked rigging on sailboats, and seeing crew members huffing away upon them during races. 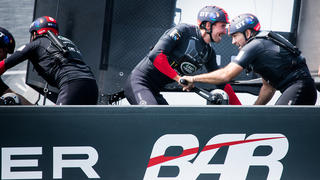 Wisely the NZ team chose to replace these with bicycle cranks. One of those "why didn't I think of that" scenarios. And they hired an Olympic cyclist to pump the pedals, to add insult to injury. Some benefits being: legs are more powerful, probably greater stamina, and a hunched over cyclist is more aerodynamic than an upright crank-churner. 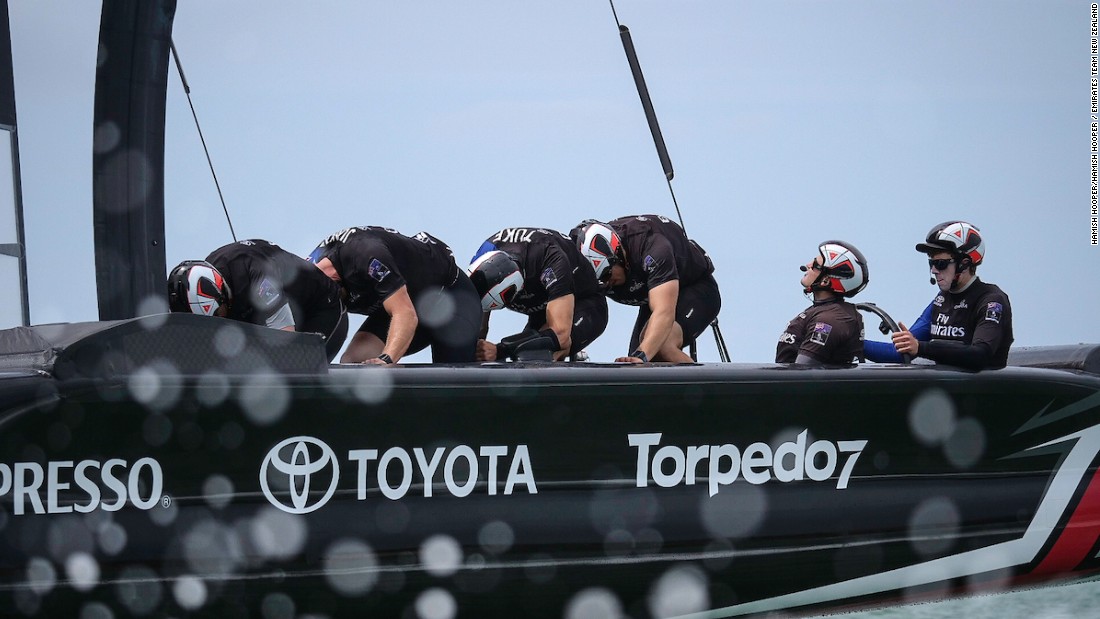