Post anything that doesn't belong in any other forum, including gaming and topics unrelated to motorsport. Site specific discussions should go in the site feedback forum.
46 posts

You just have to see this....SIX VALVES PER CYLINDER

An Experimental Maserati Engine. DOHC, 2 Rocker Arms Per Cylinder. Each Opening 3 Valves. Intake Trimese Port. Exhaust Trimese Port. Click the Thumbnail for a slightly larger and much clearer image of this engineering marvel.

I don't know why Maserati did it...but it certainly is amazing; I've never seen a six valve head before and probably never will again.
Last edited by Carlos on Mon Nov 05, 2007 1:19 am, edited 1 time in total.
Top

Was that ever used for any road or race car?
Simracing Club Ukraine
Top

Never. I guess Maserati just decided to let their engineers have a field day.

It was mean't for production, in a road car...but was never used. Could anything of cast metal ever be so beautiful?
Top

I recall that Yamaha had a six valve per cylinder motor in production on a 750 I believe. I further recall that the article stated that they had tested up to 7.

I'll google a bit and see what pop(pet)s up...
Top

oops... That was a 5 valver for the Yamaha. I did find this that was kind of interesting...

countersteer wrote:I recall that Yamaha had a six valve per cylinder motor in production on a 750 I believe. I further recall that the article stated that they had tested up to 7.

you're probably thinking of suzuki - they put out an SAE paper in the early 90's testing heads with 4, 5, 6 and 7 valves. don't have the paper number on me, though i might have a copy at home somewhere.

to cut it short they found frictional and other losses weren't worth it.

have never found a compelling reason to go beyond 4 in my own work...
Top

Carlos, interesting findings. It seems like a marvelous design and would even more interesting to see implemented on a production model, not very probable though. Good ol' Italian creativity from Maserati!


SZ wrote:have never found a compelling reason to go beyond 4 in my own work...

Must be why Ferrari left the 40 valve design on their previous V8 from the 360 Modena. Although I do not know the specific reason's for leaving that design, must be somewhere along the lines of your idea.

*I'm 99% positive on this one. I'' do a bit more research later.
Forum guide: read before posting

It's 1PM but....
countersteer is right, Yamaha introduced a 5 valve head on the FZ 750 4 cylinder back in 1990's the Genesis head...it was extremely fast, outstanding power with a very flat torque... good memory countersteer...I used to live for engine design and remember a lot...some say 4 valves is the limit matching power output and balancing manufacturing costs ... but it must be effective as Yamaha still produces a 5 valve head on the 1000cc YZFR1 today ... so it must be worth the extra complexity, especially considering they have done it on a production engine over almost 10 years ....the easiest thing is to just increase displacement ... Yamaha must know if it's worth going past 4 valves ... several of their 4 valve F1 engines were regarded as the best of the field for a year or 3 ... just struck in unproductive chassis ... countersteer... don't remember a valve Yamaha in production though I do remember they were the first to introduce a 4 valve head on a 500cc twin way, way back in the 70's ... SZ it would be interesting to see any Suzuki research on contrasts of 4,5,6,7 valve heads ... but the SAE releases so many papers might be hard to find ... even an abstract ... they charge money for those papers too, much more than they should, after all they are mean't to spread knowledge and at 15USD+ it dampens curiosity ... I have some cut away pictures of the Yamaha somewhere and I know Honda used a very trick oval piston 8 valve in a racing engine. I have a cut away somewhere ... mx_tifosi Ferrari does say 4 valves is the limit of practicality but the Japanese have other ideas ... we will have to do some more research ... I have a pile of papers and scattered references in computer files ... sure I have a picture of Honda's 8 valve... someone probably remembers it ... it was a V twin with 2, yes 2 conrods a cylinder. a twin, and was mean't to head off the Japanese 2 strokes and preserve the Honour of Honda and the 4 stroke ... I'll look for theses items the next few days ... there's a lot to say even for the 2 valve head ... different configurations accent torque against power ... my brother had a 4 valve 850cc with 2 carburettors, 2 intake ports, 2 exhaust ports and a 2 into one exhaust header, the Dr Big, on-off road motorcycle ... the b

d sold it without even asking me if I wanted it ... sold it cheap, silly man ... don't know what's the matter with him, a very odd duck, doesn't always like to spread the tach wealth among all his motorhead brothers ... human nature is very strange ... since people are interested in this and probaby have a lot of insight lets keep up the reseach ... if F1 won't open up, we can and who knows if F1 will open up the rules a bit, just limit the outrageously expensive, toxic materials ... I'd like a formula libre restricted only by a fuel capacity limit ...it's almost 2 PM and time foe milk and cookies

EDIT - Mx_tifosa. is of course right in spades, good memory, Ferrari was the only car manufacturer to go with a 5 valve production car, very progressive and innovative. Poor me

almost 5 minutes to fight my way back into signin/edit mode. so tired of this, happens over and over, if I ever find another forum, that will be 50% 0f the reason ... 2:15 PM and the cookies are getting stale ( sigh)

check out this thread:
viewtopic.php?p=12193 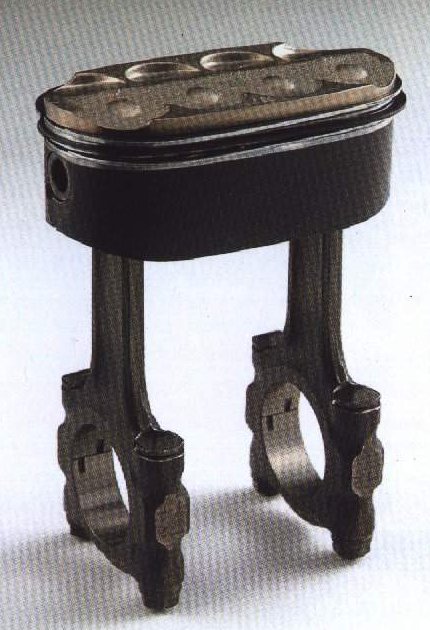 My head suggests that 4 valve is the best with "round" pistons and maybe 6 could work with ovals, but that would be difficult to manufacture
"You need great passion, because everything you do with great pleasure, you do well." -Juan Manuel Fangio

mx_tifosi there's nothing creative about 6 valves organised in an even arrangement - there's so much more to valve design and arrangement and so much that'd suck with what's in that photo.

have a think about this -

- does it give you more flow or more duration?
- what kind of cam timing can you use to drive that sort of arrangement (think physical limitations)?
- what kind of flow properties will you get?
- what kind of porting to you need to accomodate multiple valves (think of how gas speeds vary along the port)?

getting more air in is tough, sure, but there's heaps of solutions (not least keeping VE up).

Carlos, yamaha doesn't do 5 valve head in the R1 anymore. yamaha did more as a trademark than anything else; there was no competitive advantage being on an R1 vs the other 3 (4 valve) bikes in the class when yamaha last had the five valve head, if anything porting was more of a PITA and cams were a mess by comparison.

FWIW there have been other five valve head designs in passenger cars (other than ferrari). the 355 engine also has an SAE paper dedicated to it, nothing really progressive or innovative about it. there's a stack of components in the top end of it, the way ferrari chose to do the valve timing adjustment is very complicated. massive oil pressure to keep it running. have a good look at it and you'll stop wondering why valvetrain service limits on it are what they are.

the SAE paper made transactions sometime during the early 90's from memory, so it shouldn't be too hard to find in an engineering library. as for the honda NR750 engine, try SAE paper 930224.

if you like big inline twins in fun race vehicles, try the tularis. brilliant.
Top

All good questions... hope we get some input, could be some great discussions, partly I started the thread for the wonderful OH MY GOD factor and just wanted to share the enthusiasm ... but the technical analysis will be interesting.
Top

The Honda 2 conrod, 8 valve oval piston was designed to circumvent the rules in road racing. The rules specified a maximum of 4 cylinders, but Honda attacked the problem from a unique angle. They decided a V-8 was the optimum layout, so they built what is basically a V-8, but with just four pistons. That is why the pistons are oval, no reason except to get around the rules. Of course, and oval piston with oval piston rings was difficult to engineer, they actually got it on track. Not successful as a road racer, but a unique engine design.
http://en.wikipedia.org/wiki/NR500
Top

Does anyone recall the Ferrari 60-valve V12 F1 engine? My hazy memory of an article in Racecar Engineering is that Honda shared some info with Ferrari on V12 head design, the upshot being (to OVERsimplify) other things being equal, more valves equal more power but less torque.

Wouldn't it be wonderful to see mechanical innovations (as opposed to minute aero mods) in F1 again?
Enzo Ferrari was a great man. But he was not a good man. -- Phil Hill
Top

Nice engine design.
You should try to arrange the valves completly symetrical.
What I mean is, that there is allways an intake valve, exhaust valve, intake valve.

So the cylinder could be filled ideal by the gas and so getting a more ideal combustion.
But I think this arrangement is very hard to put in reallity
Top

Some of the questions may be answered in this article "Motorcycling Sacred Cows #5- Multi Valve Cylinder Heads"
http://www.motorcycleproject.com/motorc ... multi.html

Good to revisit the Honda NR 500 DaveKillens. also the thread Belatti highlighted " Why No 5 Valve Engines? " contains commentary from some of the most informed members that have ever posted on this site and is well worth reading:
viewtopic.php?t=455&postdays=0&postorder=asc&start=0
Top
46 posts