Please discuss here all your remarks and pose your questions about all racing series, except Formula One. Both technical and other questions about GP2, Touring cars, IRL, LMS, ...
151 posts

What looks great for a championship fight is that Honda is nowhere.

I think this is wrong. Compare #6's performance last year to this year. He is better. #44 also said that they have good pace but can not get good results because of starting positions. #44 was not far away from leading pack until he make a mistake. What that mean is if there were #93, that gap is not an important gap. It looks like ( to me at least ) Honda is best bike out there. (the bike looks like it keeps it's front end issue).
In fact it was best last year too. If #93 were there last year would finish all race domination of MM.

So Ducati was best bike when Stonner did win? I think it´s a pretty similar scenario, with only one rider being able to be fast with that bike. To me that´s light years from being the best bike

Honda best results have been 8th and 13th. No way that´s best bike, I think not even in top 3. Ducati, Yamaha and Suzuki are easily faster, but KTM and even Aprilia may be tough contenders for Honda right now, actually in last GP both got better results than Honda

Differences are small tough, but in racing it´s results what counts, the rest is smoke
Top

Andres125sx wrote: ↑
Sat Apr 10, 2021 11:15 am
So Ducati was best bike when Stonner did win? I think it´s a pretty similar scenario, with only one rider being able to be fast with that bike. To me that´s light years from being the best bike

the difference is, stoner couldn't repeat the performance. so ducati was indeed very good in the year he won the title.

honda was always was a great bike, only with marc. just like the current set of riders, previous team mates of marc also struggled. the question mark is, if marc can still do what he used to do.
Top

I think my point is very clear, the riders we can not compare with MM can match race pace with current bike and not far away from winning bike when race finish. So bike is good, according to me, according to my logic best but not with big margin which is not nobody want to see. Because we want to see competition. I think MM will easily win with this bike.
Top

I think close pace in races at Qatar was because they all wanted to protect their soft tires, as mediums which would have lasted no problem were too slow to use. And that was especially the case in Doha GP when they all saw how you can fall down the order mid race if you push your tires too much in the first half.

Basically, what I'm saying is that grid isn't that close and that it was just because of tire choice by Michelin and race strategies from teams.

Another reason of why I, and a lot of us, think that it is MM who's dragging Honda above where it should be:
2019: MM won riders championship, Honda took manufacturers championship (but that is expected since only top placed rider counts towards that one) and Repsol team took team championship even though the riders on 2nd bike were 19th (Lorenzo) and 21st (Bradl) with 28 and 16 points respectively. That means that 2nd bike got Repsol team 44 points out of 458 they won the championship with.

2020: without Marquez best placed Honda rider was Nakagami with 116 points, while in manufacturers championship they were only better than Aprilia. And in teams championship that same championship winning Repsol team was 8th. Even the sattelite LCR team was one spot above them
Top

Yeah I completely agree. You could see how everyone was happy to sit there all the time Martin was leading, as soon as the lead changed, a few bikes then made a quick attempt to move forward with their pace in hand.

The likes of Martin leading the race for so long, while Pol & Nakagami couldn't get anywhere near the front just tells me the Ducati is ahead of the Honda.
GoLandoGo
Lewis v2.0
King George has arrived.

Dovizioso back on MotoGP bike at Jerez testing for Aprilia

Video of Dovi in Jerez

About and hour ago Marquez has completed his last physical check and has been given a GO for competing this weekend
https://www.motogp.com/en/news/2021/04/ ... mao/368113
Top

Great, we´ll see how he performs after so long. When was his last race?
Top 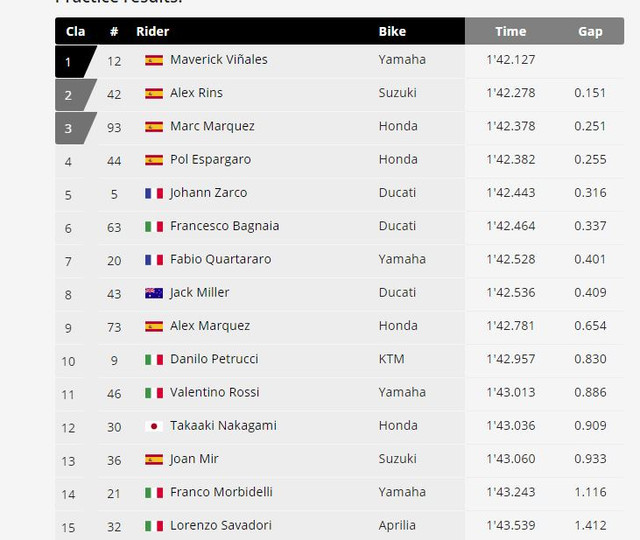 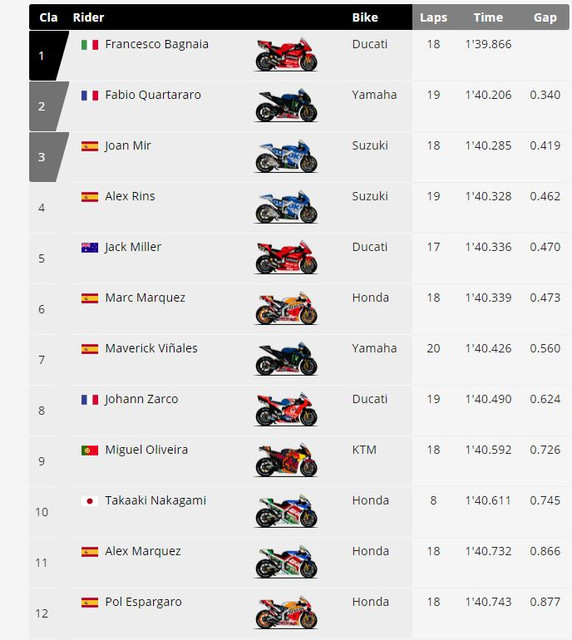 second row start for marc with just under 3 tenths. quite an astonishing achievement, despite a very cautious approach to qualifying. hope he can be on podium tomorrow if his arm holds up in strength.
Top

MKlaus wrote: ↑
Sat Apr 17, 2021 6:26 pm
second row start for marc with just under 3 tenths. quite an astonishing achievement, despite a very cautious approach to qualifying. hope he can be on podium tomorrow if his arm holds up in strength.

He was better at his second run until make a mistake. I think he has a bit numbness at his right arm. He was shaking his arm before riding the bike. When I think that he was not accepting to taking painkiller for better feeling to bike, at his injuries before this, adding Honda's front end issue to that, it is bad him to making that last tenths to go pole. Hope he will ride safe.
I think PE and AM also were good. This maybe a better race weekend for honda( I hope)
Top