Post here all non technical related topics about Formula One. This includes race results, discussions, testing analysis etc. TV coverage and other personal questions should be in Off topic chat.
3627 posts

What kind of car are you currently driving in England?

Albon: At the moment I only have one civic. This is a bit boring.

Is it at least the Type-R version?

Albon: No, unfortunately not. I'm just fighting to get the Type-R. I ask the boys several times a day. I hope the car is delivered before Melbourne.

I fully expect Honda and its turbo and ERS suppliers to up the ante and aim to out develop the other PU manufacturers this year.

While focus has been on ICE the other departments should see innovations that have been in the making for years finally come to fruition.

I'm starting to see/hear of glimpses of Honda ingenuity pooling from all its R&D resources making inroads into F1 relevance. Battery energy density, recovery and deployment should take a step forward this year. It seems like Honda has awoken from their slumber.
Top

Honda's ambitious power targets for 2019 helped fuel supplier ExxonMobil to fast-track through a series of upgrades this winter that normally would have only happened during the season.

With Honda's sights set on delivering race victories this year as the result of its tie-up with Red Bull, ExxonMobil has revealed the scale of the push that the Japanese manufacturer is making.

With ExxonMobil having developed and tested more than 36 engine oils and 40 fuel variations ahead of the start of the campaign, its global motorsports technology manager David Tsurusaki says his company has been pushed to the limit to come up with the best products it can.

"We have gone through upgrades during the winter, even though we never got to race them, because we got so much data back and so much information back," Tsurusaki told Motorsport.com.

"We had enough time to make these changes, so we said: 'let's keep going'. We were in Japan in early December and we discussed what was the very last deadline to make a final change – as they were asking us.

"We said we had begun shipping for Barcelona testing, but we agreed that we could airfreight something new if we made another change. So we did that.

"We are now already working on when can we get the next upgrades planned, when can we have [dyno] testing time availability and all of that."

ExxonMobil's progress with previous partner Renault was hampered by Red Bull having a customer relationship with the French car manufacturer, so dyno testing availability was limited.

That is not the case with Honda, with Tsurusaki saying that the pressure has shifted on to his company's shoulders to try to keep up with what the Japanese manufacturer wants.


"It is sometimes difficult when they say: 'we are ready to test, can you have something ready in three weeks?'" he said.

"But most of the time we can do it we can get it done. I think our guys thrive on that.

"I think it is nice to be in a situation where you are jointly working to progress forward, and we are okay with them giving us a timeline and we can meet it or not meet it. It is still a big jump from where we were, before so it is good."

No matter the result of Australia, they are already a team of champions for me.
I thought that this kind of attitude no longer existed in F1..
Top

Just because they said it out loud, doesn't mean that other teams don't do the same...
Top

Not necessarily, but like myself, he probably believes the words from Honda, Exxon Mobil, and what's the reason to doubt Red Bull announcing they are bring their China GP upgrade forward to Melbourne?

As far as I can see, there has been zero sensationalist claims from Red Bull or Honda for 2019. Marko hopes to win 5 GP's, just one more than last year, which is hardly an unrealistic goal, Horner says the rear end is one of the best packaged units he's seen, which again, it's likely because it's finally a semi-works outfit with input from both sides, if it was roles reversed and Renault were only an engine supplier and creating a works team with RBR, it would probably be a similar outcome. They are probably also not hating the money they've saved in engine costs either..

Exxon, as stated in the article above, are loving the dedicated dyno time Honda provides and they seem to be reaping the benefits even before the season starts.

Honda, with the very little they do share now, is openly critical of themselves and in the typical Japanese mentality, when it is known more can be done, they will never be satisfied, evidenced by the fact STR and RBR are both claiming Honda have more than exceeded their agreed 2019 start targets, yet Tanabe says "We are not 100% happy yet, we know there is a lot of work to do to surpass Mercedes and Ferrari, so until then I cannot say we are can be happy".

So I'm not entirely sure why there is so much shade thrown at the team... They are proving to be realistic, motivational and they seem to be very supportive of each other, which a team needs to be! There is a lot of good pouring out from this partnership and yet there is a lot of hate without much substance is being tossed around here.
Top

The only sensible conclusion can be they may match their performance difference to last year to Ferrari or Mercedes? If you're going for more than that I think you're being naive on the oppositions capability.

They could have made up the ground.... they could have done a lot of things. But there's little evidence of it.... so it's clutching a little. Personally I think we'll see teething issues all year with good spells of pace.

What Red Bull do well though is develop and push through the season. If Honda can keep their pace the second part of the season could be interesting but Mercedes will be strong, they always are and Ferrari will be making an effort to keep the pace up after last year.
Top 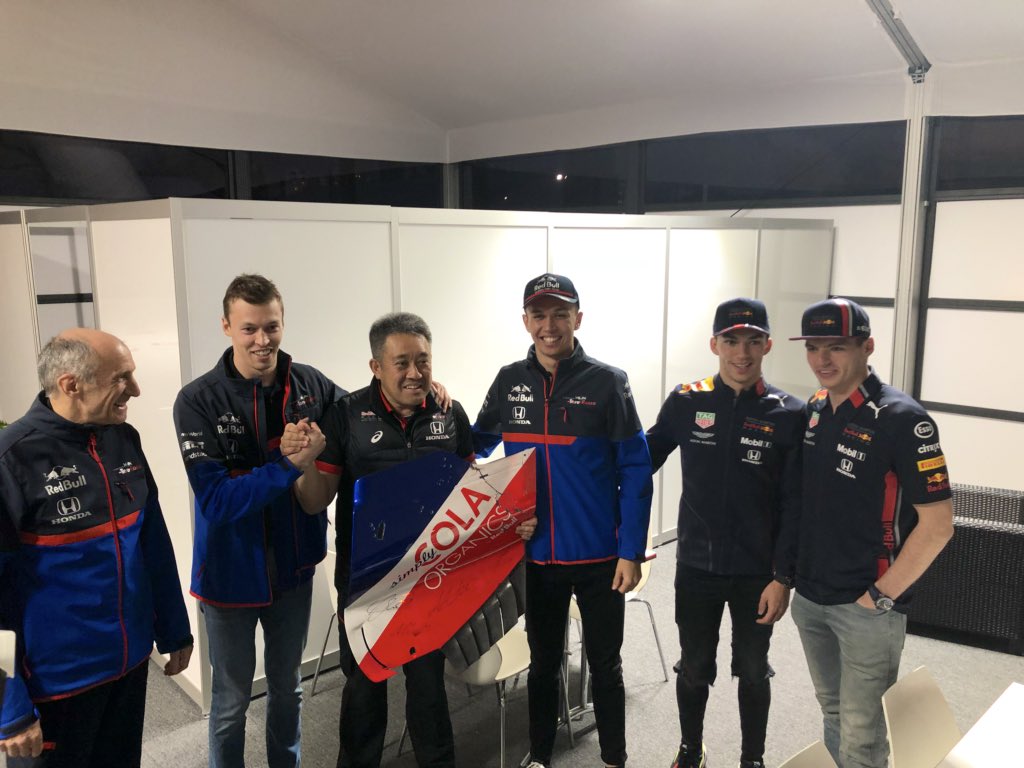 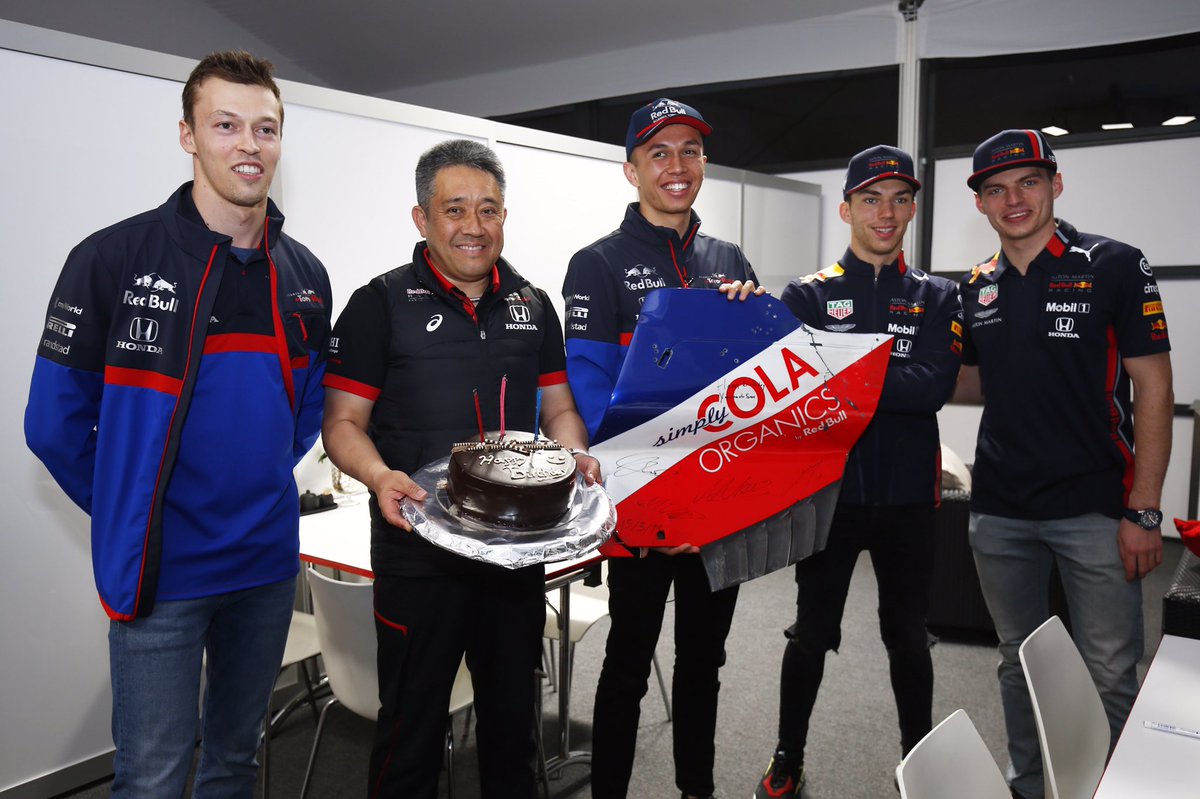 Congratulations to all the hard working men and women of Honda! Your efforts have finally yielded result!

Hopefully the first of many yet to come.
Top 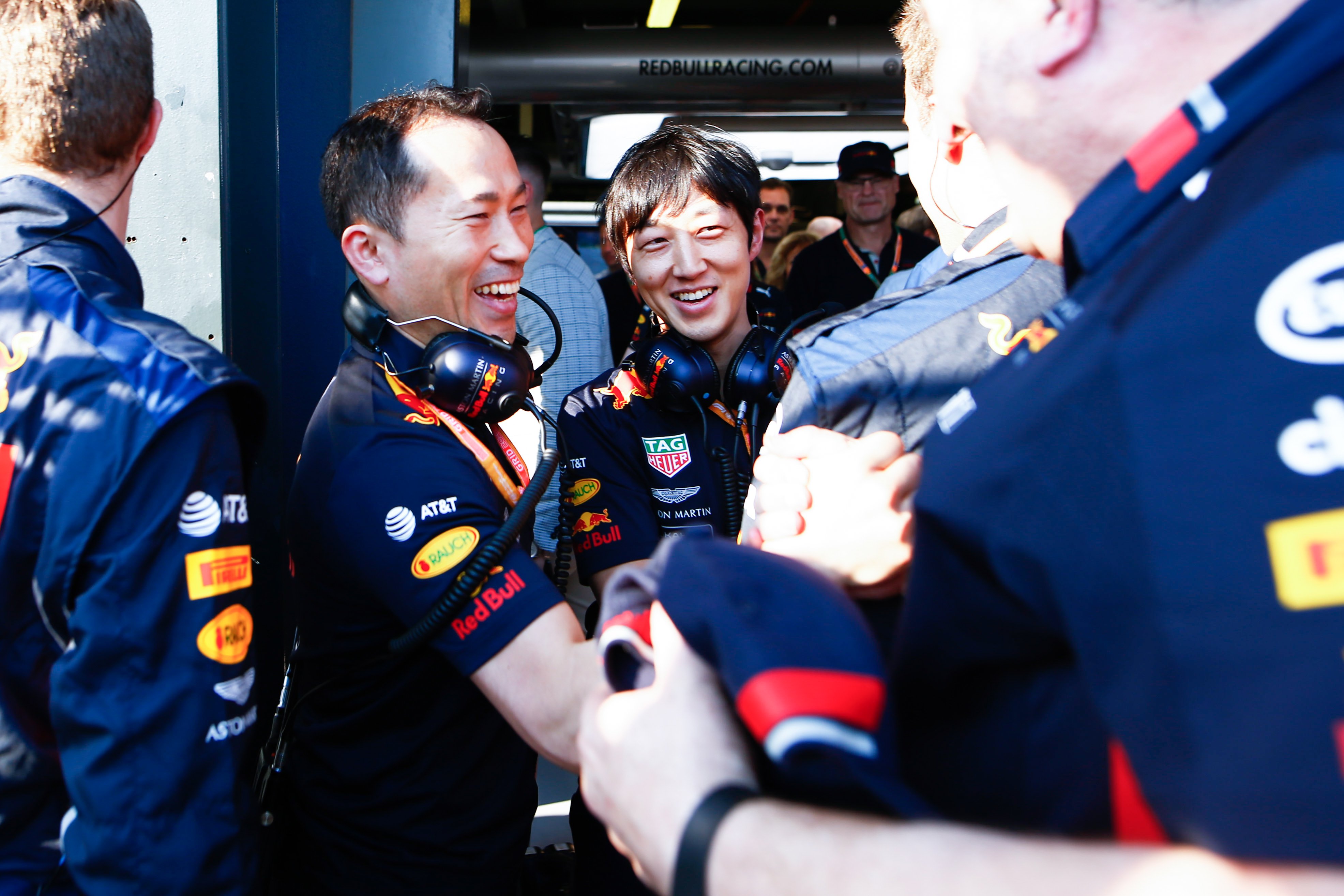 Congratulations to Honda and all fans here and every where.
Interestingly no Honda logos visible anywhere in the pic above
Top

@sn809 it's just a picture taken in the moment, or do you think the set a stage with Honda-Logo and all

Strive for continuous improvement, instead of perfection.
"Most people seem to turn off their brain when they turn on the computer and log in to social media."
Top
3627 posts