All that has to do with the power train, gearbox, clutch, fuels and lubricants, etc. Generally the mechanical side of Formula One.
15 posts • Page 1 of 1

Another part under the spot light, this time the F1 Oil Tank.

In this thread I will be unlocking a few secrets hidden within this part - The F1 Oil Tank, mainly its construction and some other features.

An F1 engine uses what is called a dry sump oil system. This is different to a normal road car where the oil is contained in a ''wet sump'' located at the bottom of the engine. This system is shown below - oil is filled in the top of the engine and finds its way to the sump. As the oil drains from the engine bearings and cylinder head it flows down and back to the sump under gravity. It is then filtered and pumped around the engine again. This system is cheap and closed loop. However, because large quantities of oil sit very near the crankshaft this can cause large power losses known as windage whereby the oil sloshes around and hits the crankshaft slowing it down.

In a dry sump system, the oil tank is located away from the engine and the oil sump becomes more of a collection tray for used oil that is expelled from the engine bearings during running. Oil collection pumps called scavenge pumps are located along the shallow oil sump collection tray. These collection pumps have two purposes in basic terms - to collect the oil that has collected in the tray, and also to collect blow by gasses - the combustion gasses that make their way past the piston rings. This is a bonus in terms of power as blow by gasses can collect in the sump and increase pumping resistance of the pistons above them. The scavenge pumps do the job of making sure all this pressurized gas is removed from sump so that sump case pressure is not an issue.

A basic layout of the dry sump system is shown below,

In real life on an F1 V10 Cosworth Engine you can see the collection ports and scavenge pump layout below,

The part below is from the Honda V8 Engine.

Just to give a quick overview - the oil tank is attached to the front of the engine behind the fuel cell. Its job is to act as a storage tank for the engine oil. The base of the tank contains a large outlet that attaches onto the oil pump entry port.It is important this is large and as near as possible to the pump inlet to avoid cavitation. The tank also contains many other ports - an oil drain at the bottom, breather port, oil level port, and return ports from the scavenge pump centrifuge. On the return from the scavenge pump centrifuge - the oil enters the main cyclone within the oil tank. The oil and air mix is then given its final separation treatment using cyclonic separation. Since the air and oil mix enters the top of the cyclone tanks tangentially and at high velocity, rotational effects and gravity work to expel any air left in the incoming oil. The tank contains three cyclones. The main larger central cyclone takes the bulk of the oil from the dry sump system. The other two smaller cyclones take the rest from the pressurized scavenge pump bypass. A unique feature of the Honda dry sump system is that the scavenge rotors compress the outgoing air/oil mixture. A compression ratio of two was chosen and this in turn reduced pump drive resistance by 30% which as a whole saw engine friction reduce by 3KW. However, with this system, if the pump was to take in pure oil - this cannot be compressed, so a scavenge pump bypass was fitted - the outlet from this leads to the two smaller cyclones.

This system although sounds complex shall be displayed later below.

Onto the oil tank - the tank was cut using a 1mm wide blade. Since internal makeup was unknown, a sensible cut plan was chosen to best display all features which could possibly lie within.

The tank below, it measures approximately 650mm high, 180mm wide, and 180mm deep, the round elbow fitting being the main entry at top,

The oil entry ports from scavenge pumps and bypass,

The main location grommet at top,

As we now start to remove the cut sections the interior construction becomes clear,

An investment cast titanium diffuser can be seen at the bottom of the main cyclone,

The air vent at the very top,

Details of the main entry,

The general engine and tank internals layout from Honda F1- the bypass pressure loop can also be seen as mentioned above,

Happy to answer any further questions regarding internal pipework routing,


With all of the above in mind I hope the thread and information here has helped everyone from Casual Viewers, Enthusiasts, F1 fans, Engineers, Designers, and Students Worldwide, - If you know anyone whom you think would like to see it or perhaps wants the best tank design for their dry sump system please share this link!

Brian, thank you as always for your exploration and detailed description.

Looking at the part I'm amazed by the complexity of the composite fabrication. Looking at the sections I'm wondering If you can tell how it has been made. It appears in some places that there may be several components assembled with adhesive, but it might just be in mould reinforcement using metal or other materials.

Thanks for the detailed & well-illustrated presentation Brian,
& without wanting to 'rain on your parade', I am compelled to
point out that those air-oil scavenge separation sophistications
were sorted out by aero-engines, ~3/4's of a century ago, not
least by Mercedes-Benz under wartime duress, when forced to
relinquish low-pressure/flow rolling-element crankshafts & adopt
plain bearings as a mass-production expedient, semi-unwillingly.

Of course even mundane production motorcycles such as Honda's
own 750/4 of over 50 years ago featured like a 'dry-sump' oil-system,
(albeit I was amazed at how much oil was still in the engine unit, & spilt
on the floor, while helping a friend struggling to release the lump from
frame for repairs, even after pre-draining the oil-tank & filter galleries).

Again, a decade & a 1/2 later, Yamaha offered a 500cc road bike with
a gearbox featuring a pumped oil-supply, keeping the cogs/shafts free
from the wet-sump drag/heat, in the RZ/RD V4.
We are standing on the toes of Hobbits. So wear safety boots.
Top

Nathan, I shall go through that shortly,

@JAW, I didn't realize aero engine scavenge pumps compressed the oil air mix on the return leg but could also redirect if pumping just oil - did you read the Honda pages I linked above?

@JAW, I didn't realize aero engine scavenge pumps compressed the oil air mix on the return leg but could also redirect if pumping just oil - did you read the Honda pages I linked above?

Yes, thanks Brian, & that's why I noted that I'd seen such a sophisticated system before:

Scroll through to 53:40 in this video & see the oil circulation diagram.

I must brush up on my German...

Actually you need to look 1 minute earlier - 52:40 to get all the info on the oil centrifuge.

Wonderful video thanks J.A.W. - I watched it all and learned so much.
je suis charlie
Top

Thanks gg, for spotting the timing typo!
Like F1 - increasing performance came before cost - in ensuring the win...
We are standing on the toes of Hobbits. So wear safety boots.
Top

I'm amazed at the complexity of that oil centrifuge, shape and the titanium diffuser which is then interfered with with a very sloppy application of adhesive though

I can't get my head around why they would make the diffuser from titanium instead of aluminium or magnesium.
Top

PhillipM wrote: ↑
Mon Mar 29, 2021 10:12 am
I mean in that case it was still cost driven - you get 5% more performance and your plane starts coming back just for refuelling and repairs - instead of you having to build new ones

Actually PhillipM, you have it 1/2 right, since the idea of a performance advantage - was also to
ensure that your opponents lose (& DNF) - plus you are building more new/improved ones as well.
We are standing on the toes of Hobbits. So wear safety boots.
Top

That excess resin at the junction was probably killing all the aerodynamic design efforts in the diffuser.
Top

Great topic. Thanks Brian G.
So the scavenged oil is sent to the cooler first, then it went to the oil tank... It seems to be the case in this 2014 Renault/Caterham too (thanks Kev-f1 for the pics)
So the oil is first cooled by the orange rad and is sent to the grey oil tank via the blue pipe... 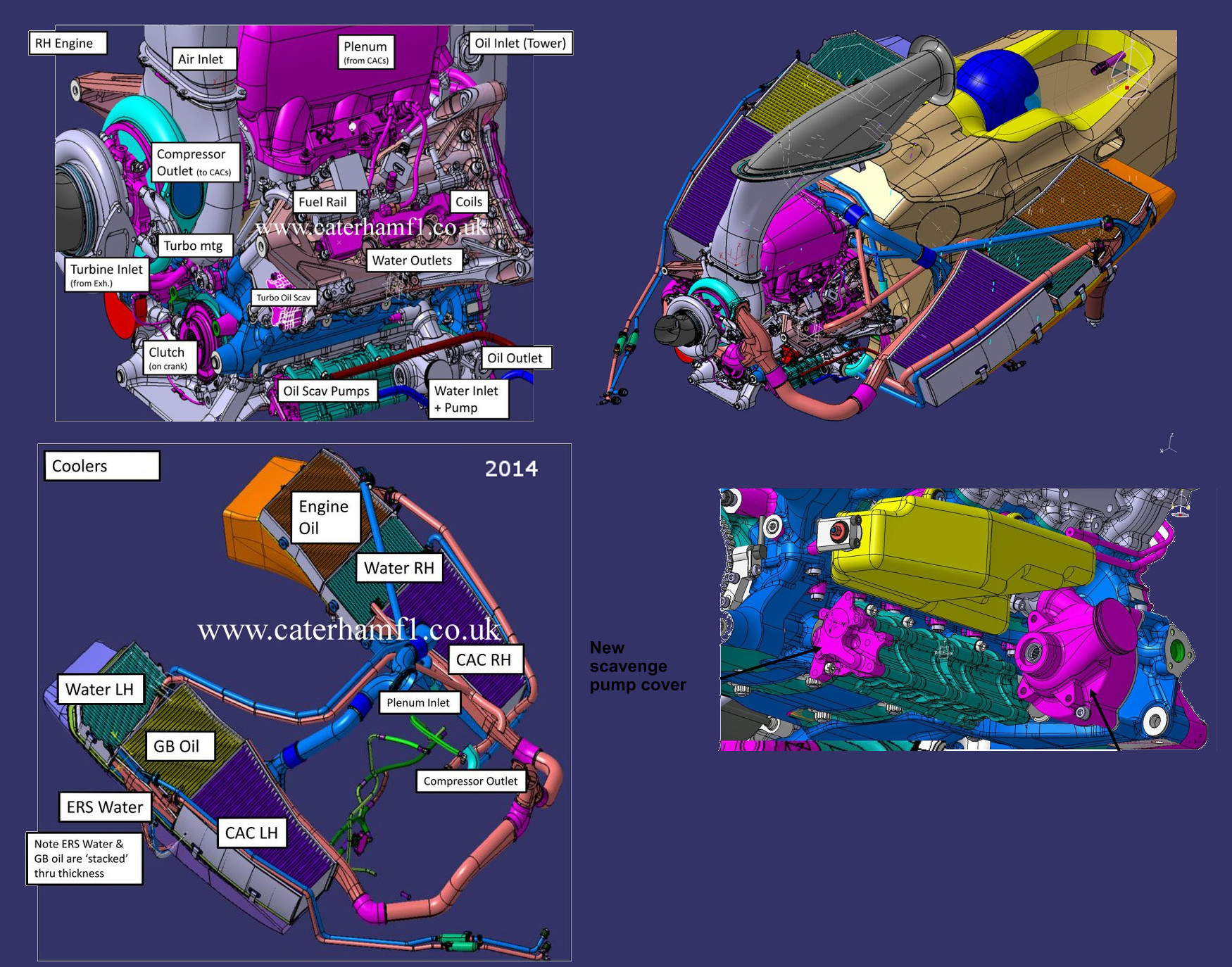 But I've red somewhere that (some engines?) send the scavenged oil directly the the oil tank, and the latter passes it later the the radiator after the oil-air separation process...
Top

That excess resin at the junction was probably killing all the aerodynamic design efforts in the diffuser.

The excess resin looks to be on the tank wall and probably didn't affect flow from the diffuser. This is a good topic, thanks for it; the complexity of the oil tank is interesting and as I recall Honda did have an issue with the oil tank that seriously affected engine performance in early engines.

Off topic a bit, but I remember installing a new engine in my Van Diemen FF1600; someone, who was not me, installed filter oil lines backwards. When we started the engine the filter started swelling like something in a Wylie Coyote cartoon. I yelled to shut it down but the thing just ballooned out and burst. What a mess.
Top

PhillipM wrote: ↑
Mon Mar 29, 2021 10:12 am
I'm amazed at the complexity of that oil centrifuge, shape and the titanium diffuser which is then interfered with with a very sloppy application of adhesive though

Rodak wrote: ↑
Wed Apr 07, 2021 6:00 am
Off topic a bit, but I remember installing a new engine in my Van Diemen FF1600; someone, who was not me, installed filter oil lines backwards. When we started the engine the filter started swelling like something in a Wylie Coyote cartoon. I yelled to shut it down but the thing just ballooned out and burst. What a mess.