Your numbers are not correct: 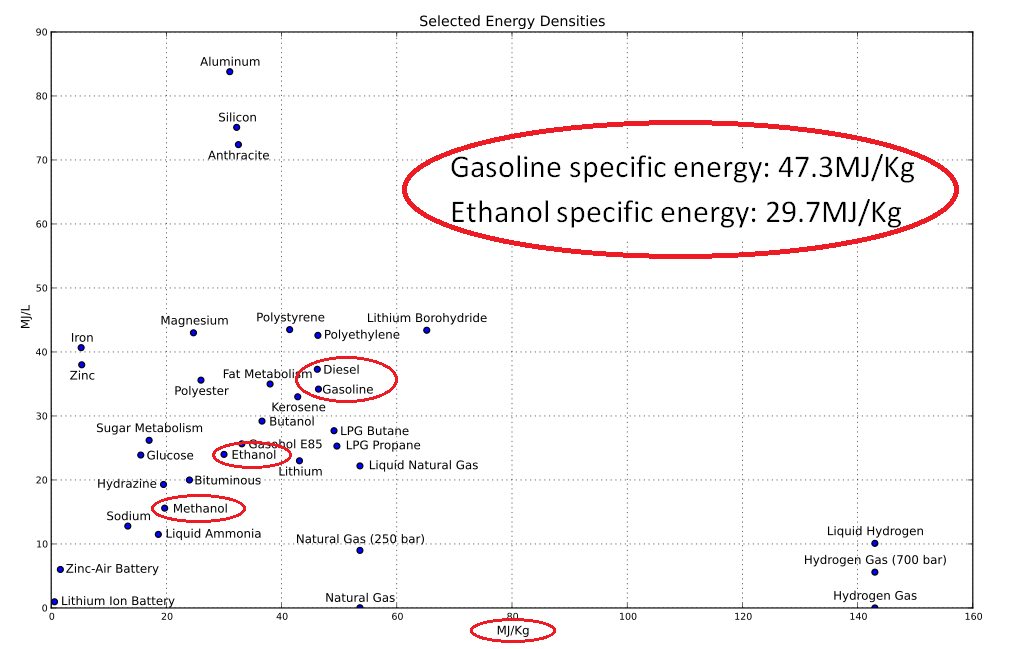 You better tell this guy he can't be flying Manolis.

I never wrote that a Flying Device can't fly on ethanol.

What I wrote is that the range (and the flying duration) will decrease significantly if the engine runs on ethanol.

To make it simpler:

If you have to go from an island to another island 350 - 400Km away, with gasoline fuel you can go, with ethanol fuel you cannot.

The difference of the energy densities is so big that you need an extreme increase of the BTE (Brake Thermal Efficiency) to compensate for the heavier ethanol fuel (case of engine running initially on gasoline). So forget it.

In the case of a compression ignition (Diesel) engine (like the PatOP of my last post), the BTE is way higher than the efficiency of the engine running on ethanol. So forget it completely.


Worth to mention: even a slight improvement of the BTE when the engine fuel changes from gasoline to ethanol is questionable.


Conclusion: the ethanol is not a good fuel for Flying Devices, because it is heavy for its energy content.

importantly .....
by universal convention BTE is based on fuel energy judged available to conventional engines - ie on Lower Heating Value
(not on specific energy which amount to Upper Heating Value)
LHV is less than UHV because in part fuel burning produces water vapour, trapping energy in latent heat of vapourisation

I guess those that don't know how to use E85 shouldn't use it then.

Those of us that do, will continue to use it successfully. Transfer Port Injection will deliver 14 to 21% better fuel economy over a carburetor, bringing fuel burn even closer to a carburetor on petrol in a loop scavenge twostroke. Still a lot better than electric.
Anyway like I said Im not going to debate this, even though I appear to.
Top

But for a Flying Device the E85 is too heavy relative to its energy content.
For the same range (or flight duration) you need to carry more than 50% more fuel; the increased weight of the fuel requires more power (to keep it in air), which in turn consumes energy faster requiring even more fuel.

In a similar way, a modern battery is a good source of energy (for cars, motorcycles, trucks, boats, etc), but not for Flying Devices.

Back to 2-stroke engines:

The OPRE Tilting engine of the Portable Flyer:

It starts at high pressure (tilting valve still closed, small dead volume in the scavenge side of the piston); the transfer ports open after the exhaust ports, but substantially sooner than in the conventional 2-strokes; and when the piston is near its “BDC” the tilting valve opens and the scavenging continues “inertially”.

For the moment the prototypes run with carburetors on gasoline. Later we’ll try injection (either directly inside the cylinder or outside).

The focus is, among others, on:
weight reduction,
compactness,
vibrations and reaction elimination (the engines are fixed / secured on pilot's body),
gyroscopic rigidity elimination (otherwise the Portable Flyer is not controllable),
high revving (at low friction),
easy / lightweight synchronization of the two crankshafts,
simplicity,
low cost.

Hi Manolis, when are you expecting to do your first flight tests?
Top

pictures? how on this forum? Remind me.
Top

butanol (and isobutanol of course) has an airmass-specific energy of 3.6 MJ/kg (corresponding to LCV)
so butanol fuel gives our 250cc engine 24% more power than gasoline does
NOTE TO SELF - THIS IS WIKI UNSOURCED DATA THAT DOESN'T CHECK OUT !!!!


(bio)butanol is of course quite competitive for heavier-than-air aviation
having 'only' about 17% more fuel weight for a given amount of energy
and competitive octane number - eg isobutanol particularly
Last edited by Tommy Cookers on Thu Sep 17, 2020 9:06 pm, edited 6 times in total.
Top

There is the "button" insert image in the editor heading.

You write:
"Hi Manolis, when are you expecting to do your first flight tests?"


Hard to say.
So far, so good.
One step at a time.
The project proceeds well.

Manolis, why are the two gears in your engine gif above changing size and shape as they rotate?
Top

You write:
"Manolis, why are the two gears in your engine gif above changing size and shape as they rotate?"


Because besides being the synchronizing gears, they are also the two (of the four in total) crankshaft balance webs.
I.e. they are thinner at one side and thicker at their anti-diametrical side.

The engine shown in the GIF-video is the first OPRE Tilting prototype made.
For the synchronization of the two crankshafts of this first prototype, one only gearwheel from the market was purchased; this gearwheel was cut offset (the cutting plane was obligue relative to the gearwheel rotation axis) to create the pair of gears / balance webs shown in the GIF video-animation.

For each one of the next OPRE Tilting engines made, they were used two gearwheels (ready from the market, again); in the hub of each gearwheel it is cut (in a CNC milling machine) a sprocket wherein the toothed belt of the transmission to the propeller engages. 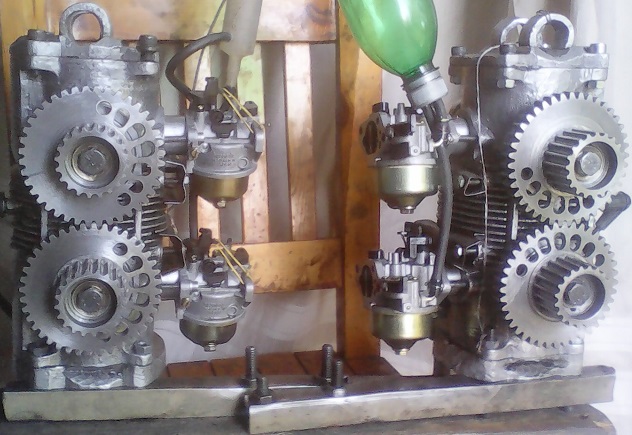 As in the first prototype, each synchronizing gearwheel acts as a balance web, too (see the holes; at the back side of the gearwheel - not shown - a lot of material (behind the holes) is removed).

In the opposite side of each crankshaft there is another balance web: 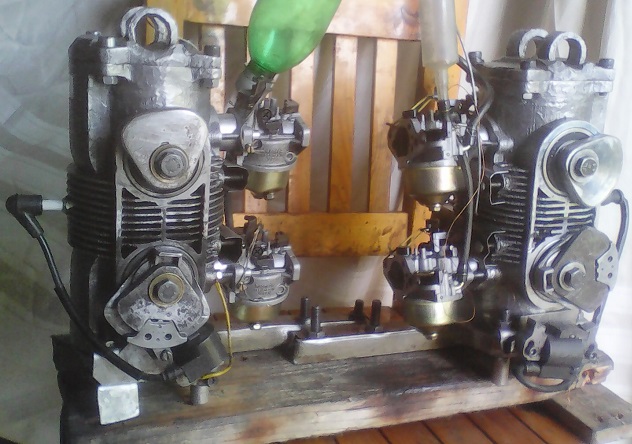 (in the lower balance web of each engine of the above photo it is secured the permanent magnet that actuates the ignition coil).


With the two crankshafts of the OPRE Tilting operating at zero phase difference, the synchronizing gearwheels need neither covers, nor lubrication because excluding the cranking, for the rest time they operate unloaded.

Per OPRE Tilting engine there are two "crankcases", one per piston.
The crankcase is the space inside the piston and around the crankshaft that "passes through the piston" between the two ends of the piston:


Oppositely to the conventional two-strokes, the "crankcases" of the OPRE Tilting run at pressures lower than the ambient pressure (think why).

With the "cramkcase" running at lower - than ambient - pressures, the sealing is simple and easy .

Had a little engine out in this one the other day, very thankful its an AUTOgyro, safe, quiet landing. Id hate to be in any rotorcraft without this capability. NOT my video but this is my ' personal flyer'.
For the minute on petrol, carburetors but next engine will be E85 with TPI. Yes, twostroke powered.

uniflow wrote: ↑
Fri Sep 18, 2020 2:40 am
Had a little engine out in this one the other day, very thankful its an AUTOgyro, safe, quiet landing. Id hate to be in any rotorcraft without this capability.

Awesome mate, I spent the first 6 years of my life at Galatea (my parents farmed there). Amazing coincidence.

(And I see Autoflight in in the Waikato? do you also fly out of Matamata perhaps? that's really on my old back door step!)
Top

Yes I fly my two seat Gyro out of Matamata.
I guess you might know the Carters from Galatea, Andrew and Maryanne?
Andrew is the Galatea airstrip' caretaker' these days.
Top

Weird. I have relatives who own the dairy farm where Hobbiton (Lord of the Rings) was filmed. My daughter got to see it while it was still off limits to the public; a very big coup in school.
Top
3950 posts