This was the first day of practice at a permanent race track since the Spanish Grand Prix weekend in early May. We had fine weather with relatively high air and track temperatures during the sessions, particularly in the afternoon. For this race, at Red Bull Racing Honda, Max Verstappen and Sergio Perez ran new PUs, as did Pierre Gasly at Scuderia AlphaTauri Honda and we had no major issues throughout the day, going through the basic programme and function tests for a new PU, in addition to the usual job of gathering data. It looks as though the competition will again be very close with our nearest rivals. In this situation very small gaps can make a big difference to the final result, so we will be paying close attention to the smallest details with both our teams to optimise our PU performance for qualifying and the race.

https://honda.racing/f1/post/practice-france
The Power of Honda!
Top

PlatinumZealot wrote: ↑
Fri Jun 18, 2021 5:43 pm
I ran one of these articles through a translator a few times. It's not so hard actually to connect the dots because the information is mostly superficial and usually Honda posts a lot imagery around it.

The most complex release they made was the one in 2016(2017?) On the MGUK management and extra harvest. I didn't need perfect translation even thought concopt was so complex because they had beautiful telemtry and numbers. And you know what they say in engineering.... Our language is numbers and diagrams.

Good for you, whatever it was that you were trying to learn or find out. Did you use a human translator or an image to text software? Or Google translate? Sure nothing was lost in translation?
As they say, the devil is in the details.
Top

At the time i was looking at the energy graphs and the layout of the engine. Certain key words would tell me enough becauase Honda aren't going to say anything too detailed anyway.

For example to this day, no one knows what combustion method honda is using in F1.
We saw some patents about TJI with one injector for a Motorcylce engine, but nothing about F1.

Wazari was also a bit mumm about the exact method of combustion. He spoke a bit about the cylinder firing order and balancing and oil management etc.
🖐️✌️☝️👀👌

With Max taking his and the team’s second pole of the year, after the one at the season-opener in Bahrain and having three Honda powered cars in the top six, the result of today’s qualifying for the French Grand Prix was very good for us. Max had already been quickest in FP2 and 3 and made no mistakes in qualifying, and to be 0.258 seconds ahead of the second placed driver is an exceptional performance. Sergio secured fourth place with a time that is very close to that of the third placed driver. Having both Red Bull Racing Honda’s sharing the front two rows with the two Mercedes is also important in terms of tomorrow’s race strategy. In his home Grand Prix, for Scuderia AlphaTauri Honda, Pierre made progress through all the sessions and he is also in a strong position, sixth behind Perez. He has done an excellent job recently, this being the third consecutive time he has qualified in the top six. He has shown consistent race pace all season and so we can expect him to move up the order tomorrow. Yuki had a disappointing qualifying, crashing out right at the start of Q1. But in free practice, he has been quick, he knows this track and so he can have a solid race and most importantly for him, finish the race. Overall, it is very satisfying to take pole now that we are back at a permanent race track and just as we go into a series of three races on consecutive weekend. But tomorrow is what matters and anything can happen, so we will be simulating various scenarios tonight.

To be able to put it on pole here, on a track that has not been our favourite in terms of performance, is very promising and a big boost for the Team. We really did not expect it so I am of course very happy. Everything has been working really well all weekend and from today even compared to yesterday we made a good improvement through hard work and maximising set-up. I was confident after FP3 but you never really know where you are or what everyone else will bring in Qualifying, so we should be very happy with this performance so far. There is a long run to Turn 1 so we have to get a good start tomorrow and for sure they will be very close but our long run pace in FP2 looked good so I expect another tight battle.

https://honda.racing/f1/post/qualifying-france
The Power of Honda!
Top


you have to post it in every relevant thread?
https://t.me/pump_upp
Top

No big deal, but prefer a single thread to be chosen.
Top

Three wins on the bounce

Let's have both drivers on the podium in the Austrian races and I'll start to believe the WCC is on. I couldn't care less about the WDC, I just want Honda to win the championship before they go [-o<
Top


And what thread would that be?

Honda is happy with it >>>>> General Honda thread.

The race winner and finally two RBR drivers on the podium. >>>>> Race topic.

Finally after all those years of Mercedes dominance not two Mercedes drivers on the podium. Its about time.
The Power of Honda!
Top

you could have posted 1 pic in each thread
https://t.me/pump_upp
Top 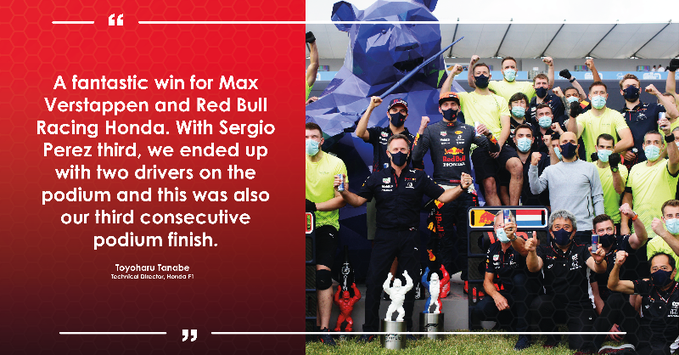 Max won a thrilling French Grand Prix that went to the wire and Sergio made it a double podium, the first for Red Bull Racing this season. It meant that, for the first time since 1991, Honda powered cars have taken three consecutive wins.

A fantastic win for Max Verstappen and Red Bull Racing Honda. With Sergio Perez third, we ended up with two drivers on the podium and this was also our third consecutive podium finish. Max dropped a place from pole after the start, but running a different strategy to Mercedes, combined with a strong car and PU performance saw him retake the lead at the very end of the race with another great overtaking move. Perez ran his own race for most of the afternoon, on a different strategy to his team-mate and again, he was able to gain a place in the closing stages. For Scuderia AlphaTauri Honda, Pierre Gasly delivered another strong performance, to record his fifth consecutive points finish, showing how consistent he is. Having to start from pit lane, with a gearbox change following his qualifying crash, Yuki Tsunoda managed to show his pace, making up several places to finish 13th. The competition was very close all weekend and today’s race was very tough, but all elements of the team did a very good job. It is a very encouraging result for the upcoming races, starting with a double-header, both of them home races for Red Bull in Austria.