Was I the only one who thought that he looked a little bit lost on the podium? Like he didn't know what to do?

This is Tanabe-san, very humble. That's why we love it
Top

Great to see Tanabe-san on the podium!

This is Tanabe-san, very humble. That's why we love it

Don't know much about him, but that makes sense.
Top 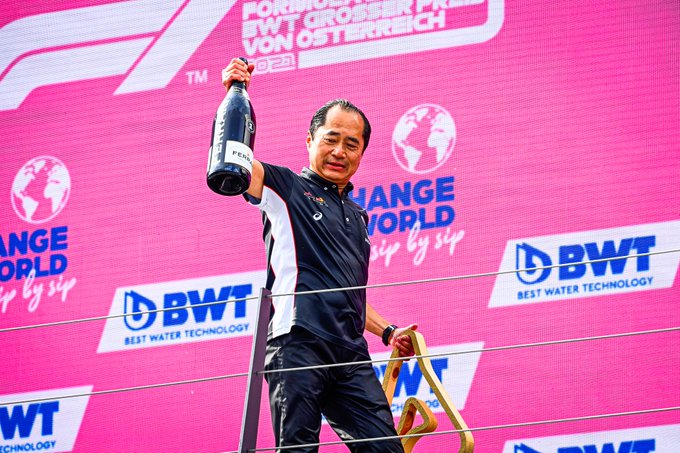 Maybe not too much related to the current engine… But since it is the General Honda Topic… Came around this video and had to share it here… Goosebumps!

Motohashi-san on how the PUs will need to be set up and run for the sprint race weekend:

Because FP1 is the only time where we can try and find suitable settings for the race, our simulations in the factory before coming to the circuit will be crucial,” Motohashi-san says. “Having to decide the power unit settings just after FP1 is something we have never tried, but we are trying to do the simulation as accurately as possible.

“From a reliability point of view, it’ll be tougher than a normal weekend because of the Sprint, which means running the PU in race mode for a longer period of time.

“And while it is not critical nor directly impacting on this weekend, but as we are only allowed a limited number of power units in a year, we will need to take it into consideration when we think of the PU allocation plan for the season.

In the past, we might have used older power unit components during Friday practice and then changed them overnight ahead of qualifying on a Saturday, but the new schedule makes such an approach much harder, with parc ferme starting at the start of qualifying on Friday.

That reduces what we can do as a result of what is learned in FP2 on Saturday, but there is still some value to the extra practice running even after qualifying has taken place.

“There is not much we can do as basically everything has to be set after FP1. It sounds like there’s no value in FP2 as we cannot change any settings after that, but actually both the team and ourselves can try various things there to understand the behaviour of the car and tyres etc in different conditions to FP1, which will be good a reference to consider for the race strategy.” After a run of excellent results in recent races, we now come to the British Grand Prix, traditionally one of the highlights of the season. After two rounds at Red Bull’s own track in Austria, this is another home race, with Silverstone just a short drive from Red Bull Racing’s factory and our own facility in Milton Keynes.

For the first time in the history of Formula 1, we will have a Sprint race on Saturday which will decide the grid for Sunday’s Grand Prix. It means that we at Honda and all the teams effectively have to decide on set-up for PU and chassis, during just the one free practice session on Friday morning, before normal qualifying that same afternoon. This is a great challenge for the engineers and the accuracy of the simulation we have done prior to this weekend will take on even more importance than usual and we are keen to see how well we have prepared for this. This will be a tough weekend from many aspects, but we hope to keep the momentum of the last few races going in this important home weekend for us.

https://honda.racing/f1/post/britain-setup
The Power of Honda!
Top

After FP1 the cars are going in Parc Fermé until after the GP on Sunday.
Hoe is it possible that they can change de PU after FP2? Is this an exception?
I thought only parts that are broken may be changed.
The Power of Honda!
Top

Nine races down in the 2021 Formula 1 season, and Honda-powered cars have a 66% win rate this year, a statistic boosted by five straight wins for Red Bull Racing from Monaco to Austria.

With Max Verstappen taking three wins in a row to lead the drivers’ championship and Red Bull at the top of the constructors’ standings, we thought it would be a good time to find out how Honda F1 Technical Director Toyoharu Tanabe is feeling about the year so far.

“It was a little bit tricky at the beginning of the season, and now we look better than we did in the first races,” Tanabe-san says. “I want to think about how difficult it is to win many races in a row - it requires improving overall performance and doing everything in every race to make everything work correctly. Five consecutive wins is a great result but I want to concentrate on each and every race in the future and the results will follow.” In today’s first ever Formula 1 Sprint Qualifying, a fantastic start from Max saw him go straight into the lead and go on to claim his and Red Bull Racing Honda’s fourth consecutive pole, although this one was of course a bit different to the past three. Unfortunately, Checo lost several places after spinning and in the end the team retired him because it had caused a lot of tyre vibration which was a safety concern. For Scuderia AlphaTauri Honda, both Pierre and Yuki finished where they started in 12th and 16th places and so far, it’s been a difficult weekend for the team. In tomorrow’s race Max will have both Mercedes right behind him on the grid, while the other three Honda drivers are quite a way further back, which means it could be a difficult race for all of them. Having a race today means we have acquired a lot of useful data, relevant for tomorrow’s main Grand Prix and we will be spending the next few hours analysing it all carefully.

Translated from AS-Web. Yamamoto after the race last Sunday at Silverstone.

"I was standing next to Marko when it happened, it was the first lap after the start, so everyone was shocked. The race was already over on the first lap,"

"I hope the power unit is fine. We were running with the second engine of the year. In Hungary we want to drive with the first engine of this season, or with the second. So we pray that the crash hasn't caused any permanent damage", Yamamoto said.

Preferably not a third engine yet

And what if Verstappen's engine turns out to be completely worn out after the tests in Japan? "I don't want to think about that, but if that happens we will have to race with the first power unit or think about the third unit. If that happens, we're bound to have three engines a year, so that will be hard. That's a concern for the championship."