I really like how you incorporated gills on the endplates on both wings.

It is the most innovative and original car of MVRC2020. The enhanced downwash of the sidepods is a solution I tested, but it did not produce big improvements: you must have something special in the rear part of the car to fully take advantage of it.
Matteo
https://www.CAEdevice.net
Top 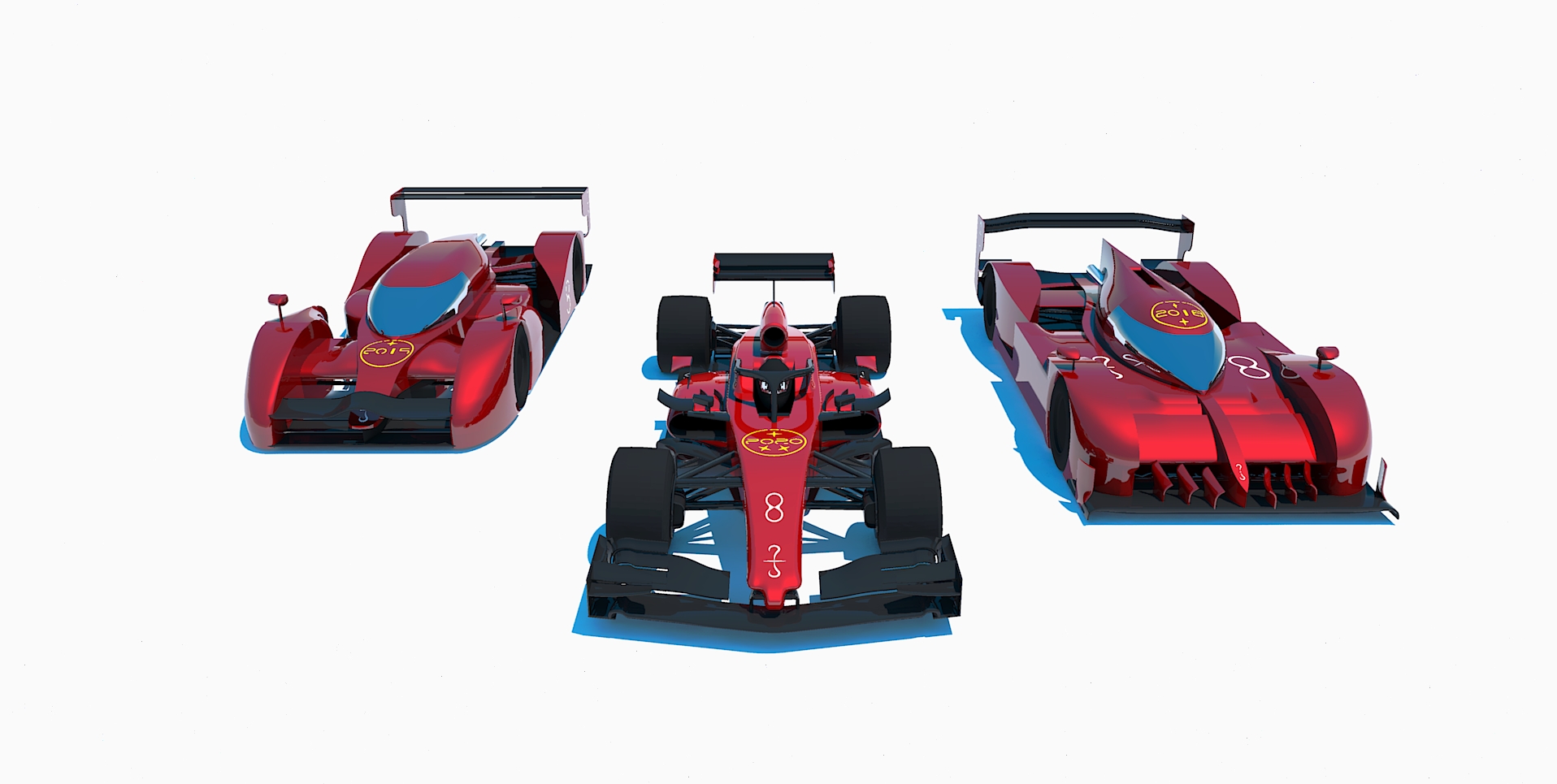 This is a brief technical review to celebrate the car that just won the 2020 Mantium Challenge, a competition of aerodynamic design. It is the third Variante racer to achieve this result.

In 2019, a new set of regulations made the Competition shift from Le Mans inspired cars to Formula1 inspired cars. Not surprisingly, the 2020 car is based on that of the previous year. Extensive bodywork changes, however, meant that the evolutionary design approach was abandoned in favor of a bolder one, which ultimately proved to be quite successful.
Here are the highlights: 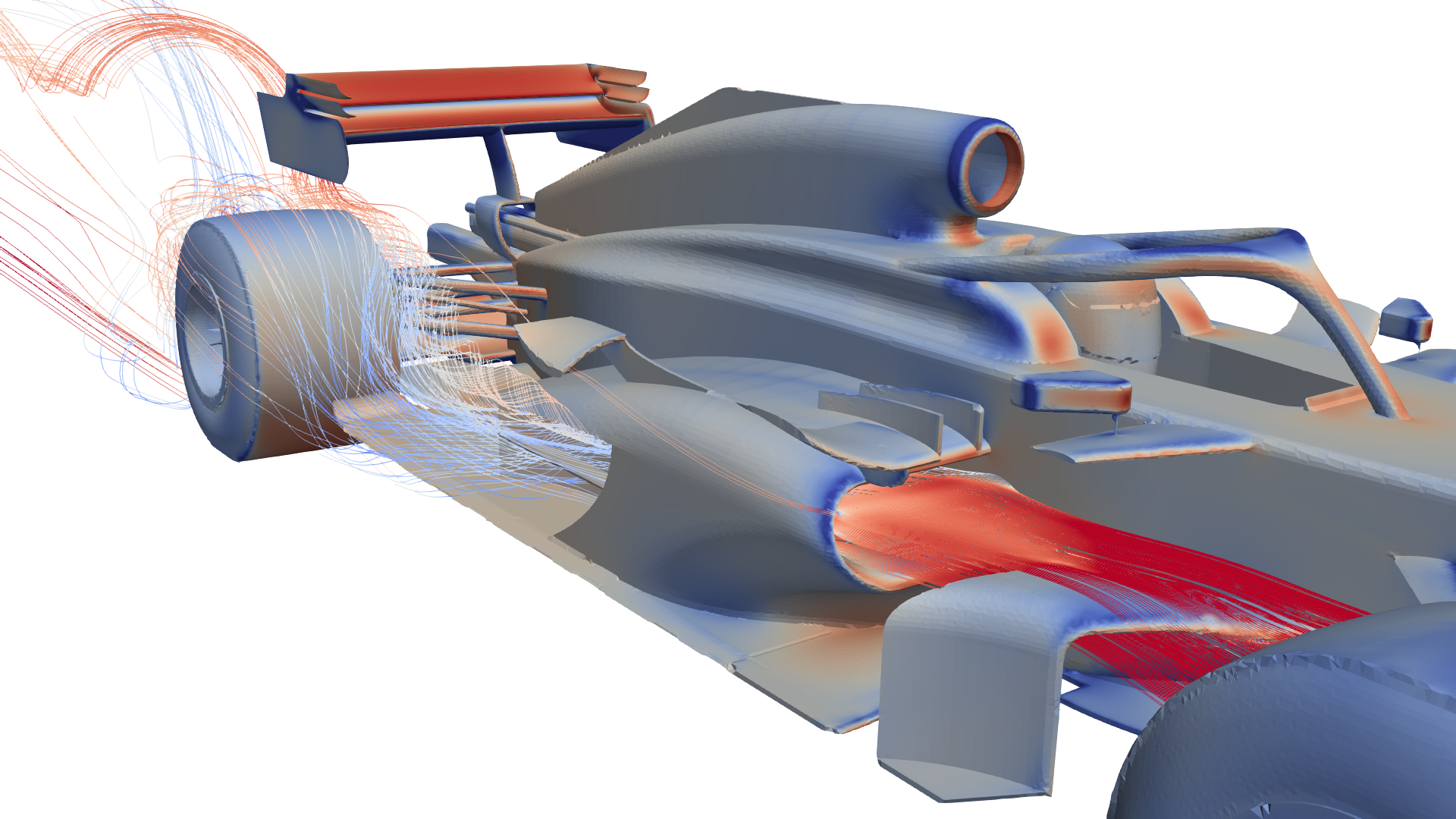 The most predominant feature of the new car are its sidepods (which would be illegal in actual F1!). Their design philosophy revolves around venting radiators exhaust air outboards, while driving fresh and clean air downwards and towards the Rear Wing and Diffuser.

Thus, the scarcely energetic radiators exhaust flows do not interfere with the working surfaces at the rear of the car, and they also shields the rear wheels from coming in contact with fast air streams, which would negatively affect Drag. Another consequence of this oblique flow is a better sealing of the floor.

Meanwhile, the air streams over the top of the sidepods are gently turned downwards, to not only feed the Rear Wing with the cleanest air but also to feed it better flow angles. And since the car has a slotted Diffuser (also not allowed in F1), it is possible to further harvest these energetic flows by channelling the air into those gaps (more on that later). 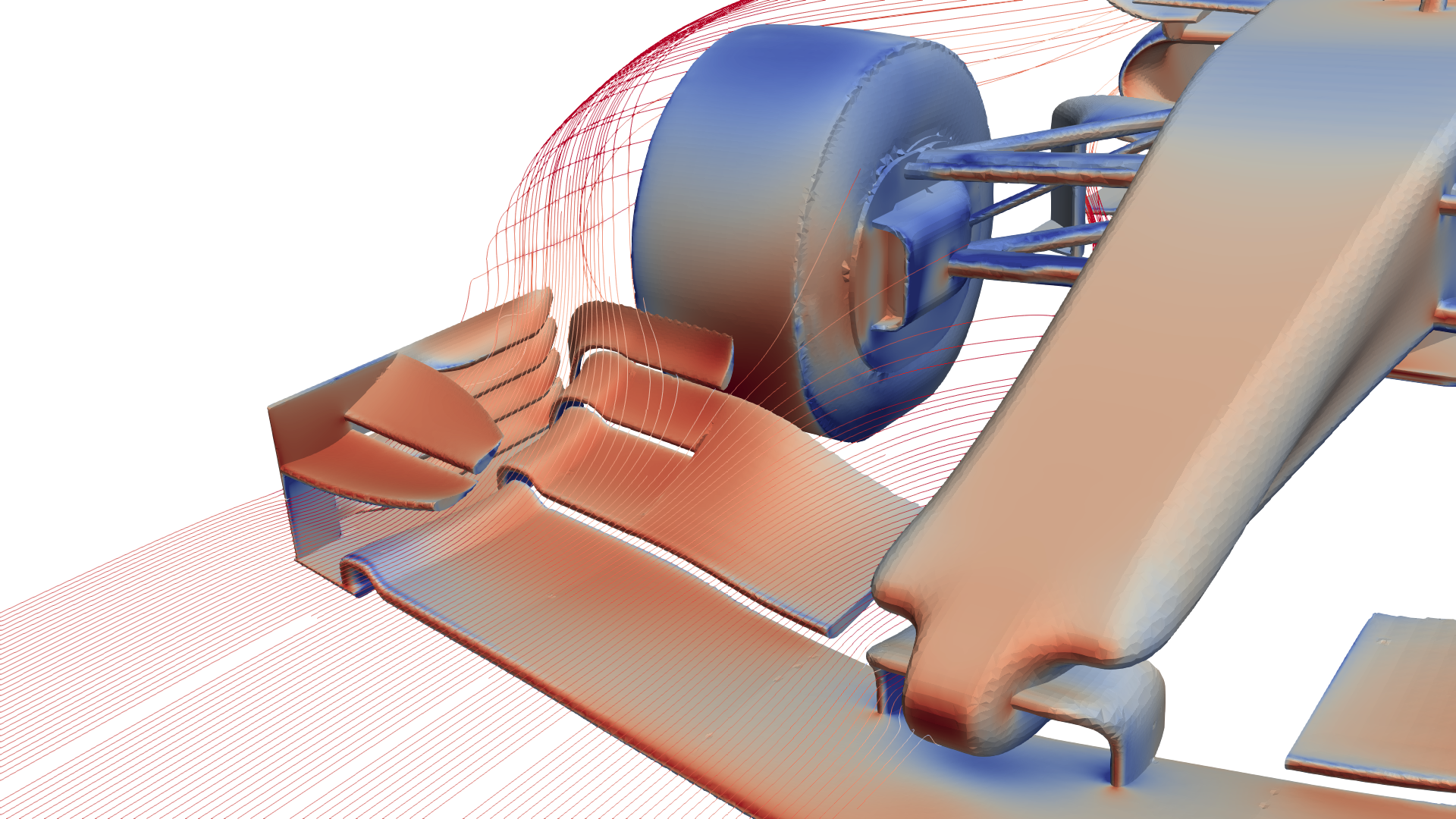 For the sidepods to work properly, an adequate amount of air must be let through the Front Wing, hence why it features a gentle inner section, compensated by an aggressive outer section which also shields the wheels. This configuration naturally encourages outwash.

A peculiar feature introduced with this Front Wing are the Louvres on the Endplate, which virtually enlarge it, besides creating downforce by themselves.

The high rake setup chosen for this car brings the Front Wing closer to the ground, enhancing its Ground Effect and thus allowing for lower AoA for the same downforce, hence less disturbance to some of the working elements downstream.

The airfoils are custom made and organized in an elliptical fashion, and are the only actual heritage carried over from the previous Seasons. 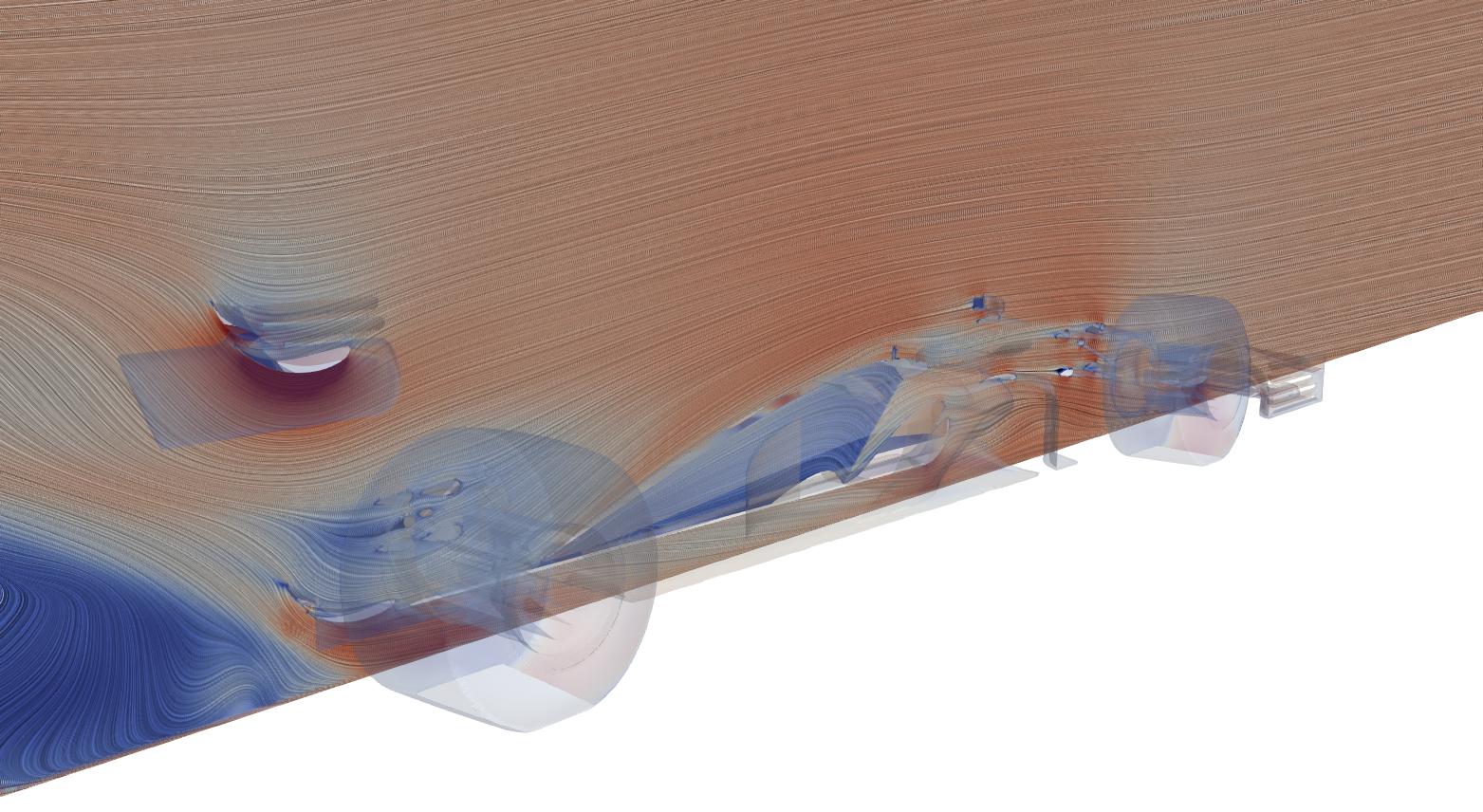 The raked setup of the car has the negative effect of increasing the distance between the Diffuser and the ground. Under this condition, the advantages of a concave diffuser shrink. That is why a more traditional convex diffuser was chosen, which can also make better use of the energetic airflow coming from the top of the Sidepods.

Besides the mentioned elements, dozens more contributed to the performance; probably less innovative or exciting, but equally important and demanding in terms of optimization. The most innovative parts did provide a considerable performance edge, crucial for the achieved results, but the car was hungry for a 360° care, being very delicate and sensitive to changes. In fact, a big upgrade package was introduced in the 4th (out of 5) race and, as promising as it was, it ultimately performed worse due little and yet crucial computational discrepancies between my tests and the official ones. The car still has a big margin for optimizations and a considerable unexpressed potential which, however, has proven to be not very easy to extract.

What do you think about it?
Let me know if you want to see something I haven’t shown yet! Not that I’m willing to show everything, but…
A big thank you to the organizers and to the sponsors! 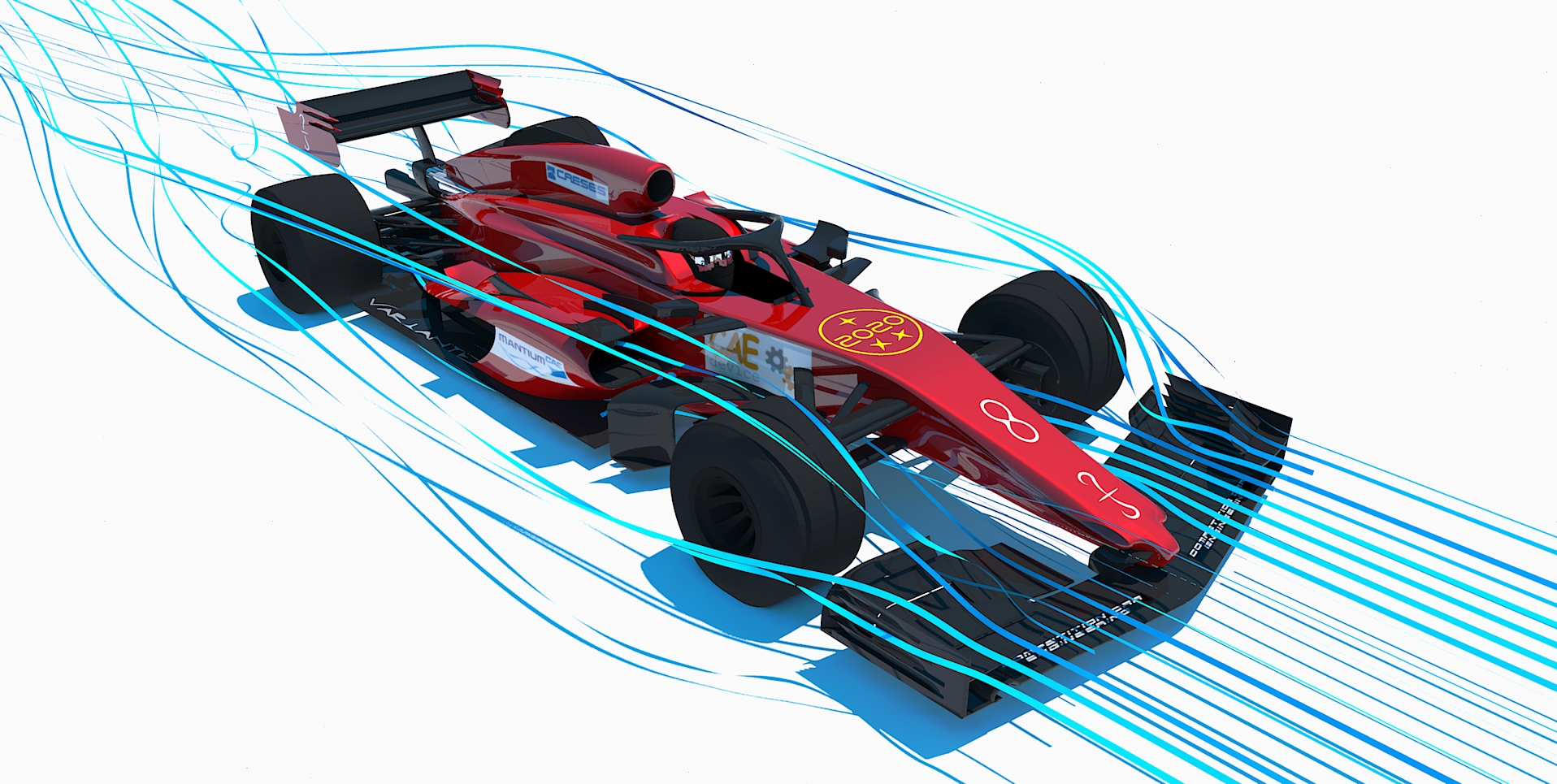 As ever; great insight, many thanks for sharing!
COMPETITION CAR ENGINEERING -Home of VIRTUAL STOPWATCH
Top
34 posts