WT isn't used just for F1, most of the time it'll be rented out.
Top

Right as well. But my statements and links were outlining all the positives of the wind tunnel which clearly IMHO massively outweigh the negative of a possible wind tunnel ban in 2030.

1. How can Mclaren win a championship with the handicap of using an outdated wind tunnel missing refined data while simultaneously slowing you down being in another country? Ricciardo, Seidl and co have clearly stated in multiple interviews we do not think we can fight for the championship with hurdles in place like outdated wind tunnels and infrastructure. It seems nobody at Mclaren really believes they can fight for titles with a missing advanced wind tunnel in house. They all feel the title push will come in 2024 or so when wind tunnel is up to speed. Clearly Seidl, Ricciardo, Brown must all know something based on their constant mention of this key point the last few years.


https://www.planetf1.com/news/lando-nor ... g-mclaren/
"“There’s a lot of things we have coming up, I guess the wind tunnel is one of the biggest,” said Norris, quoted by The Race, referring to a facility McLaren are having constructed."
2. Even Norris re signing 1 of the main reasons he mentioned he was excited for the future is the wind tunnel.

3. Whether Mclaren has 100% wind tunnel time or 15% less etc the difference is they will be able to extract all the refined missing data from it like Mercedes is currently for eg. All teams will suffer wind tunnel time handicaps. No matter what level it is, surely it will be a huge advantage having refined data available regardless of the handicap level though wont it?.

5. The wind tunnel ban is not guaranteed. So calculating 8, 6, and 4 years use is also not guaranteed. The number could be 15 years, 20 years or more for all we know. Teams like Wolf already pushing back i would imagine so would stroll and Mclaren who have shiny new wind tunnels coming will as well. Not to mention Ferrari, Renault and Redbull etc

We are all Mclaren fans here. We all want Mclaren to push for the title. The wind tunnel is a very very very good thing not bad decision or disadvantage for Mclaren. Seidl and James Key who both pushed for the wind tunnel know what they are doing. Have faith! Smile the Mclaren championships will be coming

After you build a WT, its till costs 10 Million a year to run, 10% of that is just electrical costs to run the fan. I get that it takes time to overnight stuff to Cologne Germany but it is a drop in the bucket compared to the amount of time it takes to manufacture those Carbon parts, is it really that big a deal? I threw that out there as a topic of conversation. I don't know what's better...If they're gonna ban WT in favour of CFD, what if they spent that money on getting CFD to work while making use of Cologne until then. Now you're not just catching up to with what everyone else is doing. You're looking towards the future and getting ahead of the game.

1. Did you also calculate the revenue Mclaren could make to offset this and could possibly even turn a profit by renting out the wind tunnel? Mclaren could make back double the $10 million annual running costs you mentioned in revenue and $20 million back renting it to countless customers for all we know as we know how good Zac Brown is at doing deals.

2. Did you calculate the cost of flying staff to Germany all year long to test parts for the next 8 years or so or 15 or 20 years if the wind tunnel ban does not come in effect?

3. Did you calculate what cost Cologne is charging them to use their wind tunnel as if it costs 10 million annually
to run as you mentioned surely the cost will be very expensive to rent as well would it not? I know from life that renting tools or machinery all year long over say 8 year period the costs will most likely end up being much higher than if you bought that machinery yourself in the first place. Renting generally makes sense for very short term financially, not long term generally.

4. Did you calculate the extra profits an advanced wind tunnel that is not missing any "refined data" and how much extra championship revenue $$$ Mclaren could make over the next 8 or so years finishing higher up the championship or even the championship itself ? This could be in the 100s of millions of dollars $$$. Something Mclaren big wigs like Seidl have stated repeatedly cannot be won with big infrastructure deficits like advanced wind tunnels missing.

5. https://www.formula1.com/en/latest/arti ... qlZ9m.html
"with the commissioning of the wind tunnel due to start after the summer of 2023."
Stroll Snr is a billionaire businessman. he has access to the advanced mercedes wind tunnel (not outdated cologne version missing refined data) and local (not having to fly to germany) and is further behind the construction timeline than Mclaren which means he would get less years of use out of it theoretically. Why would stroll snr bother commissioning a wind tunnel in 2023 if there was not some sort of financial benefit that he saw as otherwise he could save some money also could he not, by just using the Mercedes advanced wind tunnel like currently?

I have listed countless positive reason after positive reason of why Mclaren will benefit from an in house latest wind tunnel in my previous replies. But even looking at it from a financial point of view which i appreciate you bringing up i see Mclaren being wayyy better off financially at the end of the day with a wind tunnel then without. After breaking it down the financial benefits are actually 1 of the strongest reasons for a wind tunnel IMHO.


Since 2010 only 2 teams have won the championship. Now there are many reasons for this but consider that both have in house, advanced wind tunnels.

James Key, Andreas Seidl, Zac brown, Norris, Ricciardo and everybody at Mclaren are excited that the wind tunnel will bring huge benefits to Mclaren. And yes as a Mclaren fan i am also very excited and believe they are on the correct path now to championshipo Glory! All Mclarens fans should be smiling right now as the championship is coming 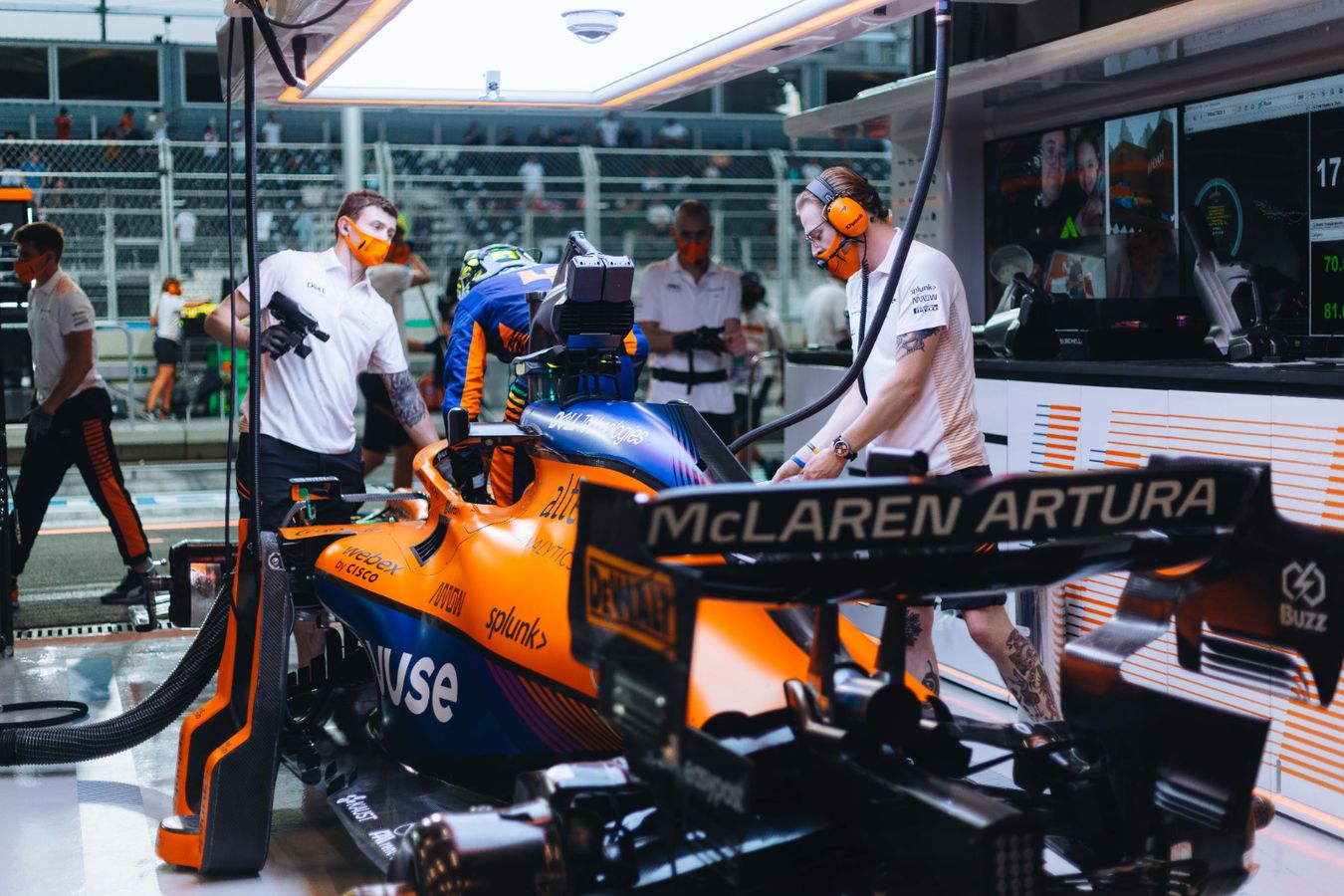 I see everyone else’s Mclaren enthusiasm has gone as well

Apparently the season is too long

You advertise what you can sell to the people and you sell a car easier than chocolate milk to saudis.
If i would get the money to start my own F1 team, i would revive Arrows
Top

I am just focusing on the title fight now.
Top

There is still lots of chatter here about other things McLaren. Maybe just not stuff you're interested in.

It's been a non traditional year from technical chatter point of view, it tailed off early cause the reg changes.

40 is a big chunk of points to overcome in 2 races but we can still cheer on McLaren. Still brings satisfaction the Higher up they finish.
Top

Personally I like to look the glass half full instead of half empty. We beat Ferrari on merit in 3/4 of the championship and the only reason they were able to be in front of Mclaren was due to sheer luck, Daniel's bad start of the season and some kamikaze drivers called Stroll and Bottas. We got a pole position on merit and lost 3 more on only half a tenth and got a victory on merit and missed a second one by sheer luck.
Top

Looking to be in the mix so far in qually. Super tight, grid could be anything at this stage.
Top

It seems that it will be really close… A few tenths will decide it.

But the car seems to have speed!
Top

That was the danger, Daniel out and Lando starting on softs, not ideal.
Top

Daniel once again disappointing not getting into Q3… He will start ahead of Carlos though, but it’s a shame that he couldn’t get the car in… It was a ridiculous small margin though
Top
8092 posts