A place to discuss the characteristics of the cars in Formula One, both current as well as historical. Laptimes, driver worshipping and team chatter does not belong here.
418 posts

Alexgtt wrote:Did they run this new all singing all dancing front wing then? If they did it didn't make too much difference.

Ericcson said he only used it on old tyres.
Top 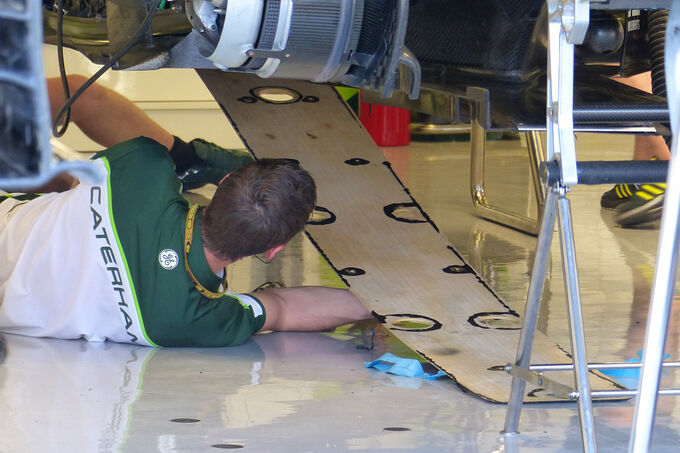 where are all the crowd funding names?
Top

We were robbed!!!
Not driving a Mercedes? Work harder!
Top

multisync wrote:where are all the crowd funding names?

Unless you spent £1k you weren't going to get your name on the car.
Top

theyre on the black 'band' on the side of the cooling inlets, near the floor.

you can see it here

below the NSBO logo on the chequered carbon stroke

multisync wrote:where are all the crowd funding names?

Top of the sidepods

the nose update done a while ago actually could be concidered a 2015-nose.
I'd say Caterham has done every effort to just use every little dime they could find
and every resource to be able to present a 2015-ready car including 2 grid spots.

Whether it'll actually perform is a different story alltogether.
It would interest me to see what would happen if some buyer comes along and hammers in
a mercedes engine.

I'm just glad it seems the Forza Rossa plot seemingly came to a halt after elections cut short
any prospects of a government/politically backed romanian F1 adventure. I'm not that high
on what Tony did to the team, but the way the team was handled [ i'd say its foul play ] with
the eye on shifting it into Forza Rossa in 2015 was a disgrace.

it's sad though that even in this new F1 concept these teams have found no way of catching
up to the established teams. Which really makes me wonder;

what is the general fault behind the fact neither newcomer was able to come even remotely
close to the 'established' field? Was it leadership? Was it money shortage? Was it the personel?

And realistically speaking; what options does this team have for 2015? I think it's clear as day
there will be no Caterham on the 2015 grid, but that doesnt mean the car and grid spots won't
be used for 2015 by a buyer.

IF somebody were so crazy as to buy this debacle....realistically speaking, what to expect from
it for 2015?

Nose will be updated, as i have heard they have been working on the front end quite a bit; new 2015 regulation nose, front wing and suspension set-up as well, the rear end will be the Red Bull/Renault rear end as i hear Christian Horner has been one of the people helping where he can with the survival of Caterham. I will suggest that Gasly and Lynn as FP1/Test drivers for the team whilst competing in GP2 for Gasly and WSR for Lynn next year.

The engine will be the 2014 ICE and ES, but the TC, ERS-K, ERS-H & CE will all be from the 2015 Renault power plant. Down on power to what Red Bull/STR use I'm sure, but it will be reliable and be a good test bed for Renault and for the young drivers.

Ill suggest the Caterham team will be saved, but on a shoestring budget, probably with two or more pay drivers. Maybes Stephens and Mheri in the cars. However, the cars will probably be on the 107% bubble and probably finish 3-4 laps down each race. The real question is if the team would be able to make it to 2016 for me.
Twitter: @ESPImperium
BLOG: http://espimperium.wordpress.com
Top