A place to discuss the characteristics of the cars in Formula One, both current as well as historical. Laptimes, driver worshipping and team chatter does not belong here.
1104 posts

Thank you for reminding me of this monstrosity

But the McLaren nose I no where as ugly/extreme

It actually reminds me more of this 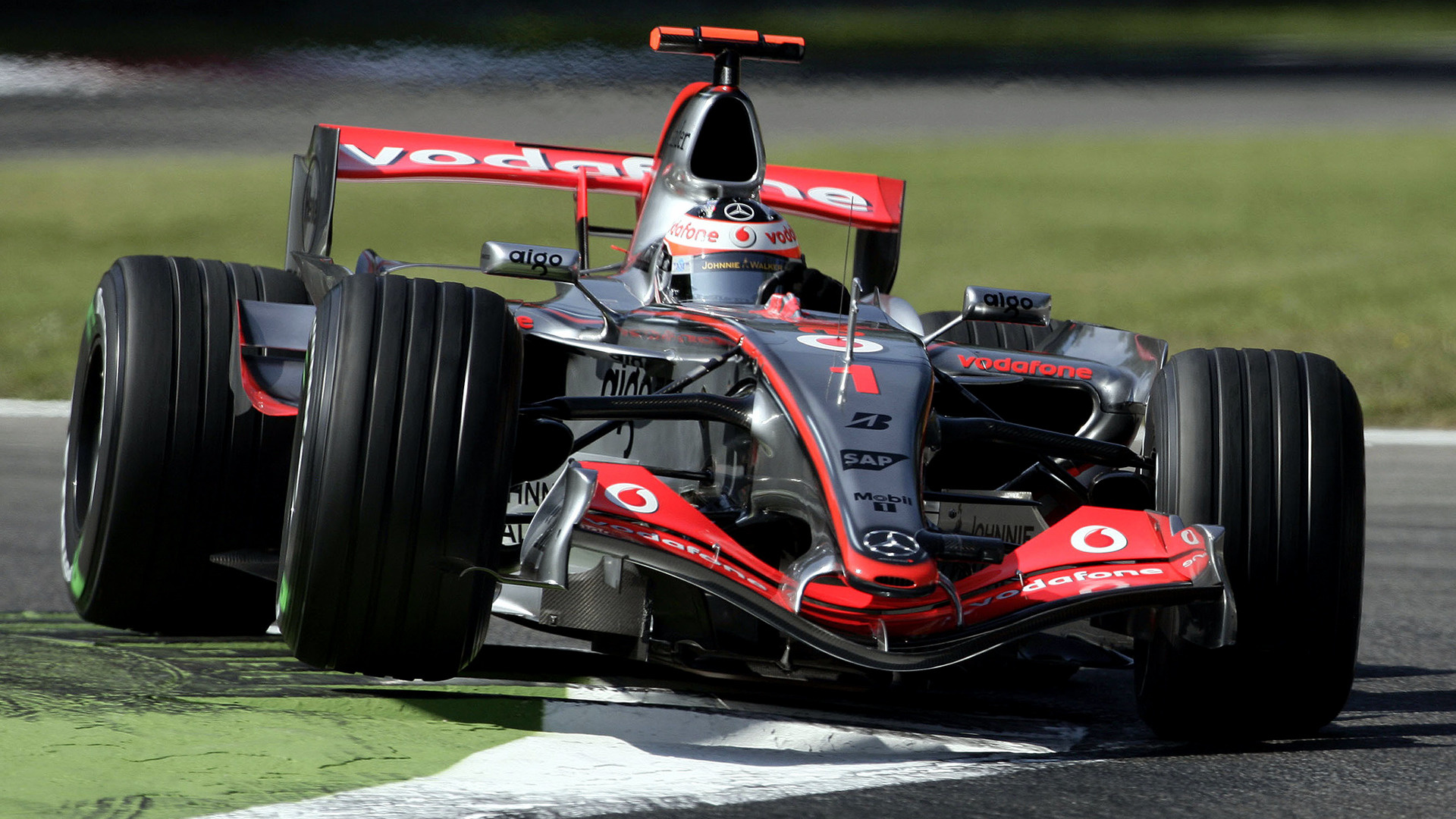 I really like what they've done with this car, they took a very interesting approach to helping airflow to the floor. The huge undercut throughout the chassis, the transmission, the front suspension being nice and high. The cape and nose being slim helps feed much more airflow to the bargeboards, but also the floor.

Perhaps the weakness of the MCL34 was that they couldn't feed enough air to both the diffuser and bargeboards. That although the design was good, the front suspension and nose was interfering with the air mass that could travel through the bargeboards and along the floor. The consequence was either stalling the airflow traveling along the car, or the airflow going directly under the floor. With more airflow, there should be less stalling more front end downforce from the bargeboards, and more airflow going to the diffuser as well.

This along with the revised rear end, possible only by the new extreme transmission McLaren have designed for this year. They have essentially created an undercut across the entire bodywork to help guide air over the diffuser, and the high transmission let's that tunnel start nice and early. It's obvious the Renault engine has higher cooling requirements than both Ferrari, Mercedes and Honda.

I really hope Renault isn't playing games with their car reveal. It could be their cooling requirements are different that what they specified for McLaren. Which would put them at a significant disadvantage, if McLaren still manages to beat them then what?
The height of cultivation is really nothing special. It is merely simplicity; the ability to express the utmost with the minimum. Mr.Lee
Top

Beacuse AlphaTauri released a top-down view of their car, I thought about comparing McLaren with them. And the MCL-35 is much tighter at the mid part of the sidepods. To be honest, I think these are the cars we should compare McLaren to, because these are the cars they were fighting with last year. Hopefully when Renault releases their car they release top-down views as well. I am very interested in seeing that comparison.

the shapes are too different. The toro rosso and red bull designs do not have an undercut, so the base is wider than the top. It gives the illusion that the bulk of the sidepod is wide throughout when it is not. The Toro Rosso could very well be slimmer than the Mclaren at the reference height where you drew your red line.
Not driving a Mercedes? Work harder!
Top

I've seen POU mentioned a few times, what does it stand for please? Something to do with the front suspension geometry perhaps? :s

POU is Pushrod On Upright, it's an offset of the pushrod mounting point on the upright, which has the effect of pulling the front down when turning, making the FW more efficient

I dunno. The engineer inside of me doesn't like subscribing blindly to journalists' theories on matters like these. I am going to make a thread to examine this suspension design. If things get hairy I might be driven to model it.

This way of mounting the push rod is not new I can tell you that!! Mercedes was just more extreme in how far away it is from the upright.
Not driving a Mercedes? Work harder!
Top

What kinematic benefit does high mounted control arms have? You're raising COG, you need to make things stronger to deal with the awkward angles. You're also raising the roll center of the car in the front which tends to induce understeer if higher than the rear. The inverse is also true. Perhaps raising the roll center as much as possible and lowering the COG as much as possible also has the benefit for anti roll.

Perhaps this lets them run softer ARB's or damping for more pitch sensitivity? Or Perhaps more stable front end under cornering which leads to less stalling? Or Perhaps bake some understeer into the chassis because they expect to get more front end bite from both the front wing and bargeboards?
The height of cultivation is really nothing special. It is merely simplicity; the ability to express the utmost with the minimum. Mr.Lee
Top

My guess is that it's not for kinematics but to give an acceptable force base to react the cornering forces. The lower arm is attached at wheel centre height more or less. If you attach the upper arm inside the wheel your force base length will only be 100mm or so.

Btw raising the upper arm won't necessarily increase the roll-centre, nor will a higher roll centre necessarily induce understeer. Both of these effects are a function of the complete suspension kinematics, not just the upper arm.
Not the engineer at Force India
Top

I think a higher upper wishbone is the result of a higher lower wishbone which one is there just to get out of the way of the airstream of the front wing. Overall, mclaren goes more and more in the direction of Mercedes in terms of aerodynamik philosophy. Also noticed, Mercedes style wastegate tubes.
Top 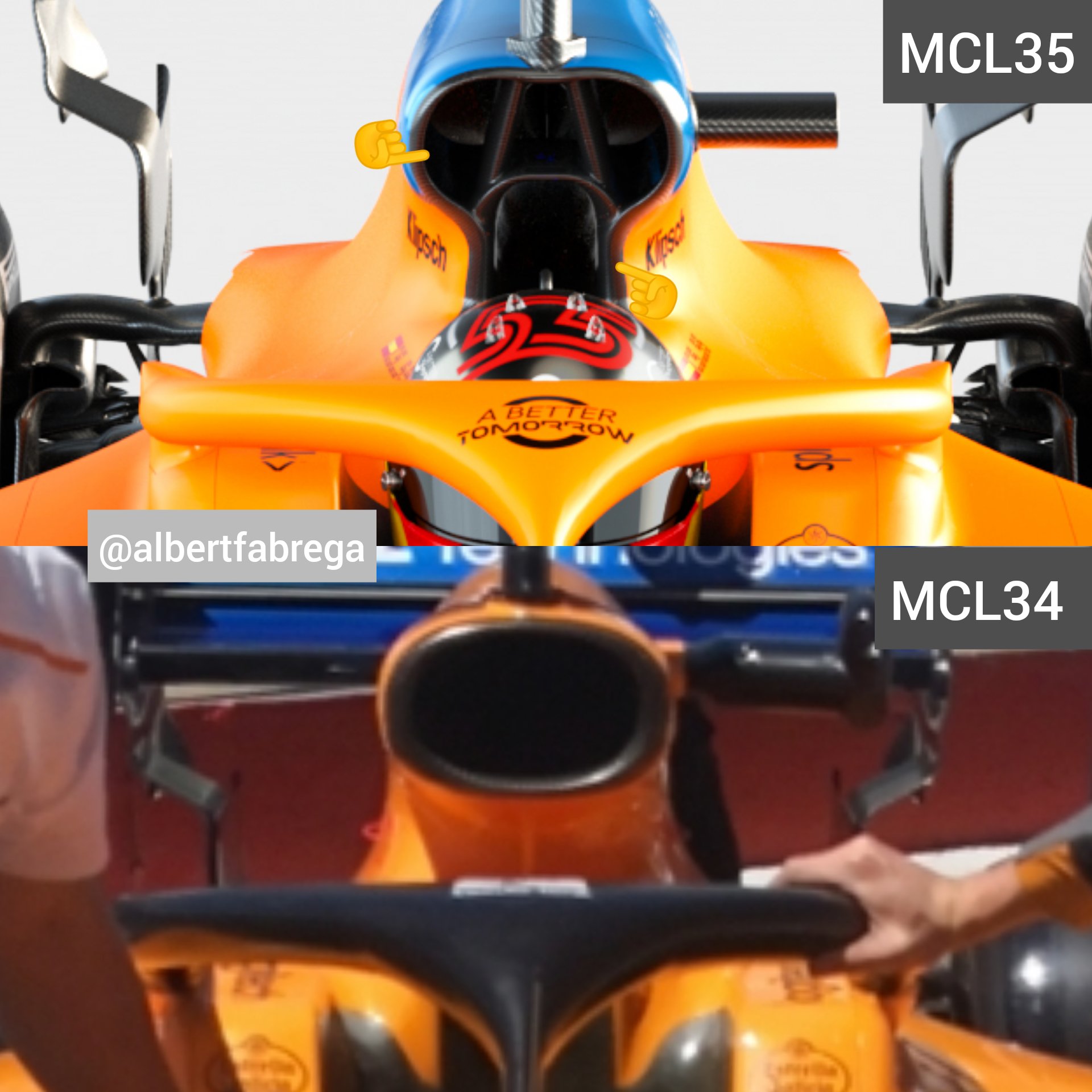 Tim.Wright wrote: ↑
Sat Feb 15, 2020 7:19 am
My guess is that it's not for kinematics but to give an acceptable force base to react the cornering forces. The lower arm is attached at wheel centre height more or less. If you attach the upper arm inside the wheel your force base length will only be 100mm or so.

Btw raising the upper arm won't necessarily increase the roll-centre, nor will a higher roll centre necessarily induce understeer. Both of these effects are a function of the complete suspension kinematics, not just the upper arm.

If you raise both arms roll center does go up?
The height of cultivation is really nothing special. It is merely simplicity; the ability to express the utmost with the minimum. Mr.Lee
Top

if you move them both together without changing their slopes then yes. But you can move the arms up and and change their slope to keep the RC at the same height.

Also, the arms these days are nearly parallel so moving them up and down has very little effect on RC height.
Not the engineer at Force India
Top

f1rules wrote: ↑
Thu Feb 13, 2020 10:44 pm
question, i dont know the rules, and i know carb fib are layered with different patterns, but this almost look like a glue on, any risk we will se a gigantic vacuum nose

Good find! That's definitely a glue on replacement. Either the real tip was damaged or they're hiding something. Given how sophisticated they were in this area last year, I'm guessing the latter. The nose tip is there however only to satisfy the regulations, so perhaps the tip isn't an important part of the crash structure.

If we go back to the memory lane, in 2014 mechanics broke off the tip of Buttons car during the pitstop in Australia. 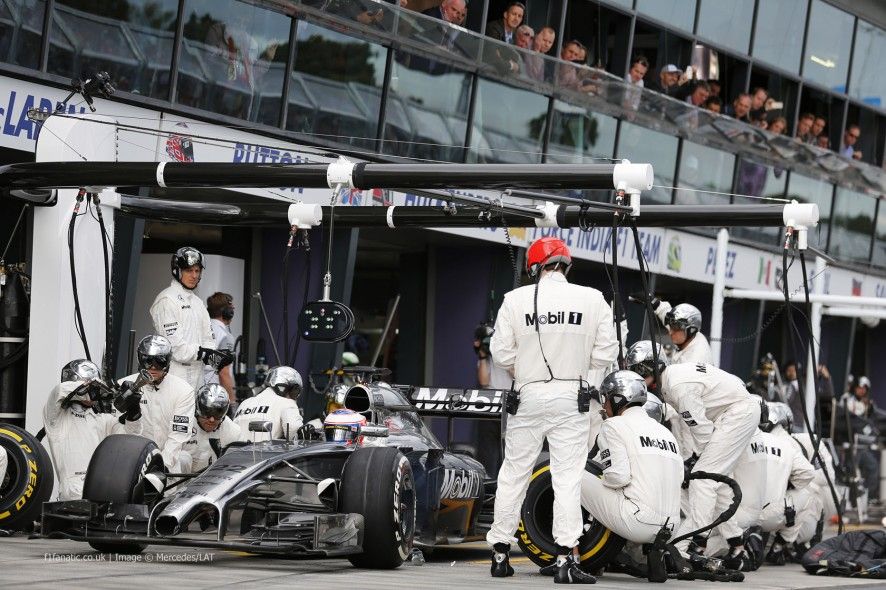 If i would get the money to start my own F1 team, i would revive Arrows
Top

Hello Daniel. Thank you very much for your words. The numbers tell us that much better than the MCL34, so hopeful that it is a good base with which to be able to go on giving enough war.
Top

lots of open space at the back and with the raised lower wishbones, a lot of air should flow over the diffuser 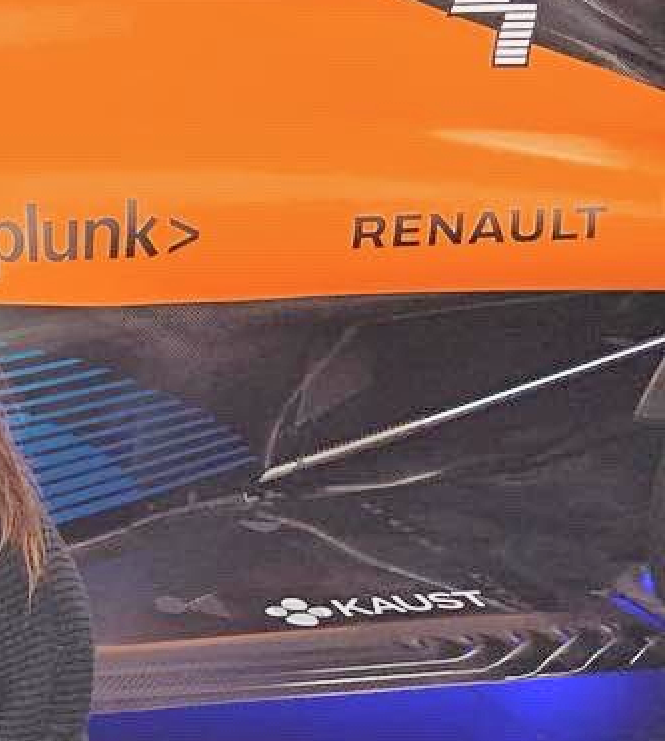