Force India showed up in winter testing with a VJM11 car that looked very similar to its predecessor. Underneath, it really is a new car, but the limited number of changes did show that Force India may no longer be the leader of the midfield.

This forum contains threads to discuss teams themselves. Anything not technical about the cars, including restructuring, performances etc belongs here.
419 posts

Destroyed.... in qualifying.... like that’s a thing, you either destroy your partner or not, and the points is what counts.
Top

I am actually impressed with one talent of Stroll i.e. to overtake car on 1st lap of the race.
Stroll can out-qualify checo but out scoring will be near impossibly, checo is master of tyre management he knows how to maintain the pace and position during race.
I am a fan of Ocon but I admit that he still struggles with racing craft and can't overtake cars or defend against rivals during race, not to forget tyre management.

I am afraid to say this, but he could be another Hulkenberg in F1.
Top

Haas is correct by the letter of the law. New-FI does not have the IP to the cars they are running. Old-FI owns that and commercial agreements prevent this from being transferred in bankruptcy court (or whatever it's called in non-U.S. places).

All the powers that be (Most other teams, the engine manufacturers, FOM, FIA) decided to give new-FI the prize money. It's essentially impossible to overcome decisions by traditional power-structures, and this is why they are the traditional power structures.

Haas probably started out by asking new-FI for a payment equal to what they would have gotten if the old-FI prize money was distributed to other teams according to letter of the law. $60 million per season in old-FI prize money divided by ~ 10 teams is obviously $6 million per team, so Haas presumably asked new-FI for cash payment of $6 million for the next 2 or 3 seasons. This was a pretty reasonable request, or at least a practical request, and new-FI said no.

But then Haas were left with lousy next-best alternatives (which new-FI undoubtedly understood well). Haas can't go to FOM and ask for a decision. The only "court" or "judge" in this case is the FIA, and Haas can't petition the FIA to force a payment from FI. Instead Haas can only petition the FIA on issues of FI car legality. So this left Haas with one alternative: Ask the FIA to declare both new-FI cars illegal due to the IP issues and exclude them from the race. This would also logically lead to new-FI losing Column 1 prize money for the next 2 or 3 seasons, an impact of multi $100 millions. This is a huge and radical request, even when the original underlying issues are clear.

So Haas are effectively asking the FIA to-
1). Declare the FIA's own judgement in error when it supported the mid-season creation of new-FI, and
2). Take the draconian step of excluding new-FI from this race and really the entire 2018 championship due to a paperwork issue.

The FIA stewards at any given race are theoretically independent, and in argy-bargy sporting matters (penalties for collisions, etc.) this is probably true. However, when it comes to big-picture political/power matters, the stewards are probably not really very independent. This is a guess based on the likelihood of three stewards in a little office at a racetrack telling the FIA what the FIA can and can't do regarding multi-$100million decisions.

The stewards have delayed a decision for at least 24 hours. I suspect Haas has already presented all paperwork necessary for a quick and accurate decision. I suspect the stewards are delaying a decision to feel out the FIA and its wants, especially any FIA feedback on practical approaches to steward strategy for denying the Haas petition and the necessary wording to accomplish this. There will likely be a Haas appeal to the FIA itself, and the wording of the initial steward rejection will be crucial to framing the issues and debate for any subsequent appeal.

I don't see any reason to bet against the unified F1 power structures, even though I basically sympathize with Haas. If F1 was transparent and fair then everyone would have an F1 team.
Top

- Come on, I'm not siding with Haas for the sake of it but FI situation is an open scam that can only work in bizarro F1 cheating world.
- It's a textbook eat a cake and have a cake scenario. Something can't be old to keep the money and new to escape from creditors

.
- Whatever, they already got a slap on the wrist with a hook, line and sinker DSQ penalty. Only in Formula 1

Haas already got what they wanted out of this protest: The stewards declared unequivocally that RPFI is a completely new team.

Next step is a civil lawsuit against the FOM using the stewards verdict as basis for their claim. Forget this protest, it means nothing anymore. Even Gunther Steiner has said on record that this is all about money.

The FOM pulled a completely amateur move by giving Force India the prize money. Now they backed themselves into a corner. They either don't pay Force India and Haas and risk possibly putting Force India in another crisis, or they pay both and take a massive financial hit. Either way, they come out of it looking like complete morons.

Add one more to the list of things that wouldn't have happened under Bernie.
Top

As several commentators pointed out, RP Force India may have won the battle, but LibertyF1 may be about to lose the war. The verdict of the stewards gives Haas a big opening to file a claim against Liberty and FOM for Column 1 money for 2 previous years.
A bigger picture reality that people are not talking about is the extent to which F1 has been a closed society for 15+ years. No truly new team that entered since 2001 has survived. Toyota, HRT, Caterham, Marussia/Manor - all gone. Haas is the only surviving team. If Haas decides to leave, Liberty will have little chance of attracting any new entrant. They will look at how Haas seemingly got shafted over Column 1 prize money and say "No Hell No".
Liberty has to decide soon whether they can continue with the current F1 governance model, or blow it up and start over. They may have to blow it up to save F1.
Top

Personally I see it as EITHER:

- RPFI claim they bought the intellectual property as part of the purchase of assets from the old team. This must then class RPFI as a genuinely brand new team (“existing” teams should not be allowed to do this but new teams have done this in the past replacing existing teams; Jordan to Force India is an example of this) and therefore should not be due column 1 prize money as Haas weren’t when they were a new team.

- RPFI claim that they are a continuation of the original FI but then must accept that they have used intellectual property from a team other than themselves. This is surely then a breach of sporting regulations (McLaren spygate, anyone?) and a punishment must be applied as such ether by the FIA or in court/settlement as a civil matter.

I’m a big fan of FI/RPFI and don’t look particularly favourably on the Haas ‘Ferrari-lite’ set-up but I totally understand why Haas have an issue with what’s gone on. The new owners (Stroll, et al) are trying to have their cake and eat it which, surely, can’t be fair?

Say, for example, in a few years time a big team with huge financial backing takes a nose-dive much like Honda did just before they pulled out of the sport in 2008 and find themselves near the back of the grid. Imagine an “independent” team strikes gold with a great design package at around the same time which will set them up well for a good few years; what is to stop a big team like Mercedes/Ferrari just buying that team, taking their design mid-season and taking the continued glory for themselves?
Top

But the issue really is RPFI is using a different license than FI so they are a new team, period. Regardless of the IP they should have to follow the same rules as Haas. Haas probably felt the IP issue was easier to prove but the transcripts sort of show they're pushing both claims.
Top 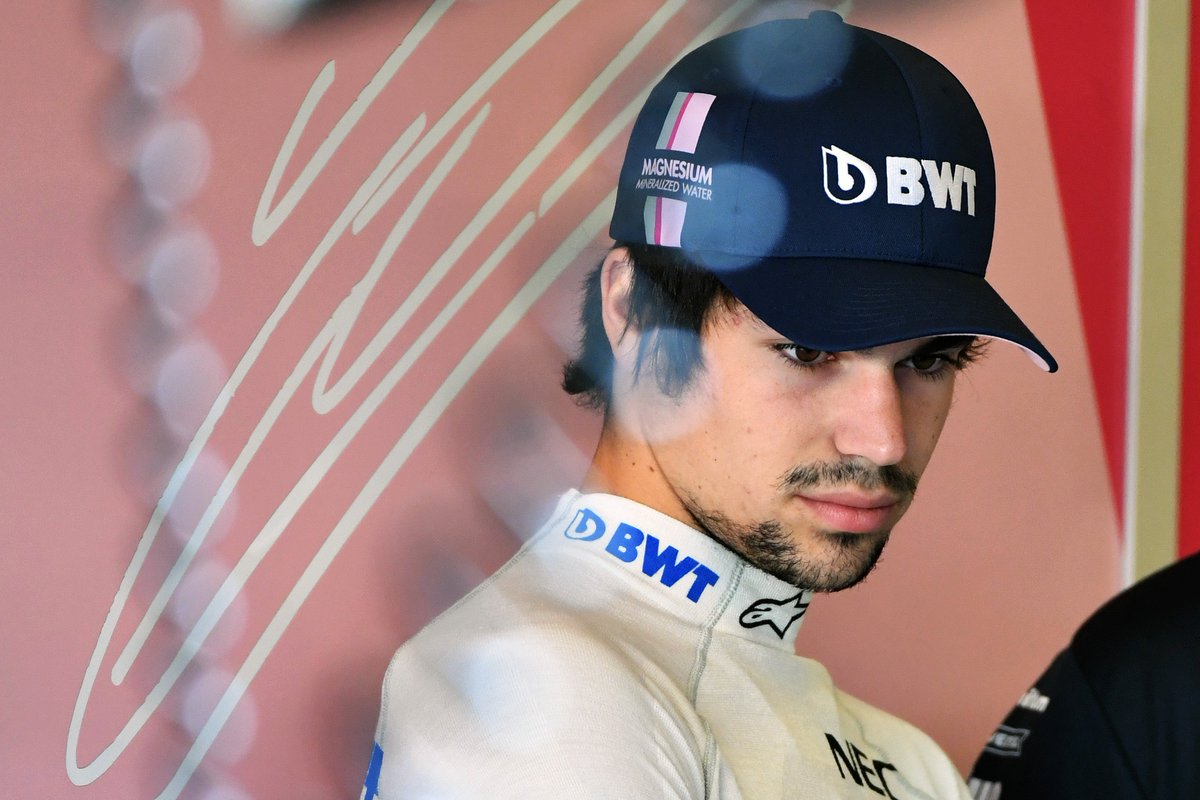 Did FI ever make any announcement about Lance being a driver for 2019? They only announced Perez if I remember correctly. First time ever that an F1 team does not want to announce both of their drivers?

It's the opposite end of the spectrum from Sauber when Kaltenborn announced 3 drivers...
Top

bill shoe wrote: ↑
Tue Nov 27, 2018 11:22 pm
Did FI ever make any announcement about Lance being a driver for 2019? They only announced Perez if I remember correctly. First time ever that an F1 team does not want to announce both of their drivers?

It's the opposite end of the spectrum from Sauber when Kaltenborn announced 3 drivers...

That pretty much confirms that Haas already got what they wanted out of the verdict.

GUYS, you're NOT gonna believe this!