Flow viz residue is the first thing that came to my mind. It could also be abrasive material as you say or, as Somers has pointed out:


These alleged scuff marks may point to the main wing element not being rigid and instead flexing up and down, although they could be something totally unrelated like emulsification caused by a dirty air flow.

All in all, this just seems like a desperate effort by the RBR camp to spread disinformation in an attempt to destabilise Lewis and Merc. So far it's been a failure.
Top

rifrafs2kees wrote: ↑
Mon Nov 22, 2021 2:39 am
Different subject here, W12 starts. Could the nonlinear heave spring, which allows the rear to squat as downforce increases impact traction off the line? Anecdotally, the Rbs seam to have better starts. Wondering why.
One theory that comes to mind is that rearward weight transfer associated with starts coupled with a "regressive" spring rate at the break over point might impact traction...

they could be called front common mode springs and rear common mode springs
heave is the 'vertical' motion common to the whole unsprung vehicle
a heave spring presumably would likely exist only if the front and rear suspensions were somewhat interconnected ?
Top

The cars have 1000hp and about 650 foot pounds of torque yet they only weigh about 840kg off the line.

The rear tyres are also relatively low pressure and very soft at thw start of the race.

The suspension setting shouldn't affect the wheelspin much at all versus the influence of 650 foot pounds of torque on such a light chassi and soft tyres. It's more the clutch release and the track surface.

Also remember that the suspension doesnt activate until after very high vertical loads only seen when driving at high speed.
🖐️✌️☝️👀👌

And preempting the arguments about angles. That static shot should be a less favorable angle because it's from a higher position which should show the slot gap slightly more.

Just registered an account to see what you think. I may be over-exaggerating though

According to Bottas, Mercedes have recently discovered a new way of setup the car which is gaining performance in hi speed corners.

Here's 2 decently similar angles from high speed and stood still. Need to find something a bit sharper and a higher speed though.

I can see through the gap on both images, if you look at the center you can see the twin supports in both images. The difference you are seeing could be partly down to the contrast of the image, the bottom image has a much higher contrast.
Top

levidrugi wrote: ↑
Mon Nov 22, 2021 5:55 pm
Just registered an account to see what you think. I may be over-exaggerating though

If anything, this probably just proves that it is in fact a registration mark from when the wing was fitted in a different configuration. It lines up perfectly. If it was moving like that we would be seeing it from the front.
Top

levidrugi wrote: ↑
Mon Nov 22, 2021 5:55 pm
Just registered an account to see what you think. I may be over-exaggerating though

If anything, this probably just proves that it is in fact a registration mark from when the wing was fitted in a different configuration. It lines up perfectly. If it was moving like that we would be seeing it from the front.

Exactly. Thats what I suspected too. It was pretty obvious to anyone who doesn't have some bias skepticism that it would be impractical to sugges the carbon could flex in such a way to follow those 'marks' without leaving obvious stress marks along the main plane wing where it bends, and I think it would likely fail a test if it did what they think it does.
Top

I can't see the difference between Sochi and Qatar on the floor detail here? 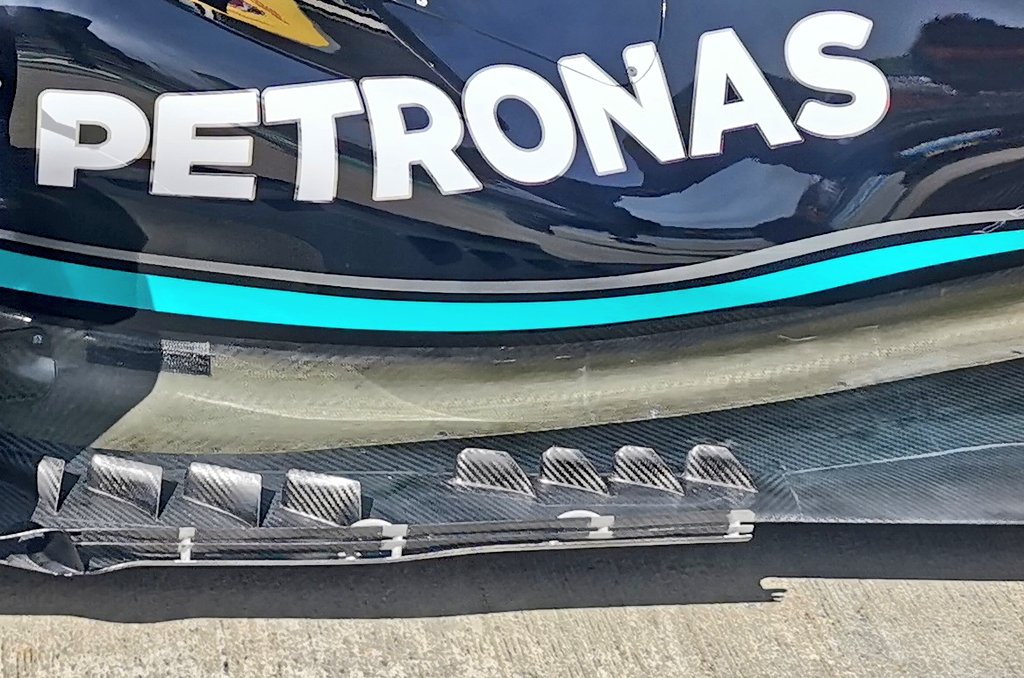 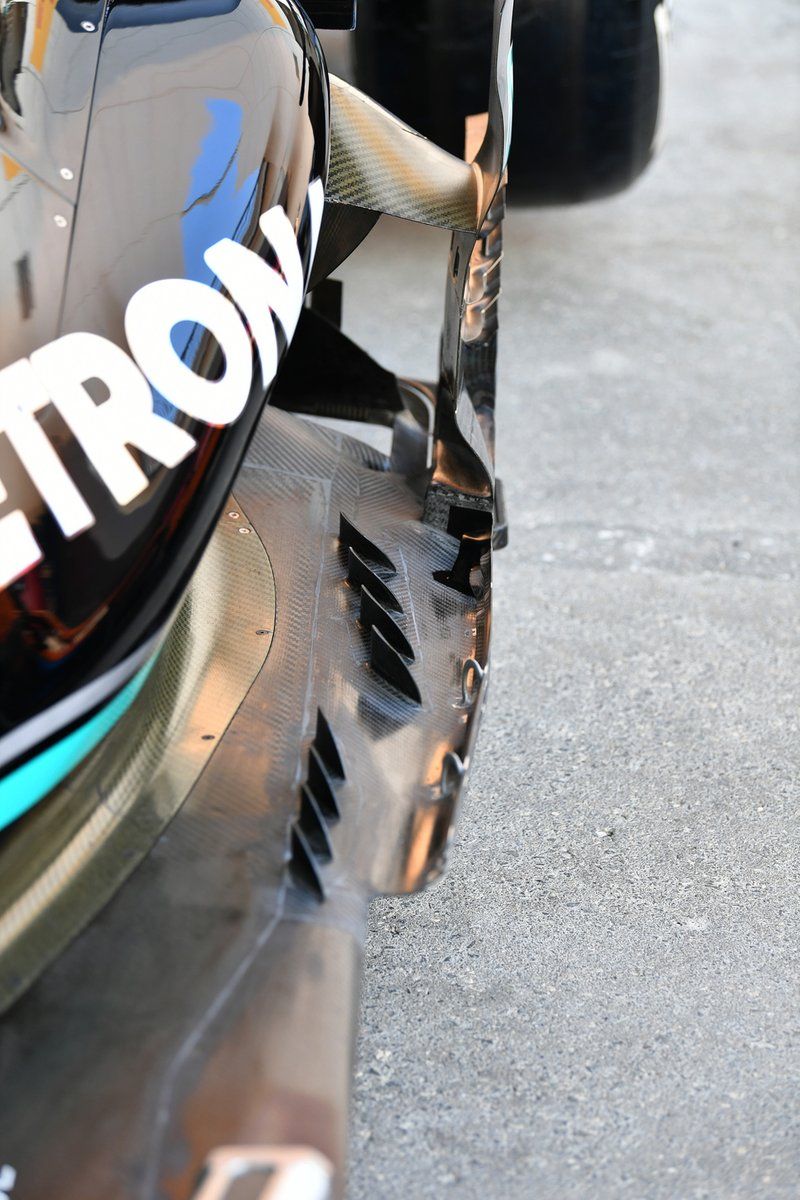 RZS10 wrote: ↑
Fri Nov 19, 2021 8:56 pm
Would something like this even be feasible from a carbon/material standpoint?
https://i.imgur.com/mVFwkFC.gif

Bit late to this party, but yes it would be plausible. While your image is hugely exaggerated, there definitely is the possibility of elasticity.

An example that is not that far from home is the Toyota TS-040 at the 2014 24h of Le Mans, this is to believed that there was some form of elasticity in the pieces behind the rear wheels, which enabled the whole wing to pivot.

These cars already had their 'flexi' wings, and 'bendy' wings, which all rely on elasticity of some sort.
"Bite my shiny metal ass" - Bender
Top

The image shows how far it would have to bend back in order to create the "scratches" - i posed it as a question but i believe it wouldn't really be doable to that excess + it would be easily noticeable in the rear view onboard.

edit: I should maybe elaborate.
This is towards the end of the straight during the overtake on Max with DRS open vs. closed & already cornering.
There's a continuous curvature (indicated in red) - the white lines, which are the edges, essentially line up between both shots.

It's a bit of a guess but the wing would have to bend a LOT at the height of the white dot, roughly half height between lowest point and the DRS flap.

It's a bit blurry unfortunately, that's from youtube 1080p, there's probably also some footage from another race with the sun shining onto the wing beautifully, making it easier to see that edge.
Last edited by RZS10 on Mon Nov 22, 2021 11:18 pm, edited 1 time in total.
Top

Look at the shape of the VGs, noting that the direction of air flow is not the same in both images.
Turbo says "Dumpster sounds so much more classy. It's the diamond of the cesspools." oh, and "The Dutch fans are drunk. Maybe"
Top

Look at the shape of the VGs, noting that the direction of air flow is not the same in both images.

I don't see it. The position etc all looks the asme to me. the angle of the photo is the only thing that makes the shapes of those little 'sticky-upy' bits look a little different.. perhaps if someone could draw on these to show a blind man what hes not seeing.. lol
Top

Direction of the airflow is the same? (arrow points to front of the car)

Judging by an image (inlay) from this post there's no difference to the shape either.
Top
1436 posts