But they said he lost 4 tenths because of the damage..
Top

Tvetovnato wrote: ↑
Wed Dec 08, 2021 5:53 am
I wouldn’t be shocked if Merc actually takes another engine for Hamilton this weekend. A grid drop means no risk whatsoever of Max crashing him into T1, and then he has only a few laps to be up behind him again with a definite faster car.

But you'd still have to overtake him.

Better protocol would be qualify on the front row, ahead of him, and sail off into the distance (ideally with Bottas as a buffer).

This will only be the third race for this ICE.

(On a side note, I think this discussion may be a better fit for the team thread.)

Ideally yes. But if a front row lockout seems unlikely, they might give it a go. He will have to overtake yes, but then he can save that for a place where Max cannot do any damage, like sail past on a straight.

But yeah, more of a team thread discussion, sorry mods

I have a question - could the damaged front wing actually have improved the car's performance?

We know that wings create vortices at their tips and that these vortices reduce the lift force - that's why endplates are added: to reduce the vortex. But we also know that the front wing can be used to create a vortex that helps to redirect the front tyre wake and thus reduce the wake's adverse affect on the car - specifically the floor. The endplates incorporate vortex generators so far as the rules allow, after all.

By removing some of the endplate - especially in the shape seen there - perhaps a beneficial vortex formed that actually improved the overall performance of the car.

Just a finger in the air thought, really.

We'll know for sure if the Mercedes turn up with both cars having kicked in/sawn off FW endplates for FP1!

But it is an interesting thinking point. If some damage to a car in theory could somehow unlock performance which was prohibited by the current design regs. I wonder if this has ever been considered by the engineers of any team?

I was at Silverstone once, F3 was one of the feature races one driver (Warren Hughes, I think), had an amazing race! Having been hit by someone in the very early laps, he came through the field finishing near the top three. He got disqualified, as his engine plenum was damaged in the contact. When the car finished the race, it was outside of the rules.

Think back to Brazil, LH started qualifying with a legal wing (as far as we are aware), finished it with an illegal one (only slightly, but…); should the same/similar thing happen in a race, the result would be the same. Surely?
The more that I learn, the more I appreciate how much more there is to know….
Top

I have a question - could the damaged front wing actually have improved the car's performance?

Shovlin reported that after the final contact with Max, the damaged end plate cost Lewis about 4 tenths of a second per lap.
Top

The medium-downforce rear wing with single pylon support is back (with gurney flap): 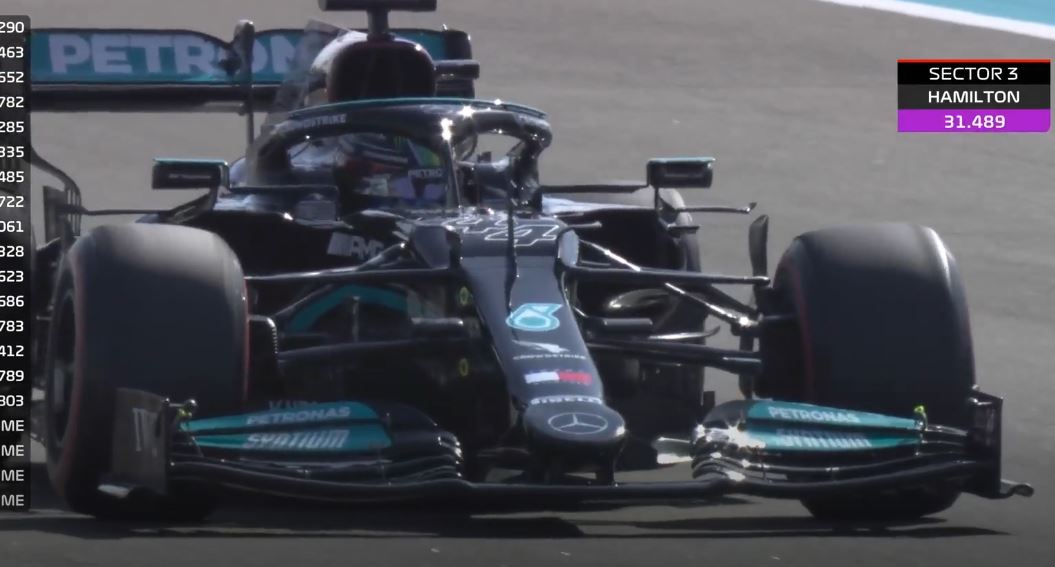 wow so allison was playing us all along. He did say its going to be quite apparent. So the apparent turned out to be that there was no change at all lol

will this end up to be the wdc/wcc strat and ultimate 2022+ gambit... stay tuned
Top

Huh, is that allowed, not spending tokens and saving them up for 2022.
So they have 4 tokens then for 2022?
Mercedes AMG + Hamilton => dreamteam!
If you can't beat'em, call Masi!
Top

Considering how different the 2022 rules are, I don't believe tokens are actually a thing for that season.
"Bite my shiny metal ass" - Bender
Top

But with cost cap, they could develop a change in car which is only useful for 2022 car in 2021. Hence in effect getting extra indirect budget for 2022
Top

I guess I should clarify... they spent little on 2021 development including tokens so they could maximise development for 2022. Tokens not included

I wonder what the abortted nose couldve looked like. Any insider speculation?
Top

Aero development for the 2022 car—wind tunnel testing was suspended from 2020 to Feb. ‘21—was limited last year and since a car design is primarily based on the aero platform, hard to understand why they couldn’t dedicate more time to the ‘21 car.
Top