Hopefully it's also lighter along with its lower CoG.

No undercut is a surprise (to me). I assume that there's more benefit in the airflow control vs the extra floor exposure.
- Axle
Top

Don't suppose anyone has images of the t-tray? Would be cool if they had the double copied also.

Nice unobstructed view of some floor detail of the new Williams specification: 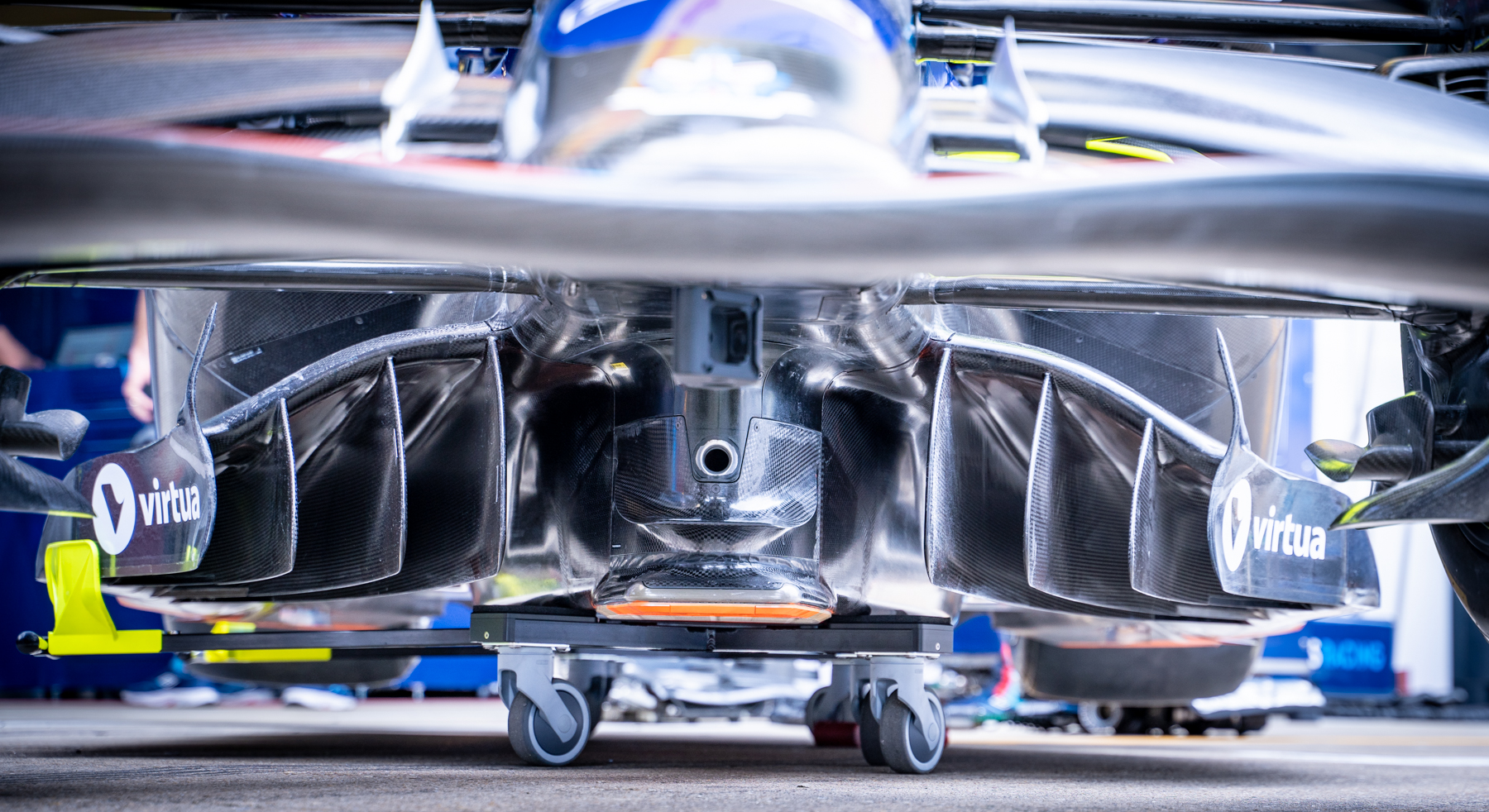 Their strakes outwash much the same as other teams: smooth continuous curve. Double t-tray visible. Couldn't see it from other angles but rather extreme curvature on the most outboard bargeboard-like strake - seems like the lower portion of it outwashes with a concave surface (much the same way as launch spec W13's sidepods) and the vertical extension is bent inwards - fine-tuning the tyre wake management. Has a sharp trailing edge, much the same as Red Bull's outboard not-a-bargeboard strakes, presumably for vortex shedding to help tyre wake management 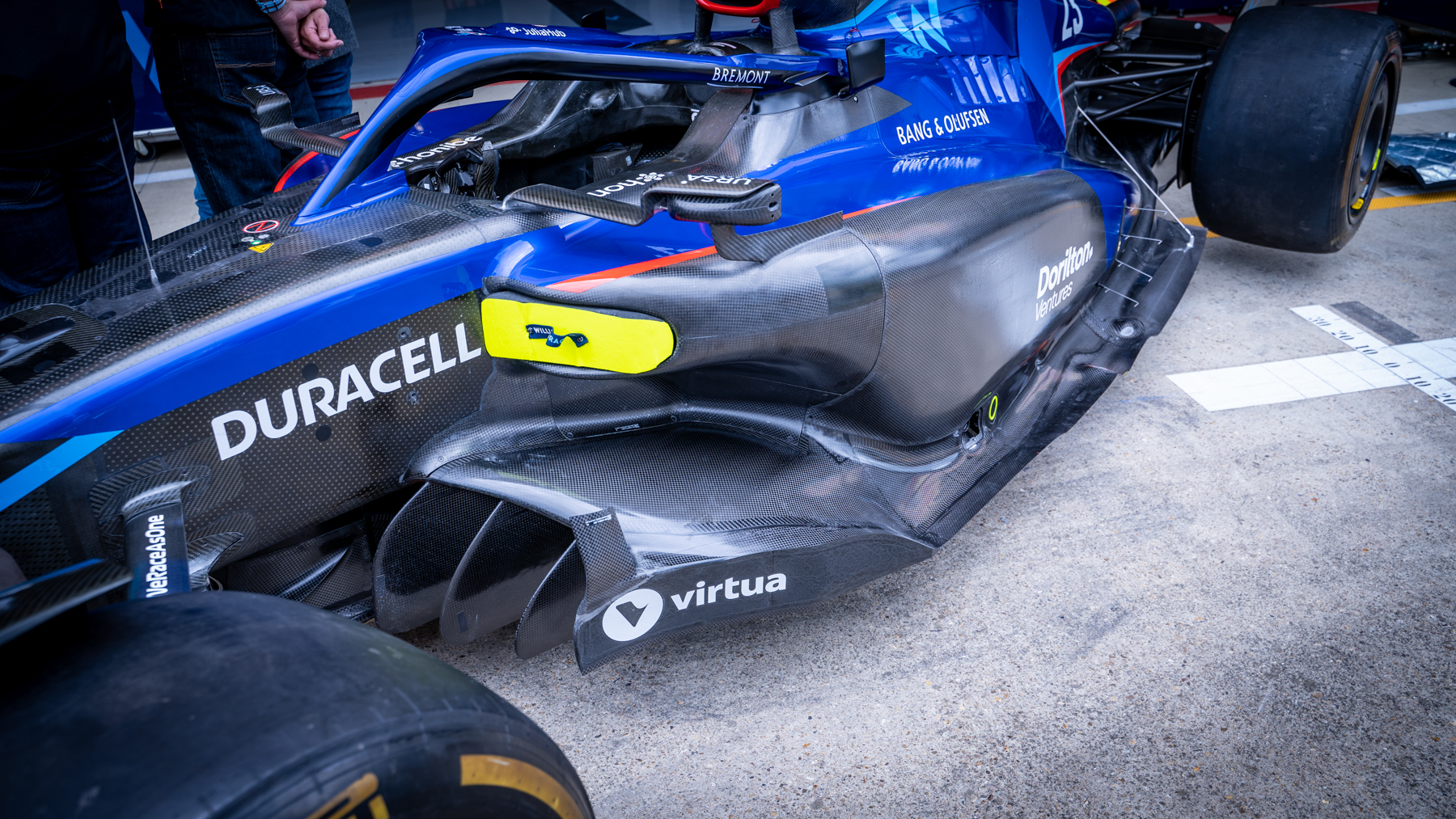 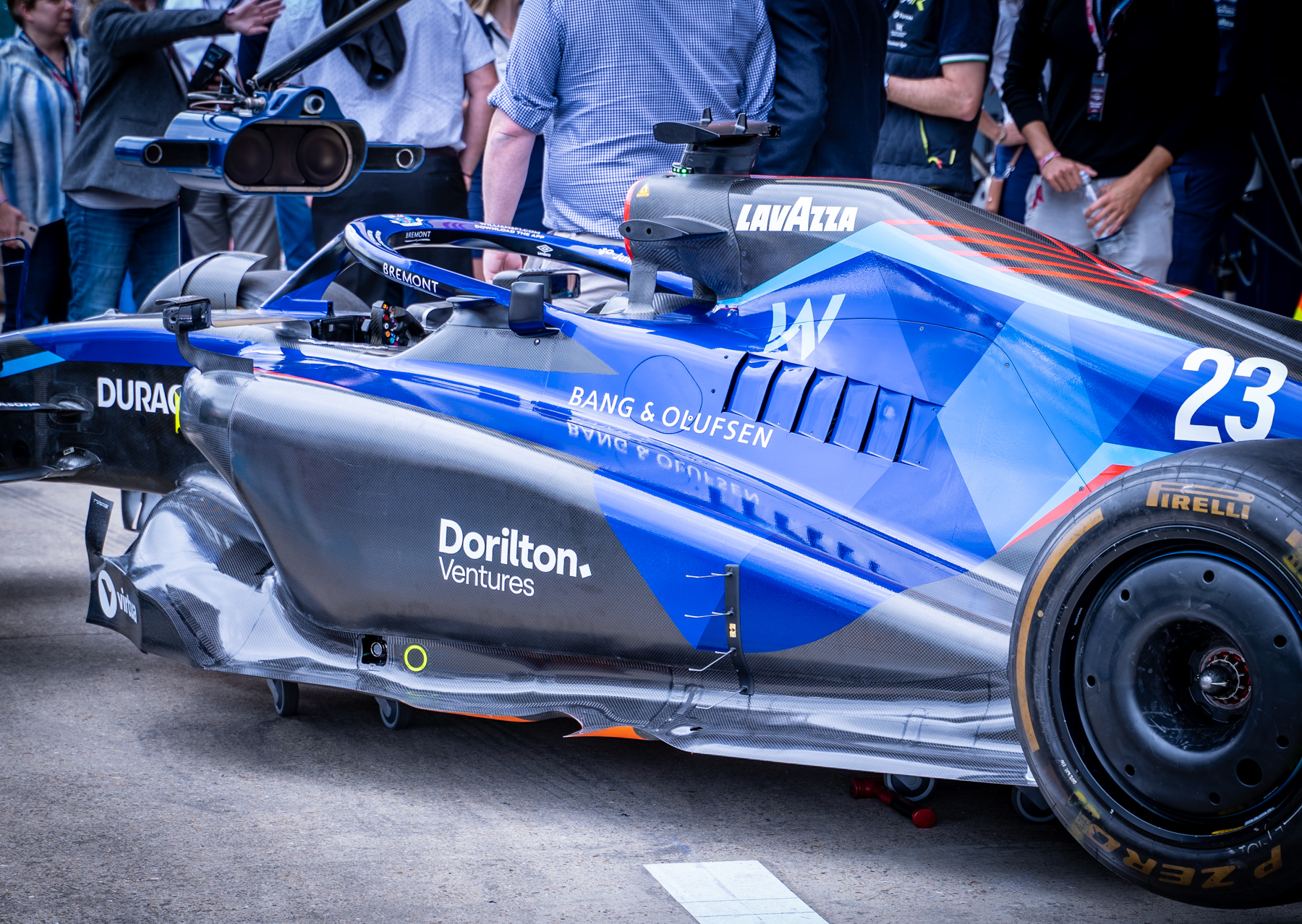 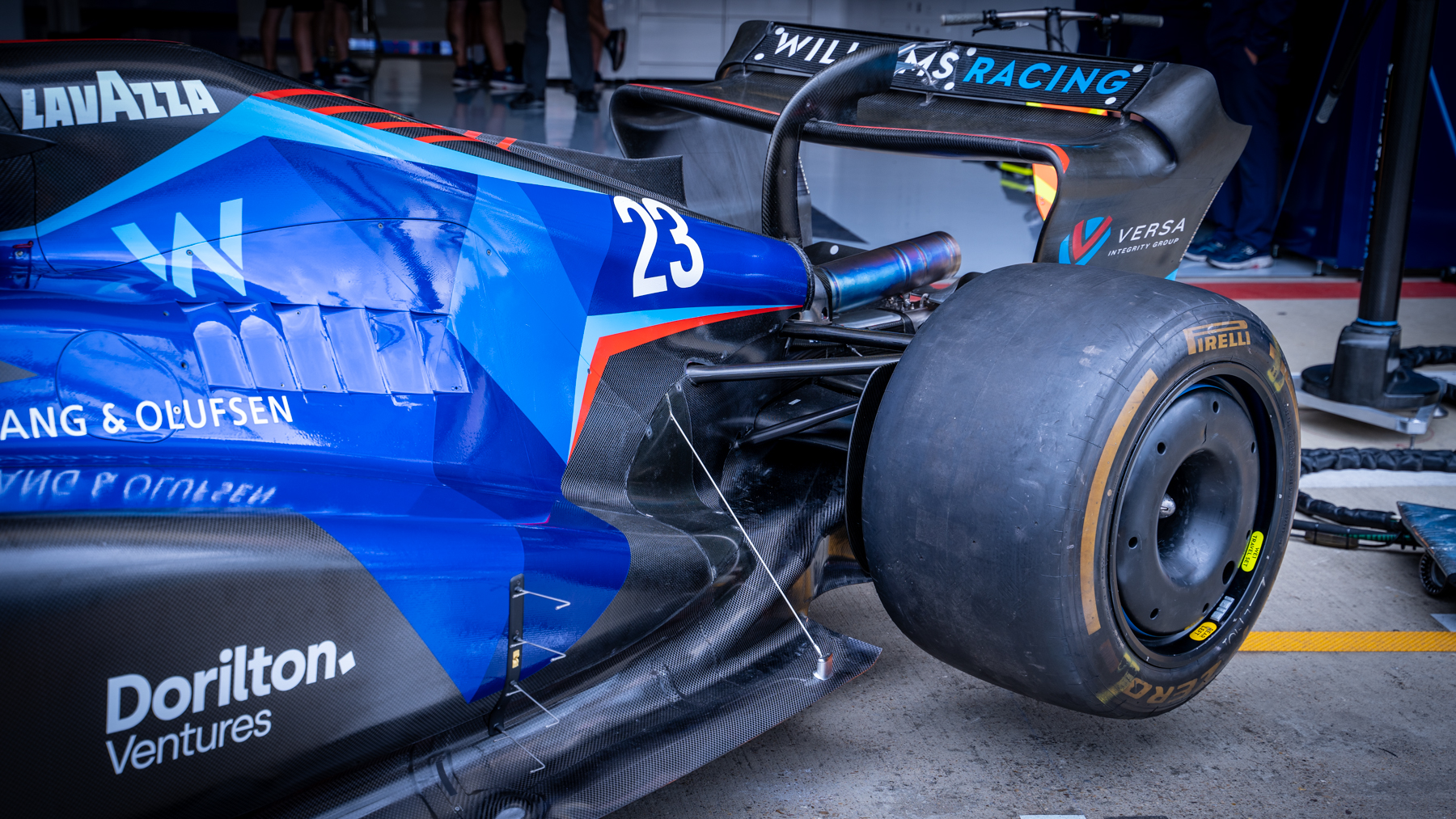 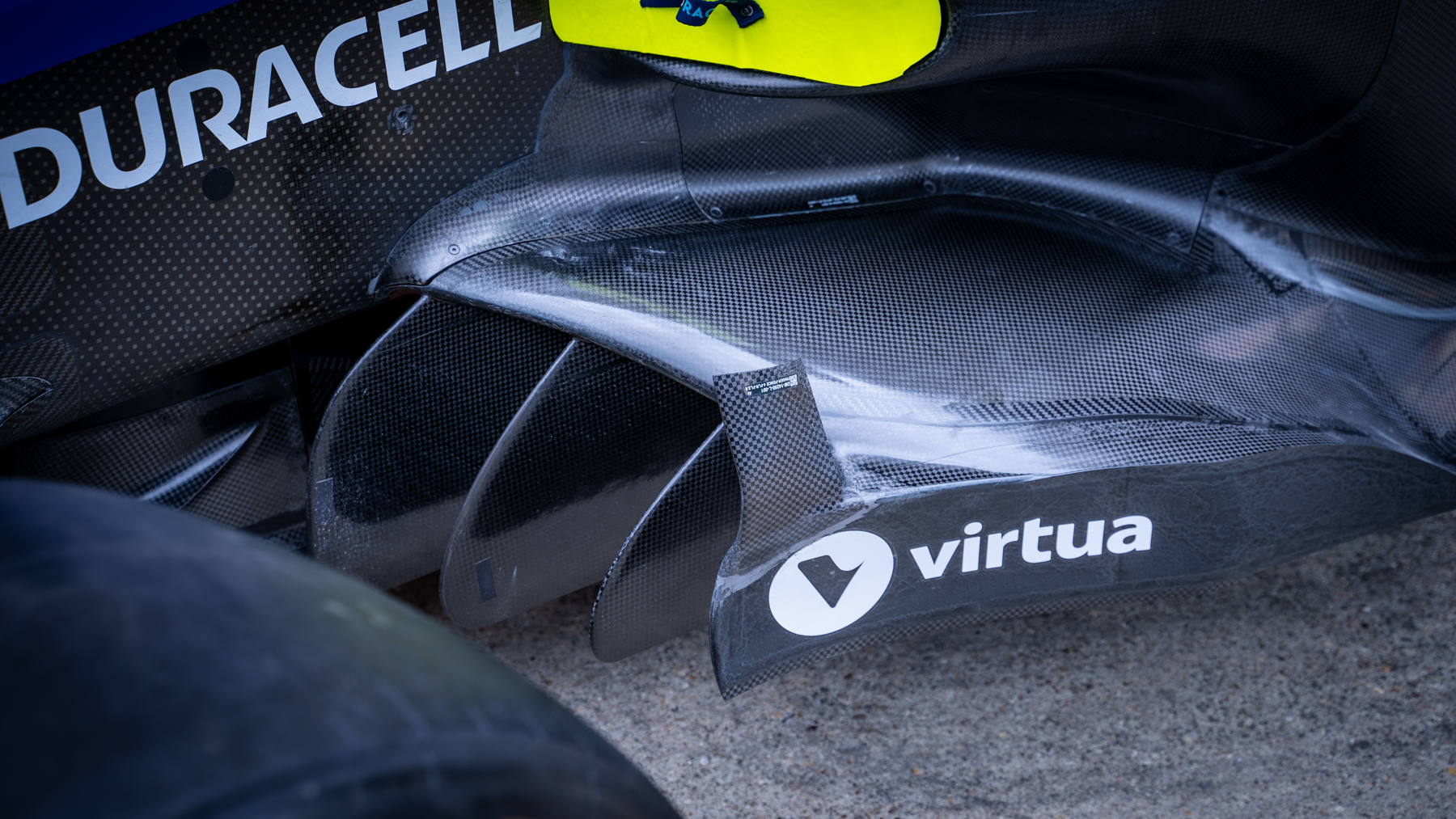 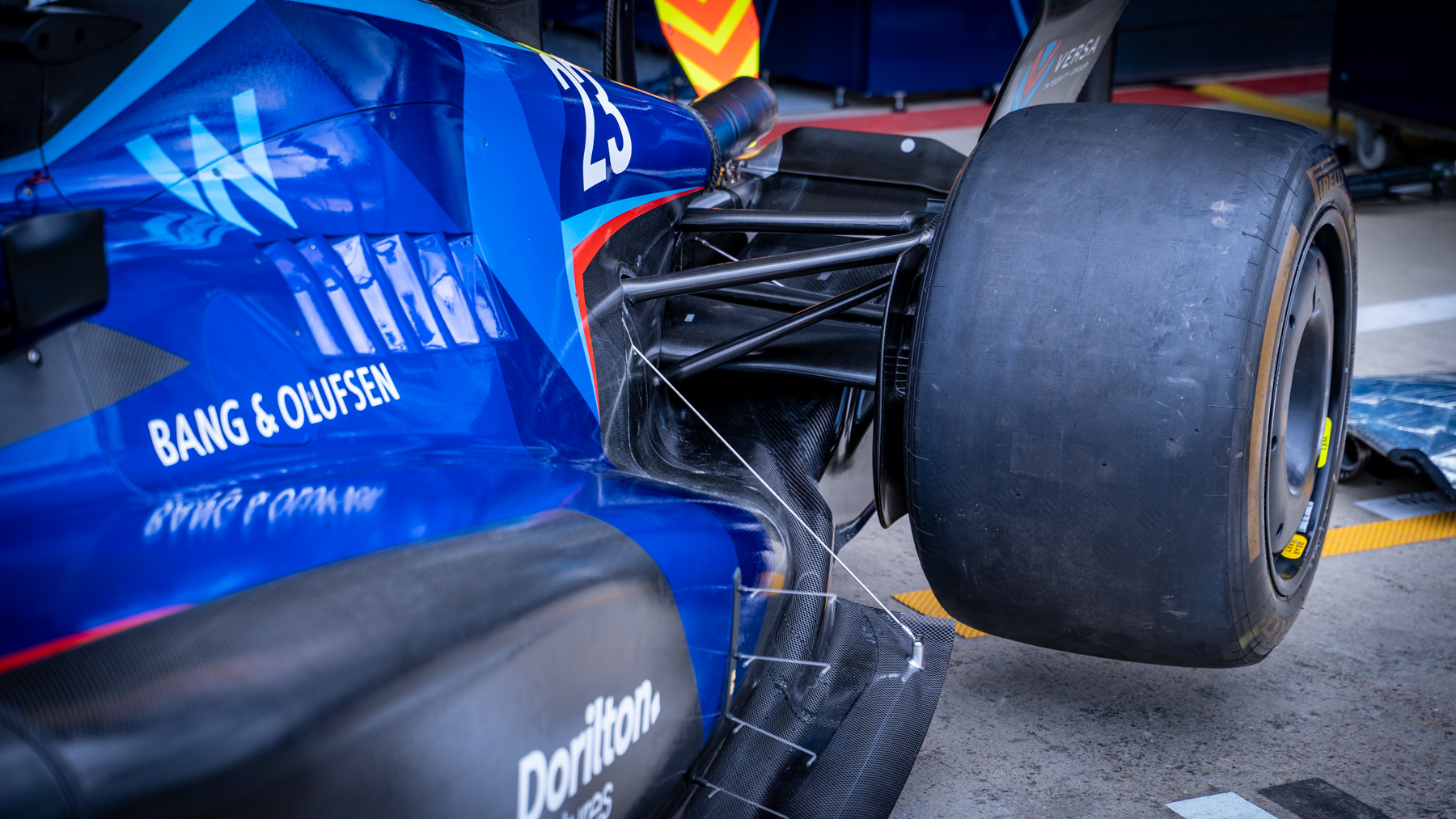 Rudimentary highlights in orange show some interesting shaping of the passage for air to the rear of the floor. Red Bull have structures in this area which artificially constricts this tunnel. Seems to me, unless I'm seeing things, that Williams are also attempting this by playing around with the thickness (arrow red, rough) of the most inboard floor strake to constrict the airflow and generate lower pressure zone here, to bring CoP forward
Top 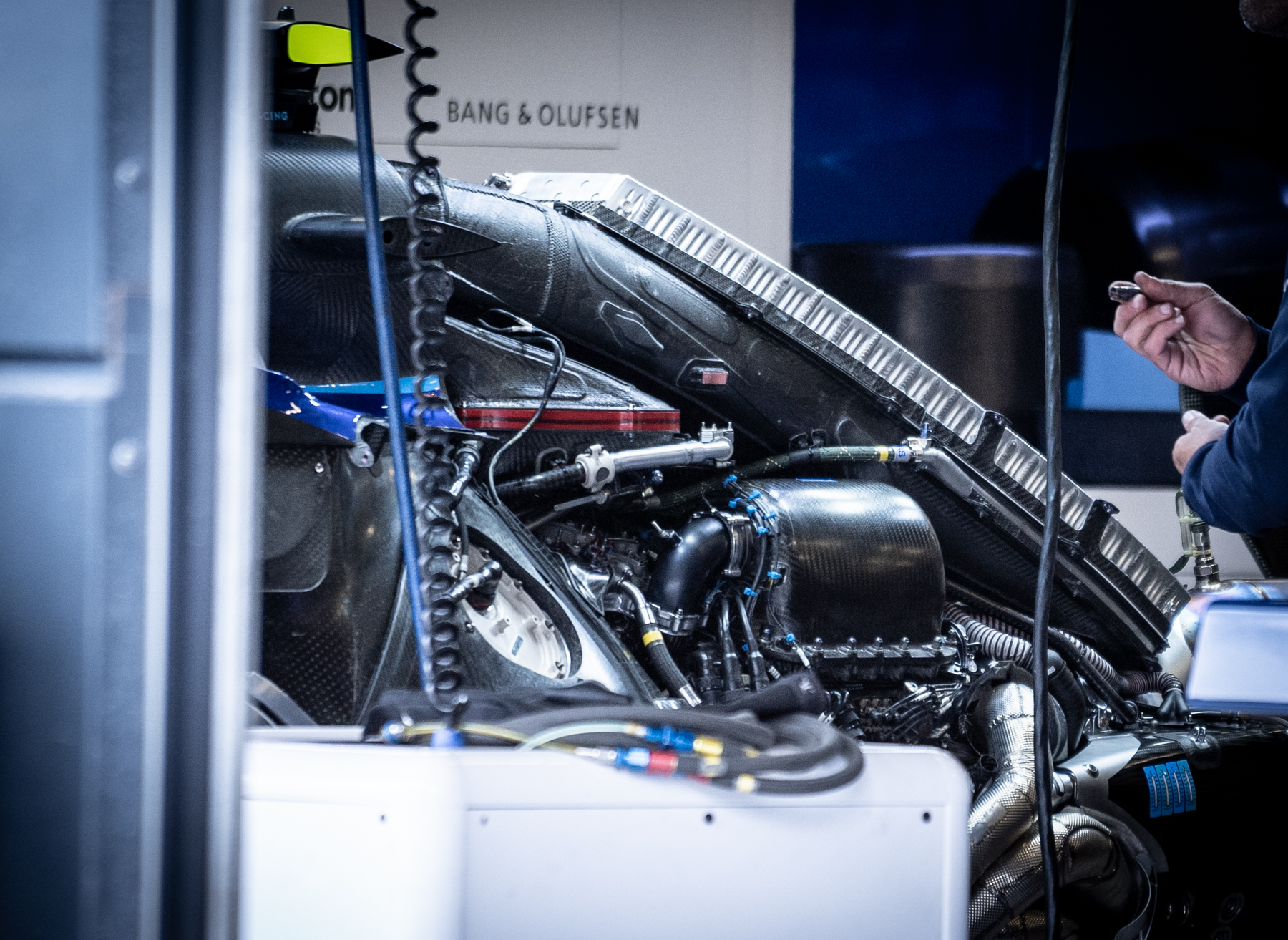 This seems to me like the same front wing. 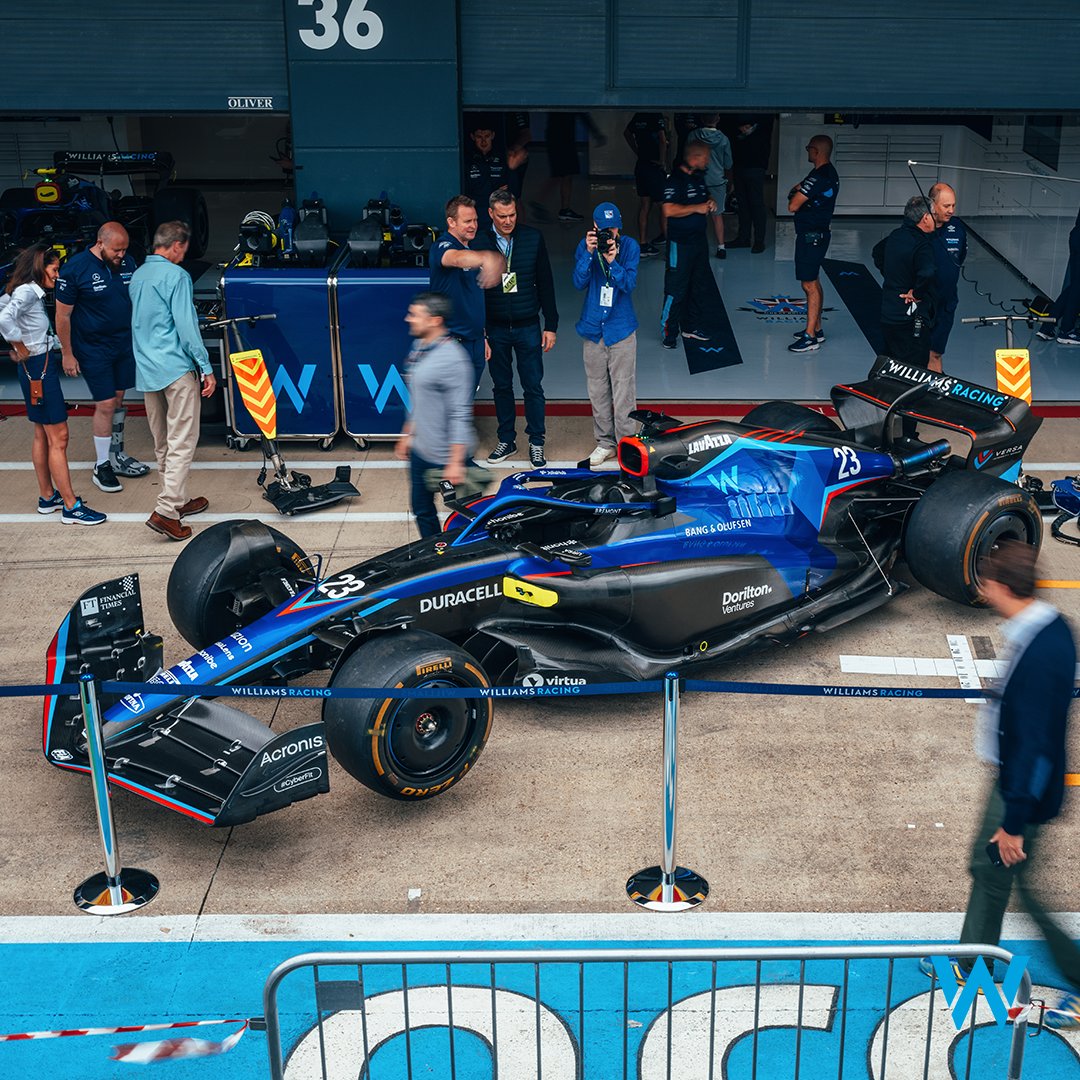 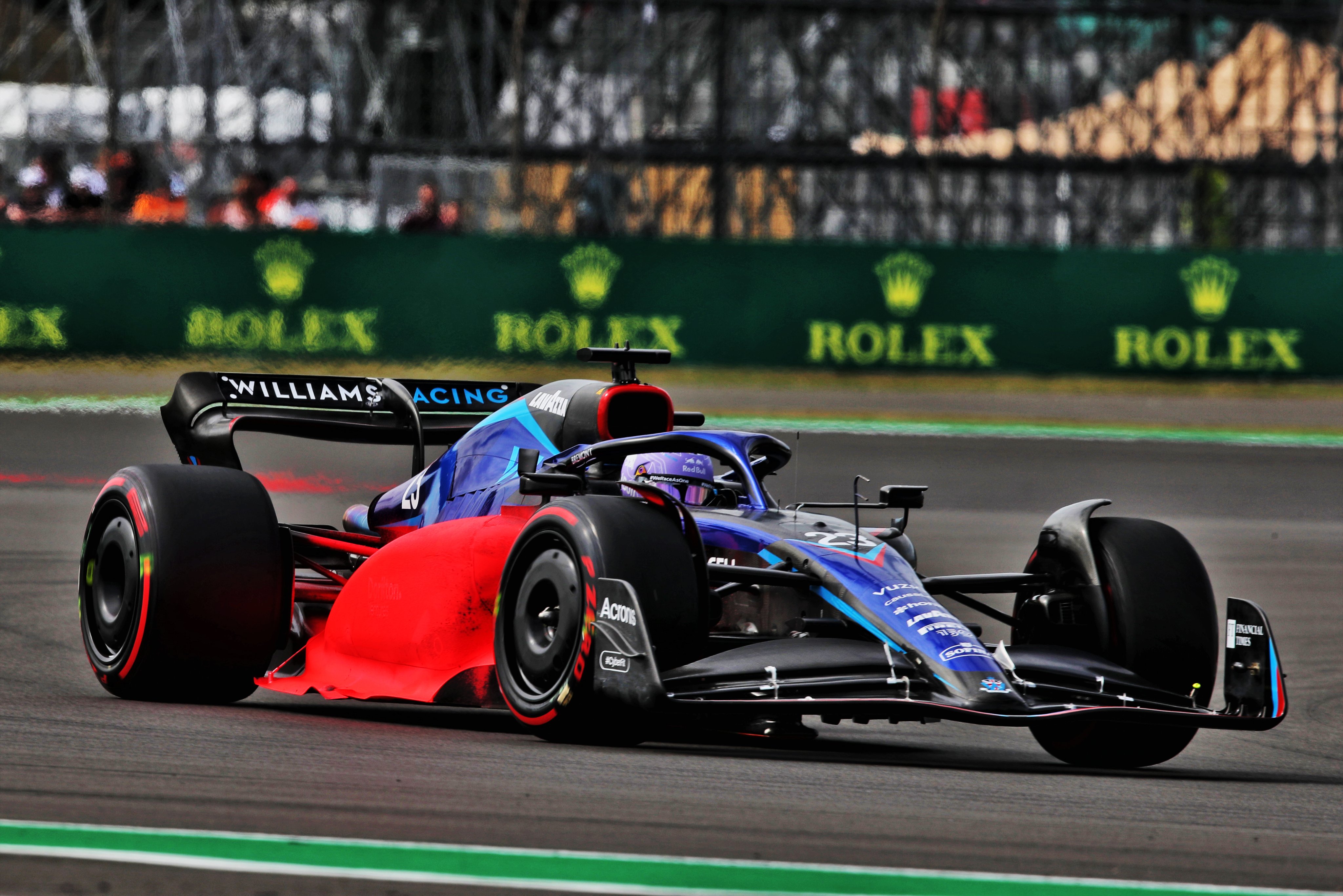 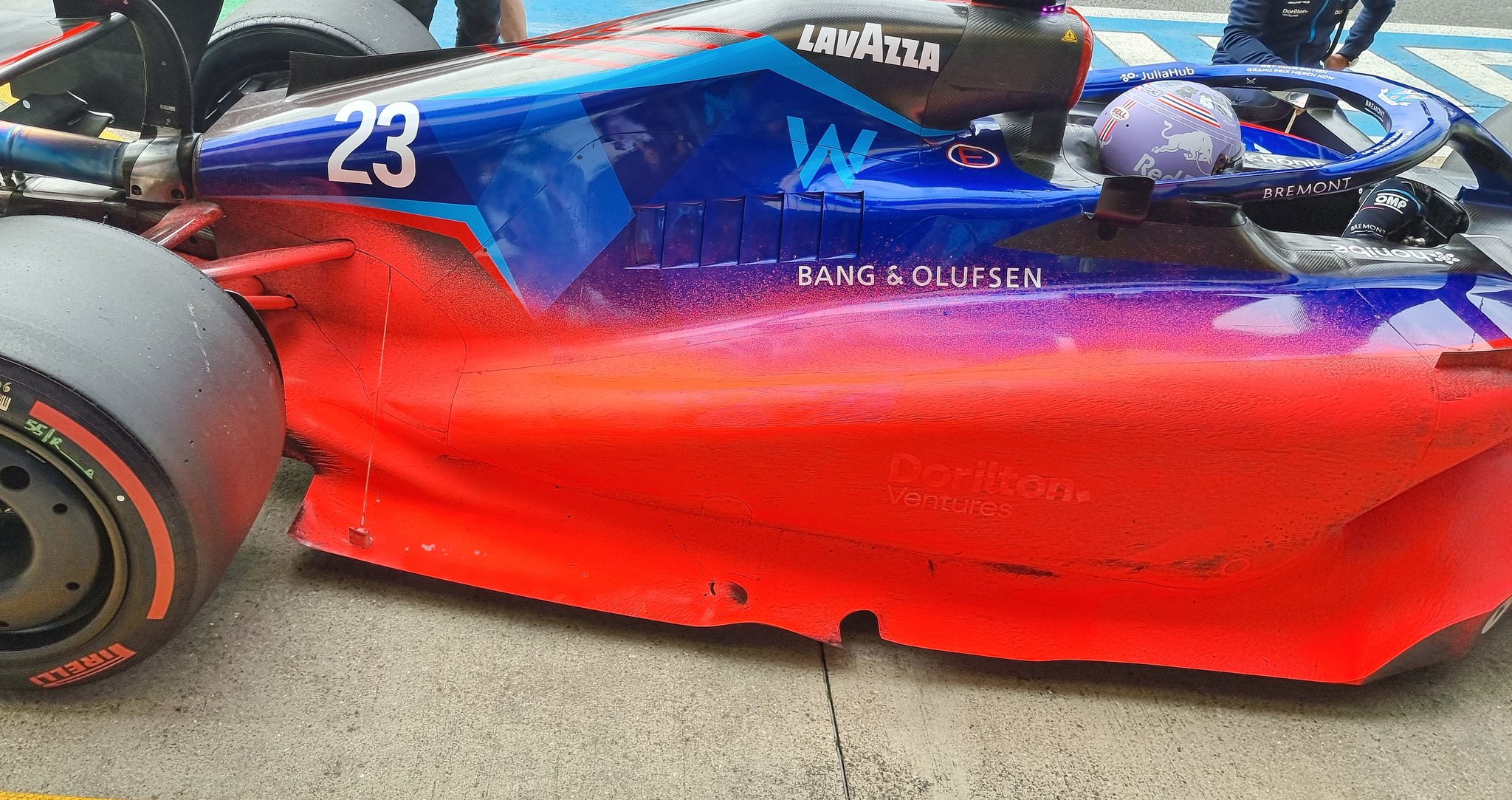 note a amall gurney flap at the hot air exit 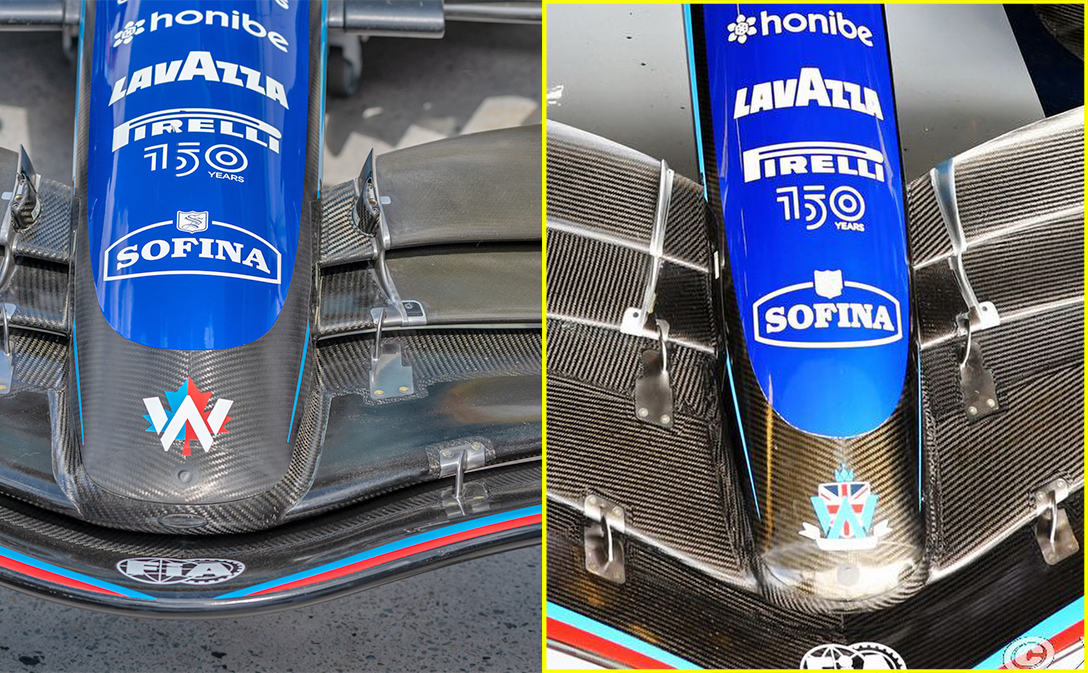 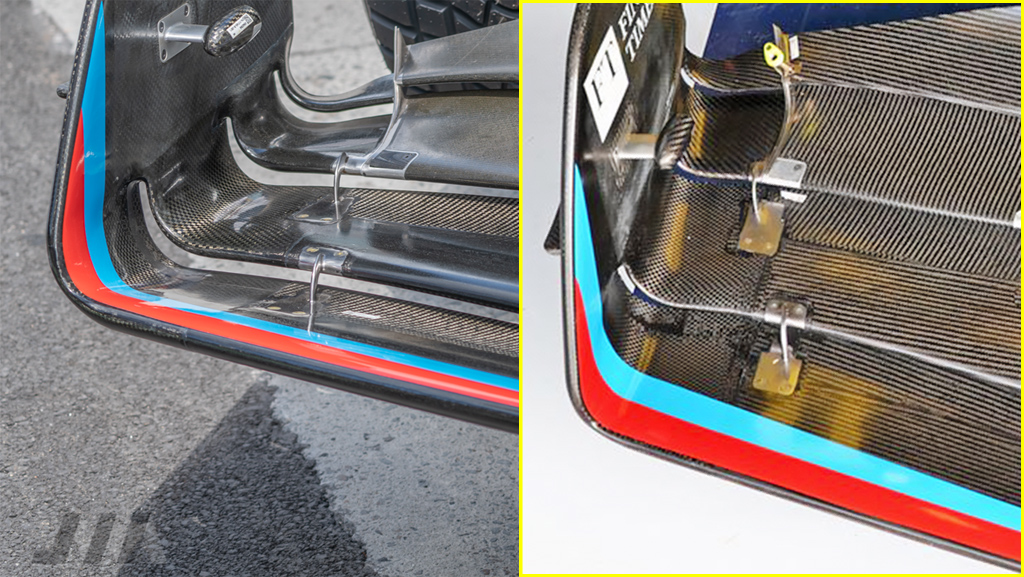 The adjuster has been moved from the inside to the outside of the front wing flap.
Top

Motorsport-Total.com has some quotes by Francois-Xavier Demaison, Williams' technical director, on the upgrade:

Williams has basically shelved its original concept for 2022. Alexander Albon was on the road in Silverstone with a completely modified car - albeit only a few metres in the race.

"We can really call it a new car because the list of parts we kept is much shorter than the ones we replaced," says technical director Francois-Xavier Demaison.

Williams had decided early on to move away from its concept, which was the weakest in the field. They watched the competition and then looked at what worked best - probably Red Bull's concept, which they borrowed from.

Williams' original concept was based on a low ride height, which was supposed to provide downforce. "But as soon as we wanted to go low and push the rear stiffness a bit, it was too complicated," says Demaison. "We wore out the plank and the drivers complained. So we said let's go the other way."

They have released a full article on the topic, which includes more information:


With the new design, it moves closer to the Red Bull side pod concept. However, the changes go beyond that - and it would be wrong to say that Williams simply copied because Red Bull is winning with their concept.

Rather, the upgrade at Silverstone is the result of months of work after Williams quickly concluded at the start of the season that its original concept was not getting the best performance out of the rulebook.
[...]
It was therefore decided to go in a different direction. But instead of rushing into action at the beginning of the year, Williams wanted to take their time and only bring something new when it had been fully researched - also by studying other cars.

"We are not so stupid not to look around and see what the others are doing. It took us a bit of time and analysis before we were ready because we didn't want to copy without understanding what we were doing. That's why we didn't see it until Race 10 because we wanted to understand the concept first."

Although the start for the new car has been far from ideal and there could be further delays after Albon's recent accident damaged many components, Demaison sees the Williams change as the start of a new journey.

"This is not the end of the story," he says. "We have many different solutions that have already been tested and we will continue with this concept. It opens many more doors, whereas the previous concept meant we were stuck."
"It gives you the opportunity to drive a softer car, with a higher ride height. You don't lose as much in the slow sections due to lack of mechanical grip or lack of downforce. And all of that adds lap time," the technical chief notes.

Williams' approach sounds pretty reasonable and well-considered. Definitely not a case of hastily copying the fastest car, because their own car wasn't delivering.
Last edited by Moctecus on Wed Jul 06, 2022 12:39 pm, edited 3 times in total.
Top

While I applaud them for the quick decision-making, that doesn't reflect well on their own technical capabilities.

(insert dude with his girlfriend, looking at another woman meme but title women as RB concept)
Top