Stu wrote: ↑
Wed Aug 24, 2022 9:23 am
I think that it probably fell foul of the number of surfaces regulation that has persuaded Mercedes to shape their side-pod/wing combo as it is. I thought that it was a very interesting detail in the car at launch.

I don't think that it does. The forward sidepod volume is a separate volume than the coke panel volume. It's this transition region that permits both the Merc mid wing and this Williams porthole. However, it does fall afoul of the coke panel minimum cross sectional radius and continuity rules. It gets around this by exploiting the louver allowance, imo.

It does seem to fall within the louver aperture allowance zone (compare to Renault in jpg below). Does it satisfy the requirements of a louver? I think it might, although it would depend upon how 'cooling flow' is defined.

b. For the sole purpose of allowing cooling flow exits, apertures may be added provided they lie within RV-RBW-APERTURE. The total area (per side of the car) of such apertures may be no greater than 150,000mm2. Furthermore, any apertures added must be arranged such that, when viewed from above, no part of RS-RBW-APERTURE may be visible through the aperture and any underlying part of the car exposed by application of an aperture must lie no further than 50mm normal to the untrimmed surface.


No more upgrades for FW44
Williams was surprisingly able to score points in Belgium. Chief Engineer Dave Robson explains the reasons for the increase in shape. The Briton also reveals why the car is so vulnerable to gusts of wind and what the further development plan for the FW44 looks like.

Not ideal that they have these wind problems plaguing them again.. something they keep designing into the car. Hopefully it's not baked in

Also no special Monza wing, so Albon's wing used at Spa will probably be brought out again, so on straights others will get closer.
Top

Regular vs the new low downforce single element beam wing run back-to-back today.
Williams say, "[t]his wing was previously available and declared for Spa but was not fitted to our car at that event." 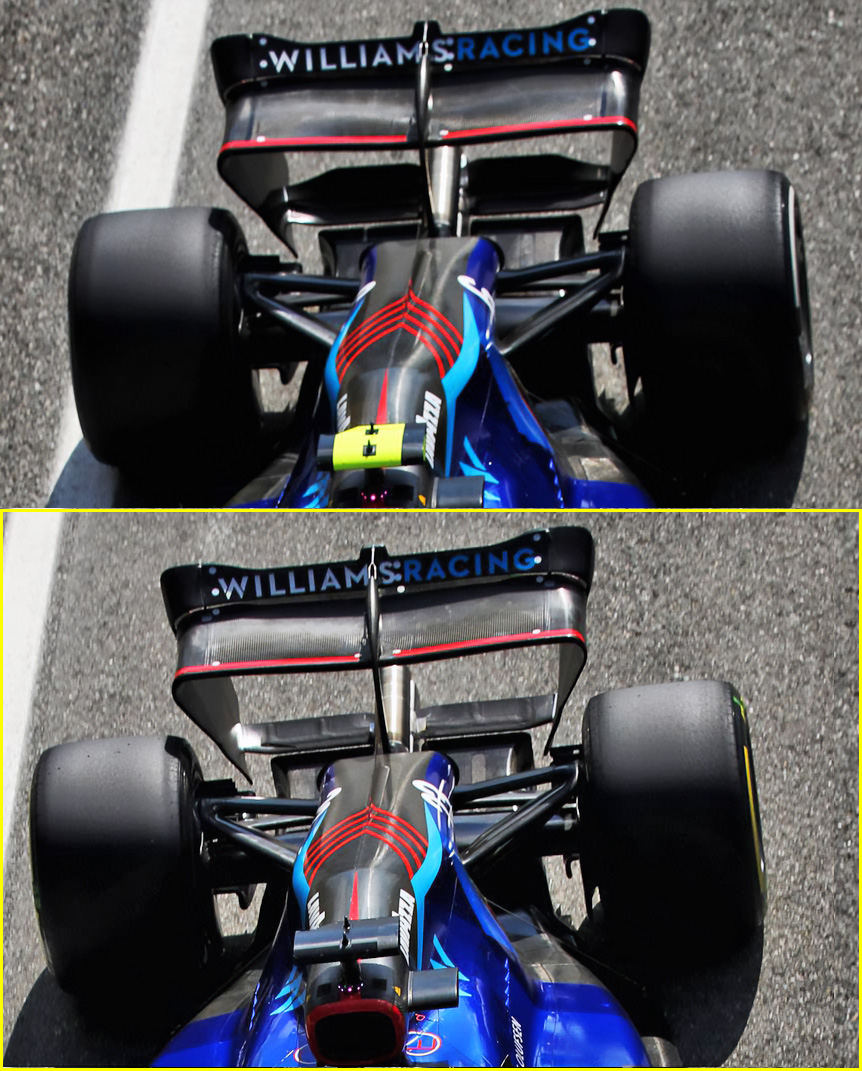 I don't know if it's only my observation, but is the Williams rear wing very flexible on the X-axis? Looking at the slow-mo replays of De Vries's car, the wing seems unrigid, especially during fast left-right sections like Variante Ascari. It just stands out compared to the rest of the grid. I'll try to provide a GIF
Top

Well, that's the end of another uncompetitive Williams... Hopefully (but not too realistically), I hope that the FW45 brings us into the midfield, not 'just' outside most times.
WilliamsF1 fan since 1989
Top

Mr Brooksy wrote: ↑
Tue Nov 22, 2022 11:10 pm
Well, that's the end of another uncompetitive Williams... Hopefully (but not too realistically), I hope that the FW45 brings us into the midfield, not 'just' outside most times.

Their new/current technical director FX Demaison joined the team too late to have an impact on FW44, so FW45 will be the true car designed under his leadership. Fingers crossed they are going to do better next year.
"A fool thinks himself to be wise, but a wise man knows himself to be a fool."~William Shakespeare
Top
398 posts